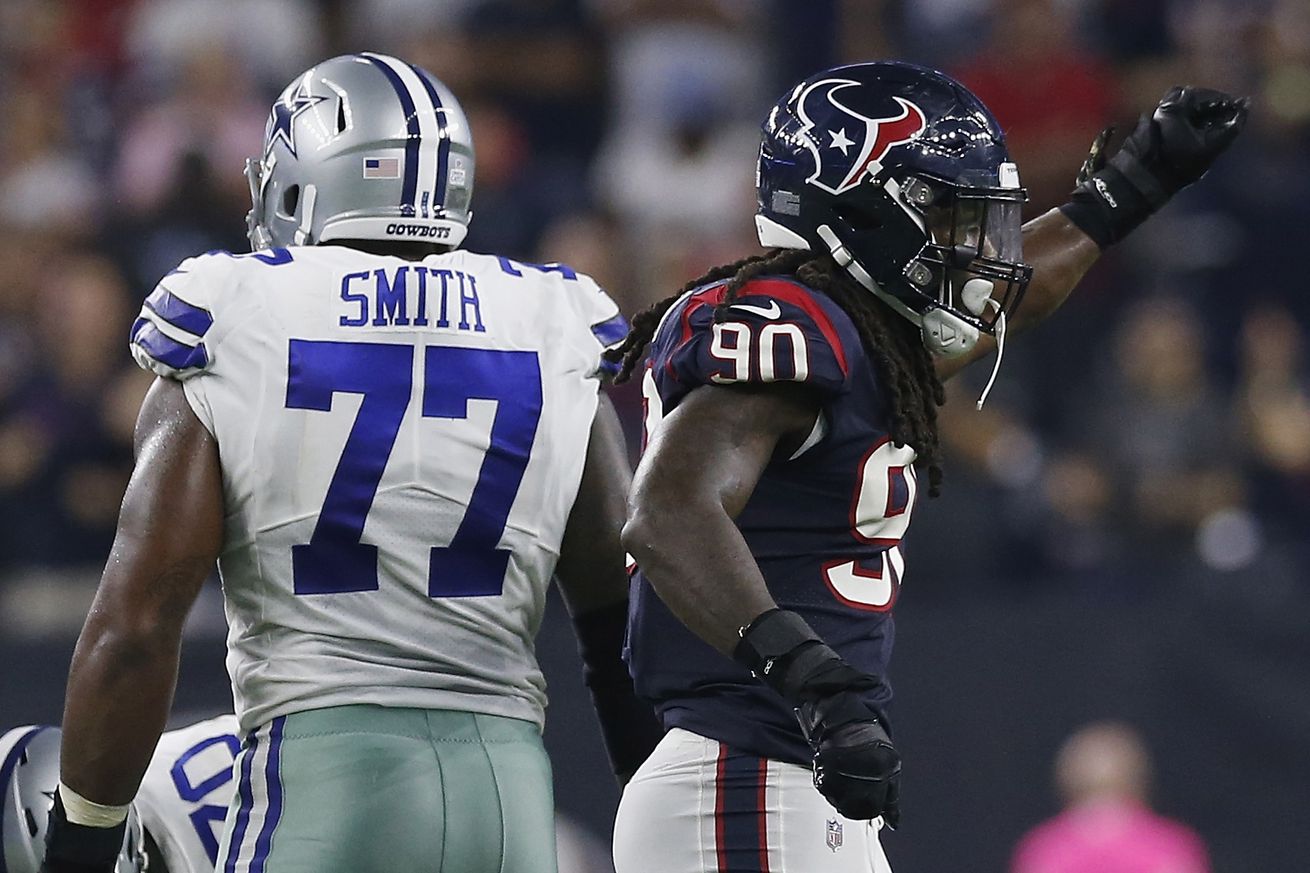 Step right up and read the latest Cowboys News!

Looks like this rumor isn’t going to amount to anything.

That brings me to the other challenges for a possible Clowney-to-Dallas scenario, and ones not being discussed with every eye-grab of a headline that finds a way to tie both sides together.

The added issues are roster-based, which is to say the team looks markedly different on the defensive line than it did three months ago when they already has no interest in an expensive Clowney. The aforementioned signing of Poe and McCoy bolstered the front in a big way, and rolling the dice on Aldon Smith has paid off — at least thus far — with the former All-Pro having been reinstated to the league for this coming season. The Cowboys then used two draft picks in April, one to grab Neville Gallimore and the other on a hyper-promising edge rusher in Bradlee Anae, and the expectation remains Randy Gregory will follow Smith in receiving reinstatement approval this summer from league commissioner Roger Goodell.

And for his part, in an exclusive talk with CBS Sports, Gregory noted he’ll be “back for good” this time — the new collective bargaining agreement aiding him in that mission.

As it stands, a separate source confirms he has officially applied, and is simply waiting on a verdict. The source added that the delay appears to be more red-tape based than anything that hints at a negative outcome for Gregory, but time will tell one way or the other. Assuming Gregory is back as expected, he’ll rejoin a team that now also boasts All-Pro talent in McCoy and Smith opposite DeMarcus Lawrence, and a promising rookie in Anae, along with the return of locker room and on-the-field leader Tyrone Crawford.

Do the stars of the Dallas Cowboys need preseason reps? – Brandon Ladd, The Landry Hat

Yes, the players need their reps because they are learning a new scheme.

There isn’t much science between preseason performance and the beginning of the regular season for players, there are way too many moving variables to get an accurate forecast. But there might just be a placebo effect that the Cowboys want going into 2020. One that they discovered during 2016 when Prescott took America’s Team by storm.

Also, in 2016, Elliott was just a rookie in the NFL, a few weeks before his stardom would take off and he would average well over a 100-yards rushing per game his rookie campaign. Elliott got seven carries in the third preseason game and went for 48-yards. The most memorable moment was the rookie back running over Seattle Seahawks Safety Kam Chancellor during the first quarter.

There was a lot of positive energy from that preseason game, despite the Romo injury. The energy that carried the team into the season, also the energy that gave the team an improbable 11-game win streak after a hiccup to the New York Giants Week One of 2016.

This could be the biggest battle of training camp.

Frederick is retiring after seven seasons with the Cowboys, including a successful, Pro Bowl return from Guillain-Barre syndrome in 2019. He decided it was time for the “next chapter of life” after a self-described “difficult” year trying to reach his high standard of play. The Cowboys have placed him on the Reserve/Retired list and will spread out his $11 million salary cap hit over two years.

Who replaces Frederick? That remains to be seen. The Cowboys have been in this situation before when Frederick spent the 2018 season recovering from GBS. Among the candidates this time around: fourth-round draft pick Tyler Biadasz, also a former Wisconsin standout, and veteran Joe Looney, who filled in for Frederick in 2018.

In 2018, the club also made an in-season switch at offensive line coach, promoting former starting right tackle Marc Colombo to replace Paul Alexander. But with head coach Mike McCarthy now in charge, the Cowboys have hired one of McCarthy’s long-time assistants, Joe Philbin, to oversee the position.

Film room: 2 positions the Cowboys need to improve in 2020, including a potentially huge weakness on the O-line – John Owning, DMN

Looking for improvement along the offensive line.

Connor Williams has had a bumpy start to his Cowboys career since being drafted in the second round of the 2018 NFL draft.

He’s shown some real progress with his size and play strength, and he’s proved to be very comfortable climbing to the second level and blocking in space, but he has struggled to stay healthy (eight games missed in two years) and play at a consistently high level since entering the league.

For the first time in his career, Williams is going to be pushed by a similarly aged and talented offensive lineman in 2019 third-round pick Connor McGovern. Before La’el Collins signed an extension, it was believed that Williams was going to replace him at tackle once Collins hit free agency, clearing the way for McGovern to win the left guard position.

However, with Collins’ extension and All-Pro caliber play last season, McGovern is going to have to beat out Williams the old-fashioned way to win the job.

The possible unexpected effects that no fans in the stands could have on a Cowboys season – Tom Ryle, Blogging The Boys

Hey, it will be a little weird at first but we’ll still have football… hopefully.

This might also lead to better officiating. The zebras are human, and it is impossible for them to be completely immune to the reaction of the crowd. There have been many times we all suspect a flag was thrown or stayed in the pocket because they didn’t want to face the wrath of the fans. Now that will no longer be a factor. It should lead to more impartiality during the game as well as just an overall better focus on the applicable rules.

Those are all things that might make the game more enjoyable for the vast majority of fans that don’t attend the games, but there are likely downsides as well. The excitement at home may be tempered a bit by not having real crowd noise, just as obviously canned laugh tracks tend to make some comedies less fun to watch. Some announcing crews may not be as good as others in conveying a sense of excitement and engagement without that crowd noise to feed them as well. It is interesting to note that the NBA is not going to have the announcers for their bubble games at the arena, but covering things remotely. The NFL may elect to do the same.

If the stadiums are empty, there will surely be restrictions or a complete elimination of post-game interviews, at least in person. The media may not be allowed in the stadiums at all and reduced to covering the games from their TV screens. Some kind of remote interview process will probably be introduced. We don’t know how that will go or if it will have its own effect on the coverage.

Is WR CeeDee Lamb an Offensive Rookie of the Year Lock? – Brian Martin, Inside The Star

Lamb clearly landed in the best possible place for this to happen.

Most analysts have CeeDee Lamb outside of the Top 5 as it pertains to who wins Offensive Rookie of the Year. As you can see BetOnline currently has him with the seventh best odds as does Sport Betting Dime. Pro Football Focus has him even further down the list at No. 8. Still, I think he has a better chance than people are giving him credit for.

Other than Cincinnati Bengals shiny new quarterback, Joe Burrow, no other rookie within the Top 10 should be considered a full-time starter. Every one of the running backs look like they will be in a timeshare as rookies, as does the wide receivers. To me, that gives CeeDee Lamb just as good a chance as anyone else in my opinion.

Sadly though, history is working against CeeDee Lamb. Only three WRs have won OROY in the last 20 years and only nine total have ever won the award. This is an award that has been heavily dominated by RBs (34) and QBs (10). No tight ends or offensive lineman have ever won.

While history suggests CeeDee Lamb virtually has little to no chance of winning OROY, I think the situation he finds himself in increases his odds. You may think being third on the depth chart with the Cowboys hurts his chances a little, however, I think the opposite. He is going to see some really favorable matches playing with Amari Cooper and Michael Gallup.

Their asking price is pretty high, not sure either team can afford to lose players.

General manager Howie Roseman — who employed Jets GM Joe Douglas as his vice president of player personnel for three seasons — isn’t afraid to make bold moves, and the Eagles could use safety help. Malcolm Jenkins left in free agency, leaving converted corner Jalen Mills, veteran free agent Will Parks and fourth-round pick K’Von Wallace to attempt to fill his shoes. Adding Adams to a secondary that upgraded at corner via the trade for Darius Slay would take Philadelphia to another level. The only caveat is that salary cap considerations could make this one tough to pull off.

Those salary cap considerations are real, but we’ve seen Eagles executive Howie Roseman make magic with money and the cap sheet before. If Philadelphia truly wants to land a player, money rarely gets in the way of a deal.

Trading for Adams would go against 18 years of the Cowboys more or less deprioritizing the safety position — Jerry Jones hasn’t selected a safety in the first two rounds of the draft since making Roy Williams the No. 8 overall pick in 2002, nor has he paid record-setting money for any player at the position. Simply put, the Cowboys appear to believe other roster spots are more worthy of investment. However, if that approach changes and the team sees fit to grant Adams his apparent wish to come to Dallas, Adams would answer the prayers of a fan base frustrated by the lack of difference-making play at this spot on the field. That said, it is legitimate to question the ultimate impact of even the best safety relative to, say, quarterbacks, receivers, running backs or pass rushers. As for Adams, I’m sure he would love to head to a Super Bowl contender that also just happens to play in his hometown.

Hypotheticals are always fun. We discussed a few on the latest episode of Girls Talkin’ Boys.