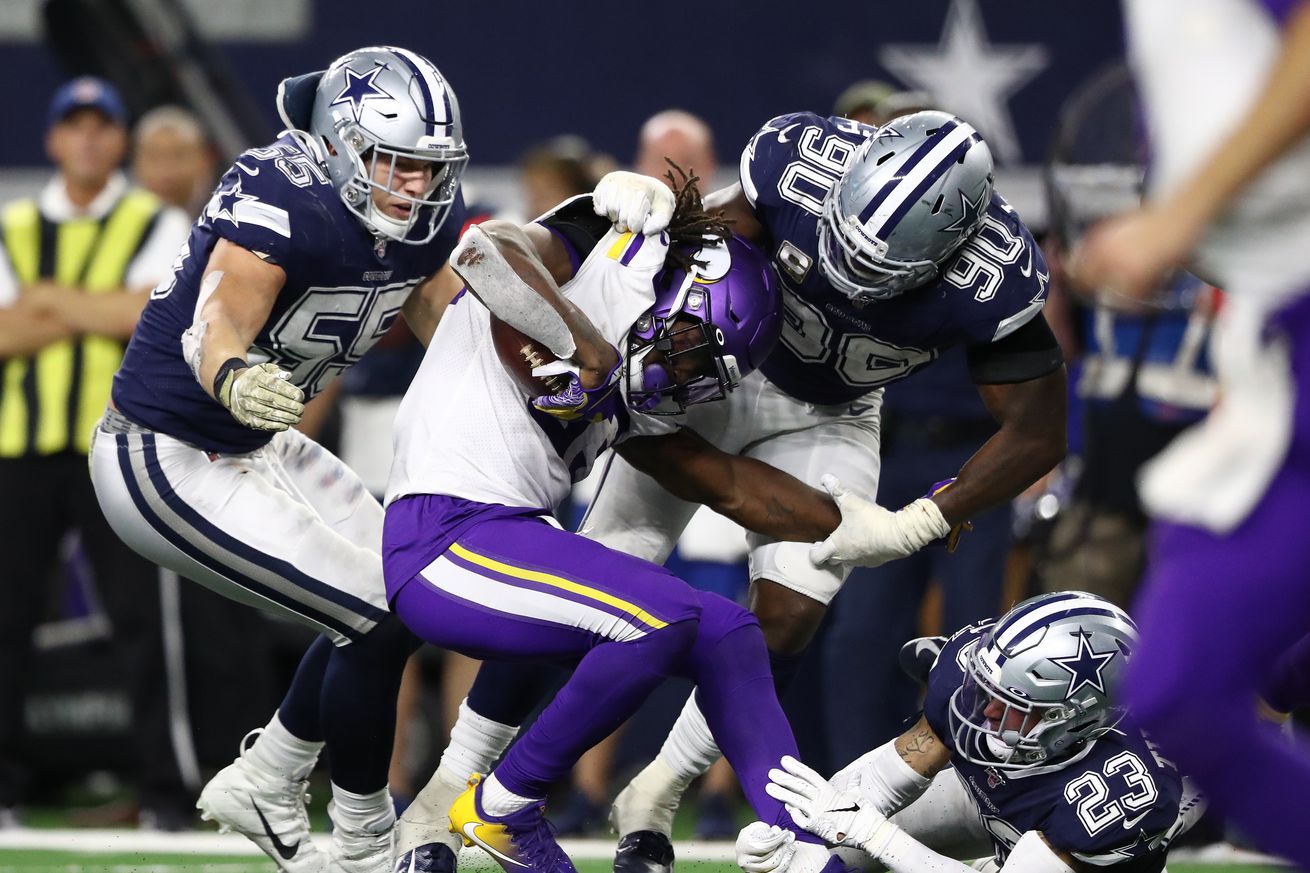 Extra, extra read all about the Cowboys latest news here.

The debate rages on as to who is the better corner, Anthony Brown and Jourdan Lewis.

No matter who you think is the superior player, one thing that I’ve learned through this process is that the two are much closer than the other side’s fans will lead you to believe.

Interestingly enough, I came into this exercise thinking that Brown would be the victor. However, after watching every single snap from the past two seasons, I think Lewis is the better overall player — by the slimmest margins.

In 2019, while Brown performed adequately before a torn triceps ended his season, Lewis was the better player for most of the year. However, a troubling two-game stint against the Buffalo Bills and Chicago Bears undid a lot of the great work Lewis put in earlier in the season. In those two games, Lewis allowed 12 catches (on 13 targets) for 196 yards and two touchdowns; yet, in the other 14 games combined, he allowed just 28 catches (on 44 targets) for 349 yards and one touchdown.

Lewis has higher highs and lower lows while Brown is more consistent in maintaining his level of play. They both possess intriguing position-flex, as Brown can play slot or outside while Lewis can play in the slot or in the box as a dime linebacker who matches running backs out of the backfield.

Are Cowboys Up to the Challenge of Playing a Hybrid Defense? – Mauricio Rodriguez, Inside The Star

If you think about it, are any defense truly playing a 3-4 or 4-3 defense?

Playing with a hybrid defensive front brings defenses a lot of advantages, although it’s not an easy task. Bill Belichick has been one of the game’s biggest innovators in this aspect when he started playing both defensive styles and switch from one play to another. He managed to do it with a versatile roster.

The biggest issue for the Cowboys in 2020 might not be in the defensive front, for they seem to have the pieces to do it. But as 3-4 defenses focus on getting enough pressure on the quarterback, the defensive backfield must be ready to be solid in coverage.

Headed into their first year without Byron Jones, the Cowboys have a lot of unproven players at cornerback and at safety. Hybrid defenses need cornerbacks who play well in man-to-man coverage and safeties who can handle tight ends and slot receivers. Is the Cowboys’ defensive backfield ready for that?

Cornerback Trevon Diggs is promising, but he’s a rookie after all, and Safety Ha Ha Clinton-Dix doesn’t seem like much of an upgrade over Jeff Heath, who played average football at best. We’ll have to wait and see to know who will step up on the Cowboys’ defensive backfield.

Dallas Cowboys: Why Ha Ha Clinton-Dix might end up being the best move – Kenneth Wilson, The Landry Hat

Maybe not the best move, but maybe the second best move on defense.

With a total of 16 across his career, he should immediately become the premier ballhawk on the Cowboys defense when the chances arise. His playmaking and willingness to take risks is the exact opposite of what will probably make him the best pickup though.

Even though the Cowboys have lacked and need that threat of having a backend of the secondary capable of picking opposing quarterbacks off at any moment, they most need consistency and someone they can count on from week to week.

They need a guy that through it all, turnovers, takeaways, or none at all, can continually line up and be a presence there. At the very least, be a guy who won’t ever let the random deep ball just casually fly over his head with regularity, as we have watched some of these Cowboys secondaries do over the past few years.

Dallas Cowboys: Why Trysten Hill may already be the odd man out – Reid Hanson, Sports Dallas Fort Worth

It’s a crowded field and Hill isn’t going to need to step up or he could be gone.

At the 1-tech the clear starter is Dontari Poe. Poe will do the dirty work inside incorporating some 2-gap and even playing NT in the 3-4. Antwaun Woods, if he ever signs his tender, is his primary backup. Woods is proven 1-tech and as a rotational piece, immediately makes this 1-tech rotation better than we’ve seen in years.

If Mike McCarthy stays true to his words there’s unlikely to be a spot for Trysten Hill. Now if Woods holds out and the Cowboys decide to move on, that opens a spot at DT. The only problem is it’s a different position Hill was being groomed for. Now if Hill can make the move to 1-tech that would be great. He has a tremendous set of skills to work with and if he can tap them and play motivated he’d be a great solution. But 1-tech requires a certain level of “ornery” that I’m not sure Hill possesses.

With so many edge players capable of kicking inside and playing DT on nickel downs, it doesn’t make much sense to go long at the 3-tech this season. It’s a numbers game and Hill appears to be on the outside looking in.

There was talk that Patrick Mahomes’ new deal might be set as a percentage of the salary cap, something that would have been a new precedent for QBs and could have impacted Dak’s negotiations. That didn’t happen.

One of the questions we had in response to the news of Patrick Mahomes‘ agreement on a 10-year extension with the Chiefs was whether the quarterback’s compensation will be tied to a percentage of the salary cap.

According to Adam Schefter of ESPN, the answer to that question is no. Per Schefter, the new money in the extension, which runs through the 2031 season, is worth $450 million and is not tied to the cap. As a result, Mahomes’ compensation will remain static even if the next round of broadcast deals keep pushing the cap higher over the course of his deal.

Mahomes is signed for this year and is set to play out the 2021 season under the terms of Kansas City’s fifth-year option. That option carries a salary of $28.4 million and his 2020 base salary is $2.8 million.

Schefter also reports that there is an injury guarantee of $140 million, but there are no other details about money guaranteed at signing or voidable years at the back end of the deal that could make it look quite different than it does at first blush.

I’m not sure Mahomes deal really hurts the negotiations for Dak, it just puts a cap on it.

“We all know one of the most important things in our lives is timing. And this is just horrible timing for Dak Prescott,” Johnston said in a recent interview with The Dallas Morning News. “Depending on how everything plays out moving forward, will he ever kind of reflect back and go ‘boy I should’ve signed that $35 million a year deal 12 months ago.

“One of the things that you’ve seen NFL teams be able to do is sign these contracts and bring in players because they anticipate that increase in the cap, and are we going to provide any special situations for COVID-19 in regards to a salary cap for professional sports? I would think not.”

Johnston believes the Cowboys might be hesitant to go much higher on Prescott’s salary due to unpredictable financial implications in the coming years. Signing Prescott long-term is a risk for Jones, he says.

“The last time I saw some of the numbers with if the NFL plays in front of empty stadiums, it was $5.5 billion in lost revenue with the Dallas Cowboys being the team in the NFL that was hit the hardest at $800 million. So their cap is definitely coming down,” Johnston said. “I don’t think it’s gonna be flat, there’s gonna be a negative impact on the cap.

Mailbag: Are We Writing Off Forbath Too Soon? – Rob Phillips, David Helman

Will there really be a kicking competition, or is it a foregone conclusion?

It seems like no one is giving Kai Forbath a chance to winner the kicker job. Why?– VINCENT VINCI / LAURENCE HARBOR, NJ

Rob: Because Greg Zuerlein, who played for new special teams coordinator John Fassel in L.A./St. Louis, agreed to a deal in March that includes reportedly over $2 million in guaranteed money. That’s a sizable commitment at kicker. But at the end of the day, it’s about making kicks. Year after year, the Cowboys play so many games decided by a touchdown or less. They’ve got to find consistency at that position, and yes, Forbath was perfect in the final three games last season. Let’s just see how it plays out on the field.

David: I think this is such an excellent point, Vincent. Rob is correct that the Cowboys committed a lot of money to Zuerlein, and he obviously has an existing relationship with John Fassel. But kicker is arguably the most result-based position in football. The ball either goes through the uprights, or it doesn’t. If Forbath is obviously better during training camp, nobody is going to care about the money.

Pat Mahomes has a new deal, and there are obviously thoughts to be had about Dak Prescott. Let’s discuss.