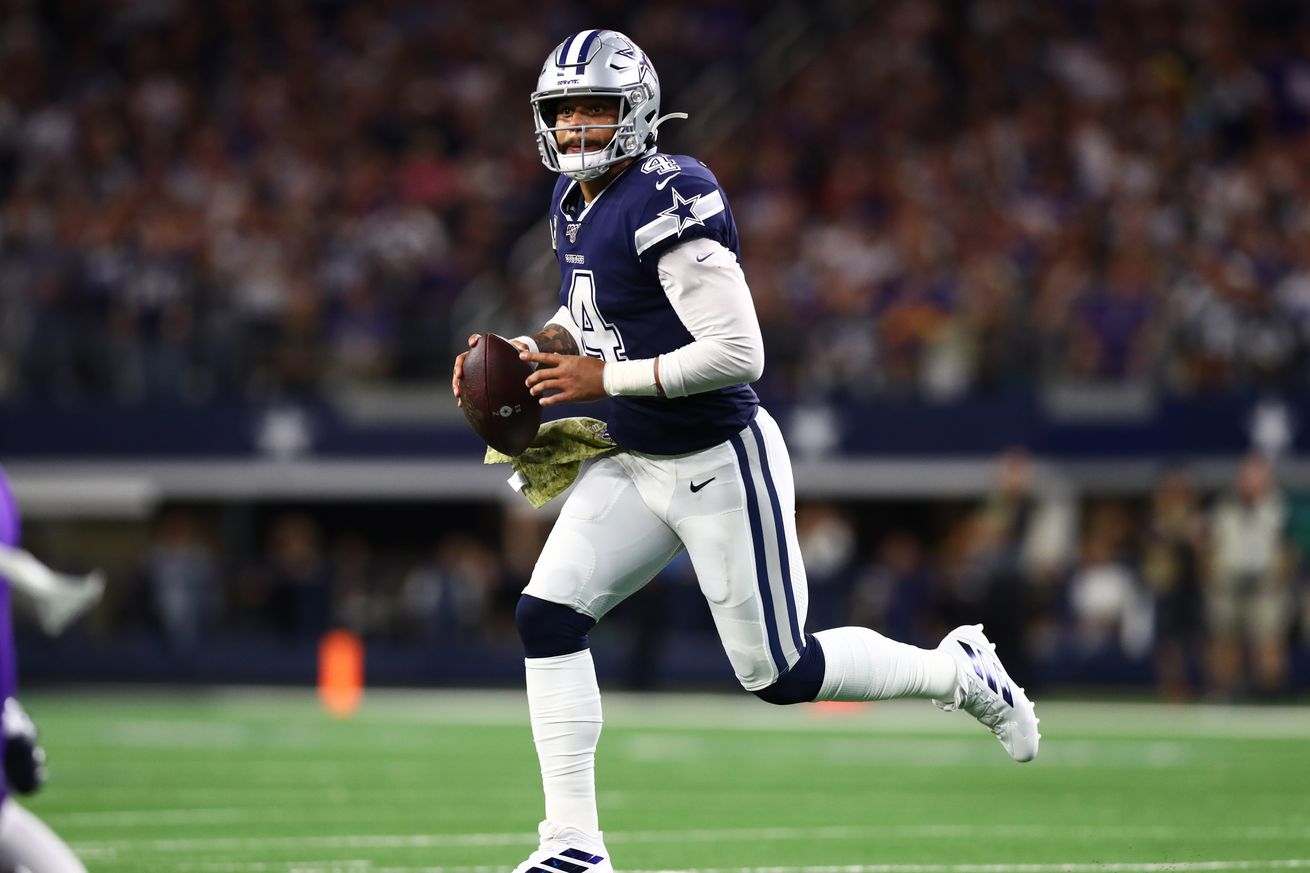 Just how much will Patrick Mahomes’ contract impact Dak Prescott?

The Cowboys should acquiesce to this for a couple of reasons. The first is fairly simple, because if Prescott plays on the current franchise tag and is faced with playing under a second in 2021, his salary for next season — absent a deal at that time — would balloon to more than $37 million. So in one way or the other, unless they shed Prescott (which they are absolutely not going to do), they’re facing, at minimum, a $37 million payout in 2021. It makes perfect sense Prescott would use Mahomes’ first five-year new money average of $39.55 million as the new ceiling he knows he won’t get, and the $37 million floor he knows he likely will receive, to land squarely in the middle at around $38 million annually.

And, for the sake of being mathematically thorough, even if Prescott sticks to his guns on a four-year ask, Mahomes’ annual average in the first four years of new money is $38.95 million. That means Prescott could still seek a bump from the current $35 million per year offer to $38 million annually and remain below Mahomes, which is where the Cowboys want to stay. For a Cowboys team that desperately did not want to set the market at QB, they can pay Prescott $3 million more per year than they initially intended and still take solace in the fact they didn’t kick open the moonroof, because the Chiefs already did it.

Additionally, the Cowboys would like to not take the brunt of a $31.5 million salary hit in 2020, knowing a long-term deal on Prescott — although the average annual payout would be higher — would likely yield a much smaller Year 1 hit, contingent upon how the deal is structured. This, of course, would allow them to at least entertain adding a big name like, say, Jamal Adams; if the New York Jets weren’t so currently disgusted by the idea of sending the All-Pro safety to the Cowboys, thanks to a toxic October and Adams doing himself no favors with his constant and very public stream of heart eye emojis being sent to North Texas.

3 moves the Cowboys should make, but won’t: Dallas can do without a traditional fullback on the roster – John Owning, Dallas Morning News

Which of these three moves would you most want to see the Cowboys make?

At fullback, Olawale doesn’t get to express those skills nearly enough. Instead, he’s forced to contribute mostly in an area where he provides middling (if any) positive impact: run blocking. Olawale isn’t a very good run blocker, evidenced by the fact that Dallas’ yards per carry in 2019 jumped from 3.57 with Olawale on the field to 5.02 with him on the sideline. The difference was even worse in 2018, when Dallas averaged just 2.25 yards per carry with Olawale on the field compared 4.83 yards per carry with him off.

Why have a fullback on the roster, especially when the incumbent isn’t even great at the trait (run blocking) that differentiates fullbacks from running backs? This is why the fullback position has gone the way of the dodo bird for most teams. If the Cowboys want to keep some run concepts with lead blockers, they can use a tight end in an H-back role to fulfill fullback responsibilities. This, combined with a robust pass attack, can create some issues for defenses because they won’t be able to predict where the tight end will line up. Sometimes it will be in-line or out wide, and other times it could be in the backfield.

That said, head coach Mike McCarthy has repeatedly kept a fullback on his rosters even though they barely played. In 2017, McCarthy’s fullbacks played in just 183 of the offense’s 1,048 snaps (17.5%). The Cowboys should do away with the fullback position. Odds are they won’t.

What’s the Holdup in Randy Gregory’s Reinstatement Request? – Jess Haynie, Inside The Star

After delaying for over a year as he worked on his personal life, Randy finally applied for reinstatement in March. While we never expected it to happen overnight, the fact that it’s still ongoing into July and with training camps not far away is raising some eyebrows. The perceived delay on Gregory is especially surprising since fellow DE Aldon Smith got a response back in May. We’re not sure exactly when Smith began the reinstatement process, but it was in the works when Dallas signed him on April 2nd and was granted on May 26th.

It’s important to remember, though, that these requests aren’t a simple matter of a one-time conversation between the player and Roger Goodell. There are medical testing procedures that take time to execute in addition with the personal discussions.

As with most of life during the year of 2020, everything is being disrupted by COVID-19. And while it may not be the fairest thing for Gregory and other affected players, they are a low priority right now compared to delayed training camp starts, Hall of Fame ceremony cancellations, and the elimination of preseason games.

Will Dak Prescott be with Cowboys for the long haul? Answer is near – Todd Archer, ESPN.com

Some questions and answers on the Cowboys ongoing negotiations with their star quarterback.

Have the Cowboys gotten to this point with a franchise-tagged player before? Yes, but not a quarterback. They were able to sign Troy Aikman and Tony Romo to long-term deals before either could have come close to testing the market. In the years between Aikman and Romo, they did not have a quarterback they wanted to keep long term.

In 2015, the Cowboys put the tag on receiver Dez Bryant. He spent only a handful of days around the team in the offseason because he did not sign the tender. Eventually, the Cowboys and Bryant agreed to a five-year, $70 million deal, but it nearly did not happen.

After the sides agreed, the Cowboys needed Bryant to sign the contract before sending it to the league office. It wasn’t until about 10 minutes before the deadline that Bryant made it to Valley Ranch to put pen to paper.

Ezekiel Elliott is famous for his “Feed Me” celebration on the football field, but after his recent collaboration with a clothing brand, he was able to help feed 400,000 North Texas families in need. In April, Zeke announced he was teaming up with CentreTX to release exclusive merchandise and donate 100% of proceeds of sales from his merchandise line to the North Texas Food Bank.

He announced this week the total donation totaled up to $85,000. This donation is part of efforts to provide relief to the North Texas community during the COVID-19. Zeke, who has recovered from his June COVID-19 diagnosis, made an effort to personally deliver the check to the North Texas Food Bank.

Five Dallas Cowboys who could have a comeback year in 2020 – Matt Aaron, FanSided’s The Landry Hat

Which Cowboy will have the biggest bounce back in 2020?

In what now seems a prior life, Smith put together one of the greatest two-years of production in NFL history, making 33.5 sacks over 2011-12, his first two years in the league. That second year, the pass rusher took down the quarterback 19.5 times! That’s inhuman! Sadly, that’s when trouble hit. An apparent victim of his own success, Smith experienced substance abuse and a variety of other personal problems for years. He was out of the league entirely by 2015.

Recently reinstated by the NFL, Smith appears sober and rock solid. Apparently, the man has spent some time in the weight room, going from 260 to 287 pounds with hardly an ounce of body fat, according to Jay Glazer via SI.com.

“[Aldon Smith] is just freaking monstrous … We had him on these resistance cords connected to the wall on a machine called the Raptor. I’ve had a ton of guys on it — big huge guys, monsters. Smith ripped it off the wall … No one has ever done that. He is an absolute freak of nature. I don’t know who to compare him to because he’s 287 with a V. It’s ridiculous.”

There are a lot of things going on around the NFL. Listen in as we break it all down for you.