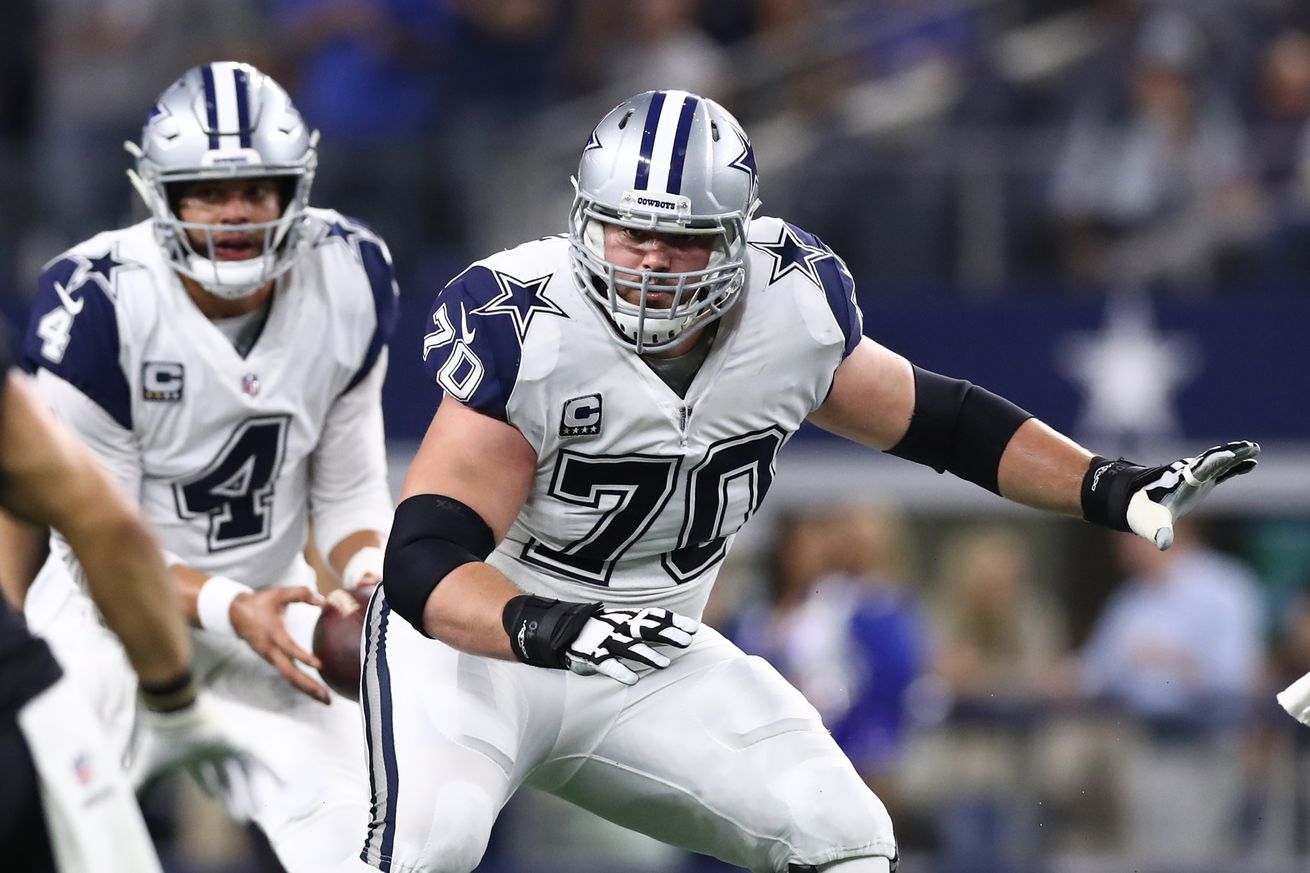 The Cowboys have one of the best offensive lineman in the game.

Can you believe that Dak Prescott was less than a 100 yards away from being a 5,000 yard passer last season? The Dallas Cowboys’ ability to attack through the air helped them lead the NFL in total yards. It was amazing what the team’s young quarterback could do when he was kept upright. After being sacked 56 times in 2018 (second most in the league), the offensive line return to form helping Prescott sack totals to drop all the way down to 23 last season (second fewest in the league).

One of the reasons the Cowboys protection was considerably better was due to the improved health along the interior offensive line. In 2018, the Cowboys two starting guards and center combined to miss a total of 24 games, which included Travis Frederick for the entire year. It also was the first time in his career that Zack Martin missed a start as he was out of action for two games due to an MCL sprain.

But last year, Zack was back, and he made sure his presence was felt. Over a full 16 games, Martin was involved in 630 pass blocking snaps. And do you know how many sacks Martin allowed in those snaps? Zero. Zilch. Nada.

In fact, you have to go all the way back to when Martin was ailing with his knee injury the previous season to find the last time he gave up a sack. Some would say that’s pretty good.

Per PFF, the last time Zack Martin allowed a sack was Week 14 in 2018 – a game where he was hobbled due to a knee injury.

I’m obviously very biased, but I honestly don’t think there’s a better offensive lineman than Zack Martin in all of football. #Cowboys pic.twitter.com/xgLJDI7RWJ

Martin has turned out to be a remarkable player for the Cowboys. He’s earned All-Pro honors in every one of his six seasons in the league. Not only is he not responsible for his quarterback hitting the turf, but there aren’t many times where the stud lineman even allows him to be pressured. Check out this amazing stat courtesy of Pro Football Focus:

Zack Martin has allowed 0 pressures in 38 out of his 94 career regular-season games #Cowboys pic.twitter.com/GaLgVLByEG

Martin is 29 years old and is under contract for the next five seasons. Having missed just two games throughout his career, he’s proven to be a valuable commodity for the offense. His yearly cap hit is roughly $15 million, and as it currently stands – he’s the fourth-highest paid guard in the league. He trails Brandon Scherff (Redskins), Joe Thuney (Patriots), and Brandon Brooks (Eagles).

And while these other guys are good players, it’s Martin that shows year in and year out that he’s an immovable force within the trenches, providing outstanding protection for his quarterback. That’s a valuable asset to have considering the Cowboys are close to making the largest financial investment in team history when Dak Prescott finally receives his new long-term deal.

The Cowboys offensive line continues to be a steady piece to the offense with the help of several key contributors, but the performance of Martin is the glue that holds it all together. His stats speak for themselves as he keeps doing what’s he’s been doing since entering the league in 2014 – dominating his opponent.