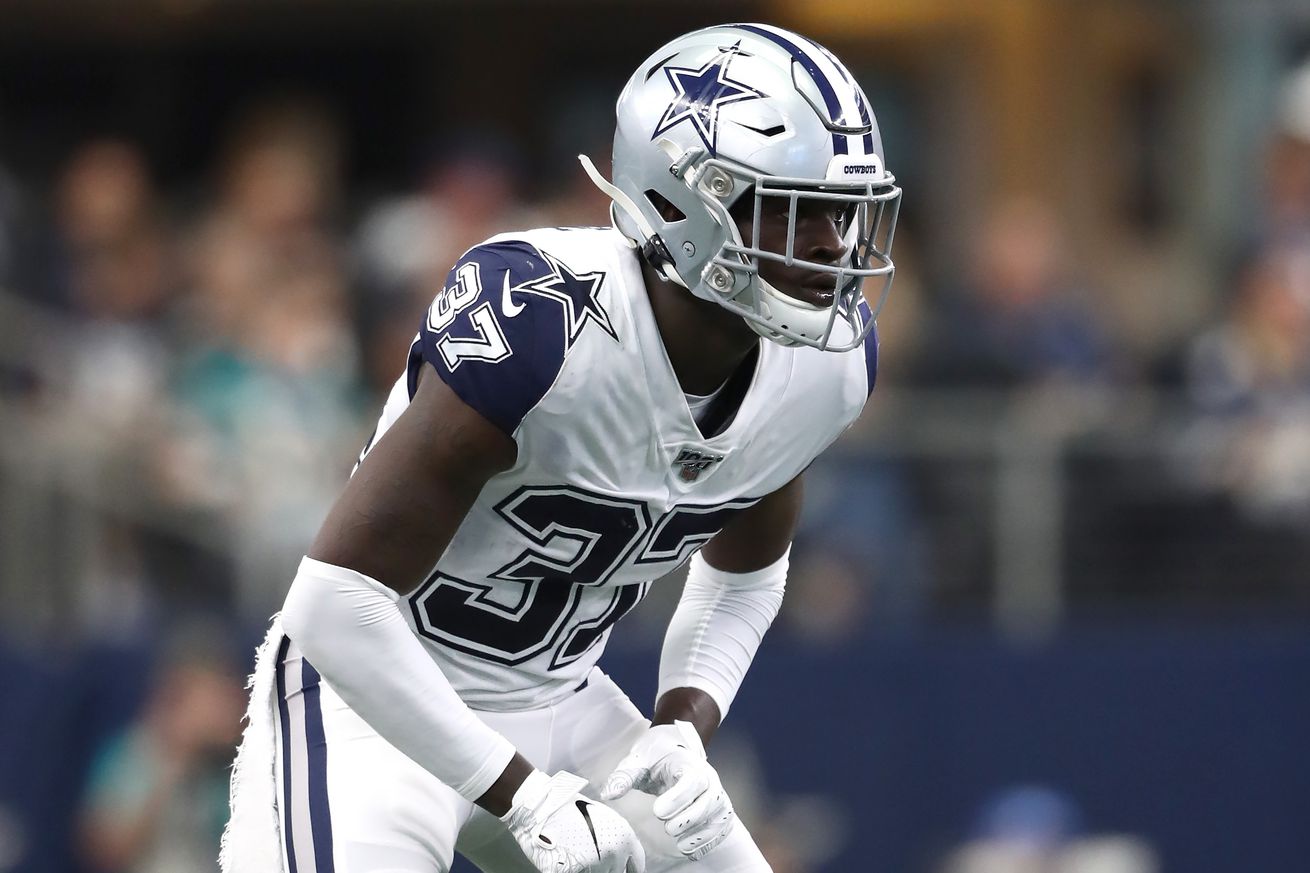 The latest Cowboys news and notes

Who jumps to your mind regarding the Cowboys when you hear “underrated”? This safety makes Bleacher Report’s list.

The Dallas Cowboys could end up trading for superstar safety Jamal Adams, but that hasn’t happened yet. Veteran Jeff Heath is also gone, and the only three experienced safeties on the roster—Xavier Woods, Ha Ha Clinton-Dix and Darian Thompson—are all better suited as free safeties.

Those dynamics could end up paving the way for intriguing but overlooked 2019 sixth-round pick Donovan Wilson, who is physical and versatile enough to make a tremendous impact if the stars align for him inside the box.

The Texas A&M product intercepted three passes last preseason before an ankle injury killed that momentum. But he’s healthy now and should have an opportunity to flash that presence again. And it also helps that he has lots of history playing nickel cornerback, because Dallas could opt to try Jourdan Lewis outside in the wake of Byron Jones’ departure.

Wednesday is coming quickly for Dak Prescott and the Cowboys.

There is a short time remaining for long-term contracts.

The deadline for franchise-tagged players to work out long-term deals is now less than a week away as Wednesday at 4 p.m. ET draws near. That is the deadline for any club that designed a franchise player to sign said player to a multi-year contract. Following Wednesday, a tagged player cannot sign an extension until after the final game of the upcoming regular season.

The most high-profile are Dallas’ QB1 – Dak Prescott – and Tennessee’s freight train in the backfield – Derrick Henry.

As of a week prior to the deadline, nothing had changed for Prescott, who was looking for less years than Dallas was offering.

The Cowboys are not nearly in the bad position that the Falcons or the Eagles are in. They have more than $20M in space for 2021 as it currently stands, which is below average but still tenable; in both 2022 and 2023, they drop to bottom-five in the league. But unlike both Philadelphia and Atlanta, the Cowboys don’t have something that’s critical to the calculation: a big-money QB contract.

As the Cowboys have failed to extend Dak Prescott over the past offseason, they have tethered him to the franchise tag, which under the current CBA, locks him into a certain value for a 2021 tag, even in the event of a flat or depreciated cap in 2021. If Prescott signs his franchise tag in 2020, he’ll be paid at least $31.4M this season—and to get tagged in consecutive seasons, the second-year tag must be 120% of the first-year tag. In Prescott’s case, that’s $37.7M.

So the Cowboys have three options: extend Prescott long-term, let Prescott walk, or tag Prescott. Two of those are expensive, and one of those costs the Cowboys a tremendous young quarterback. Extending Prescott can be cheap in 2021, to keep things under the dropped 2021 cap ceiling—but remember, the Cowboys are already in a tricky spot for 2022 and 2023. That’s without Prescott signed, but also without either of their current starting corners or starting safeties signed beyond 2020, and Connor Williams and Michael Gallup free agents after 2021.

Things look survivable now, but the lack of a Prescott contract is lying about the long-term security of the Cowboys cap, unless he decides to take an extremely team-friendly deal—which is tough to imagine giving the contract fallout to this point. Unless a collectively-bargained agreement helps the Cowboys out with a lower second tag or another way of stringing out Prescott’s extension, they’re going to have to lose free agents to keep enough space to retain their franchise quarterback.

Zack Martin is elite, there is no question about that. But, where do NFL personnel have him ranked among interior lineman?

Martin is still the gold standard for some despite the emergence of Nelson. He’s durable, stout against the run and pass and does all the little things coaches love.

Nelson and Martin split the first-place voting until Nelson separated, with a general manager and others helping break the tie.

“More of a technician than Nelson, so that’s probably where he gets his edge,” an NFL offensive coach said.

When coaches say about a player — man, imagine what he would do behind Dallas’ offensive line — they are thinking about Martin as the anchor inside.

Training camp appears to be coming soon, so what are some of the top roster battles to keep an eye on?

With Byron Jones leaving in free agency, the Dallas Cowboys are left with a massive hole at CB1. There’s now no proven player on the roster capable of consistently locking down a WR1 or WR2 in single coverage, meaning the entire secondary is going to have to adapt in 2020.

To make matters worse, Dallas’ CB2 from last year may be transitioning to safety this season. While Chido is better suited to play in the box and inside, he leaves a frightening void at CB2. While I think Chido will ultimately stay at outside CB, the Dallas Cowboys have indicated otherwise (see related story below) and are clearly looking to find answers at both boundary CB spots in 2020.

How will the ongoing pandemic potentially impact top draft prospects?

It’s time to consider more, as in which players will stick around to see what happens.

That’s becoming a question on all levels of football as COVID-19 cases spike through numerous states, including college football hubs Florida, Texas and California. The Big Ten and Pac-12 announced moves to conference-only schedules after the Ivy League pushed all fall sports, including football, to the spring semester.

Based on social media reactions, such news surprised those hoping for, if not counting on, the return of college football. The players, particularly some projected top 2021 draft prospects, have begun considering such a dark timeline over recent weeks.

Clarity is coming soon about whether NFL players will report to training camp and salvage a season.

Sources said the NFL and NFLPA management councils are expected to meet Monday in hopes of agreeing to terms on a return to work.

A source told ESPN that players and the league were close to agreeing to working conditions and that momentum for having at least some preseason action exists, with a one-game format also being discussed. The source added that players would likely get concessions as a result of preseason play.

But all that has not been finalized, and there are other issues to hash out.

Acclimation period: Players want a slow ramp-up, from working out to taking the practice field, to avoid injuries and to get comfortable in the new working environment.

Opt-out clauses for players: What happens to a player’s contract if he decides to sit due to COVID-19 concerns, and does he get an accrued season?

Whether trimming the 90-man training camp rosters to avoid unnecessary contact is the right thing.

Equipment modifications: Players are lukewarm about wearing masks over their helmet bars, while the NFL has been working with Oakley on a yet-to-be-revealed design.

Economics: How to share lost revenue, with players knowing they have to take a loss somewhere to offset the lack of fans in the stands, but with the league’s offer to place 35% of salaries in escrow considered a non-starter.