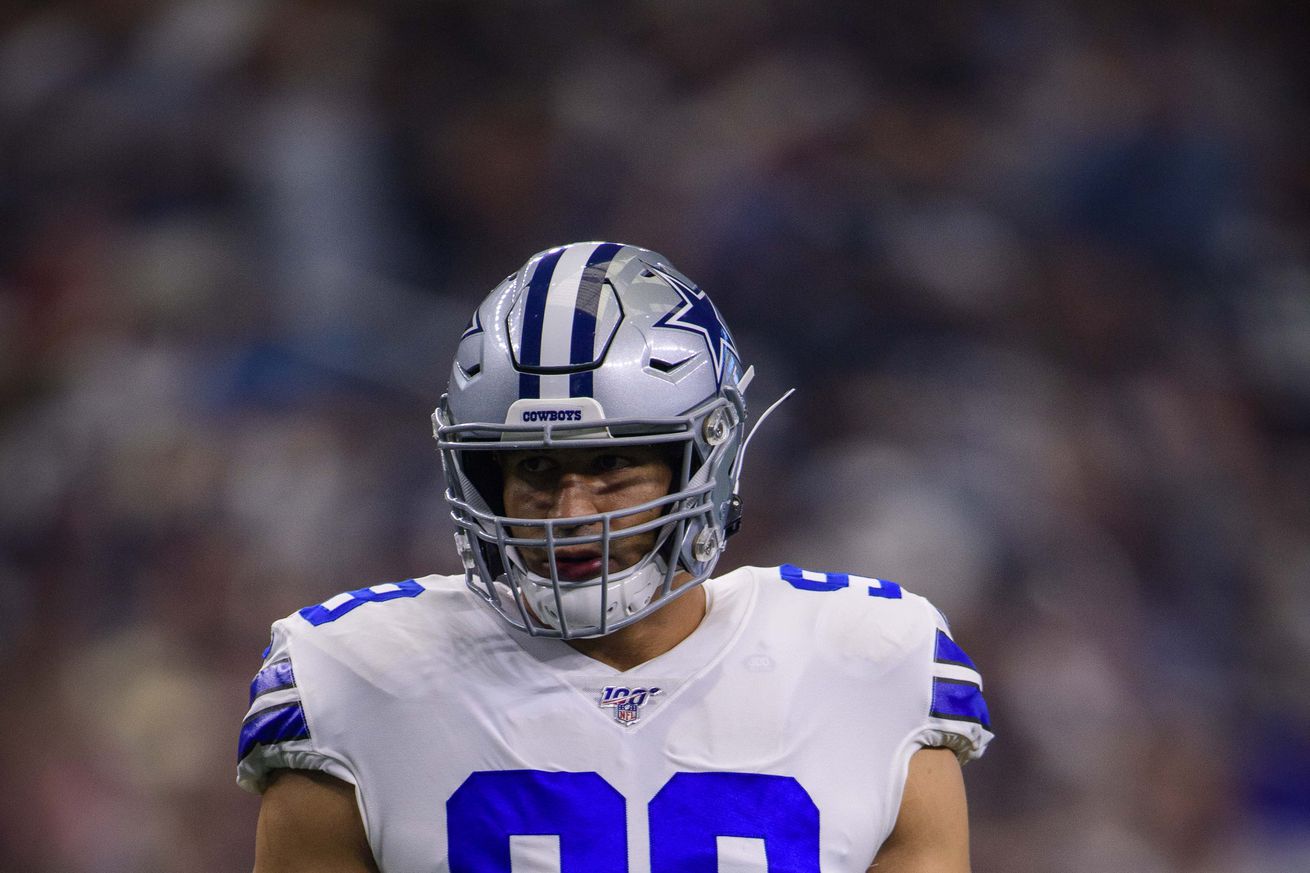 The Cowboys news, delivered your way,

Don’t write off Tyrone Crawford. This year he may be more important than ever for the new defense.

This is why, in looking at Crawford’s $9.1 million cap hit to come, the Cowboys are uber-comfortable, especially considering it involves no signing bonus hit for the first time in his career. The former third-round pick provides much-needed assurance at the right defensive end position and although he’ll be tasked much less with doing so, also gives them an ability to flex inside to rush from 3-tech. Considering Nolan will run a 4-3 hybrid base — i.e., it will shift to 3-4 on the fly and back to 4-3 time and again — there’s going to inherently be fewer 3-tech snaps for Crawford to take on anyway.

Why? Well, here are some cliff notes for you.

In a 3-4 setup, there is typically no 3-tech assignment, but instead a 0-tech (directly over center, nose tackle) and two 5-techs (defensive ends). In what’s called an “Okie” front, the 3-4 assigns each of the three defensive linemen to attack one of two assigned gaps, and Crawford’s ability to also rush from the interior makes him a great candidate to attack an offensive tackle from either shoulder. But whether it’s an Okie, and Eagle front or an Under — the latter “squeezing” the right defensive end (weakside) more inside with two-gap responsibilities that blend with the traditional placement of a 4-3 interior lineman who’s just right of center (3-tech) — Crawford’s talent, abilities and expertise aren’t easy to come by.

And now, he’s healthy again, and hungrier than he’s seemingly ever been.

It’s also key to note Crawford is no stranger to the 3-4, having played in it as a rookie under Rob Ryan before the keys were tossed to Monte Kiffin to convert back to a 4-3 setup. This tidbit isn’t lost on McCarthy, Nolan and Tomsula, who are looking for the best players that can dominate regardless of system. Additionally, Crawford can also rush the passer off of the strongside, allowing him to spell Lawrence as needed and allows even more flexibility on the edges for the Cowboys.

After Blake Jarwin, there is room for someone to make a name for themselves at the tight end position. Could UDFA Sean McKeon be the guy?

How Does He Make It: With the exception of Blake Jarwin, there aren’t many guarantees with this tight end group.

Blake Bell seems likely to make the team, but he’s also only under contract for one year. Dalton Schultz is halfway through his rookie contract and has 13 career catches – including just one last year.

It’s possible that a rookie could crack a three-man depth chart. And if the Cowboys decide to keep four tight ends during Mike McCarthy’s first year as head coach, it’s downright easy to imagine McKeon earning a roster spot.

How He Can Help: It will be interesting to see how McCarthy handles this position.

Losing Witten removes any sense of certainty, given that he was a virtual certainty to play the majority of the snaps. Without that constant, we could see as many as three or four different tight ends playing a role.

Obviously, Jarwin figures to play the most snaps and see the most targets in the passing game. Bell is a savvy veteran who can help in multiple-tight end sets.

It’s unlikely that McKeon’s role would be huge in Year 1. But if he proves he’s worth a roster spot, he’d likely see spot duty with an eye on developing for the future. If that doesn’t work out, the practice squad is also a plausible destination.

A look at the testing the Cowboys players will have to go through, and how they’ll need to be very vigilant going forward.

The Cowboys’ rookies reported on Tuesday, all being tested for COVID-19 in a designated area by The Star loading dock. The rookies are required to test a second time today, July 24. Two negative tests will allow them to enter the facility once the results are confirmed.

The remainder of the players will report on Tuesday, July 28, for their initial nasal-swab testing. Same for them. Must test again 72 hours later. Only two negative tests will allow them into The Star.

Again, who knows what those test results will be for what is now a 90-man roster, with looks like a possibility of shrinking to 80. Who knows how many of these players have maintained a self-induced bubble during this raging coronavirus pandemic.

Positive tests will create complicated isolation from the facility, just as we’ve seen in the NBA with players testing positive before being allowed into the Disney bubble.

Prior to B.C., Before Corona, teams would hold their breath during that period stretching nearly six weeks from the end of the offseason workouts to the start of training camps with players enjoying unstructured time. But now, that breath-holding is for an entirely different reason.

And remember, even if players test negative during this initial phase of testing, that only allows them into the facility. After that, at the behest of the NFLPA, players will continue being tested every day for the next two weeks. And only if enough players pass with flying colors, considered less than 5 percent positivity, then testing will be conducted once every two days.

The Cowboys have some uncertainty along the interior offensive line, so Connor McGovern has a shot to play his way into a role.

There’s not a player on the roster who has more opportunity to climb the depth chart than Connor McGovern. Thanks to his position flexibility along the interior offensive line, McGovern could vie for one of two different starting jobs: center and left guard.

At left guard, McGovern would compete against the incumbent starter Connor Williams, who has shown a steady improvement since entering the NFL but has yet to play to a level where competition for his job isn’t warranted. McGovern has veteran Joe Looney and rookie Tyler Biadasz standing in his way at center. Looney has the most experience of the bunch and provides a nice floor for the Cowboys, but he can be improved on. Biadasz is an intriguing talent, but the unusual offseason makes it extremely hard for a rookie to step in and contribute right away, especially at a position like center.

McGovern spent meaningful time playing center in college, starting 13 games at Penn State as a sophomore (allowing 15 total pressures) and one as a junior. While the rest of his college career was spent at guard, he didn’t see any time at left guard, which is important given how ingrained the intricate movement patterns are along the offensive line. That said, the duality of the center position should make the transition easier than if he were making a switch purely from the right side to the left.

As things currently stand, McGovern probably isn’t the favorite to win either gig, but you can bet he’ll get ample opportunities to win at least one of them. There’s reason to believe McGovern can unseat one of the favorites at either position.

A quick highlight of the deal struck yesterday.

Players who decide they want to opt out have until Aug. 3 to do so, and they will receive a stipend from the owners, the people said on condition of anonymity because the offer has not been made public. The amount of the stipend will be $350,000 for medical opt outs and $150,000 for voluntary opt outs.

That agreement eliminated one major obstacle to a full opening of training camps next week. Already, the sides had agreed to cancel all preseason games, as well as to a reduction in the number of roster spots in training camp from 90 to 80 — though teams will have until Aug. 16 to get down to 80.

The league also offered an extended acclimation period of 18 days for players, given that the coronavirus caused the cancellation of all offseason on-field activities at team facilities. Training camps are to open Tuesday, though the Texans and Chiefs, who meet in the season opener Sept. 10, have veterans scheduled to arrive this weekend for COVID-19 testing.

Many economic issues were settled, including how to handle revenue losses that would result from games played without fans or even canceled games because of COVID-19. The league has proposed a minimum salary cap of $175 million for 2021; this season’s cap is $198.2 million.

Should the 2021 salary cap decrease — a very likely outcome — caps through 2024 would be adjusted to cover some of that drop-off. That way, the cap wouldn’t plummet too far.

The Cowboys first opponent is the Rams. Our sister blog for the Rams, Turf Show Times, recounts the beating the ‘Boys put on them last year, then zeroes in on Dak Prescott.

Prescott finished 15-of-23 for 212 yards and two touchdowns. He led Dallas to touchdowns on four of their five first half drives and eight of nine drives ended in a score for the Cowboys. Prescott has been a consistent quarterback throughout his first four seasons but 2019 was the pinnacle in many respects as he maintained a passer rating of nearly 100 even though he threw 596 attempts — 70 more than any of his previous seasons and almost 140 more than his rookie campaign — as well as a career-high 8.2 yards per attempt and while only taking 23 sacks.

In most respects, Prescott’s first four seasons are as good or better than Tony Romo’s first four seasons, and Romo started three years later in age. It was an obvious choice for the Cowboys to give Prescott the franchise tag this offseason once they realized they couldn’t come to a long-term agreement before he’d become a free agent, however the extra negotiation time didn’t help.

Prescott signed his franchise tag and he’ll play this season for $31.4 million. It is a lot of money, multitudes more than the total sum Prescott has been paid for four years on the rookie deal of a fourth round pick, but still a lot less than the $100 million or so guaranteed that he’d likely get on an extension.

Prescott, who finished first last season in DYAR, isn’t holding out or demanding a trade though. He’s ready for training camp, whenever that will start, and presumably ready to go on the road in Week 1 and face the LA Rams in their SoFi Stadium debut on September 13th for Sunday Night Football.

Sports are back, but what is life inside of a bubble like? We find out on the latest episode of Girls Talkin ‘Boys.