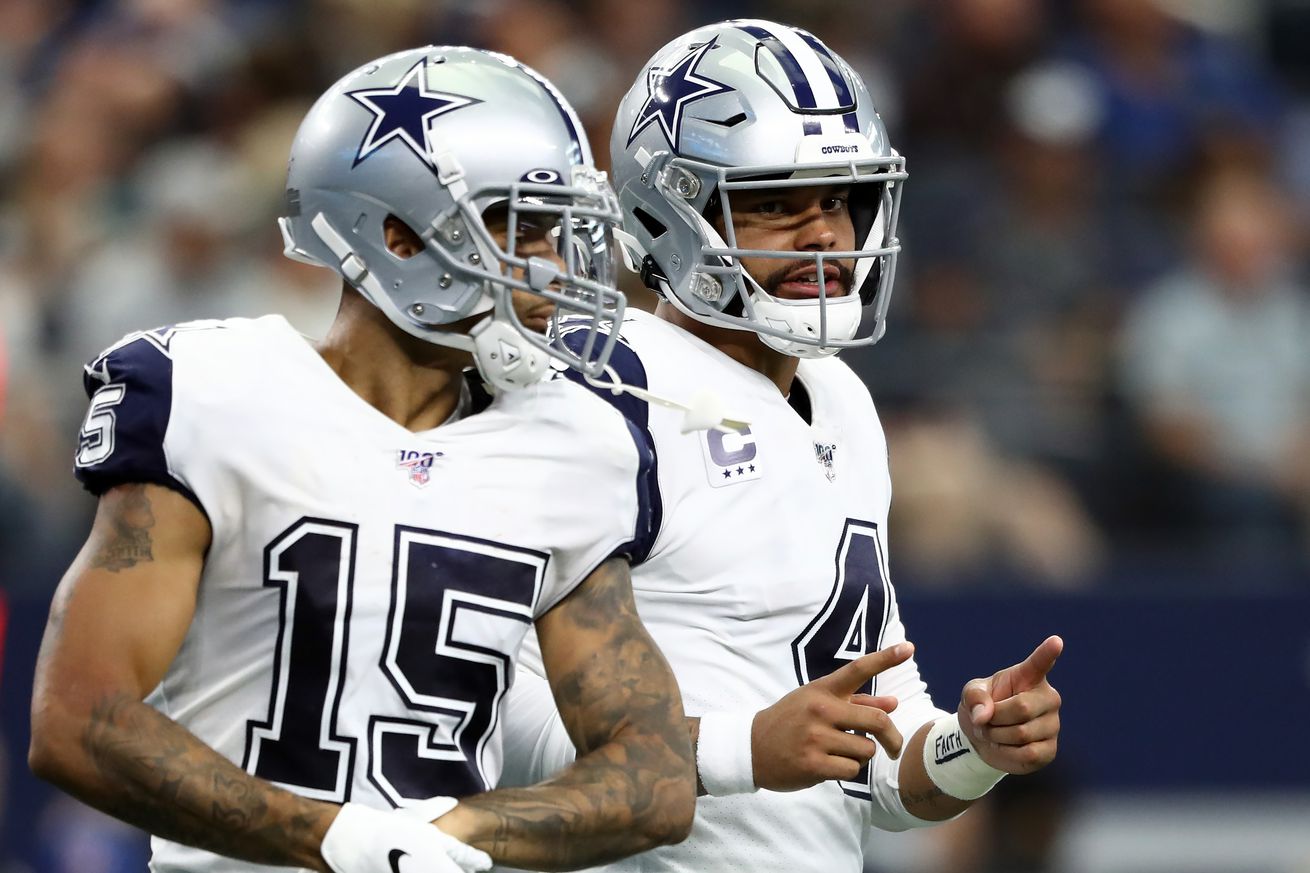 Some bubble players that may not make the cut without the chance playing in preseason games.

3. WR Devin Smith could be cut by the Dallas Cowboys

Unless you’ve had your ears and eyes covered since the 2020 NFL Draft, you know that the Dallas Cowboys could have one of the most dangerous wide receiver groups in the NFL this season. The first-round selection of CeeDee Lamb out of Oklahoma puts a dynamic young playmaker in the mix with Amari Cooper and Michael Gallup, two players who are coming off of 1,000-yard seasons.

Outside of that potentially elite trio, though, how the depth chart shakes out at the position will be something to keep an eye on throughout training camp. From Jon’Vea Johnson to Cedrick Wilson to Noah Brown to Devin Smith, among others, there is a long list of players who will be vying for depth spots in the Cowboys passing attack this season.

Many people likely recall Smith’s contributions in 2019, his first year in Dallas, as he filled in beautifully. In Weeks 2 and 3 amidst injuries, Smith stepped up with five catches on eight targets for 113 yards and a touchdown, including a 3-74-1 line in a win over the Washington Football Team. The issues is that is the entirety of his production from last season.

Though Smith is a former second-round pick who clearly has talent, the Cowboys have a litany of younger options on the roster who have garnered positive reviews as it pertains to their potential. With the top of the depth chart so secure, it wouldn’t be a surprise to see Dallas look at players like Johnson, Wilson and Brown over Smith when roster cuts transpire given that they offer more upside and versatility in some cases.

On the topic of roster moves, the NFL world saw Jamal Adams move to Seattle. A report suggested that the Cowboys were one of two teams that actually reached out to inquire about the All-Pro defensive back.

Fowler tweeted a number of takeaways from the trade that he reported from sources, first of which was that the San Francisco 49ers and Dallas Cowboys were among the Adams suitors. But with the price tag involved — the Seahawks received Adams and a fourth-round pick, the Jets landed two first-round picks, one in 2021 and one in 2022, along with a 2021 third-rounder, and safety Bradley McDougald — makes it seem unlikely that another team would have been able to come out on top.

Fowler tweeted that the “draft uncertainty [was] a factor,” in the trade, and pointed out that a long-term deal wasn’t a stipulation for the trade. Seattle can extend Adams, on the fourth-year of his rookie contract, either this year or next year, per Fowler. This past spring, the Jets picked up the fifth year of Adams’ contract, though Adams has desired a long-term contract for a considerable length of time.

The Dallas Cowboys had long been considered a potential landing spot for Adams, who played his high school ball about a half hour from AT&T Stadium at Lewisville (Texas) Hebron, and even played on the Cowboys’ field at times. But the San Francisco 49ers come as a bit more of a surprise suitor. At the same time, San Francisco wasn’t far away from winning it all a year ago, and Adams could have potentially tipped the scales in San Francisco’s favor.

So now that Adams is officially off the table, who can the Cowboys target to bolster its roster?

Harris was franchise tagged by the Vikings, and now without a multi-year deal he’ll play the 2020 season for $11.44 million. Minnesota now has a lot of cap money tied up in safeties Harris and Harrison Smith, and the outlook for giving Harris a deal to his liking next March isn’t good even without the prospect of a lower salary cap for 2021.

Harris had breakout season in 2019, with six interceptions, 11 pass breakups and 60 total tackles. Pro Football Focus graded him out as the second-best safety in the league.

Harris was an easier trade target earlier in the offseason, with the New York Giants, Cleveland Browns and Tampa Bay Buccaneers as possible suitors. The Cowboy would have to send a player/salary back to the Vikings in a trade (Michael Gallup? Anthony Brown? Jourdan Lewis?), or extend Harris right away to reduce his cap number for this year. But it can be done, and perhaps the Vikings would entertain the idea of trading Harris if the right offer came along.

Why the Cowboys missing out on Jamal Adams is both good news & bad news – DannyPhantom, BTB

Danny wrote a great piece explaining both the good and the bad about Jamal Adams not landing in the DFW.

Looking closely as this deal, it seems like a steep price. While it would’ve been nice to get a player like Adams on the Cowboys roster, it’s a little bit of a relief that the Cowboys didn’t fork up this much draft capital. Two first-rounders? Ouch. That’s expensive, especially for a team that has a history of putting those first-round draft picks to good use.

The thought of giving up two Day 1 picks seems ludicrous, and we may feel compelled to point our fingers and snicker at the Seahawks for giving up that much. However, Seattle is taking a calculated risk, and there is one thing they have going for them that makes the deal more satisfying – they have been terrible at drafting players early in the draft in recent years.

In April, the Seahawks shocked people by selecting Texas Tech linebacker Jordyn Brooks with their first-round pick, in what many believed was a huge reach. In fact, the Cowboys had five players (CeeDee Lamb, Trevon Diggs, Neville Gallimore, Tyler Biadasz, and Bradlee Anae) who were all ranked higher than Brooks in ESPN’s 2020 draft rankings.

Could Keeping Dak Prescott Force Cowboys to Lose Tyron Smith in 2021? – Jess Haynie, Inside The Star

The failure to extend Dak Prescott long-term could make some difficult decision on the roster next year. Could keeping the QB actually cause the team to lose its left tackle?

If the worse-case scenario happens then Cowboys are projected to only have about $33 million in cap space in 2021. And that’s before they’ve signed any of next year’s rookies or, more importantly, re-signed QB Dak Prescott.

Paying Dak on the franchise tag in 2020 is going to cost Dallas around $31 million. If they tag him again next year, that number jumps up to over $37 million.

Remember, that $33 million in projected space is already accounting for expiring contracts such as Tyrone Crawford’s, Sean Lee’s, and others. So if the Cowboys need more space in 2021 it’ll have to come from releasing or restructuring players who are under contract beyond this season.

Tyron Smith’s contract would offer $10.5 million cap relief in 2021 if he’s released, generating just $1.745 million in dead money. The only other contract which offers anything close to that is Zack Martin‘s; $7 million in cap space if released. But Dallas isn’t going to part ways with arguably the best guard in football.

That said, what are the three best contracts on the team right now?

La’el Collins was arguably Dallas’ best offensive linemen last year. With Zack Martin and Tyron Smith playing hurt most of the year, and Travis Frederick struggling to regain form, Collins was the strength of the line.

Snubbed by Pro Bowl voters, Collins ranked as Pro Football Focus’ 5th overall offensive tackle last season (left tackles and right tackles). The blue-chip prospect out of LSU signed a below-market deal last summer to stay with the only pro team he’s ever known. La’el Collins has chosen to be with the Dallas Cowboys twice in his short career. Once as an undrafted free agent and again last summer (earning loyalty points in Cowboys Nation). His $10 million per year salary ranks just 20th in the NFL making Dallas’ offensive tackle situation the absolute best in the NFL.

Despite completely dropping the ball with the Dak Prescott negotiations, the Dallas Cowboys have a few of the very best contracts in the NFL. Even the highly paid Amari Cooper contract is savvy because it offers a free “out” after two seasons.

It’s training camp time, but the NBA returns this week as well. We got the 101 on the Dallas Mavericks on the latest episode of The Ocho.