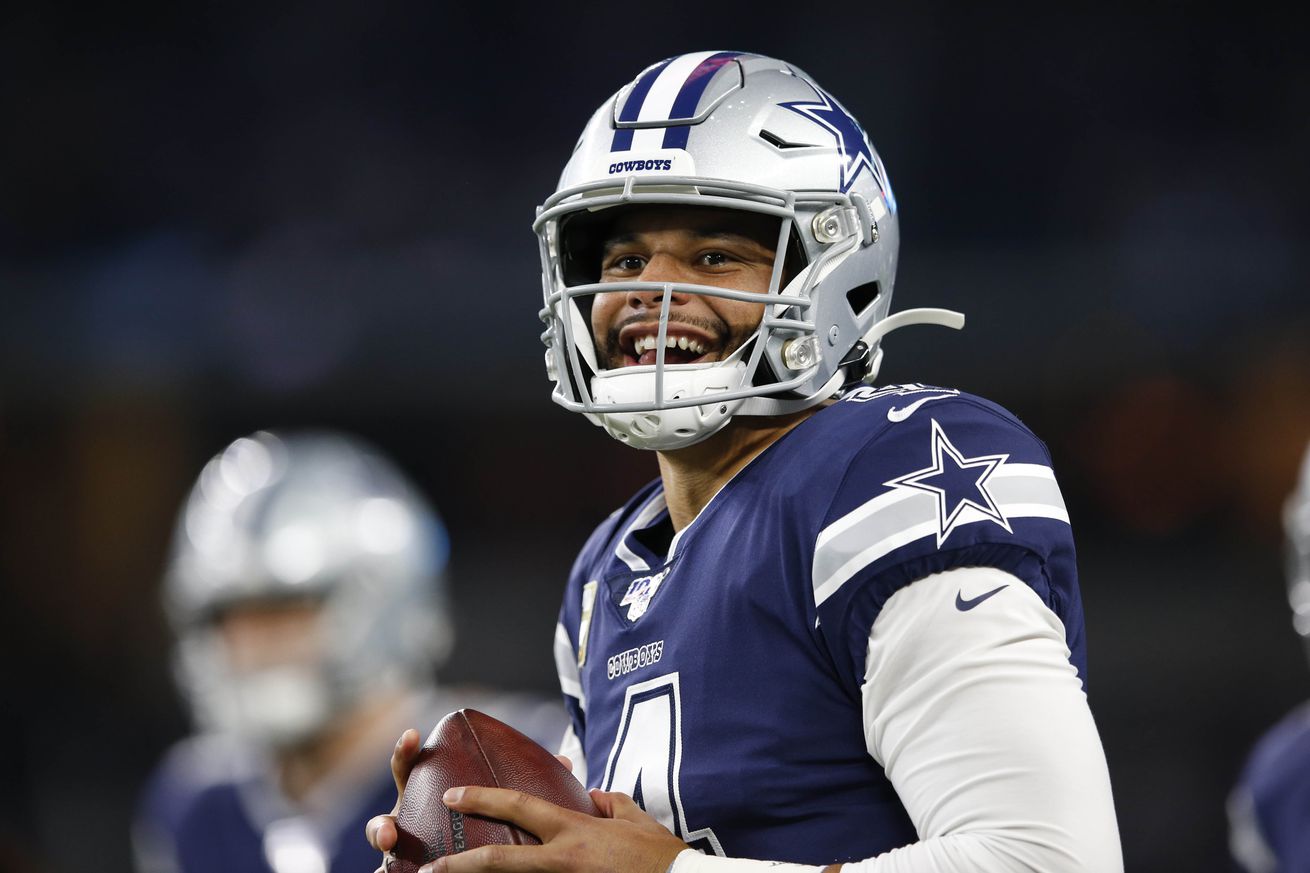 Some interesting information on how the league views the Dallas QB.

The offseason is almost like a never-ending cycle of top-10 lists. We have seen ESPN release position rankings with input from NFL personnel and the NFL Network is currently airing the always controversial NFL Top 100 rankings.

On Monday, another intriguing list of rankings was released. Mike Sando, of The Athletic, publishes an annual quarterback tiers piece that includes opinions from league executives and coaches. Quarterbacks are separated into tiers one through five, with one being elite and five being the worst tier.

These rankings always bring up spirited debate. How many tier-one quarterbacks truly are there? Which quarterbacks are just on the outside looking in and could make that jump after an impressive season? And of course, the bottom of tier-two and top of tier-three are always scrutinized, it seems.

Without further ado, we will look at where Cowboys quarterback Dak Prescott landed in this piece. While Prescott has been included in many top-10 quarterback rankings already this offseason, it is fascinating to see what Sando’s contacts think about number four.

Dak Prescott is a tier-2 QB in The Athletic’s QB Tier Rankings.

The Cowboys quarterback was one of eight to find himself in the second tier, according to The Athletic. The second tier is described as someone that “can carry his team sometimes but not as consistently. He can handle pure passing situations in doses and/or possesses other dimensions that are special enough to elevate him above Tier 3. He has a hole or two in his game.” Tom Brady was at the top of tier-two, while Phillip Rivers rounded out the tier.

Prescott ranked 12th overall, receiving three tier-one votes, 33 tier-two votes, and 13 tier-3 votes from the people around the league that were polled. The rising fifth-year QB landed in the third tier ahead of last season, so his 4,904-yard, 30-touchdown campaign pushed up a category.

One defensive coach posed an interesting question: where is the hole in Prescott’s game? The coach, who is high enough on Dak to rank him among the elite in the league, believes that the Cowboys’ quarterback “can make every throw”.

“He can make every throw, he is athletic, he has command, he’s tough —where is the hole in his game?” a defensive coach who placed Prescott in the top tier said. “He hits deep balls, he has touch. He had somewhat of a rough game against Philly late in the season. I think he’s a complete guy. People say he needs the run game, but they ran it too much in the playoffs.”

“He really impressed me just with his, he has a little ‘it’ to him,” a GM said. “When you watch him live, he doesn’t get fazed. He has better arm talent than you thought. He’s big, he stands strong in the pocket, more accurate than I thought, he can escape, he can buy time, he can create. He is also one of those guys that needs players around him. When the left tackle went down, he was not as good. He is not in the top-five that can carry it, but he is a strong two.”

Sando notes that this is the first time in the last three pieces in which Prescott received top-tier votes. Last season was undoubtedly Prescott’s finest throwing the football and it appears that he is only getting better, a big reason why some had him in that elite tier.

An offensive coordinator that was polled said that Prescott is a “sure-fire two” with the potential to be a one. The coordinator continued to say that he thinks that “people are surprised at how good he is reading and processing and throwing the ball”.

“Dak is a sure-fire two and potentially could be a one,” an offensive coordinator said. “He needs a run in the playoffs, maybe a Super Bowl. I’ve watched a lot of his film. He does a nice job reading and I think he’s a great player. He was a fourth-round pick and thought of a little bit as a running quarterback in college. I think people are surprised at how good he is at reading and processing and throwing the ball where it needs to go and throwing it accurately. I have him as a high, high two, a top-seven quarterback in the league.”

In the article, these were the quarterbacks ranked six through 11 that ranked ahead of Prescott, but still landed in the same tier:

Meanwhile, Prescott did rank ahead of names such as:

All-in-all, it appears to be clear — with the information gathered from Jeremy Fowler’s ESPN article that ranked Prescott ranked 10th in the league while receiving votes in the top-5 and the comments in Sando’s piece — that the league views Prescott as a tier-two quarterback with the potential to break through into that upper echelon of quarterbacks. You can almost make an argument for any of those tier-two QBs to be ranked higher or lower than another.

Here’s hoping we have a football season this fall so we can see how much further Mike McCarthy can develop Prescott’s game while he throws to a plethora of weapons on offense.