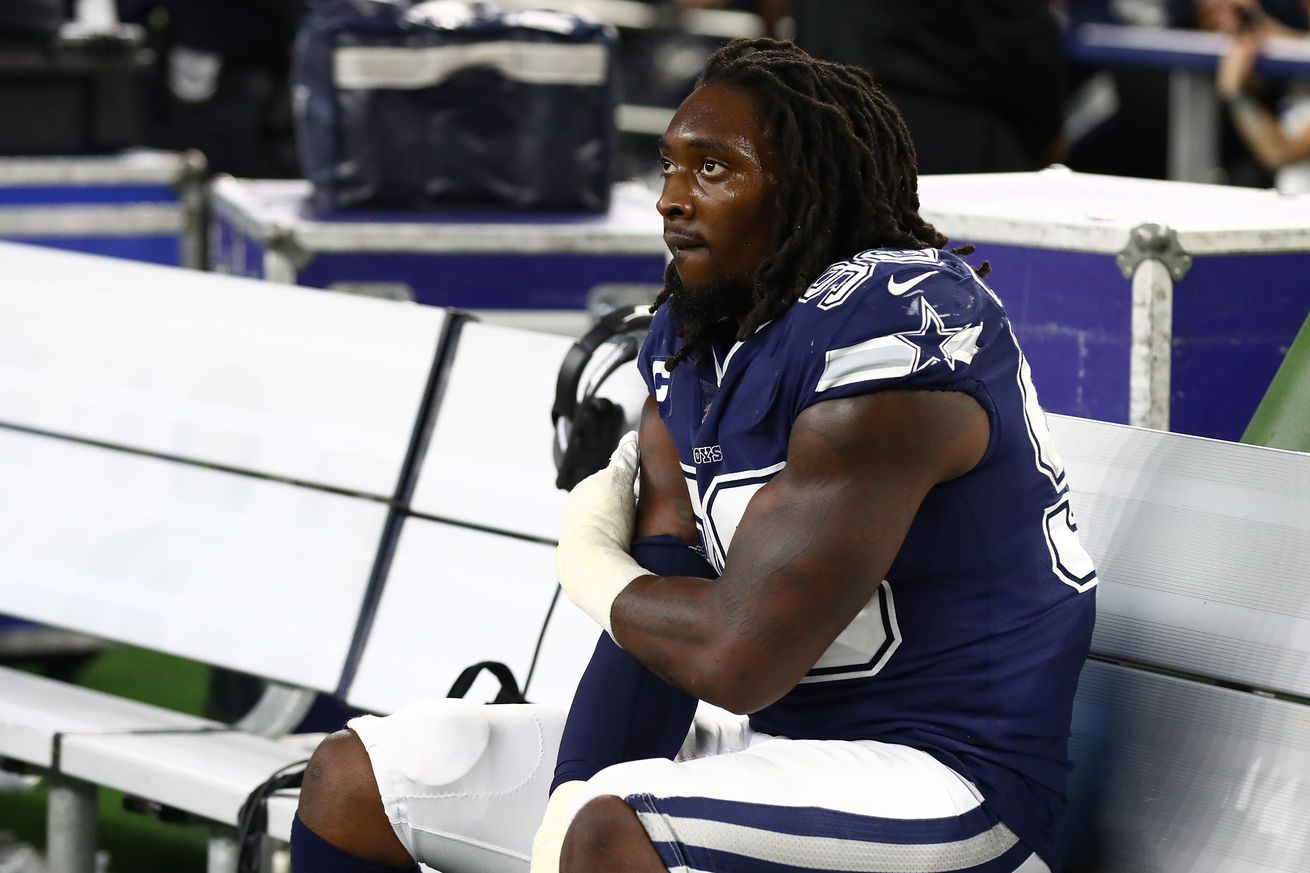 The Cowboys news is ready for consumption.

Would you even contemplate this trade?

Trading standout pass-rusher DeMarcus Lawrence is not the sort of win-now move that the Dallas Cowboys appear interested in making this year. However, if a team is willing to give up two first-round picks for a box safety, what sort of deal could the Cowboys get for Lawrence?

It’s worth finding out.

At 28 years old, Lawrence is in his playing prime. With 29.5 sacks over the past three seasons, he’s a producer. The Cowboys should see what they can get from a pass rush-needy team like the Cleveland Brown.

Why? For cap purposes. Dallas is in a tricky situation, as it will likely be negotiating with quarterback Dak Prescott again next offseason. Early extensions for Ezekiel Elliott and Amari Cooper have left the Cowboys with little cap space—currently just over $7 million—and 1,000-yard receiver Michael Gallup will be eligible for an extension next offseason.

Lawrence has a cap hit of roughly $22 million in each of the next two seasons. While he’s a Pro Bowl player when he’s at his best, that’s a lot of money for an 8-8 squad to be paying a second-tier edge-rusher.

The Mike McCarthy/Kellen Moore combo is predicted to be a potent force.

New Dallas head coach Mike McCarthy is stepping into a situation that was already pretty good overall, taking over a Cowboys team that ranked first in total yards per game (431) in 2019. However, one area where McCarthy’s influence and architecting forecasts to boost efficiency is in the red zone. The 2019 Cowboys were tied for the second-best third-down conversion rate (47.1), but when they came within 20 yards of an opponent’s end zone, their third-down efficiency decreased significantly (to 33.3 percent, tied for 21st). So despite ranking sixth in points per game (27.1), Dallas has room to improve in terms of scoring efficiency in the red area, with their 2019 red-zone touchdown rate sitting at 57.4 percent, 15th in the NFL.

Of all the teams with new coaches/play-callers, McCarthy’s Cowboys have the best odds in my model to make the postseason. Yes, holdover offensive coordinator Kellen Moore will continue to call plays. But the conservative and often predictable (as measured by defensive formations) nature of the Jason Garrett regime in Dallas forecasts to be replaced by a West Coast style that will make better use of a talented wide receiver corps (ranked second-best in the NFL by my model) under a coach who came to embrace analytics during his season away from the game. While the ex-Packer head man’s resume shows that he passed much more frequently in the red zone (on 59.7% of red-zone plays) than he ran the ball (40.3%) during his time leading Green Bay, and while he’s never deployed a running back with the type of effectiveness Dallas’ Ezekiel Elliott has displayed, McCarthy has logged many seasons with top-end O-lines. This leads me to increase my projection for Elliott’s results, especially given the space he’ll have to work with based on the spread alignment concepts. (Ahem — don’t under-value him in fantasy.)

The takeaway here? Expect creativity and effective West Coast principles. It would be hard for the offense to top the league in yards per game again, but the thing that really matters — win total — forecasts to increase. Which means franchise-tagged Pro Bowl quarterback Dak Prescott could make an even stronger case for a very lucrative long-term contract next offseason.

There is going to be competition at the place kicking position, so maybe the Cowboys should consider having one at the punter position.

I’m very surprised that we have not seen the Cowboys attempt to bring in any competition at punter. They made the move to bring in competition at kicker, so I’m puzzled why they wouldn’t do the same thing with punter. Chris Jones had a bad year last year, and his trajectory seems to be going down. Are there any decent UDFAs available that could at least create some competition?—DAN ZECHMAN / GARNER, NC

Jonny: When the dust settled on free agency, I think that was an interesting thing to notice. My only conclusion is that new special teams coordinator John Fassel is well-accomplished and well-respected in this league. So any decisions he signed off on likely have logic to them. An optimistic take on it would be that he trusts Jones, but also that he has a particularly good eye on the available punters who Dallas might be able to sign down the line without having to fill a roster spot before it’s proven necessary.

David: I think Jonny hit the nail on the head here. If the Cowboys didn’t bring in competition at punter, it’s probably because John Fassel thinks he can work with Chris Jones. And don’t get me wrong: the punting game has been lacking for a couple of years. Jones needs a rebound. But I trust Fassel’s track record, and I think he can help make that happen.

How rookie center Tyler Biadasz is dealing with the new reality of the NFL while competing for a starting job – Michael Gehlken, DMN

Rookie Tyler Biadasz gives an update on his injury situation, and is ready to go.

Biadasz is from Amherst, Wis. He spent the past few months training there while the NFL prohibited clubs from holding in-person activities. Biadasz said that he had no issue training or receiving physical therapy on his shoulder despite the pandemic. He underwent surgery for an AC joint repair prior to the Cowboys drafting him.

He characterized himself “good to go” with his shoulder strength at “100%.”

“We’re really getting after it in our meetings and everything,” Biadasz said. “We’re going through our workouts and our daily schedules. They are very concrete, what we are going to be for the next two and a half weeks here before we start football activities. I feel very, very well-protected with COVID-19.”

Just for reference, here is the training camp calendar.

July 28-31: The remaining veterans will undergo COVID-19 testing, two straight days on Tuesday and Wednesday, wait 24 hours and test again on Friday. Must test negative those three times to be allowed into The Star.

Aug. 1-2: Those veterans allowed into The Star will take their physicals and be fitted for equipment.

Aug. 12-13: Can begin practicing in helmets and shorts, so basically OTA-like on-field practices, with 90-minute limits that can increase another 15 minutes as the days go by, but not to exceed two hours.

Aug. 14 and 16: Can add shells to those helmet and shorts workouts, but no contact.

Aug. 15: Time for a day off after four months of days off – at least from being at The Star.

Aug. 16: Rosters must be reduced from the presumed 90 to no more than 80 players before the first padded practice.

We’ve been putting together a 53-man roster across the BTB podcast network all week. Broadcasting The ‘Boys is the latest group up and they took on the linebackers and secondary.