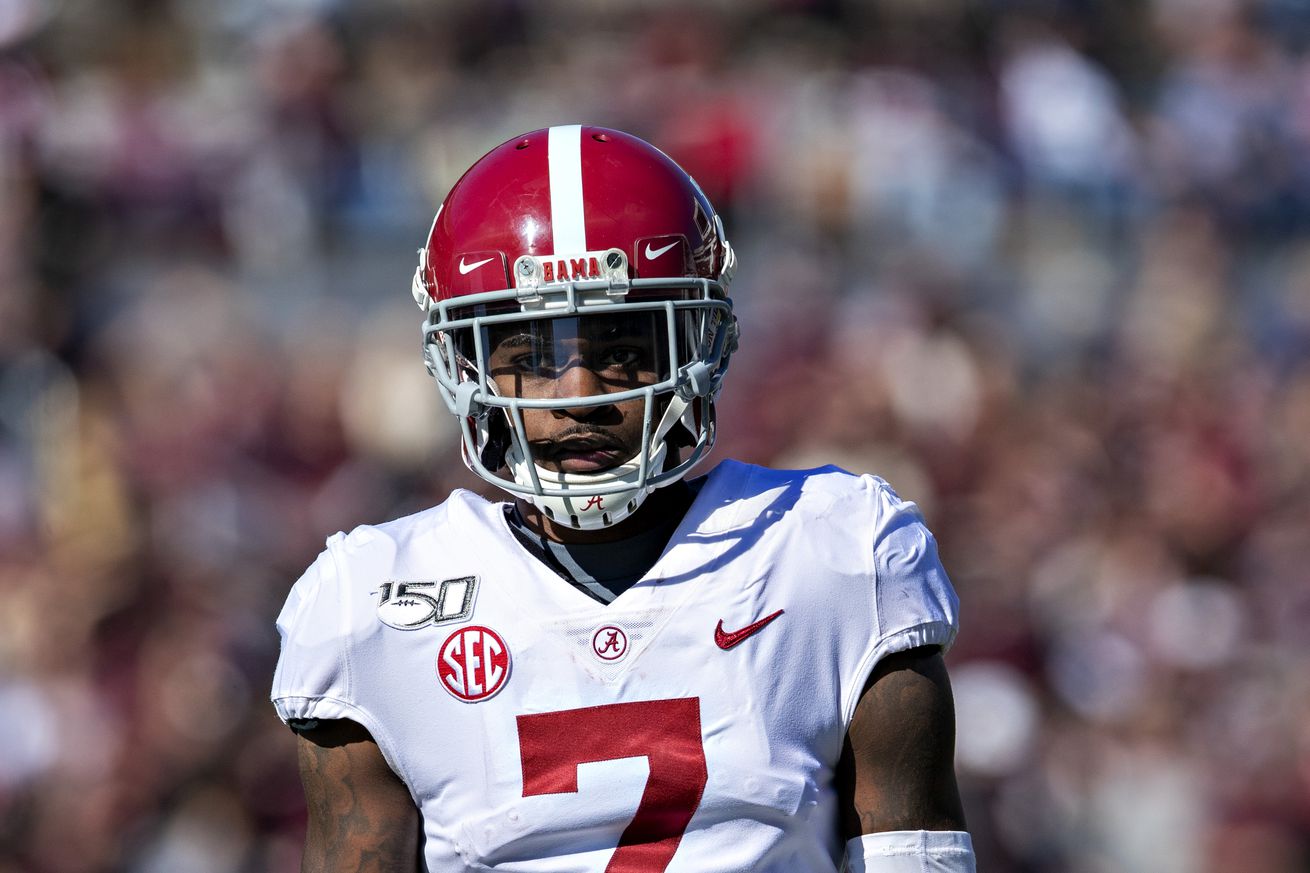 Wrapping up all the Cowboys news.

Can Cowboys rookie Trevon Diggs earn a starting job? Having a star NFL receiver for a brother may help – Michael Gehlken, DMN

The Cowboys second-round pick is fighting for a starting spot, with a little advantage.

The Cowboys cornerback and second-round pick lived and trained in Miami with his older brother, Buffalo Bills wide receiver Stefon Diggs. The experience of working against a top NFL receiver so willing to provide him advice figures only to bolster Trevon Diggs’ bid to earn a starting job in 2020.

In South Florida, Diggs regained some of that with Stefon.

“When I was in high school, we trained together every day,” Diggs said in a Thursday conference call with reporters. “It felt good to get back and train with him every day. He’s in the NFL, so he knows what it takes. Therefore, I was following his lead and just competing with him every day to try to get better, trying to perfect my craft. It’s been a blessing. It was a blessing that we were able to have a home and training facility, somewhere to run routes. I’m getting a look every day, so it was good.”

Here in Texas, Diggs said that he still speaks with Stefon every day.

The two are not currently scheduled to face each other in a game for at least the next three seasons. So competing when football isn’t in session will have to suffice.

“I won the majority of the time,” Diggs said of their route work in Miami. “We kind of stopped doing it a little bit because I felt like he got an idea of what was going on. He doesn’t want to show me too much, but I tried to get as much work with releases and things like that. I was happy.”

Final roster cuts always produce a few surprises every year for each team, and the lack of preseason games this time around may add to the craziness. Considered by many to be a surefire starter, HaHa Clinton-Dix would be a very surprising cut.

As of now, Ha Ha Clinton-Dix appears to be penciled in as a starter next to Xavier Woods at safety. But things can change quickly in the Texas heat. And Clinton-Dix would not be the first free-agent safety the Cowboys have elected to part ways with.

Last season, the Cowboys signed veteran safety George Iloka as a free agent on a one-year deal just like Clinton-Dix. But Iloka didn’t make it past final cuts and didn’t play in the league at all last season. Back in 2013, Dallas signed a free-agent safety from the Pittsburgh Steelers named Will Allen on a one-year deal. Allen would get two starts in five games and was then suddenly released in early October.

Of course, Clinton-Dix is in a different situation. He’s a former first-round selection who has a history with new Cowboys’ head coach Mike McCarthy. Still, like Iloka and Allen before him, he’s only on a one-year contract in Dallas.

Film room: 3 Cowboys left out of this year’s NFL Top 100 who could make it in 2021, including a potential first-timer – John Owning, Dallas Morning News

The NFL just finished unveiling their annual list of top 100 players, as voted on by fellow players, and the Cowboys had a few of their star players miss the cut. La’el Collins, among others, is a prime candidate to correct that next year.

The improvement La’el Collins displayed in 2019 is nothing short of incredible. He went from an inconsistent tackle in 2018 to one of the NFL’s best in 2019.

In the run-blocking department, Collins has been effective dating back to his rookie season. At 6-4, 320 pounds, Collins is so powerful that he can create some serious movement laterally and vertically off the line of scrimmage. Double teams featuring Collins and Zack Martin have been exceedingly effective since Collins made the switch to tackle a few years ago.

After being snubbed from a Pro Bowl berth and All-Pro nomination despite playing at that level, it shouldn’t be a surprise that Collins was also left out of the NFL Top 100.

The Cowboys are trying to get bigger in the trenches under Mike Nolan and Jim Tomsula, and that favors Justin Hamilton. With Dontari Poe failing his physical, it opens up the window even more for the oft-overlooked defensive tackle.

Listed at 6’2″ and 315 lbs., Hamilton is a true space-eating defensive tackle. His game is based on size and power, lacking the quickness and moves to do much as a pass rusher.

Dallas has plenty of the latter right now. In addition to the returning Trysten Hill, the Cowboys signed veteran Gerald McCoy and spent a 3rd-round pick on Neville Gallimore this offseason. These guys are all of the more athletic variety.

But their other veteran DT signing, Dontari Poe, still hasn’t full recovered from offseason quadriceps surgery. The project starter as the 1-technique DT this year, Poe was placed on the PUP list two days ago and won’t rejoin the team until he passes a physical.

Looking for some players to elevate their games to an even higher level.

Nick Eatman: We’ve seen plenty of players shine during their “contract year.” So I’m actually predicting that Xavier Woods has a breakout season. Let’s see if this new defensive front will change things on the back end. I think having a veteran such as Ha Ha Clinton-Dix will help Woods become even more of a playmaker. The Cowboys have actually been linked to a couple of big-name safeties in recent years and probably had some interest in making a trade. For whatever the reason, it didn’t happen. I’m not completely suggesting that Xavier Woods is the reason they didn’t make these trades, but to them, the position isn’t as bad as others might suggest. I think Woods will have a really good season and I’m even predicting a career-high in interceptions with five. That won’t help the Cowboys re-sign him, but it could help them with their defense this season.

Rob Phillips: Sure, one can argue Michael Gallup already had his breakout season in 2019. At 23 years old, he became the third-youngest receiver in Cowboys history to reach 1,000 yards in a season. It’s easy to forget Gallup missed two games in late September after a knee scope, because he still managed to post 66 catches for 1,107 yards and six touchdowns. But there’s another level Gallup can reach – a Pro Bowl caliber level, even with Amari Cooper as the featured receiver and running back Ezekiel Elliott as the offense’s engine. According to STATS, the Cowboys’ offense tied for the fourth-most drops in the league last year (24), and Gallup’s six drops tied for fourth. (Patriots star Julian Edelman led the league with nine.) If Gallup can finish just a few more plays, who knows how good his numbers can be – even in an offense with this many options. He absolutely has No. 1 receiver type talent.

David Helman: Maybe this is cheating, because Chidobe Awuzie has been a starter on this defense for three years. Still, there aren’t many guys on the roster who could use a big season more than him. Obviously, the top priority is that this defense needs some consistency in the secondary. Awuzie has been solid way more often than not in my opinion, but you also can’t deny that he got picked on at times in 2019. With Byron Jones off to Miami, the Cowboys need a cornerback they can rely on every week. On an individual level, this is also a huge moment for Awuzie’s career. Remember, it was just two years ago that Jones was at a similar crossroad. Then, Kris Richard showed up and helped turn him into an All-Pro corner who is now an $82 million man. Hopefully, Mike Nolan and Al Harris can have a similar impact on Awuzie. If he can take his game to another level, it would help this defense tremendously – and it would also set Chido up for a nice pay day when his contract expires at the end of the year.

Our weeklong 53-man roster project came to a close on the latest episode of Girls Talkin ‘Boys. Listen in to find out who made the cut.