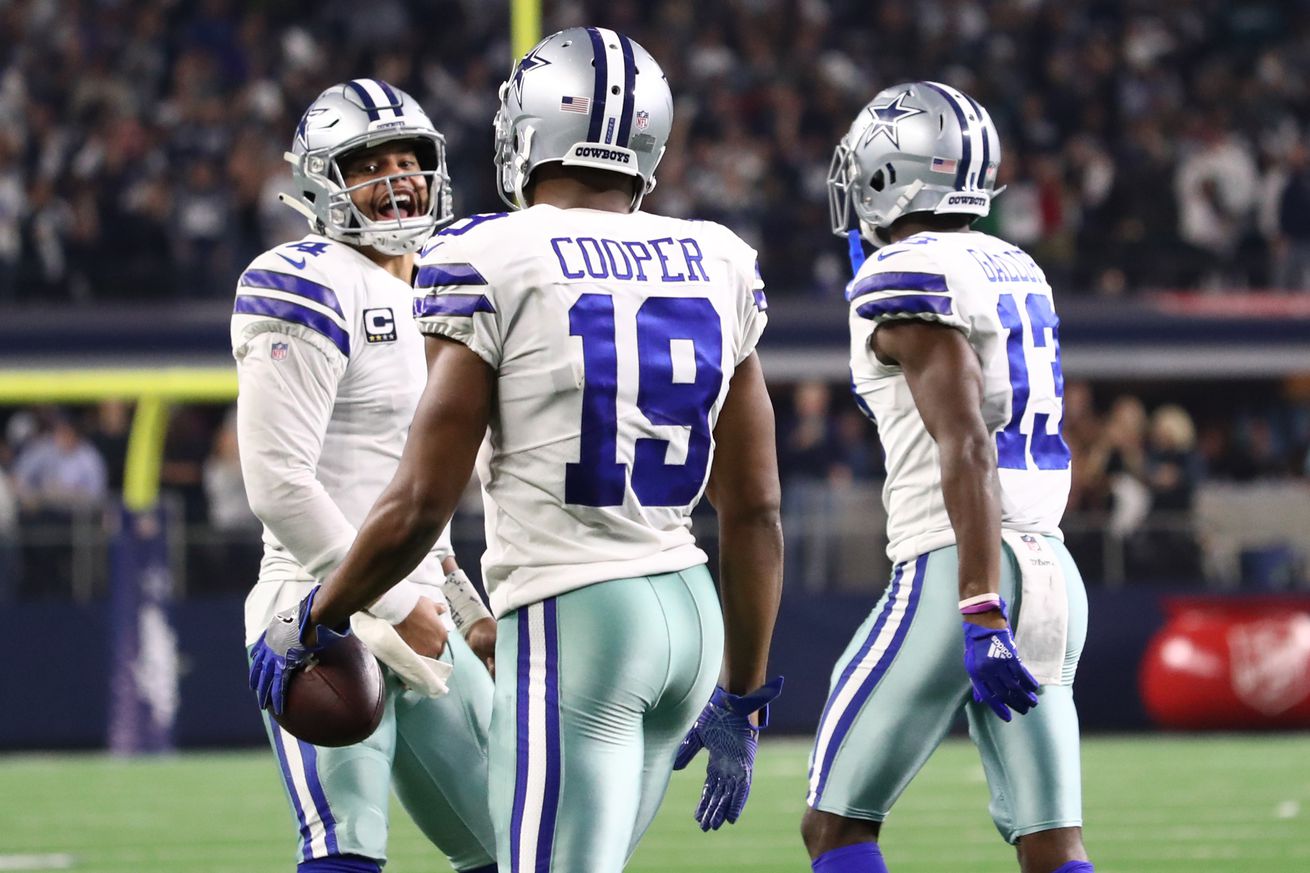 It is hard to not get excited about the Cowboys passing attack.

You have heard it all offseason long: we are all excited about the potential of the Cowboys passing attack this year.

Dak Prescott is back, albeit on the franchise tag, Amari Cooper inked a long-term deal in free agency, Michael Gallup is coming off of a breakout sophomore campaign and CeeDee Lamb enters the picture as the team’s first-round draft choice.

Prescott threw for career-highs in touchdowns (30) and yards (4,902) a season ago with Kellen Moore calling plays for the first time, while both Cooper and Gallup eclipsed the 1,000-yard mark. Adding Lamb, who was an All-American selection and regarded as one of college football’s best players during his career with the Oklahoma Sooners, has to put fear into the minds of opposing secondaries.

As the Cowboys prepare for the upcoming season, Prescott has been working out with his star-studded trio. Cowboys vice president Stephen Jones is excited just like the rest of us, and he even went as far to say “I don’t think we’ve seen anything like it”.

Cowboys VP Stephen Jones told the team’s website that Dak Prescott has thrown with CeeDee Lamb, Amari Cooper and Michael Gallup this off-season. “This receiving corps is going to be something else. I don’t think we’ve seen anything like it.”

The ongoing COVID-19 pandemic has altered this offseason in a major way, potentially impacting Lamb’s adjustment to the professional level and the offense learning a new system. Therefore, it is encouraging to see that they are able to get some repetitions in ahead of training camp.

Pro Football Focus recently ranked the Cowboys’ WR corps as the best in the entire NFL, ahead of Tampa Bay (consisting of Mike Evans and Chris Godwin) and the Atlanta (headlined by Julio Jones and Calvin Ridley).

Dallas had one of the most efficient passing offenses in the league in 2019, and it started with Amari Cooper and Michael Gallup becoming one of the NFL’s best receiving duos. The Cowboys’ passing offense has been far more efficient since Cooper came to Dallas in 2018, as evidenced by the 122.0 expected points added (EPA) on his 907 plays compared to just 2.95 EPA on 425 plays without him. Cooper’s slick route running is a big reason for quarterback Dak Prescott ranking second in the league with 197 “open” throws beyond the sticks last season. Plus, the 26-year-old wideout finished third in the league with 503 yards on deep (20-plus yard) passes.

Gallup’s rookie-to-second-year jump is a big factor in why PFF is high on the Cowboys’ receivers group. The Colorado State product emerged as a legit threat for Prescott and forced defenses to think twice about focusing solely on Cooper.

Gallup took a huge step forward in his second year and became one of the league’s most effective intermediate (10-19 yard) threats, ranking ninth in the league with 483 yards in that range. Now throw first-round pick CeeDee Lamb into the mix, and Dallas will compete to have the best group of receivers in the league. Lamb can win on the outside or in the slot and has an excellent feel for creating yards after the catch; he averaged 11.0 yards after the catch per reception last season. He may start out working mostly in the slot, but Dallas now has three legitimate receivers for defenses to contend with, and each of them can line up anywhere on the field.

The loss of Cobb, even with the addition of Lamb to the offense, does leave somewhat of a question mark. Without a proven fourth option behind the Big Three, the Cowboys are banking on Cedrick Wilson or Devin Smith to step up and provide quality depth. After all, we have seen both Cooper and Lamb miss time due to injury.

However, let’s not forget that Dallas got 828 receiving yards and 6.1 yards after the catch per reception (10th) out of Randall Cobb in 2019. Even if Lamb is as good as advertised, Dallas was already just 11 yards away from having the most productive trio in the league in 2019. The No. 4 spot is wide open, but former second-rounder Devin Smith is the most intriguing name of the group, as he showed flashes of the deep speed that made him a high draft pick in 2015. However, he finished with just five catches for 113 yards in three games last season.

More of a reason to be excited about what this passing offense can potentially do is the hiring of head coach Mike McCarthy. The former Green Bay Packers head coach won a Super Bowl in Wisconsin, although it does help to have Aaron Rodgers tossing the rock.

Still, McCarthy is a veteran offensive coordinator and play-caller that has had success teaching and developing the quarterback position. That has to be exciting news when factoring in that Prescott is on an upward trajectory. With Kellen Moore remaining in the building, it will be fascinating to see how the duo of the veteran coach and the young mind mesh while designing the offensive system.

Throw in tight end Blake Jarwin and running backs Ezekiel Elliott and Tony Pollard and the potential for the passing offense is through the roof. The league has never been more quarterback-driven or passing-centric, so it is comforting to know that the front office is willing to invest resources to that part of the game (even though Prescott still remains left unsigned long-term).

Now, all we need is kickoff to arrive sooner rather than later.