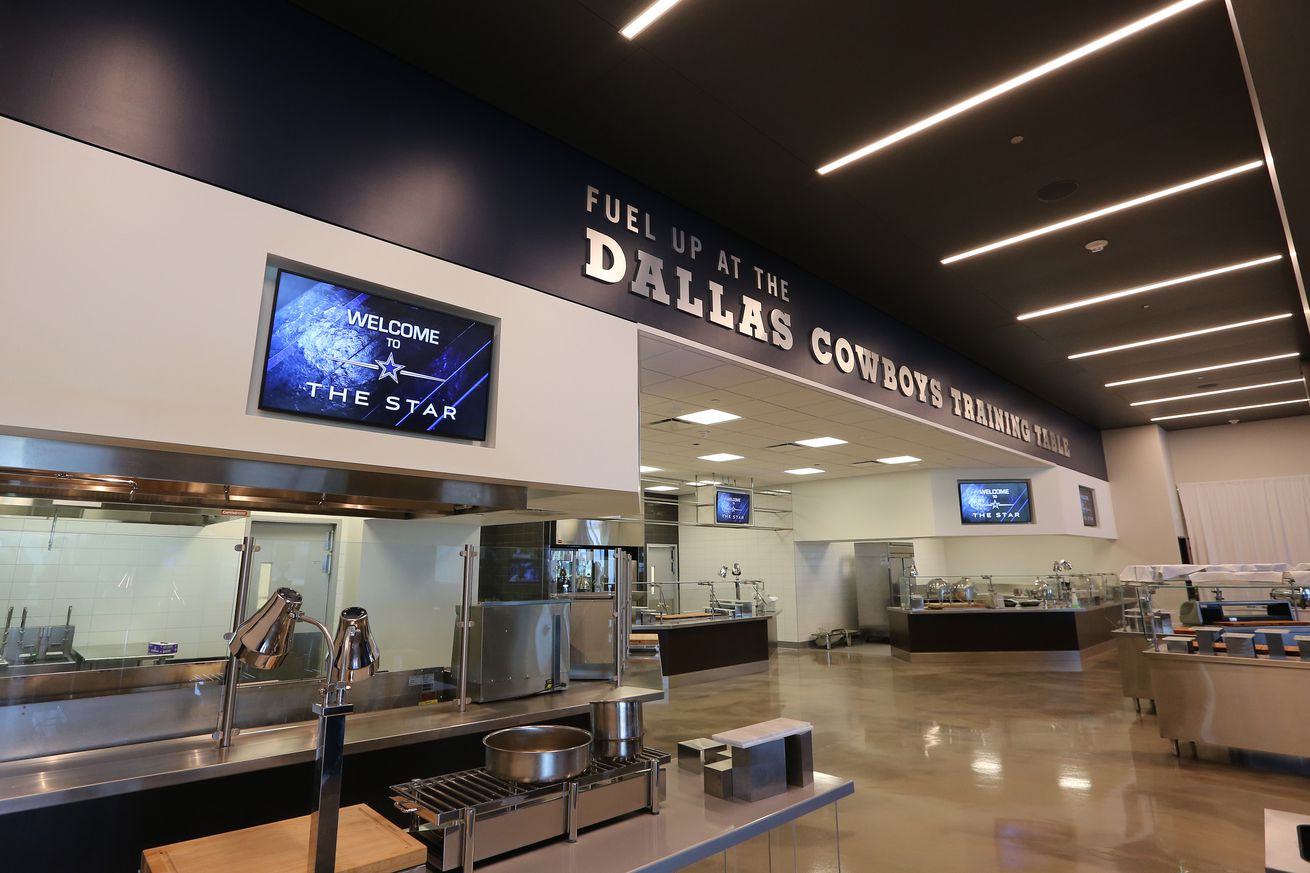 Here is your Sunday edition of Cowboys news…

Attention BTB Members: On Monday, August 3rd, SB Nation will start rolling out a fresh and modern update to their comment section that has been long overdue. The new makeover, which we are very excited about, will take effect at Blogging The Boys on Monday, August 3rd, but at some point during the change some memberships may be affected and you’ll temporarily lose the ability to comment. If this happens you will see a prompt with an email to contact support to rectify the situation as soon as possible. This issue is not a BTB issue, but a system-wide issue, please note that SB Nation, not BTB, will have to rectify any problems. So please use their contact email address in the prompt you will receive if there is a problem. Thank you for your understanding.

On to the Cowboys news o’ the day.

There have been quite a few changes at The Star to accommodate new safety protocols amidst the pandemic. A tour through the new-look facility.

The club formed a COVID-19 task force roughly three months ago. The group of 10 to 12 employees from various departments has met at least twice a week, utilizing data analysis and metrics from the Duke Infection Control Outreach Network (DICON) and consulting with epidemiologists from the Baylor Scott & White Health system.

Thermal scanners, contact tracing bracelets, sanitizing boxes that utilize UV light, plexiglass barriers between lockers and a different way to do laundry are just some of the measures the Cowboys have adopted. The club’s response will continue to evolve.

Tracking the impact of COVID-19 as it pertains to Cowboys upcoming opponents.

NFL players have until August 3 to use the option for the upcoming season and have their contracts pushed back a year. The NFLPA and league officials have agreed that if a player opts out in 2020, there will be no pay in regards to their salaries but instead a loan to help these players financially in 2020. Players that are ruled to be in the “high-risk” category will earn $350,000 for the upcoming season, and those not in that category will earn $150,000. While everyone is concerned about the safety of each individual, there are on-field impacts to players opting out.

Here are the big ones from the NFC East teams, but check out their site for the full list from each of the Cowboys opponents.

The league was going to experiment with some expanded communication tactics this year to see if it could improve the game. However, due to repercussions of COVID-19, that idea has now been put on the back burner.

NFL Network’s Tom Pelissero reported Friday that expanded use of booth-to-official communication — a development that originally was to be experimented with during preseason games — will not be implemented for this season, per sources. The lack of preseason games will prevent any test cases involving touching of a loose ball, complete/ incomplete/intercepted passes, spotting the ball and down by contact.

It’s not just the Cowboys players that face a new reality as the DC Cheerleaders have some adjustments to make as well.

“I am about five days away from checking into our bubble,” Finglass says in the video, “which is where we’re going to be holding training camp this year and preparing for a very interesting NFL season while we are doing all of this in a pandemic. So right now we have 50 ladies, 29 veteran candidates and 21 rookie candidates that are all coming to training camp in a bubble that will be safely quarantined and actually sequestered together while we make our team.”

Cowboys mailbag: Is Dak unhappy? Which players are ready for a breakout year? – Jon Machota, The Athletic

A little Q&A about Dak Prescott.

Why is Dak Prescott unhappy in Dallas, per Bryan Broaddus? – Kyle T.

I don’t know that Dak is unhappy or if that report was more about former coaches’ opinions on how they think Dak feels about not getting a long-term deal from the Cowboys. I’m sure he’s disappointed. Anyone would be in that situation. I don’t think that means he’s pissed and he wants out no matter what happens going forward. I believe he genuinely likes playing with his current group of teammates and would prefer to remain the Cowboys’ quarterback for the rest of his career.

And I don’t think playing under the franchise tag is going to hold him back. If he is mad with anyone in the organization, it would be management, not the players or coaches he deals with on a daily basis. I think he’s about to have a big year with all of the pieces that are in place on this offense.

How DeMarcus Ware opened a fitness center during a pandemic – Todd Archer, ESPN

Cleanliness already was at the top of Ware’s list of concerns before the country was affected by the pandemic, but it has been emphasized even more so now. There are high-tech air filtration systems in each room of 3 Volt. To maintain social distancing, spaces for each workout session have been limited. After a piece of equipment is used, it gets wiped down, and following each class, the room and equipment are sanitized again. Masks are required upon entrance and temperatures are taken as a precaution.

“I want us to go above and beyond when it comes to this,” Ware said. In the first 12 days after opening, 3 Volt sold out its 50 founding memberships and has added more members since. Ware’s long-term goal is to open more fitness centers in the Dallas and Denver areas.

Going position group by position group and determining which areas the Cowboys improved, stayed the same, or got worse – including a surprising addition by subtraction.

Conventional wisdom says when you lose a future Hall of Famer, your group takes a step back, but keen observers know that on the field, Witten didn’t bring much to the table before his retirement or when he returned. Addition by subtraction as Blake Jarwin getting more targets at 3-yards-a-reception better numbers means the tight end position improved. Bell is a much better blocker than Jarwin was as well.

Each franchise has that one team who stood out among the rest. Guess who got the nod for the Cowboys?

But as good as that Cowboys team was, it’s impossible to go against the ‘92 Cowboys, a team that also featured of a slew of Hall of Fame talent. Led by their Hall of Fame offensive trio of quarterback Troy Aikman, running back Emmitt Smith and receiver Michael Irvin, Dallas averaged nearly 39 points per game during the ‘92 playoffs. In Super Bowl XXVII, the Cowboys scored 52 points behind a spectacular showing from Aikman, who threw four touchdowns while completing 70% of his passes. The Bills’ explosive offense was held in check by a dominant Cowboys’ defense that featured Hall of Fame pass rusher Charles Haley, linebacker Ken Norton Jr. and safety Darren Woodson.

The ‘92 Cowboys’ greatest moment may have taken place in the NFC title game, when they defeated Steve Young, Jerry Rice and the rest of the 49ers at Candlestick Park.

The Cowboys made a few roster moves on Saturday.

So much for a potential kicking competition.

The Cowboys have released Kai Forbath, their kicker for the final three games last season and one of two kickers on the training camp roster until Saturday. Forbath’s release makes veteran Greg Zuerlein the only kicker in camp. The Cowboys signed Zuerlein to a three-year, $7.5 million deal in late March just six days after re-signing Forbath, who went 10-for-10 on field goal attempts in three games last December.

The move may just be a matter of simple math.

Teams must trim their roster from 90 to 80 players by Aug. 16, however – a new provision in the agreement between the NFL and NFLPA as the league makes plans for training camp and the season amid the nation’s COVID-19 crisis. Padded practices are scheduled to begin Aug. 17.

Forbath’s release caps off a handful of roster moves for the Cowboys this week.

Remember when the NFL Top 100 happened this week? There were some Cowboys present and we need to talk about them.