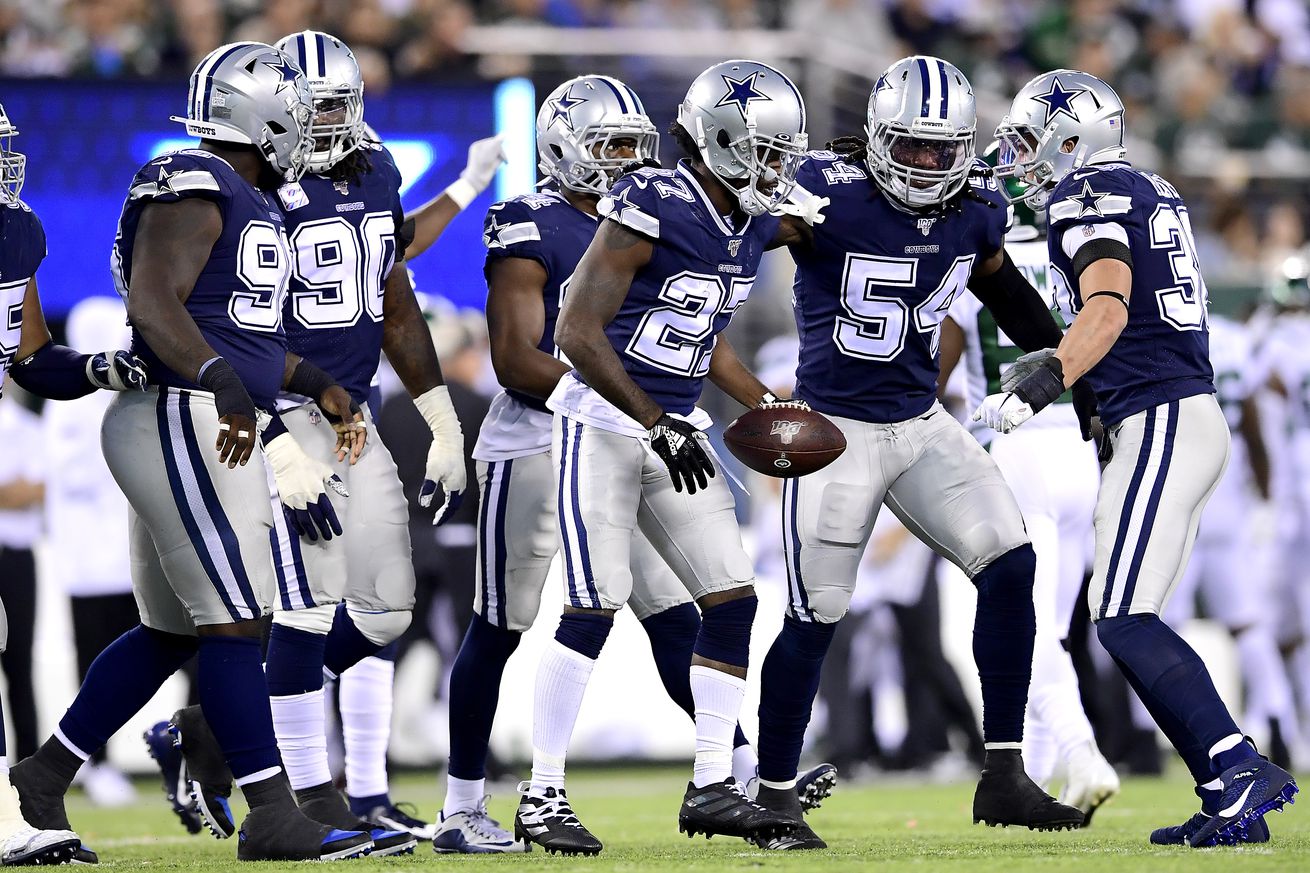 Check out the latest news surrounding the Dallas Cowboys here.

Do they even want to keep a fullback on the roster?

With Jamize Olawale opting out of the 2020 season, how do you think the Cowboys will address the fullback position?— MATTHEW K / DALLAS, TX

David: Let me tell you about a guy by the name of Sewo Olonilua (“Shay-woe. Oh-lah-nah-loo-ah”). In my mind he’s one of the most intriguing undrafted free agents in this year’s rookie class. The former TCU running back is 6’2, 232 and can run a 4.66 time in the 40. He ran for 1,624 yards during his four years at TCU as part of the Horned Frogs’ backfield platoon, and he caught another 60 passes. He’s got the bulk to block, and he’s got the athleticism to do a lot more. If Mike McCarthy wants to keep a fullback in Olawale’s place, this is the guy that intrigues me the most.

Rob: Olawale played only about 10% of the offense’s snaps last year and was primarily a special teams contributor. But McCarthy did utilize the fullback position in Green Bay, so it’ll be interesting to see what the Cowboys do here. Right now, Olonilua is probably the only backup on the camp roster with the size to transition to a lead-blocking role. As Dave said, he also can contribute as a rusher and receiver out of the backfield. Could tight ends Dalton Schultz and Blake Bell help out some in the backfield? Possibly. With no preseason games expected, Olonilua and the undrafted rookies just don’t have many opportunities to stand out. But with no veteran replacement, he would seem to have a real chance.

The first domino has fallen for the Cowboys – Tom Ryle, Blogging The Boys

How the Cowboys might deal with the fullback situation.

Fortunately for the team, this does not exactly imperil the playbook. Olawale was only on the field for about 11% of the offensive plays last year, and provided more value as a special teams asset. The position has become increasingly irrelevant in the pass-happy NFL. However, a fullback was one roster position that the Cowboys insisted on having while Jason Garrett was head coach. There is evidence in Mike McCarthy’s history that he, too, will want to have one. It was generally believed that Olawale had a spot on the roster, and even hope that McCarthy and Kellen Moore could actually get some production from the position.

Now, that has been chucked out the window. The staff has to figure out if they are going to fill the position or not, and how if the answer is yes.

Suddenly, one of the UDFA signings looms large. Sewo Olonilua from TCU has been listed at the mothership as a fullback all along. He is certainly big enough at 6-3/240. He also drew more attention than most because of his background in college, which was not as a fullback but as a running back, with over 1,600 yards rushing in his four years, and an additional 383 yards as a receiver. That history led to speculation that McCarthy wanted to keep him to incorporate the fullback as more than just a lead blocker. There was even thought that he was a real challenger for Olawale’s spot on the roster. With his ability to carry the ball and average nearly five yards each time, he also could be a way to provide depth behind Ezekiel Elliott and Tony Pollard while freeing another spot.

Dallas Cowboys: Depth will be more important than ever – Matthew Liebl, The Landry Hat

In a season that will be marred by op-outs, yes, depth will be crucial.

The Cowboys already have a ton of question marks at defensive end. DeMarcus Lawrence was the only surefire thing and now, thanks to COVID-19, that may no longer be the case.

While indications are that Lawrence will play this season, there’s no certainty for how long. His wife is due in October and he’s already made his concerns regarding the virus well-known. Should the risk of infection outweigh the reward of playing, there’s a very good chance the Cowboys could lose him for at a few games, if not the entire season. That would obviously be a huge blow for the defense but I don’t think anyone would fault him for opting-out due to safety.

Leighton Vander Esch, Jaylon Smith and Sean Lee are an incredible trio at linebacker but they’ve each also got an injury history. As if it wasn’t hard enough to stay healthy for 16 games, there’s now the added risk of losing a player to coronavirus.

To make matters worse, the possibility of losing so many key players has another added risk: jeopardizing the health of those players remaining out on the field. Let’s say multiple members of the offensive line come down with injury or illness. Suddenly, you’ve got Dak Prescott, in a contract year, behind a makeshift offensive line. This is how serious injuries can happen.

It’s possible to chase more free agents, but they will more than likely see what they have at camp first.

There were also pre-draft teases as they would work out several potential draft picks every year. Then in 2018 when it seemed as though they were ready to land someone such as Juan Thornhill or Taylor Rapp, they instead select a backup defensive tackle.

While Dallas has never wanted to pull the trigger on a big move, they also let some less newsworthy signings slip away as well. Last season, for example, they brought in Indianapolis Colts safety Clayton Geathers for a visit but in the end, he wound up returning to Indianapolis.

Geathers ended up starting 10 of 15 games for the Colts and had 54 tackles with one pick. He’s now back on the free-agent market and while Dallas is happy with the signing of Ha Ha Clinton-Dix, they don’t have a lot of depth behind him and Xavier Woods. They also don’t know how well Woods will transition to strong safety, which is the expectation now that Clinton-Dix is on the roster.

5 Most Intriguing New Players in Cowboys 2020 Training Camp – Jess Haynie, Inside The Star

Who will be starting opposite D-Law?

Aldon Smith has returned looking for redemption and the Cowboys, needing to replace Robert Quinn, are willing to give him that opportunity. And now that Tyrone Crawford is starting camp on the PUP list, Smith could wind up being a starter in Week One.

Nobody expects Aldon to be the same guy he was in 2012. Who of us are? But if he’s even half of the All-Pro pass rusher that put up 19.5 sacks that season, Dallas should have a sufficient player to play on the other end from DeMarcus Lawrence.

While he does turn 31 in September, Smith is reportedly in incredible shape. And remember, he’s avoided over four seasons of NFL mileage that causes the usual physical breakdowns. He may be a better athlete for his age than you might assume.

That’s what so intriguing here; a somewhat unprecedented situation for a player with Aldon’s previous level of play and then the extended layoff. Who knows what he’ll be this year?

CeeDee Lamb in the slot is going to be a problem for most teams this season.

Back on April 23 around noon ET — just hours before the 2020 NFL Draft began — Lamb was a guest on my SiriusXM Radio show, Schein on Sports. Our conversation was superb, and one thing that really struck me was how much he obviously lives for the big moment. He loves having the bull’s-eye on his back. He covets gigantic games, where he can go out and dominate to help his team win. I came away from our talk thinking Lamb’s built to shine on the brightest stage. And then he was drafted by America’s Team.

I don’t know how CeeDee was still available at No. 17, but this selection was highway robbery for Dallas. And the player-team pairing fits like a glove. Lamb has the chops to be a Cowboy and wear the club’s famed No. 88. Put the spotlight on this Oklahoma product — he craves it. Add in his ball skills, acrobatics and dynamic run-after-catch ability, and I think Lamb will become Dak Prescott’s favorite receiver in 2020. Yes, even as a rookie. Yes, even after a highly abbreviated offseason/preseason. Yes, even in a receiving corps that boasted a pair of 1,000-yard guys last season in Amari Cooper and Michael Gallup. CeeDee’s that good. I can’t wait to see him at the pro level.

Should the Cowboys ever leave 11 personnel? We discuss on Tuesday’s episode of The Ocho.