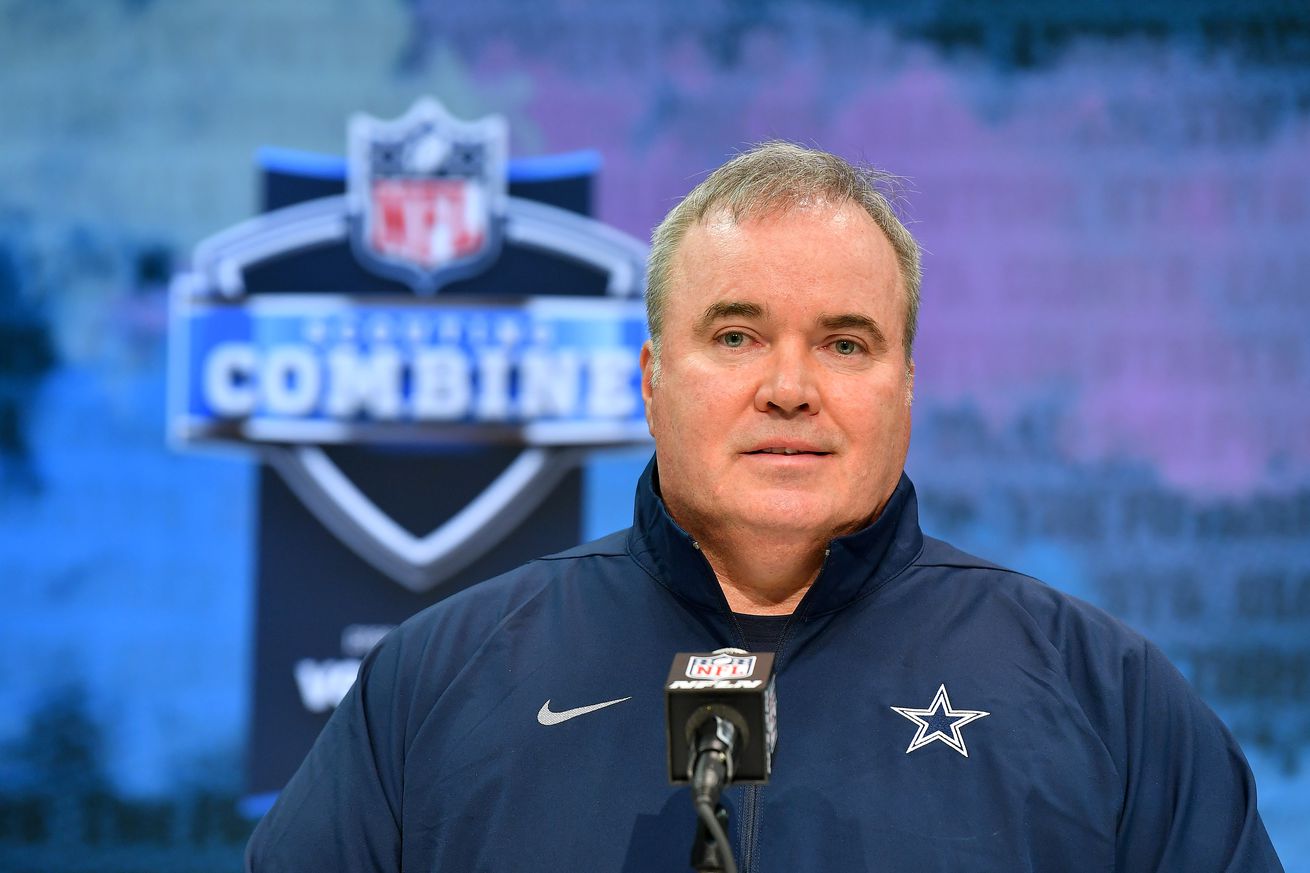 Mike McCarthy opens up on Dak Prescott and more.

McCarthy spoke about Dak Prescott, racial injustice, his impression of the team’s rookie class and his thoughts about Amari Cooper’s declaration that there’s an expectation the club will have three, 1,000-yard receivers this season.

It starts with Prescott. The quarterback didn’t take part in the team’s offseason program as he attempted to secure a long-term deal from the club. The two sides were unable to reach an agreement and Prescott signed a one-year, exclusive franchise tender for $31.4 million on July 15.

Prescott’s absence from virtual meetings doesn’t mean he ignored the playbook. He continued to work out with his teammates, inviting them over to his house for throwing sessions once he had a football field installed.

Still, McCarthy and Prescott didn’t have a chance to spend the time together both would have liked during the offseason. The new head coach was asked to characterize Prescott’s grasp of the offense now that camp has begun.

“I’ll say this,’’ McCarthy said. “I think Dak has done a great job with the time away and really the whole group, the quarterback group with the addition of Andy Dalton.

“The biggest adjustment for Dak is the language, which has been an adjustment for all of us. But he’s looked very good in the throwing segments of the strength and conditioning phase we’re in right now.

“I’m very pleased with where he is and very impressed.‘’

One of the most powerful agents in the NFL today, France also represents high profile clients such as Aaron Donald, DeAndre Hopkins, Grady Jarrett, and Fletcher Cox, among many others.

France began representing Prescott in 2018 after Prescott left his former agent, Jeff Guerriero of ProSource Sports, who had represented Prescott since he entered the NFL.

France was recently and notably at the center of the negotiations between Prescott and the Cowboys, who failed to come to an agreement on a contract extension before the July 15th deadline last month.

As a result, Prescott became the first quarterback in Dallas Cowboys history.

France failed to help two other clients who were seeking extensions at the deadline in edge rusher Bud Dupree of the Pittsburgh Steelers, and safety Justin Simmons of the Denver Broncos, both of whom, like Prescott, will now play next season on the franchise tag.

The Cowboys should be better at linebacker in 2020.

It’s not often a team finds a way to upgrade multiple positions without adding new players to the roster but that’s exactly what the Dallas Cowboys did yesterday when we heard officially, what we all were speculating for months: that Jaylon Smith and Leighton Vander Esch were switching positions.

Before the NFL Draft, Michael Gehlken from the Dallas News reported a series of moves the Dallas Cowboys were planning in 2020. Chidobe Awuzie moving to safety was one of them and LVE and Jaylon effectively swapping spots was another. Now that the Cowboys are back in the building, we’re started to gain confirmation on such moves.

By LVE moving to MIKE, he’ll upgrade Jaylon’s greatest weakness – coverage. While both the WILL and the MIKE have coverage responsibilities, the man in the middle has the arduous task of dropping and flipping vertically in Tampa 2 type looks. While the Dallas Cowboys don’t employ Tampa 2 like they used to, they still use it some form on the regular.

The scheme was especially challenging for Smith since he has well documented mobility issues, and the change of direction demanded by the MIKE in a Tampa 2 (it’s really more of a Cover 3 because the MIKE covers intermediate-to-deep middle) are the toughest of all the linebacker positions.

#1. Lamb will play in the slot

CeeDee Lamb will more than likely spend a lot of time in the slot this upcoming season with both Gallup and Cooper in tow and established on the outsides. What this means is a few things.

First off, it means that he will oftentimes see the less talented defensive backs in the secondary. That also means that his opposing defenders will often times be on the smaller side and definitely smaller than him, with his 6-foot-2 frame.

You also have a bit of pick your poison going on there, but that bleeds into the second reason.

#2. Amari Cooper, Michael Gallup will draw most of the attention

It’s one thing to be a really good player on your own or to play across from one, as in your opposite wideout or what the Cowboys have had since pairing Cooper and Gallup on the outsides. It’s a totally different thing to be a beast in your own right, while playing in between two other beasts such as Gallup and Cooper.

With the amount of attention that will be paid to them, newly minted starting tight end Blake Jarwin, and not to mention the underrated, undervalued, and underappreciated Ezekiel Elliott, Lamb should be in line for a ton of production. That is the second reason.

The NFL has an exorbitant amount of talent at the running back position. There’s tall backs, short backs, light back, heavy backs, fast backs and powerful backs — the NFL has them all, as running back may be the most talent-rich position in the sport. Therefore, for a running back to truly set himself apart from the pack, he has to master the details and nuances that go beyond physical abilities.

Since being drafted in 2016, Ezekiel Elliott has undoubtedly done just that, as he’s separated himself from the pack and has been one of the premier running backs in football since he cleats first touched down on an NFL field.

From 2016-19, he ranked second in rushing TDs (40; Todd Gurley is first with 48) and first in attempts (1,169), rushing yards (5,405) and rushing yards per game (96.5). During that time, we’ve marveled at his consistency, vision, toughness and physicality as he’s pounded opposing defenses into submission.

ESPN’s position group rankings are telling about the strengths and weaknesses of the Cowboys – RJ Ochoa, Blogging the Boys

Where do the Cowboys position groups rank among the leagues best?

The position group on the Dallas Cowboys that has received the most fanfare this past offseason is unquestionably wide receiver. As far as the least amount of hype is concerned, well, it’s probably the secondary (interesting given that those were the positions addressed in the first two rounds of the draft).

The worldwide leader ranked every team by position groups and the Cowboys landed inside of the top 10 in five of them: QB, RB, WR, OL, and LB. Odds are that most Cowboys fans generally agree with this assessment although there are always exceptions.

What’s more is that the four-letter network thinks that the Cowboys have the best wide receiver group in the NFL. There are definitely some challengers to that crown, the Tampa Bay Buccaneers and Atlanta Falcons both come to mind, but hey, the Cowboys drafted CeeDee Lamb.

How would you feel about a 9-7 season?

The 2020 regular season is sneaking up on us quickly, with the opening Thursday Night of the season just about a month away. Since we’re close to the season kicking off, it’s truly prediction time for NFL pundits and fans. Which means it’s time to argue about other people’s predictions!

Bleacher Report put together their predictions for the 2020 season, giving the Cowboys the edge in the NFC East with a 9-7 record.

“Dallas Cowboys owner Jerry Jones is banking on the idea that a new head coach can get his team deep into the playoffs. If Mike McCarthy can get the most out of this roster, he may just be correct. From a talent standpoint, it’s hard not to like what Dallas brings to the proverbial table.”

There’s no question the Cowboys have one of the most explosive offenses on paper in all of the NFL, but the questions around their defense are legitimate.

The Pro Football Hall of Fame Game would have taken place this week. This has been quite the year to say the least. Check out the latest episode of Girls Talkin’ Boys as we discuss.