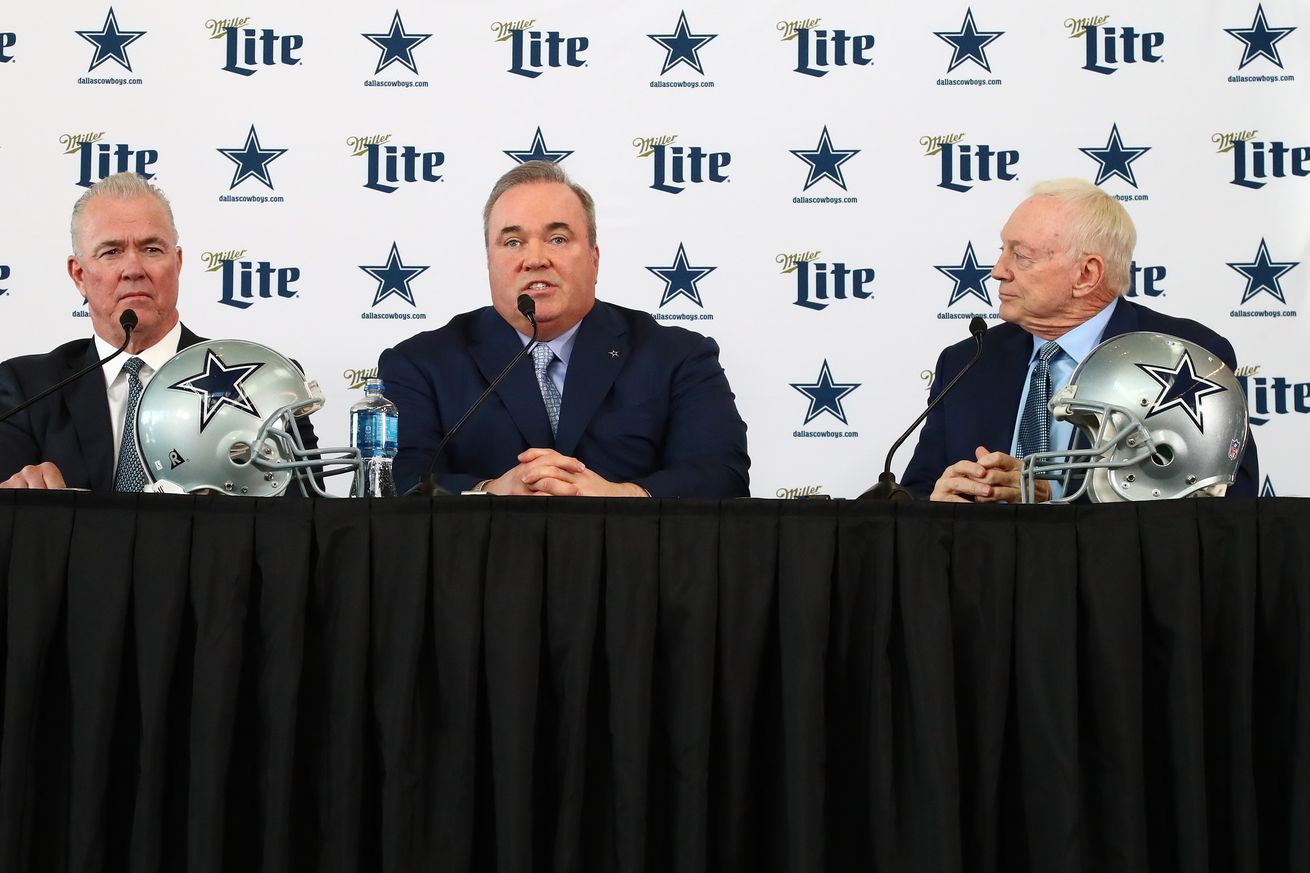 All the updates from Tuesday you may have missed

Jason Garrett finally said goodbye to the Cowboys. Now, Jerry Jones should talk about their future.

Jerry Jones will finally be getting next to a microphone to talk about the Cowboys.

Jerry Jones will hold his annual address on the state of the Cowboys late Wednesday morning.

It comes one day after Jason Garrett finally said goodbye.

After a decade of sharing a stage to proclaim the opening of training camp, Jones and Garrett are now two yachts passing in the night. Yes, as far as we know only one of them owns a 357-foot vessel, but the concept applies.

The coach Jones once hoped would prove to be his Tom Landry is now the offensive coordinator for the New York Giants. Garrett spoke in that capacity Tuesday. Jones, his son Stephen, and head coach Mike McCarthy will answer questions about the Cowboys in Wednesday’s conference call.

As the NFL gets ready to begin their training camps around the league, the Cowboys are starting to take some serious precautions, with players forming their own version of a bubble in the Omni Hotel by the team’s facilities.

There’s no NBA-style bubble going on in the NFL, but the Dallas Cowboys are doing something similar. According to a report from ESPN, many of the Cowboys are going to do a “virtual training camp bubble” and check into a hotel next to the team’s practice facility.

That does seem prudent, though not without some questions.

The ESPN report said a “large number” of players are staying at the Omni Hotel and it’s believed to be a majority of players, coach and staff. That’s fine but it still leaves players unaccounted for. The ESPN report said the team has not mandated players stay at the hotel but have strongly recommended it. So, not really a bubble.

But between the team’s lavish facility in Frisco, Texas and The Omni, there shouldn’t be any need to leave. The Cowboys previously held training camp in Oxnard, Calif., so it will likely have a similar feel. Just with much different circumstances.

Examining the Vander Esch-Smith position swap: Is it the right call for Dallas? – Bob Sturm, The Athletic

Leighton Vander Esch recently revealed that he and Jaylon Smith are swapping positions for the 2020 season. While it’s unclear what exactly this means, some think that it might end up being the best case scenario for both players.

In a nutshell, Vander Esch had the duty of chasing running backs into space and chasing down plays on the perimeter more, while Jaylon would patrol the middle of the defense, spy and blitz the QB and also fall vertically on pass routes that were his job (“Over” routes in Cover 3). Now, if I were to be so bold, I believe they are changing roles a bit.

Perhaps it is to protect the health of LVE. Perhaps it is because Jaylon is looking better and better at running and changing directions (something he could not do in 2017 at all), and they actually want to rush him more as part of a newly robust blitzing defense. Or perhaps Leighton had a very poor year and they are trying to fix two things with one move.

It’s been over two decades since Jason Garrett coached for a team other than the Dallas Cowboys, but on Tuesday he spoke to the media for the first time as the new offensive coordinator for the rival Giants, and he had nothing but nice words for his former team.

“This is the first time I’ve officially spoken to the media since coming to the Giants from the Cowboys,” Garrett said on a video call. “I just want to acknowledge my time in Dallas and how grateful I am for the whole experience and everyone in the Cowboys organization for the opportunity and the support and the lifelong friendships that I’ve made. The players, the coaches and the staff members that were with me and made my life way better, I am eternally grateful to them. And really appreciative to have them in my life and for that experience.

“Awfully proud of the program we built and the teams we had. We had a lot of great days there. So, again, I’m very grateful for that experience and the people that made that experience what it was.

“Having said that, this is a new day and I’m awfully excited about being a part of the New York Football Giants and being back in this part of the country with this amazing organization where I’ve had so many great times in the past. So with all due respect, I’d love to have the questions that we talk about today be focused on what’s happening here with the Giants than Dallas.”

Training camp is starting a little later than normal and there are no preseason games being played, which is sure to have an effect on position battles for the team. The question is what Mike McCarthy and his new staff can do to adapt to these changes.

David Helman: One of my biggest questions about this training camp is whether the coaching staff can manufacture an added level of competition on this roster. Obviously, every day is a competition, and there are still going to be three weeks of practices leading up to the season. But it’s hard to gauge the back of your roster without a preseason.

It makes me wonder if Mike McCarthy & Co. intend to add scrimmages to the schedule – similar to the Blue/White scrimmage we’re used to seeing in Oxnard, except perhaps with more contact. Otherwise, it’s hard for me to imagine the young guys on this team winning many roster battles. Given these circumstances, being a seasoned NFL veteran just seems like too much of an advantage. That’s why I don’t expect there to be a lot of drama with the starting lineup – unless the coaching staff can find a way to let the rookies show their stuff.

Name To Know: Getting A Look At Connor McGovern – David Helman, DallasCowboys.com

Connor McGovern was expected to compete for a starting job at left guard last year before an injury ended his rookie year. Now, McGovern is trying to compete for the same job with a protracted offseason and training camp.

If he’s good enough to win the left guard job, then the answer is obvious – the Cowboys saw him as an improvement over Williams, who has been a solid starter in his own right. The same could be said if he managed to win the center job over an eight-year NFL veteran in Joe Looney and a Rimington Award winner in Tyler Biadasz.But even if McGovern can’t win a starting job, he would still be plenty helpful. Making the numbers work on an NFL roster is all about versatility, and McGovern has plenty of that.

He’d likely be the No. 1 reserve offensive lineman, because he can fill three positions.If you think about the problems the Cowboys have had on their interior offensive line in recent seasons, it’s obvious why that’s important. In 2018, they lost Travis Frederick for the entire season due to Gullian-Barré Syndrome. Connor Williams and Xavier Su’a-Filo both dealt with injuries in each of the last two seasons. Even Zack Martin has faced injury troubles in recent years.

Clearly, quality depth would be nice to have. So even if McGovern doesn’t find his way into the starting lineup, history suggests he’ll have his chance to make an impact.

The Cowboys are in a bubble. That’s a very good thing.