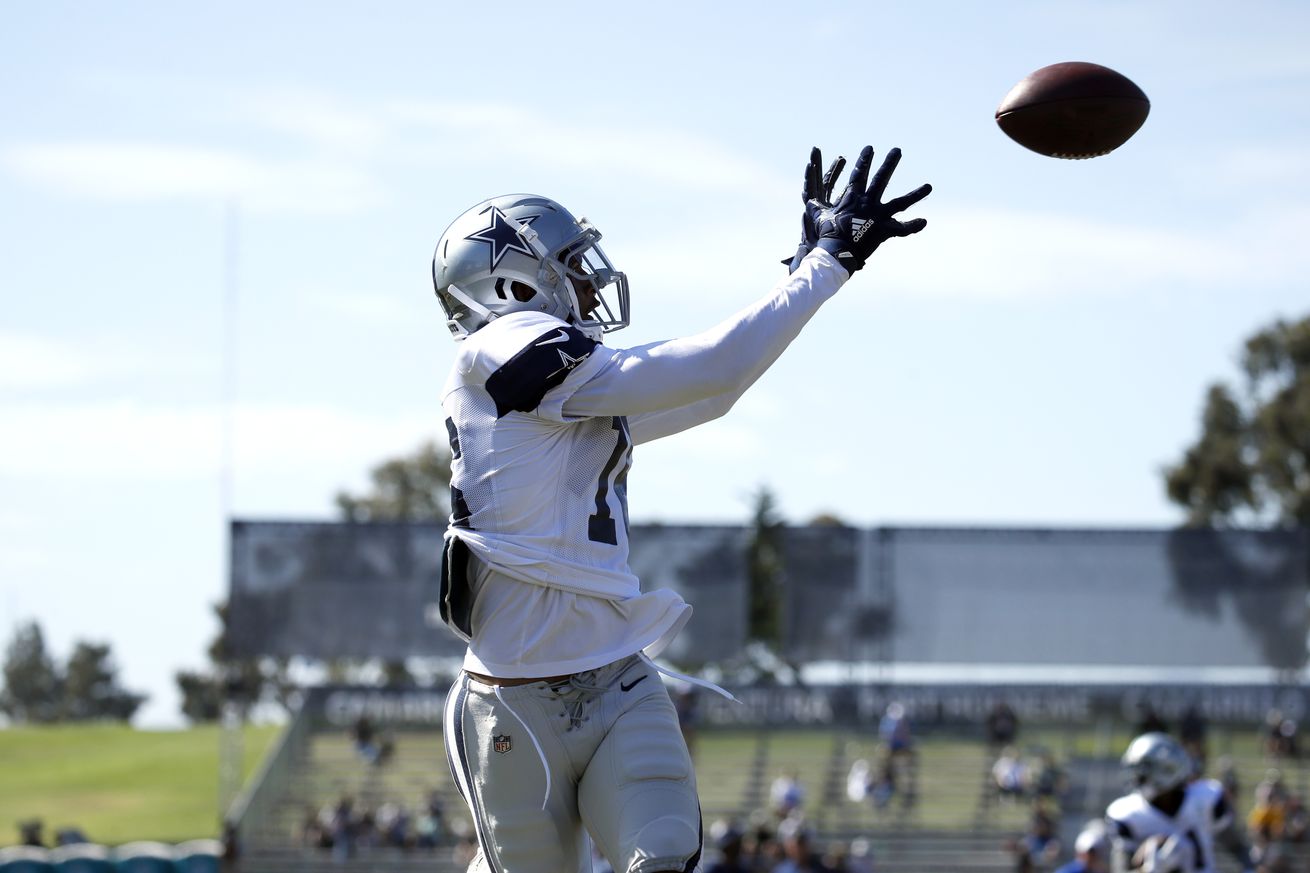 Making his team debut Friday, the Cowboys wide receiver and rookie first-round pick ran an out route during individual drills. He adjusted to a Dak Prescott pass, reaching overhead with his right hand to pluck the ball on the run.

Their absence from the opening practice was never more noticeable than when Lamb reeled in the grab.

In Oxnard, Calif., Lamb would have drawn an approving roar from thousands of spectators. Video of the catch would have circulated on social media. Upon leaving the field, he may have found himself trending on Twitter.

In Frisco, during a pandemic, the buzz was far quieter.

Lamb also took reps Friday at punt returner after returning 54 punts for 475 yards at Oklahoma. The sight of a Cowboys receiver wearing No. 88 and making plays may become the new normal. Again.

That is one way to combat the heat.

Holding training camp at The Star has required the Dallas Cowboys to get creative when dealing with the Texas heat.

The Cowboys set up three cooling tents on an adjacent artificial turf field for players to use during the two practice breaks. In addition to cold towels, water and Gatorade are, yes, popsicles.

“The whole premise of it is to try to take down your core temperature and whatnot,” starting center Joe Looney said. “I’m a big guy with a bunch of hair, so I need it. I’m in there dumping water on my head. I think it’s wonderful. Practicing in Texas presents a different challenge for us, just getting used to the heat. I think it’s an amazing technique that we can go in there, grab a popsicle, cool down and then head back out to practice and hit it real hard.”

For the first time in forever, the Cowboys quarterbacks (smartly) wear red jerseys during practices.

Obviously there were visible changes caused by the national pandemic stemming from the coronavirus.

Coaches and staff members wearing masks and face coverings. Planned spacing and distance measures in certain drills where the players are waiting for their reps. Limited media in attendance, spaced out in both end zone. Those were just some of the many changes that make this year’s camp look so unique to any other.

But at the end of the day, it’s still football practice, a welcomed sight after such a long layoff this offseason.

The most visible change likely has the least effect to the entire team, but it’s certainly a unique sight.

The quarterbacks ran onto the practice field Friday wearing red jerseys. Dak Prescott, Andy Dalton and the other passers definitely stood out among the rest, which of course, is the point. It’s been a rather common practice for football coaches on all levels to differentiate the quarterbacks from the team in an effort to keep them from getting hit and injured.

Just the sight of quarterbacks wearing red had even the most veteran media members and Cowboys staffers wondering the last time of this occurrence, with many of them pointing to the Tom Landry days of the 1980s.

The mothership reviews the first day of camp practices.

Donovan Wilson seems to be picking up where he left off last preseason. The coaching staff gave Wilson an opportunity to work with the first-team defense, and he definitely made the most of it. Wilson read Dak Prescott looking to make a near side throw outside the numbers, and he darted in front of the ball for a nifty interception. It was the first takeaway of training camp for a defense that is stressing the importance of generating turnovers.

Despite the sizable knee brace, Connor Williams was able to take part in plenty of the practice. The coaching staff limited him during the one-on-one portion of practice, but he was able to get some reps during the full-team period.

It’s been a talking point all offseason that the cornerback depth chart is wide open, and it sure looked that way Friday. Every position in the secondary was rotating throughout practice. Chidobe Awuzie and Daryl Worley split reps on the left side, while Anthony Brown and Trevon Diggs split reps on the right side. Jourdan Lewis and Brown split time as the slot cornerback. Xavier Woods and Ha Ha Clinton-Dix were the initial starting safeties, but both Darian Thompson and Donovan Wilson got a chance to work with the starters.

As we’ve seen in recent years, the Dallas Cowboys’ main strength is their offense. But the success of quarterback Dak Prescott and running back Ezekiel Elliott hinges on the stability on the offensive line. With training camp underway, the Cowboys were short a hogmolly during Friday drills.

According to Michael Gehlken of the Dallas Morning News, offensive tackle Cam Erving was absent from practice as he dealt with a minor medical issue unrelated to COVID-19.

The Cowboys were in need for some depth along the offensive line this offseason, especially after swing tackle Cameron Fleming opted to sign with the New York Giants. So, the Cowboys turned to Erving this past May and gave him a one-year, $2.5 million contract, where he’s guaranteed $2 million.

Everyone loves a young, developmental player.

Charlie Taumoepeau is listed at tight end, but the potential for him to moonlight at fullback is especially exciting. Taumoepeau (6-2, 245 pounds) is a little undersized to be a traditional tight end, but his skill set could be optimized in a hybrid fullback/tight end/H-back role.

Taumoepeau is a smooth athlete with soft hands and impressive yards-after-catch (YAC) ability who secured 36 catches for 474 yards and two touchdowns in 2019. His route running certainly needs a lot of refinement — there’s a reason he went undrafted — but he has a strong foundation to build on.

As a blocker, Taumoepeau is much more of a stick-and-shield blocker than someone who can create movement at the point of attack, but he is a willing blocker who understands he has to put the work in to get better in that department if he wants to make it in the NFL.

It originally appeared that Taumoepeau’s ceiling was the practice squad, but fullback Jamize Olawale opting out of the season provides a path to the 53-man roster. Taumoepeau is someone who could finally bring some pass-game production to an H-back role in the Cowboys’ offense if he rounds out his skill set.

The Cowboys have improved in free agency over the last two years.

The Dallas Cowboys don’t like to spend a lot of money in free agency. They just don’t. Executive Vice President/Director of Player Personnel Stephen Jones has reiterated many times that when teams pony up cash in free agency they’re knowingly overpaying. It’s a philosophy the younger Jones sets his watch to and it explains why the Cowboys have built up a history of cautious spending during free agency.

The team’s reluctance in making these larger financial commitments have led them to construct many one-year deals where their investment is minimal. If it doesn’t work out, the Cowboys are off the hook the next year, and it’s on to the next good find. This process has served them well, and more time than not they are cracking this free agent game by getting good value for their money. Granted, these low-risk transactions don’t offer much opportunity for big rewards, but the team is gradually starting to wade out a little further in the free agent pool.

Back in 2017, the best signing the team had was the former seventh overall pick of 2014, Jonathan Cooper, as the Cowboys got him on a one-year, $2 million deal. All Cooper did was start 13 games for the Cowboys, which was just one fewer than he had started in the previous three seasons of his NFL career combined. Earning the starting left guard spot after moving La’el Collins to right tackle, Cooper was a solid contributor along the offensive line. He played well enough to earn a one-year $4.9 million deal with the San Francisco 49ers the following year. However, he was released at final roster cuts. Dallas was fortunate that the best moments of his career just so happened to be in a Cowboys uniform.

In 2018, the Cowboys were extremely frugal in free agency. Players like Allen Hurns, Deonte Thompson, and Kony Ealy (didn’t make the team) were not expected to make a huge splash for the team. The best signing turned out to be backup tackle Cameron Fleming, who signed a one-year, $2.5 million deal. It was a little pricey considering he was just acquired as an insurance policy after the whole Chaz Green debacle of 2017, but it was money well spent as Fleming started three games after Tyron Smith went down to injury. The Cowboys were 3-0 in games he started that season.

Training camp is here. Let’s talk about it.