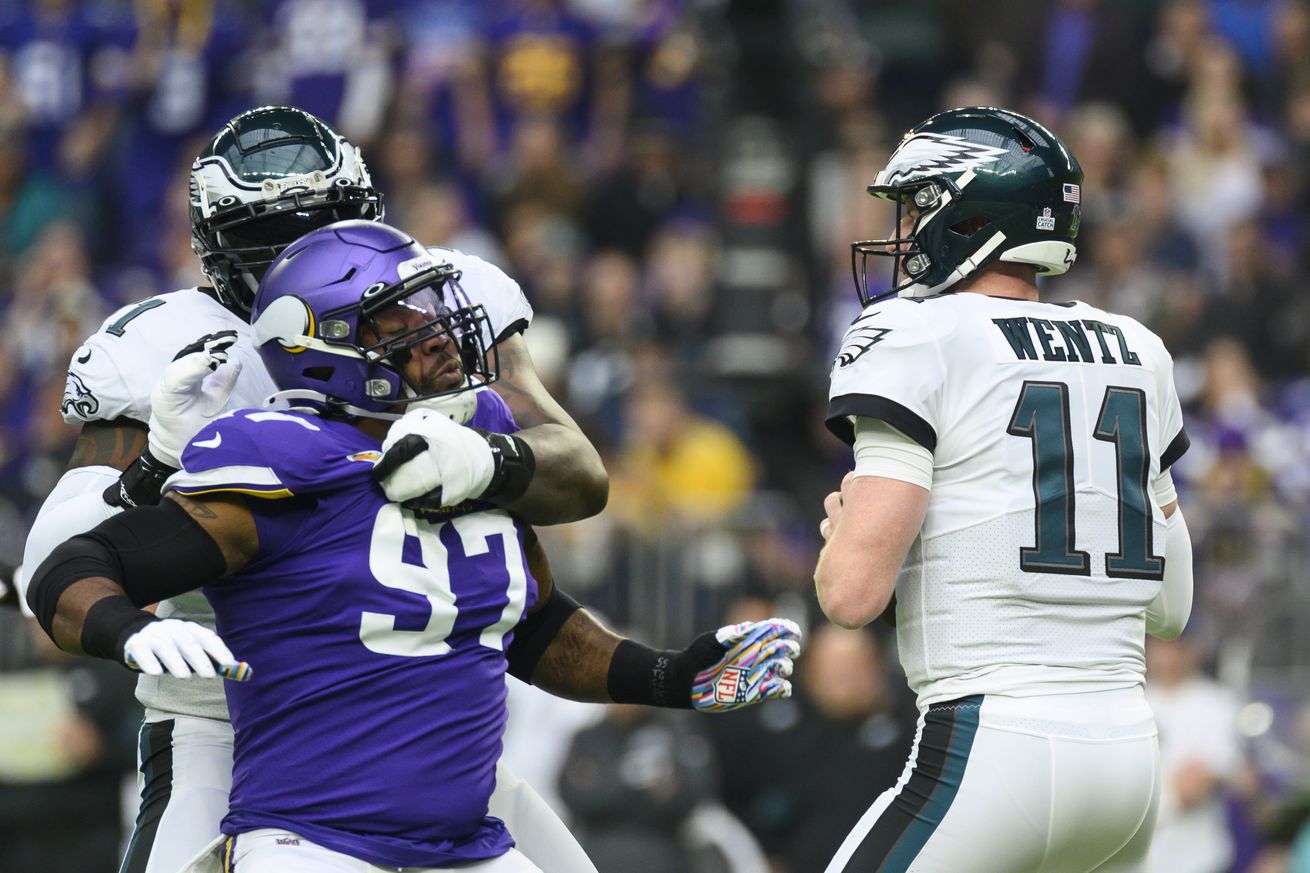 Things just got a little more crowded in the trenches for the Cowboys.

When the news came out on Wednesday that the Dallas Cowboys signed defensive end Everson Griffen, there was a virtual fist-bump across Cowboys Nation. The 10-year veteran has been an impressive pass rusher for the Minnesota Vikings, and now he’ll be lining up opposite DeMarcus Lawrence to help fill the void left by the departure of another veteran stud, Robert Quinn.

Adding Griffen is huge for Dallas, and it’s just the latest example of quality free agent defensive linemen the front office has brought in this offseason. This gives the team a group of six players who are formidable players in the trenches:

That is a great cast of characters to have at their disposal. The flexibility of Crawford allows the team to go with an assortment of combinations as new head coach Mike McCarthy and defensive line coach Jim Tomsula attempt to figure out what will be most effective for this group. McCarthy has gone on record saying that he would like six edge rushers and four interior line players for a total of ten defensive linemen. If that holds true, it only leaves four remaining spots available along the defensive line.

The signing of Griffen makes a crowded position group even more crowded as it’s going to have a trickle down effect on who makes the team. Not only that, but Griffen played 848 snaps for the Vikings last year. He should see a lot of action in Dallas which means it will also alter the playing time of some of the key starters.

But just what type of shake up does this mean exactly? Let’s take a look at the Cowboys defensive line and try to determine how their role might change after this new addition.

Nothing changes for him. He’ll man the left side like he always does. Having a talent like Griffen on the other side will make this tandem one of the tops in the league.

It’s been five years since this former star edge rusher played the game of football, and many people are excited about his return. There is so much mystique about what the team is actually getting. With Quinn leaving in free agency, the opportunity was going to be there for Smith, but that just got a lot more challenging with Griffen now in the mix. Smith is the player most likely affected by this change, but don’t rule him out altogether. He’s still a wild card, and the raw talent was there at one point. If he can recapture some of that greatness, there could be a serious battle on the edge with the Cowboys defense reaping the benefits.

This is super tricky because Crawford can play multiple spots. Before the addition of Griffen, Crawford might expect to see some reps at RDE on early downs as he’s a better run defender than Aldon Smith. With Griffen being good in run defense as well, there might not be a lot of need for Crawford on the outside. He should still get some chances on the inside, but even that group is sitting a lot better than it has been. His flexibility will earn him reps, but he could find himself in a dogfight at each spot as there is some fierce competition for him this season.

A few days ago, McCoy was the most exciting free agent signing. How cool is it that he’s not now? Of course, he’s still a great signing, and one might wonder what Griffen has to do with McCoy’s playing time, but now with a crowded edge, that’s going to push Tyrone Crawford to the inside at times. And when Crawford is playing on the inside, he’ll be manning the 3-tech spot, which is where McCoy should be stationed. This means McCoy will slide over to the 1-tech spot at times to make room for both players. Ultimately, it shouldn’t mean much in terms of losing playing time as it should just help keep him nice and fresh.

Barring any health issues, Poe will be the team’s starter at the 1-tech position and should see a decent amount of action. He could be taken off the field in some pass rushing situations as described above by the McCoy/Crawford combo, and Antwaun Woods will spell him at times too, but Poe’s role on the team should remain an important one as long as his body holds up.

After these first six, where will the Cowboys look to fill out the rest of this position group?

The rookie third-round pick is mentioned here first simply because of the remaining players, his place on the roster is the safest. The added depth will certainly cut into those well-needed snaps to develop himself, but that’s just the world he now lives in. Unless an injury rears its ugly head, Gallimore’s playing time should be minimal this season.

Some are ready to write this guy off because he was real quiet last year, but it’s hard to see the field with players like Lawrence and Quinn rarely coming off it. Armstrong is entering his third year which could be the time he takes the next step, but it’s still going to be an uphill battle to get on the field. The Cowboys need to hang on to some of their younger depth because both Griffen and Smith are on one-year deals, and Crawford is in the final year of his contract. The Cowboys can’t just pull the rug out from under these younger edge rushers they’ve acquired, but they’re going to have to be smart about which ones stick around.

As long as he keeps his head on straight, Woods should secure a roster spot as he finishes out his last year under contract. He’s the team’s top backup 1-tech and considering Poe is coming off injury, keeping Woods on the shelf is a wise move.

Remember what we said earlier above saving up for the future? Well, McCoy and Poe are both on the north side of 30, and ideally it would be great if both Hill and Gallimore were future pieces to the Cowboys interior defensive line. Hill’s going to really need to show up in camp to earn a spot as there’s a lot of good players vying for those final roster spots.

Another development guy to put in their pocket for later, the Cowboys got a great deal when the Utah edge rusher was still available in the fifth round. A few months ago, he seemed pretty safe to hold down a roster spot, but that’s not a guarantee right now. One of these guys is not going to make the cut as we’ll be forced to hold our breath to see if they can sneak him on the practice squad.

This is a guy that landed the last spot on my pre-camp roster predictions, but this seems highly unlikely now. He seems like a prime candidate for practice squad material.

The other guys: Ron’Dell Carter and Justin Hamilton

The great news about having so many intriguing guys who are practice squad candidates is that it increases the chances of some of them slipping through waivers. Every year there are surprises, but the chances of these guys making the team just got a whole lot harder with the addition of Griffen.

Which four would you pick to join the Cowboys six locks?