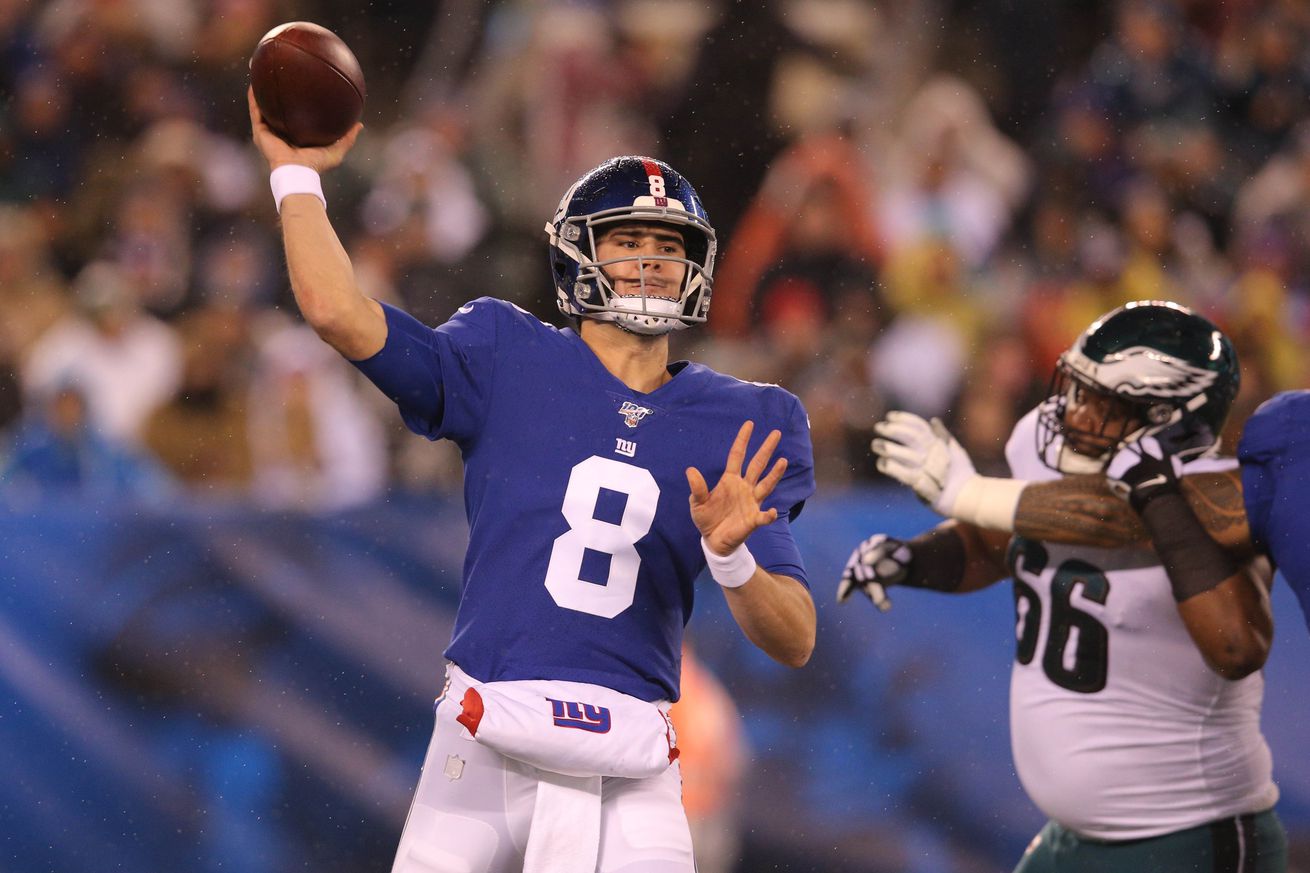 When you go 4-12 it’s hard to look at many things about your team as a true “strength”, but the best thing the New York Giants have going for their young, offensive talent. New York finally moved on from veteran Eli Manning last season, turning over the reigns to 22-year-old Daniel Jones. The former Duke Blue Devil had a very solid first season in the league. Jones threw for 3,027 yards, 24 touchdown passes, and had a quarterback rating of about 88.

Here are 2 more of Jones’ completions from PA in gun. These take a bit longer to develop. First, a perfect deep pass to Slayton, who beat Xavier Rhodes one on one. On the next play, Jones slides in the pocket to buy time, gets to a secondary read to hit Slayton on the deep in-cut pic.twitter.com/BY9nY4GRDu

As you can see from the graphic above, Pro Football Focus graded Jones as the highest-rated passer on play-action from shotgun in the NFL. PFF was high on Jones in other areas as well. According to PFF, he ranked ninth in in quarterback rating on short passes (between 1-9 yards), and was graded as the 14th best quarterback on third down in the entire NFL. The rookie showed some impressive mobility and was able to use his feet to make some plays. Jones played well despite being on a terrible team as a rookie, not something many first year quarterbacks can do.

Daniel Jones was able to make plays like this BEFORE he went beast-mode in the weight room this offseason. #Giants pic.twitter.com/TD9h3h8HMa

Jones showed lots of promise in his rookie year, and his improvement in play will only make star running back Saquon Barkley even better. The former second overall pick rushed for 1,003 yards in just 13 games behind a dreadful offensive line. The talent has always been there for Barkley, he’s arguably the most talented runner in the league, but he has had struggles staying healthy and overcoming bad offensive lines.

Just 31 days until Saquon Barkley is doing this every week for the next four months. #BrawlNetwork #GiantsPride #GiantsChat

New York was finally able to get some offensive line help this offseason which may lead to even more production from the star running back. Jones and Barkley are not the only young talent the Giants have on offense. New York also has wide receiver Darius Slayton, who went over 700 yards last season and talented tight end Evan Engram. They also went out and spent the fourth overall pick on offensive tackle Andrew Thomas.

Darius Slayton, so far, was a knockout pick for the #Giants. His attention to his route running and physicality are traits his college tape didn’t show consistently. It’s there folks. Feel like this is the next Amani Toomer. pic.twitter.com/2BqXGEob4H

The Giants have some young talent on offense, and getting them to continue to elevate their play will be the biggest key to a bounce back season in 2020.

Biggest Cause for Concern

The Giants’ defense was absolutely dreadful last season, and that has to be their biggest cause for concern coming into 2020. The Giants gave up 20 or more points in 14 of their 16 games, giving up 30 or more points in nine of those matchups. They ranked 30th in points allowed, 29th in turnover percentage and NY/A.

The biggest issue for the Giants on defense was their secondary. PFF graded New York as the third worst coverage team in all of football with a remarkably low grade of 44.7. Their defense gave up 250 yards passing to their opponent in 11 games and gave up 320 plus yards of total offense in 13 games.

To make matters worse, young cornerback Deandre Baker, who the Giants spent a first-round pick on in 2019, got caught in legal trouble and likely will not play for the team again.

From NFL Now: It would be a surprise if #Giants CB Deandre Baker ever played for them again, as he remains on the exempt list after being charged with four counts of robbery with a firearm… as NYG appears set to eventually go after his guaranteed money. pic.twitter.com/Al1RukB87Z

Despite the potential loss of Baker, the Giants did go out and add some talent to the secondary, signing 27-year-old James Bradberry to a three-year, $45 million deal. The former Carolina Panther has been a very solid corner during his four years in the league. Bradberry has had at least 10 pass defenses in every season of his career and has eight career interceptions, including three last season. He also has been able to stay healthy, something the Giants’ secondary has struggled with, missing just four games in four years.

21% of James Bradberry’s career coverage snaps have been while aligned against Julio Jones, Michael Thomas, or Mike Evans.

Bradberry held his own when he shadowed the elite NFC South receivers 6 times a season.

The former Panther and new #Giants CB is a true #1 corner. pic.twitter.com/v3Bi3DpU1a

Adding Bradberry will certainly help the Giants’ secondary as a whole, but they still have lots of work to do. At the moment, New York would likely start Grant Haley opposite Bradberry at cornerback, not great. The Giants have some young talent at safety however, including Jabrill Peppers, Julian Love, and rookie Xavier McKinney.

New York will need their safeties and pass rush try to help make up for the lack of talent at the cornerback spot. They brought back linebacker Markus Golden, who recorded 10.5 sacks last season, and are hoping Leonard Williams can produce more sacks in 2020.

The Giants will not be able to be a successful team with a defense, in particular a secondary, that preforms like they did in 2019. If they want to compete for a playoff spot, they will have to hope the addition of the veteran Bradberry and their young talent at safety can help elevate the play of their other cornerbacks.

In 13 games last season Daniel Jones was sacked 38 times, that’s an average of nearly three sacks per game. The Giants knew they needed to protect their signal-caller better and went out and made some additions to their offensive line this offseason. New York spent their first-round pick on tackle Andrew Thomas, their third-round pick on tackle Matt Peart, and signed swing tackle Cam Fleming.

Thomas and Peart will be the Giants starters at the tackle spots. How they preform will likely be biggest X-Factor for their team. They both have tons of talent, but how fast will they adjust to the NFL level in a shortened offseason? That likely is the biggest question for this team overall entering 2020. If they play better than they did last season, it could help the young Giants’ offense take a step forward.