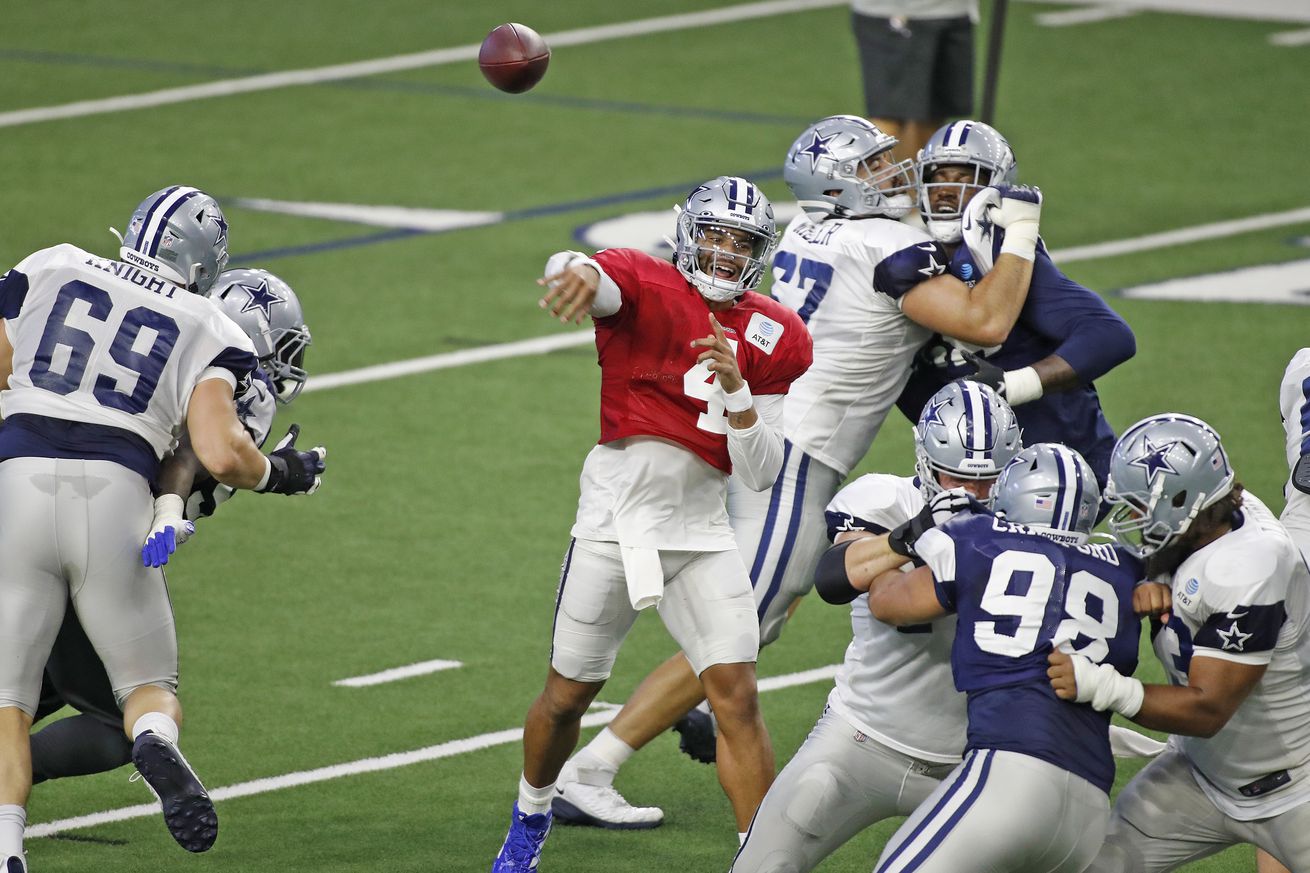 The team is almost back at full capacity on the offensive line, even though they had another injury today.

The left tackle position had a few more bodies running through the individual drills on Thursday, highlighted by the return of the top three on the depth chart. Tyron Smith made it back to practice after missing more than a week with injuries. La’el Collins and Cam Erving also practiced for the first time in camp, both returning from undisclosed injuries.

Smith and Collins were able to participate in individual drills before exiting early to continue their rehab. In the team period, Erving and Brandon Knight worked with the first-team unit.

Tackle Mitch Hyatt went down with an apparent knee/ankle injury and had to be carted off the field.

Even though they are not going against top talent, it’s good to see the Cowboys defensive line getting sacks.

If you were trying to chart all the sacks at this practice, you’d have your work cut out for you. The offensive tackle position is still lacking depth, as neither Tyron Smith nor La’el Collins participated in the competitive portion of practice. As a result, the Cowboys’ pass rushers had a field day. Everson Griffen, Aldon Smith and DeMarcus Lawrence all notched at least one sack. Prescott also had to fend off interior pressure, and Leighton Vander Esch also sacked the quarterback on a blitz.

Special mention for a couple of rookies. Bradlee Anae continues to impress as camp goes along. He mixed into the team period and had plenty of success. Anae racked up a handful of pressures, and likely would have had two or three sacks in live action. Undrafted rookie Ron’Dell Carter also notched a sack from the left defensive end spot.

He suffered the ailment before practice began in earnest, falling to the ground during individual drills at the Ford Center.

With Hyatt on the ground, an athletic trainer appeared to conduct a Lachman test, a diagnostic exercise used to determine whether or not an ACL is intact. The result of that test is not known, and an MRI is expected to provide further clarity on the injury’s nature.

Hyatt, 23, signed with the Cowboys last year as an undrafted free agent from Clemson. He spent most of his rookie season on the practice squad before a December promotion.

The Cowboys have some injuries on the offensive line, but it looks like their rival, the Eagles, are really getting hit hard.

The Eagles will need a new starting left tackle.

Andre Dillard will miss the season after suffering a torn biceps today in practice, Mike Garafolo of NFL Network reports.

With Dillard out, the Eagles may decide to turn back to their longtime left tackle Jason Peters. The plan had been for Peters to play right guard in place of the injured Brandon Brooks this season, but that was when they were expecting Dillard, their 2019 first-round pick, to take the job.

Regardless, the Eagles have now lost two starters on their offensive line, before the start of the season. They’re going to need to scramble to make the best of a tough situation.

Coach Mac isn’t playing, he wants a title… this year.

Mike McCarthy never budged when asked about the pandemic disrupting his first offseason as coach of the Dallas Cowboys, preferring to emphasize challenges around the world over the difficulties of trying to implement his program.

The former Green Bay coach was even more direct when asked how the coronavirus might alter expectations for a club that fell flat amid high hopes last year, leading to his arrival when Jason Garrett’s contract wasn’t renewed.

“If you’re not trying to win a Super Bowl, I don’t know what you’re even doing in this business,” McCarthy said. “The ones that don’t talk about it are probably trying to underpromise, overachieve.

“But I’ve always been very upfront about it with every team I’ve ever coached. We’re in this to win a championship. Make no bones about it.”

Ten years after winning a Super Bowl with Aaron Rodgers and the Packers at the home of the Cowboys, McCarthy will try to help Dallas get past the divisional round for the first time since the last of five Super Bowl titles 25 years ago.

Trevon Diggs Getting up to Speed Quickly With Help From Al Harris – Brian Martin, Inside the Star

With help from Al Harris, the Dallas Cowboys 2020 second-round draft pick Trevon Diggs is quickly becoming one of the better cornerbacks early on in training camp practices. He’s not only been a camp standout from a rookie standpoint, but from an overall team perspective as well. This is great news considering the unknown state of the Cowboys secondary right now.

Early on in training camp practices Al Harris has been giving rookie CB Trevon Diggs a lot of individual coaching. This teacher/student relationship is something that should help the former Alabama stud DB get up to speed more quickly. Of course, coming from a top-notch collegiate program like Alabama doesn’t hurt either.

As a player, Al Harris was known for his physical, bump and run coverage style. It’s that playing style that I believe he will try to instill in his players, which should help shorten Trevon Diggs’ learning curve immensely. He was after all at his best in press man coverage during his time in Alabama.

As far as intangibles go (size, speed, length), Al Harris and Trevon Diggs could be a mirror image of one another. If Diggs allows himself to buy into what Harris is preaching, his learning curve should be shortened by quite a bit. That should allow him to get on the field sooner rather than later, quite possibly as a Day 1 starter.

55-man roster projection, we focus on the secondary picks.

Notes: Many fans would love Earl Thomas’ name to be included here. At this point, the Cowboys will rely on the four players above.