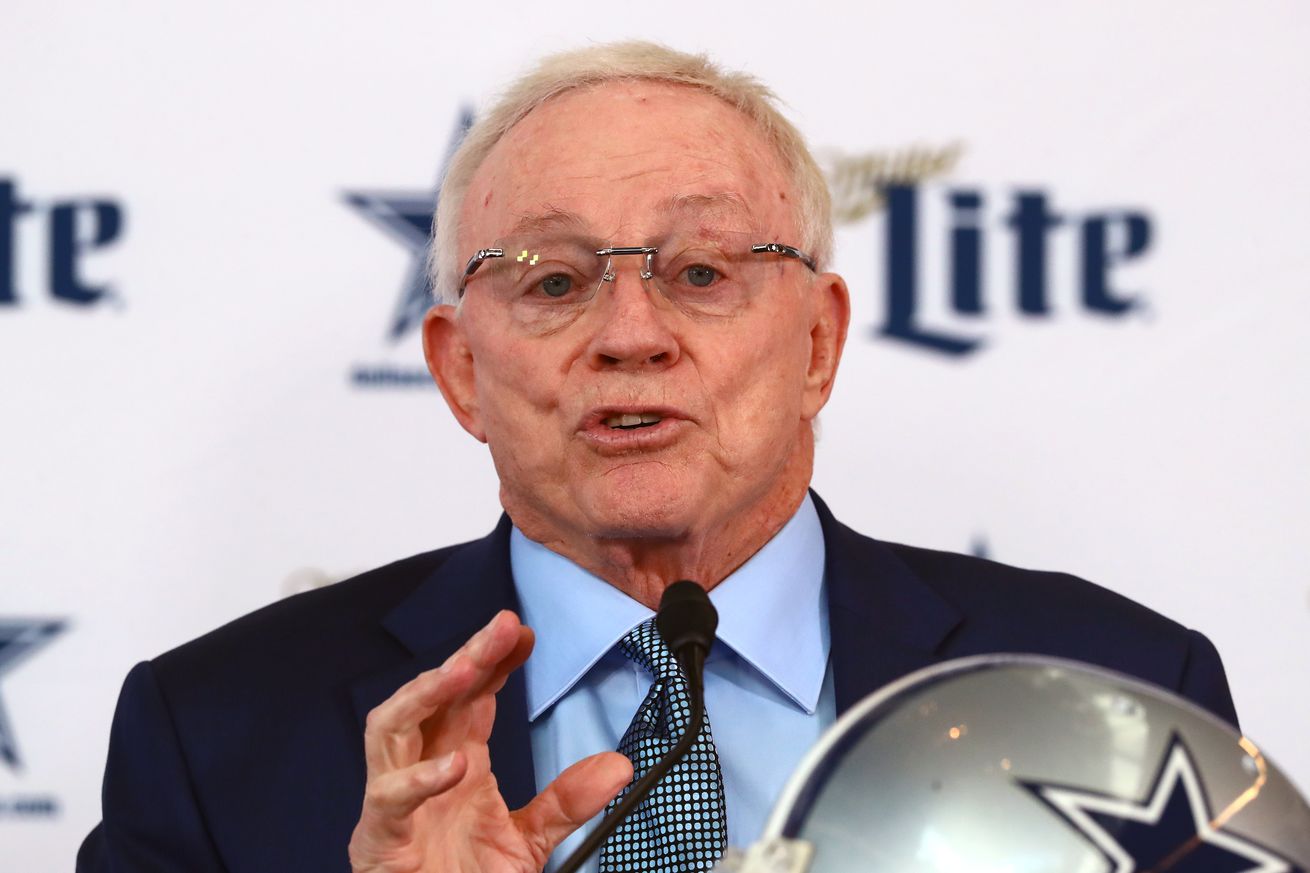 Jerry Jones says 50% capacity for home games is unlikely, but Cowboys will continue to play it by ear – SportsDay Staff

The owner gives some clues about attendance at AT&T Stadium in 2020.

Jones: “Yeah, we know we are limited where our boundaries are. And I think we’re at the official boundaries is 50% capacity. More than likely there won’t be 50% capacity. But things are evolving. I would imagine we can have as many people out there as far as the demand to be out there as we want it. We’ll see how the lay of the land is as we get closer, and sell those numbers of tickets accordingly.”

Can the NFL survive a full year of no fans in some stadiums?

Jones: “Unquestionably. Unquestionably. I think we’ll have — we’ll have variances more than likely as we go through the season. I’m anticipating adjustments for potential outbreak, if you will, and I’m specifically addressing the pandemic. But the keyword is flexibility and adapting to a need to change. And things alter time frame when you can make a decision. Sometimes the awkwardness has to do with the short time frame you make it. I’m sitting here, you ask me a question this morning. And I’m giving you a straight answer because I don’t know how many fans we’ll have in that stadium. Here we are, the Dallas Cowboys, got one of the greatest stadiums in the world, and I can’t give you a straight answer to that. We’re playing it by ear.”

Hall of Fame receiver Michael Irvin revealed on the Rich Eisen Show on Friday that he contracted COVID-19 in late June.

He calls it the worst thing he has ever dealt with.

“I didn’t know I had it, and then I got real sick,” Irvin said. “I mean, a pounding headache for like four or five days. You couldn’t eat. You can’t sleep. You’ve just got to endure the pain. I took two tests. They all came back negative. So I’m thinking, ‘OK, I’m good. I don’t have it. I don’t have it.’ But I’m feeling the pain, and then after I went through about three weeks of hell — about three weeks of hell — I said, ‘OK, I’m going to go and take the antibody test,’ because it had to be something. It had to be COVID. There’s no way I went through that kind of pain, that kind of hell, and nobody knows what it is. Then, I’m scared it may come back. So I took the antibody test, and of course the antibody test, which I think is more accurate, came back that I had the antibodies. My doctor said I should be pretty good now.”

“I pray for anybody who has it,” Irvin said. “The headache, I said to myself, I’m not lying, I wanted out of here. I was like, ‘Man, there’s no way I can even endure this.’ The only thing I kept saying is, ‘You’ve only got two weeks of it. Two weeks. Two weeks.’ I pray for all the people that have those migraines, because it’s severe like a migraine, and they have it all the time. That would be the hardest thing in the world to live with, because I just went through it. It was the hardest thing in the world I’ve ever dealt with.”

Rookie defender getting the start? It’s looking like a great possibility.

During the 2020 NFL Draft, the Cowboys drafted Alabama cornerback Trevon Diggs with their second-round selection, 51st overall. Then they picked Tulsa defensive back Reggie Robinson II in the fourth round.

While Robinson recently got some reps at safety, it’s been Diggs that has been wowing onlookers at training camp. Due to Jourdan Lewis suffering an ankle injury, the Cowboys’ second-round rookie has been benefiting from extra reps at training camp. And according to reports, Diggs is making the most of them.

That progress continued on Friday with DallasCowboys.com’s staff writers Rob Phillips and David Helman noting the following about Diggs’ excellent showing so far.

” … the Cowboys have given plenty of looks to rookie Trevon Diggs and he hasn’t disappointed. On Friday, he had another pass breakup in a team drill to get the defense off the field on third down. His long arms and long stride also keep him in position on deep routes, something he did again on Friday running with Jon’Vea Johnson down the field on a deep pass that fell incomplete.”

Everyone breathe, the offensive tackles are back to the rescue.

After participating in individual drills Thursday, starting offensive tackles Tyron Smith and La’el Collins worked into team drills for the first time together in camp. Collins’ first practice was Thursday, while Smith had sat out a few days with a little hamstring tightness. Swing tackle candidate Cameron Erving also continued to work into team drills.

Looked like a lighter work day for wide receivers Amari Cooper and CeeDee Lamb. Both took part in individual drills but didn’t have many team snaps as usual – perhaps a chance for the coaching staff to evaluate other receivers, and perhaps a chance to manage Cooper and Lamb’s workload with Sunday’s upcoming scrimmage to feature a heavier diet of team work.

Mike McCarthy and players speaks on the social injustice going on in the country.

“Sit down and actually get to know the community,” Collins said. “Let the people in those bad neighborhoods feel like they’re being protected and when the cops come around they don’t feel unsafe or bothered because those cops in their area came out and they tried to get to know us.”

Erving said proposals were floated to meet with local legislatures, mayors and politicians to spur action “implementing things that will help people of color.” He believes changing the perceptions and behaviors of adults is difficult.

Cowboys Night will be shown live on television to fans locally on TXA 21 as well as across the 25-station Dallas Cowboys Television Network throughout the southwest. The action will also be streamed live on DallasCowboys.com, Cowboys Mobile, Cowboys Now (Connected TV) & Cowboys Social Channels and in Spanish on NXTX – TELEXITOS 39.2. It will also be broadcast live on the radio on 105.3 The Fan, the club’s flagship station and official home of the Dallas Cowboys.

Cowboys Night will be fans’ first glimpse at the makings of the 2020 Dallas Cowboys team before the club makes its cutdown to the final roster. An in-depth breakdown of player and team drills will be highlighted and discussed with feature commentary by hosts and former Cowboys Michael Irvin and Nate Newton, as well as Bill Jones. Additional commentary and breakdown of the practice will be provided by DallasCowboys.com talent along with interviews from Jerry Jones, Stephen Jones, Mike McCarthy, CeeDee Lamb, Dak Prescott plus other players as they get ready for the 2020 season.

A lot has happened in these last few weeks of training camp. With the 2020 cut day looming on September 5th, it seems a good time to take stock of the Dallas Cowboys and update our 53-man roster projection.

Since our last projection we’ve seen a big name defensive lineman signed in free agency and then another injured and released. And if the usual rise and fall of players’ stocks wasn’t enough, we’ve also had the unique issue of opt-outs impacting the final makeup of the roster in 2020.

You can reference my pre-camp projections here to see how things have changed over the last five weeks:

There’s still a week to go before Dallas has to make their decisions and cut the official roster down to 53 players. From performance swings to injuries to COVID-19 testing, who knows what other surprises may come between now and next Saturday?

For now, we’ll take the current information as of today and build a Cowboys team for the 2020 season.