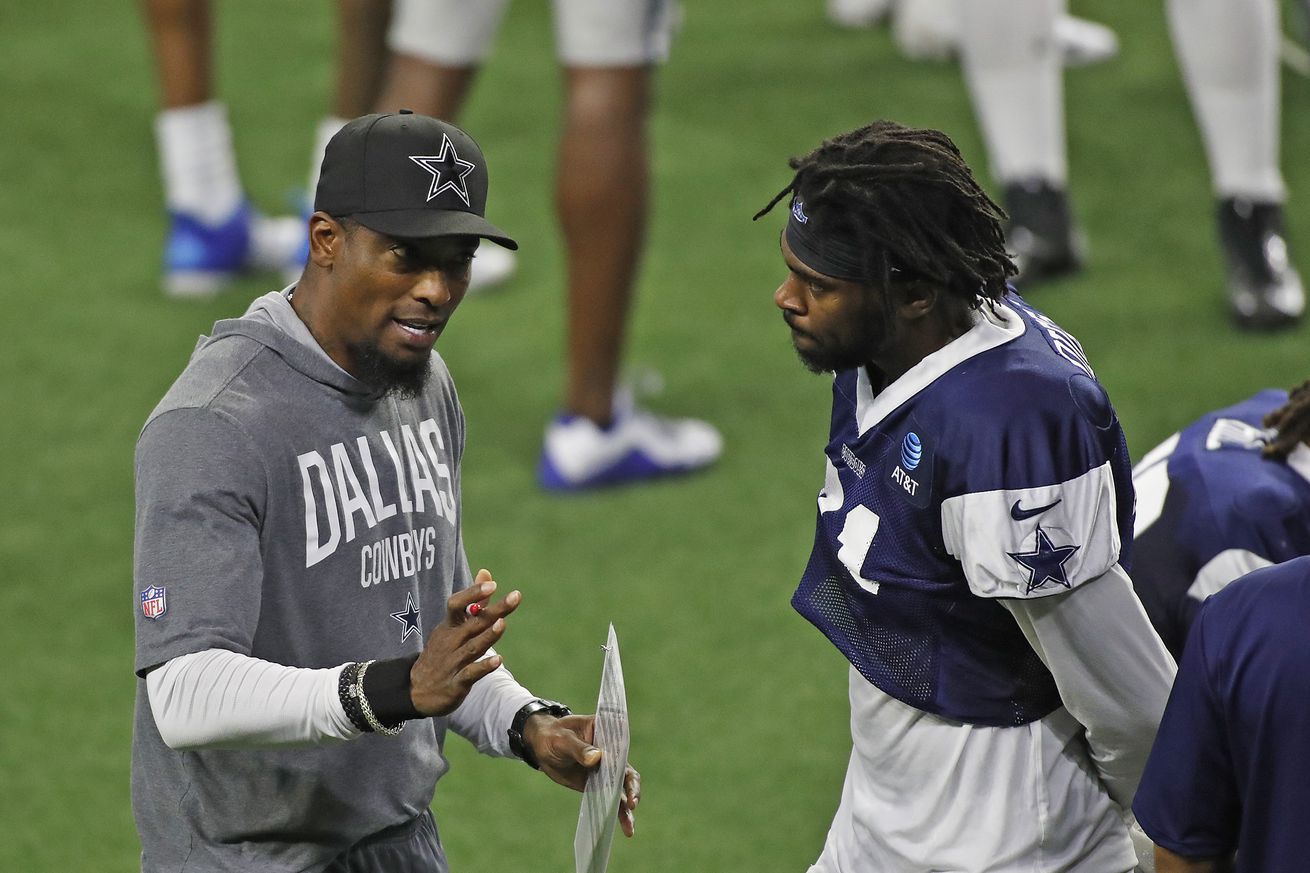 Here is your Sunday edition of Cowboys news…

Jerry Jones: I Want Cowboys To Be Part Of Change – Staff, Dallas Cowboys

The Cowboys owner spoke to 105.4 The Fan and issued a statement regarding recent events that have have been in the forefront of not only the sports world, but our entire country.

“I really want to say how our hearts as an organization, individuals in the organization, how our hearts go out to the individuals and the family members who have been affected by these times, these disheartening times that we’ve all seen on television,” Jones said. “And I want our team to be a part of change. The dramatic change isn’t going to happen overnight, but I want our organization and our players to play a part in the movement of making this a better place in this country. I feel confident that our players have a can-do and what-can-I-do participation in it. I want what the Cowboys to help make this a better place.”

While Jones is one person, others have shared thoughts like free agent tackle Cam Erving.

Speaking to reporters, it is evident that Erving feels strongly about the subject. And given that he was gracious enough to share some of his own experiences, it’s easy to understand why.

“I grew up in South Georgia, so I’ve experienced racism first-hand from the time I could walk. I didn’t necessarily know what it was, but I felt it,” Erving said. “I grew up and I got older, I saw it in different ways. I’ve been called the N-word within the last year and a half, two years – and it’s 2020, 2018, whatever. So it’s just something that’s in me, honestly.”

‘A three-headed monster’: The Cowboys have a new era of triplets bonded by a desire to be great – Michael Gehlken, Dallas Morning News

This new trio is hitting it off nicely.

Each player is different, but an unselfish desire to be great unites them. They share a goal to help Dallas become the sixth offense in NFL history to produce three 1,000-yard receivers in the same season. Cooper and Gallup totaled 1,189 and 1,107 receiving yards in 2019, respectively.

“When we drafted (Lamb), I’m thinking already Amari going over 1,000 yards,” Gallup said. “I went over 1,000 yards. And then you pick up one of the best wide receivers in the draft coming out. That’s a three-headed monster.

“Everybody up top did a good job drafting this year. CeeDee, he’s a good dude. He’s smart. He’s quick. He’s ready to learn. He’s a funny guy. He’s a good person to have in the locker room. So, great pick.”

A strong camp has a certain someone climbing up the fantasy draft rankings.

Who’s one player you’re re-evaluating before your final rankings come out?

One player whose projection I’m going to take a very close look at is rookie Dallas Cowboys wide receiver CeeDee Lamb. By all accounts, he’s having a phenomenal camp and is picking things up way quicker than any rookie should be expected too. Given how potent that passing offense can be, I have to see if my original 75-target projection is selling him short. He’s my WR65 right now, and I imagine he’ll jump up significantly. How far will depend on my new target projection.

Why Blake Jarwin will be the Dallas Cowboys’ best surprise – Lucas Mascherin, The Landry Hat

And it’s not just the receivers who will turn heads this season.

There’s a ton of noise about the Dallas Cowboys wideouts, but what about Blake Jarwin?

Anywhere you look, there is either an article or a video about the Dallas Cowboys‘ wide receivers. I’m not saying they don’t deserve that amount of attention, but often left out of the conversation is their tight end, Blake Jarwin. With lethal threats at the other offensive positions, Jarwin will emerge as the Cowboys’ best surprise.

Cowboys fans know who Jarwin is, but they may not think he’s as good as he is. I can’t blame them since he has been sitting in the passenger seat next to the future Hall of Famer, Jason Witten. When you watch him on tape or even look at his numbers, you should get excited. The former wide receiver has good speed for a tight end, runs routes like a wide receiver, and can catch like one too. While he may need some work as a blocker, it is his job as a receiver that will torture defenses.

Over the past two seasons, he caught 58 passes for 672 yards and three touchdowns. The undrafted free agent also caught 75.3 percent of passes thrown his way and averages 11.6 yards per reception. Those aren’t top-notch numbers, but they are good for a young backup tight end.

And don’t forget about that other tight end on the roster.

Dalton came to Dallas with a similar scouting report to Jason Witten’s rookie year. While nobody expects him to ever develop into a legend, Schultz does have a balanced game with both receiving and blocking ability.

Blake Bell is primarily a blocker. It was enough to get him on the field for almost 38% of the Chiefs’ offensive snaps last year, but also limited him to just 15 targets in the passing game. Given Bell’s more limited skill set, these strong showings as a receiver in camp are big for Dalton Schultz. As long as he’s competent as a blocker, he allows for more options in play-calling and more ways to confuse a defense.

Schultz still has two years left on his rookie deal, adding to Dallas’ incentive to make him a bigger part of the offense. They could go into the next two seasons having the top two spots on the TE depth chart figured out.

While LC is now a savvy veteran, it’s easy to forget that last season was just his third season at right tackle. He took a big step, and that bodes well for good things to come in the future.

Almost exactly a year ago, the Cowboys signed Collins to a five-year, $50 million extension. Now in his sixth season, Collins believes his best football is ahead of him.

“I feel like last year was just the scratch of it, just the beginning, to be honest,” he said. “This is my third year ever playing right tackle. I’ve been playing football my whole life, but my third year playing right tackle. I’m left-handed and everything on the left came natural. So switching over I really had to get in tune with technique and really understand footwork and where my body needs to be and stuff like that. “I think as I continue to get more and more reps over the years, I feel like that’s what kind popped out last year and I’m just going to build off of that.”

Dallas Cowboys: 5 players whose stock is on the rise – Reid Hanson, SportsDay

Which players have been impressing the most as of late? Here are five players making a difference.

Diggs is playing with a nose for the ball, turning and tracking, and even <gasp> intercepting. He’s playing with his hands, feet, and overall length to keep his physical advantage on routes. And he’s playing with calm and maturity by not falling victim to double moves like so many rookies (and even veterans) do. Trevon Digg’s stock on Day 1 of camp is vastly different than it is today. Diggs looks like he’s going to be starter sooner, rather than later and that has more to do with how he’s playing than it is an indictment on the veteran he’s competing with.

More camp standouts, including an UDFA who might work his way onto the roster.

The Cowboys are stacked at linebacker with two of the best young players in the game already occupying roles there. Jaylon Smith and Leighton Vander Esch are the unquestioned starters and they helped make this defense a feared unit in 2018 when they were both on top of their games.

As for the third starter, there’s Sean Lee who returned on a one-year deal. Lee has always been one of the best in the game but injuries have slowed him down. However, he’s coming off his first-ever 16-game season and recorded 86 tackles and a pick in the process. None of those three will be moved and Joe Thomas is set as one of the primary backups. For Bernard, he can find a way to become the fifth guy as long as he continues to play the way he has during camp.

How the 2020 NFL schedule rotation presents Dallas with a very stiff challenge – Bob Sturm, The Athletic

The writers over at the Athletic do the leg work and rank the toughest divisions in the league, and things aren’t so lucky for our Cowboys.

The general feeling is the Cowboys and Eagles are getting a tremendous break by not having to play in a tougher division, as we assume that Washington and New York would be delighted to finish with eight wins. They are just as likely to pick in the top five next year as almost anyone. But that general feeling is probably wrong because they give it all back by having to play against the two toughest divisions in the entire league in 2020.

The AFC North is going to be fantastic if Cleveland rebounds and the NFC West is the best division in the league. Wow. That will not be easy, as there are no cupcakes in either division at this moment aside from the young Bengals.