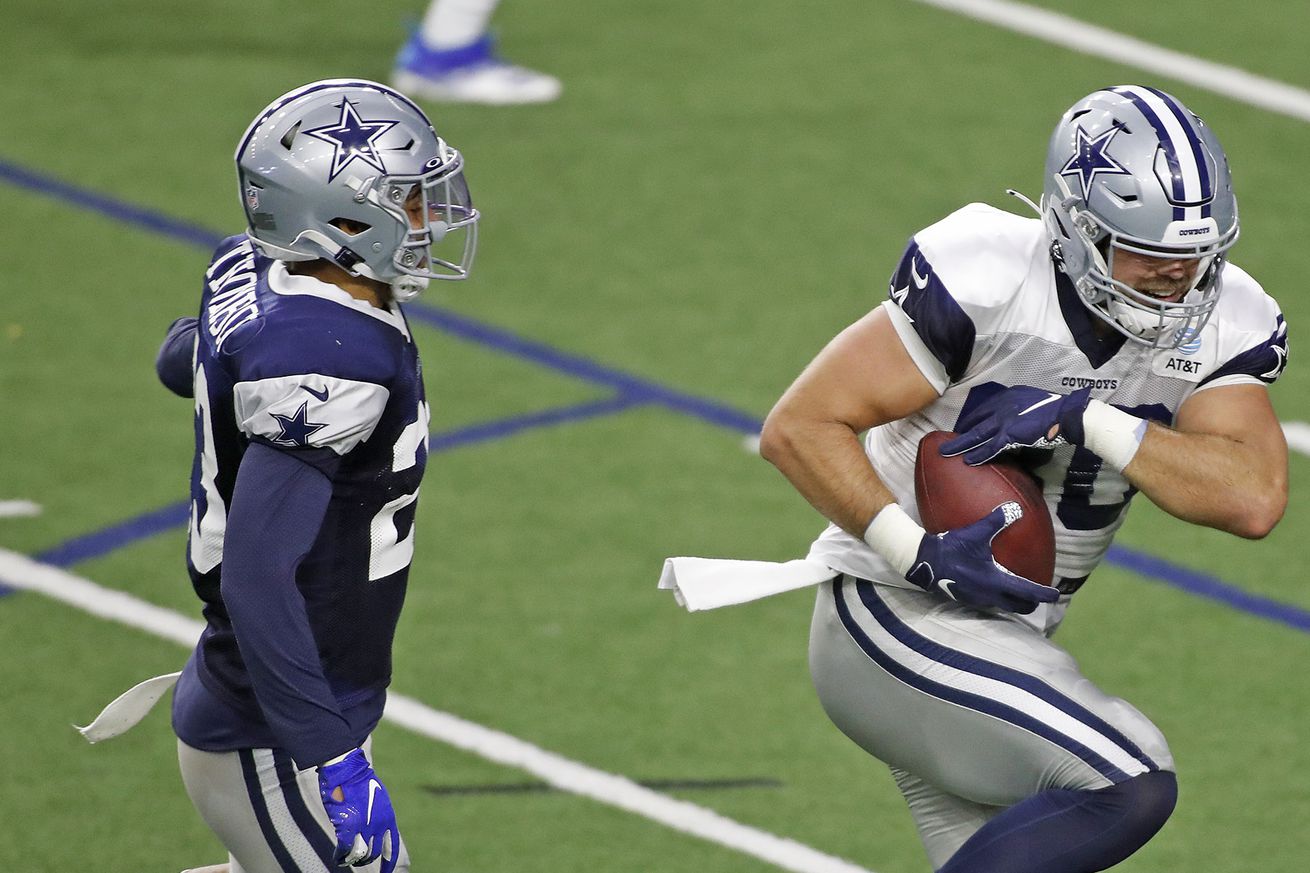 Here is your Tuesday edition of Cowboys news…

Man, Mike McCarthy isn’t taking any chances when it comes to opponent’s scouting his team.

“We talked about it this past week and frankly, this is such a unique season on so many fronts,” he said. “I can’t tell you the number of conversations you have about competitive advantage and disadvantage, and frankly with the fact that we were televising the practice here tonight, we would be exposing our younger players to an evaluation process that the other teams really are not exposing their team to. That was the reason behind going with the white and blue shirts this evening.”

There was some news and interesting points to come out of the “scrimmage” so let’s take a look.

Wide receiver Ventell Bryant was injured during the proceedings, but at least he didn’t suffer an ACL tear. It’s still unknown just how long he will be out.

Xavier Woods also came up lame, but it looks like it’s not serious.

The starting safety appeared to injure his groin during the Cowboys Night practice at the stadium. Woods limped straight off the field and to the locker room. He later returned to the sideline in street clothes.

When asked about both Ventell Bryant and Woods, head coach Mike McCarthy didn’t seem overly concerned about either injury.

Here’s some more information on the “scrimmage” that happened Sunday.

Standout No. 2: CeeDee Lamb – CeeDee Lamb has looked like the most talented player on the Dallas Cowboys since Day 1. Not just of the WRs but of the entire team. Granted, receiver is the easiest position in which to “flash”, but still, Lamb looks like a generational athlete who is going to make half of the league regret passing on him in the draft.

Standout No. 3: Aldon Smith – with the terribleness at tackle, it’s hard to fairly evaluate any edge rusher. Both starters have been out and even the backups have been MIA on most snaps. But from what we’ve seen from Aldon Smith, it looks like he’s for real. Smith logged two sacks on Sunday, keeping pace with DeMarcus Lawrence (who also appeared to snag two sacks). If you can perform as good as D-Law, then you’re doing good.

Standout No. 4: Amari Cooper’s Mutton Chops – Amari Cooper didn’t do much on the field but his big beautiful sideburns sure made some noise. His version of COVID-Beard is a sight to behold and hopefully carries into the regular season.

Bradlee Anae is Making Noise in Training Camp – Matthew Lenix, Inside The Star

If you’re looking for a player that may have a chance to make an impact, look no further than Bradlee Anae.

What’s unique about Anae is not only can get after the quarterback in a 4-3 but he can stand up and play outside linebacker in a 3-4. New Defensive Coordinator Mike Nolan scheme fits his skill set perfectly as it’ll focus on three and four-man fronts to keep opposing offenses off-balance. Also, it will feature a designated pass rusher position which could be a spot where Nolan uses Anae in certain situations.

After losing Robert Quinn and his 11.5 sacks from 2019 the Cowboys have added some premium talent at defensive end with Aldon Smith and Everson Griffen (and hopefully a reinstated Randy Gregory) to complement DeMarcus Lawrence. If Anae continues to progress he could very well be making plays on Sundays as a part of an extremely formidable Cowboys pass rush in 2020.

Well I bet everyone is happy that they chose CeeDee Lamb.

“We were sitting there in that draft and boy there our end, our defensive end, fell to us from LSU,” said Jones, according to Jon Machota of The Athletic via The Spun. “And we were so giddy, but there sat CeeDee Lamb. And I’ll never forget, my grandson Shy reached over and punched me. I was sitting on the couch and he said, ‘Production, Papa. Production. Look at his production! Look at his production!’

“Now my other grandson had told me when they played LSU at Arkansas, everything they did they had to game plan around that pass rush. So you say well what is this, listening to grandsons? Well and I looked up there just reminded me that that last name was Lamb.

“We had had it all for the right reasons. He’s just a unique, unique football player. Unique talent. And boy it all fell together and, it just really was almost like an omen. He was certainly one of the best friends I’ve ever had. He lived vicariously every breath that I’ve got to be involved as a Cowboy. And Jerry Lamb was an outstanding, great player and great leader.”

Of course, the defensive end Jones referenced is almost certainly former LSU Tiger K’Lavon Chaisson, who went No. 20 overall to the Jacksonville Jaguars. Dallas could have used help on defense a bit more than offense, but Lamb was pegged as a potential top-10 pick before the draft and was too good to pass up on in the late teens.

The Cowboys are going to need all the help they can get at the safety position.

Apparently, he’s continued to show his reliability in training camp and has even played a number of snaps with the first string. McCarthy came into camp much more familiar with Clinton-Dix, but he’s been impressed with Thompson. “He definitely has lived up to his reputation,” McCarthy said of Thompson. “His work ethic, his workload capacity is outstanding. He’s having a great camp.”

Thompson was resistant to forecast who will start when he spoke to the media on Thursday, but he did suggest the players knew a spot was up for grabs. “It’s a great competition,” Thompson said. “We have a room full of ball players who take this job very seriously. It’s exciting.”

After emerging as an exciting young starter for the Giants, Thompson admitted that it’s been a “rough journey” that included foot surgery before joining a Cowboys team with starters they already trusted. Still, since coming to Dallas Thompson has managed to find himself on the field during games or important practice moments consistently. “Experience is huge,” he said. “Just being able to get out there and get some reps with those guys in a game-like situation has been awesome. I’m continuing to look at the film and critique myself and be my hardest critic.”

Good news for a receiver fighting to make the roster right now.

It seems like Cedrick Wilson has cemented himself as the solid WR4 of the bunch, but there is still at least one more spot to be had. One of the contenders for said spot, Ventell Bryant, went down with an apparent injury during Cowboys Night, but thankfully word is out that it wasn’t worst-case scenario.

As the Cowboys were holding their scrimmage, Ventell Bryant went down. There was speculation that this could have been an injury of a serious variety, but on Monday morning NFL Network’s Jane Slater reported that the MRI showed no ACL tear for the wide receiver.

This is certainly good news as an ACL tear would be devastating for any player, let alone one that is in a fight for a roster spot. Whether the team’s WR5 is ultimately Bryant, Noah Brown, or Devin Smith remains to be seen, but thankfully Bryant doesn’t have a serious tear.

Everyone is hoping Xavier Woods is okay. .

At this point, it’s not considered serious, but will likely have him sitting out practices this week. This will create opportunities for Darian Thompson, Ha Ha Clinton-Dix, and Donovan Wilson to continue battling it out for safety snaps. Reggie Robinson, who was moved to safety last week, will also compete for snaps at the position as Woods sits. Daryl Worley, who played some safety for the Oakland Raiders in 2019 could possibly see some snaps while Woods is out.

With Chidobe Awuzie and Jourdan Lewis already dealing with injuries that kept them out of Cowboys Night, the secondary is down to Anthony Brown as the only returning starter from the 2019 group. Though there are a lot of options for the Cowboys in the secondary, it’s a bit more concerning that they’re currently down three starters.

The Cowboys did a lot of work this offseason to solidify the depth in their secondary, re-signing Anthony Brown and CJ Goodwin. They then signed Ha Ha Clinton-Dix, Daryl Worley, and Saivion Smith. They drafted Trevon Diggs and Reggie Robinson II. That’s seven players they’ve added to their secondary since the end of last season.

With Xavier Woods out, that depth is going to be tested this week. Woods has started 29 games for the Dallas Cowboys over the last two years and has recorded two interceptions in each of those seasons. There’s a lot of optimism that Woods can take another step forward in his development this year. Even as questions linger about the other safety spot, the stability Woods brings to the back end of the defense will be missed this week. Hopefully, when the Dallas Cowboys begin their preparations for the Los Angeles Rams in week one, Woods will be ready to go.