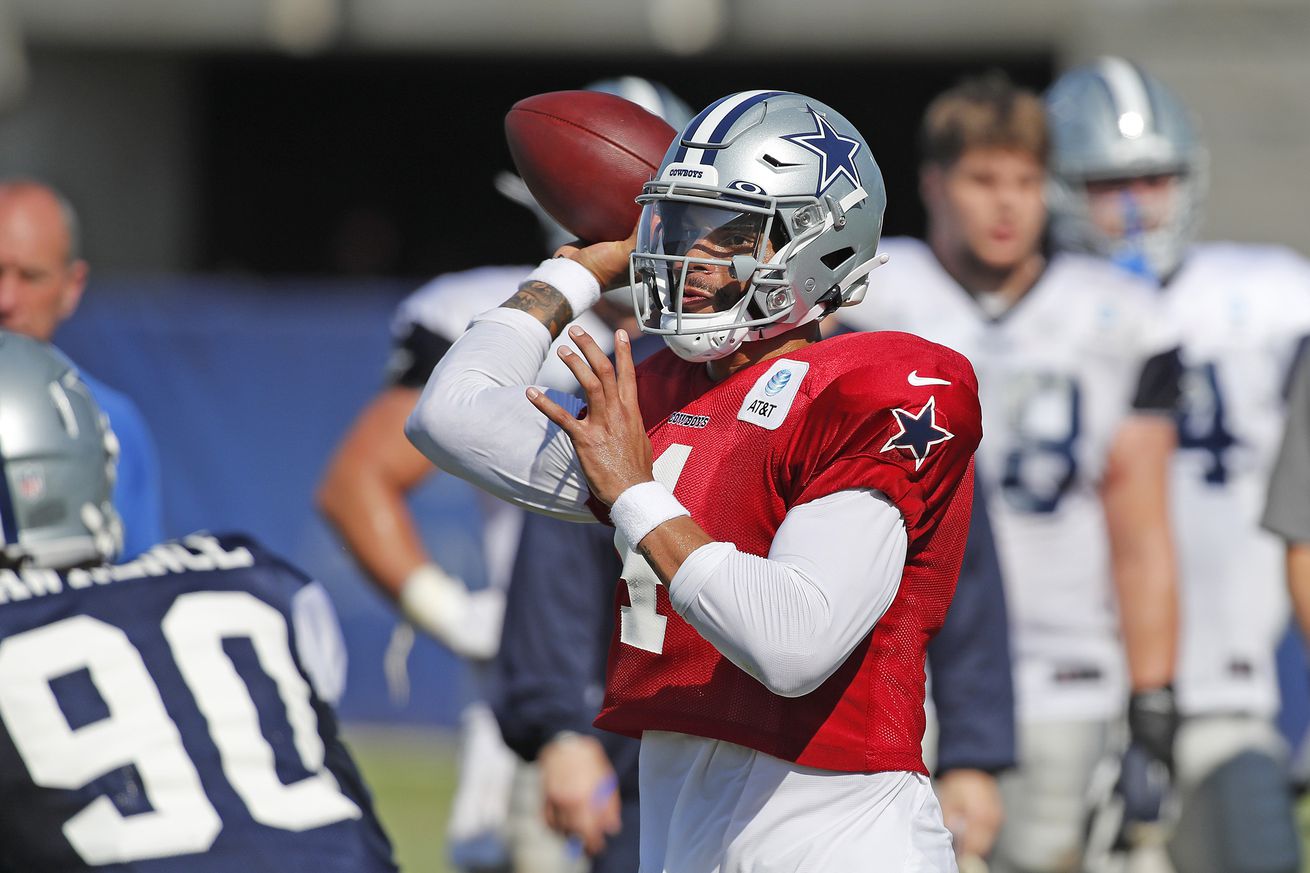 The Cowboys roster definitely gets some love from the media.

Before we even begin, we must caveat this with the simple fact that preseason rankings are just projections, and often have more to do with what happened the last couple of seasons than what is coming this year. But we still eat these things up. That is especially true when they put your favorite team in a good light. For fans of the Dallas Cowboys, the forecast of the top 100 NFL players from ESPN does just that. Six of their players land on this list. Here are the selections:

It’s worth noting that he wasn’t even ranked on last year’s edition of this list. Only reigning MVP Lamar Jackson of the Baltimore Ravens and the San Francisco 49ers’ Nick Bosa came in higher after not making the cut in 2019.

What they are saying: ”Dak’s so good at commanding a room, commanding a huddle, getting guys on the same page. Obviously we’re taking the time to build a chemistry as a football team. It’s different every year, but it is nice having some familiarity at that position and someone who is such a great leader and role model for everyone on the offense and the whole team.” — Zack Martin, Cowboys guard

The Carolina Panthers’ Christian McCaffrey and Saquon Barkley of the New York Giants made the list ahead of Elliott, but this still shows he is considered one of the elite backs in the league.

When he has played a full season, Elliott has rushed for at least 1,357 yards. Is he the same back he was as a rookie? He had just four carries of 20 yards or more in 2019, the fewest among the league’s top 10 rushers. But the Cowboys firmly believe he is still a difference-maker and can become their closer under Mike McCarthy. — Todd Archer

The projection of Martin as the best offensive lineman for the Cowboys squares with what most who follow the team see. In this list, he is not, however, seen as the best guard in the NFL. He is second to the Indianapolis Colts’ Quenton Nelson – who just edges him out at 44.

Signature stat: Martin’s pass block win rate of 95.6% when lined up at guard ranked fifth among those players last season. Martin allowed first pressure on a play that ended in a sack one time in 405 pass-blocking plays all season (ESPN/NFL Next Gen Stats).

He fell from his place on this ranking from last year – but just two spots. If consistency is something you want from your best wide receiver, that’s a good sign.

What they are saying: ”He’s such a smart route runner and I think he’s got a plan in his head on every single route that he’s running. So he knows how to attack leverage, he knows how to go after these corners and find the zones and different things. I think that’s what makes him special.” — Andy Dalton, Cowboys quarterback

He slides ten spots this year, but it really isn’t because of talent.

Health is a concern because Smith has missed three games in each of the past four seasons, but he is still one of the best left tackles in the game. He gave up just one sack and two hurries last season. When Smith arrived as a first-round pick in 2011, he said his goal was to make the Hall of Fame. If he can continue to protect Dak Prescott as well as he has, he could very well end up in Canton. One more Pro Bowl appearance would be his eighth, the most in team history. — Todd Archer

He’s the lone Dallas defender to make the grade, which is not surprising given the issues they had on defense last year. And with the massive infusion of new talent plus an anticipated resurgence from Jaylon Smith and Leighton Vander Esch, there could be others deserving this kind of respect by season’s end.

Signature stat: Despite only five sacks, Lawrence posted a 25.8% pass rush win rate in 2019, good for fourth best in the NFL, per ESPN metrics from NFL Next Gen Stats. Lawrence is one of just three players to rank in the top 15 in pass rush win rate each of the past three seasons (Aaron Donald, Robert Quinn).

That’s a good representation for the Cowboys, and it is worth noting that all of them are in the top two-thirds of the league. The group also bears out that the offense is the strength of Dallas.

Now for the bad news: With this kind of representation, the Cowboys have no excuses for not getting back into the playoffs, even without the roster additions that should improve the overall talent level.

Perhaps high expectations aren’t really bad news. If you live up to them, of course.