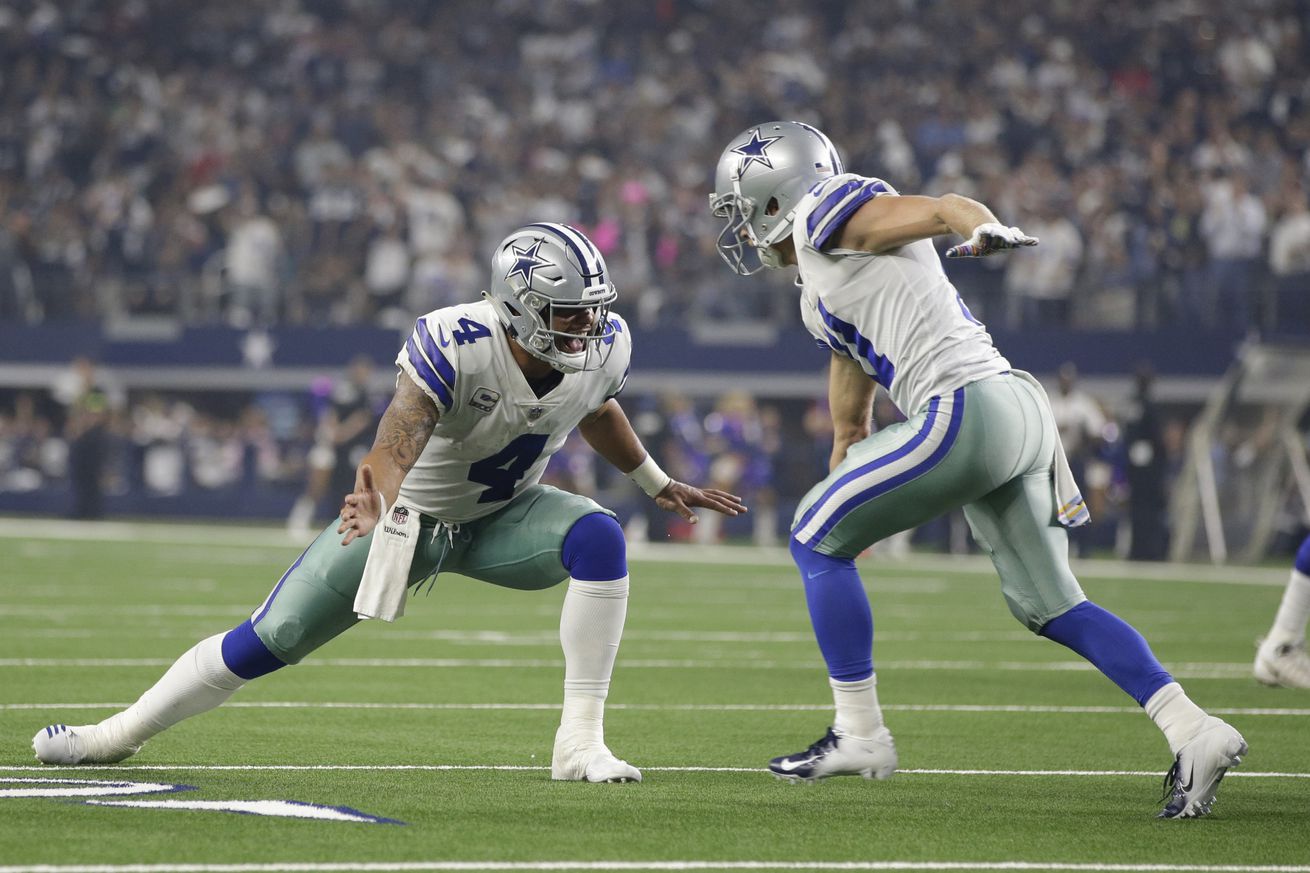 This week, we just couldn’t give the Cowboys game ball to one player.

After the Dallas Cowboys took out their frustrations on the Jacksonville Jaguars in a 40-7 woodshedding, there were plenty of heroes. That’s makes this week’s edition of the Cowboys Game Ball particularly tough. After careful consideration, we narrowed it down to two players, but that’s as far as we could go. So we’re splitting the game ball in half and handing them out that way.

This week’s recipients are Dak Prescott and Cole Beasley.

Before we talk about them, let’s talk about some other people who should get honorable mention consideration.

The offensive line. This was one of their better performances as they did a good job of winning in the trenches against a stout Jacksonville front seven that has given teams problems all season. They weren’t perfect, they gave up three sacks and Prescott was flushed out of the pocket on occasion, but in general they provided time to make plays and got Ezekiel Elliott to 100 yards rushing. That’s fine work.

Another player worth mentioning is the aforementioned Elliott, who produced 106 yards on the ground and scored a touchdown. He had to grind it out at times, but he ran tough and kept the Cowboys offense in balance.

On defense, Jaylon Smith and Leighton Vander Esch were tackling machines once again. Randy Gregory finally made an impact with a sack, a couple of tackles for loss and three hits on the quarterback. Byron Jones was out there doing his Byron Jones’ thing, which is shutting down receivers. Jeff Heath and Jourdan Lewis pitched in with turnovers.

A special shoutout to Brett Maher, who was pure money on his field goals, four for four with two of the 50-yards-or-over variety.

Definitely a lot of great contributions. Still, we’re going back to Dak and Bease as the guys who were the main catalysts of the 40-7 beatdown.

Prescott’s numbers volume numbers, at least in the passing game, weren’t mind-blowing. He only threw for 183 yards, not even over the 200 yards that is often set as the barrier. But it was his efficiency on the evening, along with throwing two touchdowns, that was key in the passing game. He ended up with a 107.5 rating. In the end though, it was his legs that really made a difference. Running for 82 yards and a touchdown while keeping the Jaguars defense off balance, and bailing out his offensive line when they did make mistakes, was an essential part of his performance. When you wrap it all up, it was exactly what Dallas needed against the number one rated defense in football.

His partner in crime was Cole Beasley. He’s been telling everyone that he’s been open all year, and he was again tonight. Beasley had nine catches on 11 targets for 101 yards and two touchdowns. He had more catches than the rest of the team combined. The Jags just couldn’t get him covered as he converted plays into first downs and touchdowns. It was a dominating performance.

All phases of the Cowboys team were firing on all cylinders. It was easily the Cowboys best performance of the year and came at a very crucial time. With the team back at 3-3, they face a game against division-leaders Washington next week on the road. If the Cowboys can get that win, they might be on a roll. They’ll be looking to Dak Prescott and Cole Beasley to help lead the way.