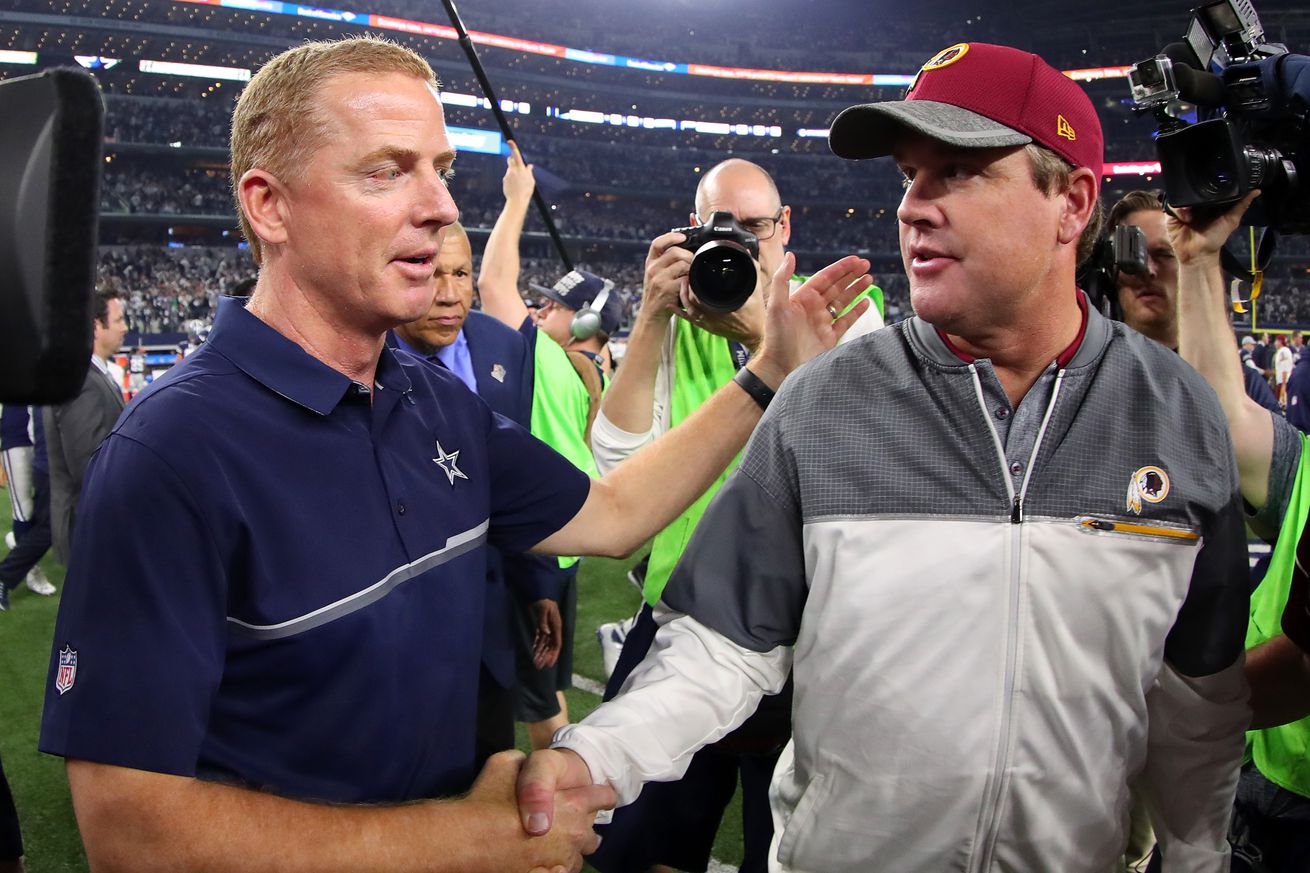 Who will win the most compelling game of the week?

Experts share their picks for the Cowboys Week 7 game in Washington.

The NFC East is shaping up as a three-team race, and Sunday’s Cowboys-Redskins matchup will put one of those clubs in first place. The Eagles could take a share of the lead if they beat Carolina and Dallas wins.

Our group of NFL experts foresees that as a likely scenario, with all five picking Philadelphia, and three predicting America’s Team to win in the Nation’s Capital. If you’re looking for a trend, though, good luck. Washington and Dallas are the only teams in the league that have alternated wins and losses throughout this season, though one of them will string together victories for the first time in Week 7.

The road has been unkind to the Cowboys this season, as they are averaging just 12.3 points, 276 yards and 16 first downs in their three losses away from home. That might be a poor forecast for Sunday’s game at Washington, but the Cowboys have found FedEx Field a friendly place as of late. The Cowboys have won five games in a row in Landover, Maryland. In those five victories, the Cowboys have averaged 29.4 points. They won’t score that many this time, but they will improve to 2-0 in the NFC East this season.

This looked like a stinker a few weeks ago, but now it’s one of the more interesting games. Each team has alternated wins and losses each week. Dallas breaks the trend and wins two in a row.

Perhaps the most compelling game of the week, if only to discover what these teams are. Will we see Dak Prescott take off more, forcing the Redskins to adjust and shortchanging that Ryan Kerrigan-fueled pass rush? Can the Cowboys stifle what has mostly been a lackluster Redskins offense? Where is the Alex Smith from 2017? You know — the guy who eschewed his career narrative by suddenly throwing deep more successfully than any QB in the NFL. Last week, he failed to average even 5 yards per throw. Unless Adrian Peterson really softens up that Dallas front, the Cowboys’ defense rules the day.

Both teams are inconsistent, and both teams are due to lose. It’s ultimately a toss-up, and in a year of high-powered offense, it should be a tough, hard-nosed, low-scoring game.

The Cowboys are 3-0 at home and 0-3 on the road. Dak Prescott is a different guy at home. That will show up here. The Redskins have had one bad day on defense – that coming against the Saints – but I think they shut down the Dallas offense. Redskins take it.

It’s one of the legendary rivalries in the NFL, there’s something at stake for once (the NFC East lead), it’s back on CBS like in the old days … and its anyone’s guess how either team plays.

Can the Cowboys team that humiliated the Jaguars at home last week be trusted? How about the Washington team that jumped all over the Panthers and then made a defensive stand at the end? Is anyone dying to see a coaching matchup of Jason Garrett and Jay Gruden?

Dallas has won five in a row at Washington and eight of past 10 overall in this rivalry, while Skins are on a 1-7 skid following a victory. Sometimes, though, the trend must end. Cowboys are appreciably worse on the road (0-3, 12-point average), so I hunch homies defending the turf for a pleasant change.

Washington has been an impossible team to pick this season, but I like them to win here and stay in first place in the NFC East.

The Cowboys defensively are one of the best in the league when it comes to three-and-outs. A big reason for that is their ability to limit yardage on first down. The Redskins are going to try to establish the run early with Adrian Peterson to get to their play-action game with Jordan Reed and Vernon Davis. The Redskins are really banged up at receiver, so how well they can hold up against the run and handle both Reed and Davis down the field will be the difference in the game. With Sean Lee back in the lineup, look for this defense to continue to build on their outstanding start. The Cowboys get their first road win behind an attacking defense.

Top-Tier Game: The Pittsburgh Steelers may have saved their season with a win last week. This week’s version of an early-season, make-or-break game is between the Cowboys (3-3) and the Redskins (3-2), two N.F.C. East teams that deserve to be taken seriously but have not provided the consistency of a contender.

The Redskins have faced a few teams with well-regarded running games, but have yet to face a true test against a team committed to grinding it out. Dallas will almost assuredly run Ezekiel Elliott right at Washington’s front seven to wear them down, and if the Cowboys continue that strategy long enough, it should create opportunities for Dak Prescott to throw downfield.

A road win against a division rival that gets them back over .500 could be exactly what the Cowboys need to shake off the malaise of the last two years. Pick: Cowboys