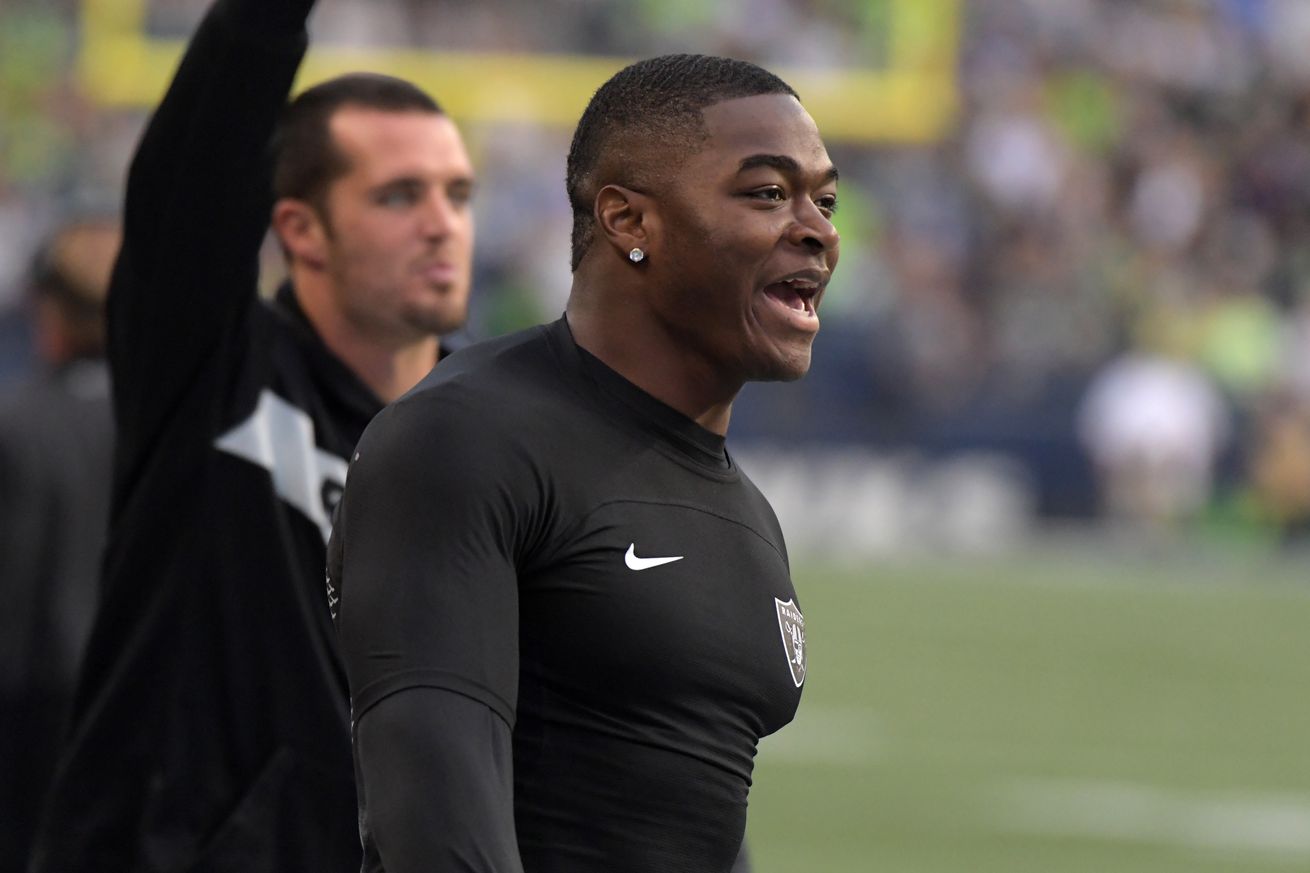 Cowboys new receiver is all the buzz around town, in the locker room, and coaching offices.

Early Impressions Of Amari Cooper: ‘He’s A Football Guy’- Rob Phillips, DallasCowboys.com
The Cowboys coaches have only had two short practices but they are mightily impressed with new receiver Amari Cooper.

Wide receivers coach Sanjay Lal: “He’s an intense listener, so when you’re coaching him or watching film he’ll say, ‘Can you rewind that again? Why are you thinking this?’ There’s good conversation about why we’re doing what we’re doing and not just, ‘OK, I’ll do it.’ I like that part about him.”

Coaches impressed with Amari Cooper quickly picking up Cowboys’ offense -Jon Machota, SportsDay
Nothing has seemed to difficult for Cooper thus far as he integrates himself into the Cowboys offense.

“You can’t have enough playmakers on your team,” offensive coordinator Scott Linehan said while discussing Cooper on Thursday. “Feel like he’s a guy who can do some of the stuff you want to do on the outside part of the field and he’s been versatile in his career. He doesn’t play just one position. He can move around. He’s got a nice history of being a big-time playmaker.

”All the way from high school days, this guy has a knack of making the big play and I think he can add that to our offense.”

Cooper’s Impact On The Future? – David Helman, DallasCowboys.com
What do the Cowboys need from Cooper in order to boost this offense in the second-half of the season?

What I wanted to know is whether Garrett is right in his assertion that it’s hard to count on young wide receivers to produce. So I went back to 2010 and looked at every, single receiver that has been drafted into the NFL. I looked at their overall production and their early-career production.

A quick caveat before I dive in: this Dallas offense is a run-first, ball control offense. Even with a top-tier receiver in the huddle, it’s probably not realistic to expect the Cowboys to put up eye-popping passing stats. That’s just not their way.

So here’s what I did. I went back to 2016, when this offense operated efficiently with Dez Bryant on the outside. Bryant played 13 games and caught 50 balls for 796 yards and eight touchdowns that year. I decided to handicap those numbers for a full 16-game slate, and I came out with a final stat line of 62 catches for 980 yards and 10 touchdowns.

Amari Cooper Can Write New Narrative With Dallas Cowboys – Jean-Jacques Taylor, NBC 5 Dallas-Fort Worth
There was a false narrative that Cooper was traded because “he didn’t love football”, maybe he just didn’t love the Raiders.

“I mean the first thing you think about when you hear the Cowboys is that star, America’s Team, and all of that. It’s a great franchise.”

What could Cowboys be forfeiting in bet that Amari Cooper is worth a first-rounder? Let’s take a look -Kevin Sherrington, SportsDay
What are the Cowboys missing out on by not having a first-rounder next year? It depends on where they finish.

No matter what you think of the Cowboys, chances are pretty good they’ll end up at least .500, meaning they’d be picking 15th or so, at best. Of the previous eight drafts, the qualifiers under such a scenario are Frederick (31st), Martin (16th), Jones (27th), Charlton (28th) and Vander Esch (19th).

The question you have to ask is, does a 24-year-old wide receiver with two Pro Bowls fit in with that bunch, especially if he helps you win a weak NFC East?

Cole Beasley says Amari Cooper’s impact on Cowboys is ‘the roof with no ceiling’ – Clarence Hill, Fort Worth Star-Telegram
Count Cole Beasley as another excited party on board with the trade for Amari Cooper, it’s only going to make the offense better.

“I just know he has some juice,” Beasley said. “Off the line, getting off of press, he is really good, which is one of the hardest things about the NFL. So if you got that, it is really the roof. There is no ceiling.”

Beasley doesn’t know how much Cooper’s addition will impact his game because he’s already rolling. But he thinks it can only help, which is bad news for opposing defenses.

“I don’t know, we will find out. Hopefully, a lot,” Beasley said when asked if Cooper will open up more things in the middle of the field for him. “I have been all right without it so … If it’s any easier for me, the defense is going to be in trouble.”

Beasley said he believes Cooper’s presence will have a bigger impact opening things up for Ezekiel Elliott and the running game. He said they can’t load the box and will now have to respect the outside receivers.

Comparing all rumored receivers of interest, was Amari Cooper the right choice for Cowboys? – Michael Sisemore, Blogging The Boys
Does statistical evidence back up Cowboys trade for Cooper or were there better options?

Both Cooper and Watkins are on pace for over 80 targets and close to 60 receptions for around 750 yards give or take. What stands out about newly acquired Amari Cooper based on the above? Well, separation is very important at the position and the average separation for an NFL receiver is set at 2.77 yards. Before the signing, Cole Beasley was the best receiver with 2.5 yards of separation (98th in the league). Cooper is averaging 3.8 yards of separation (ninth-best), which was very much needed in the Cowboys passing game. After 2016, Matt Harmon of Next Gen, rated Cooper fourth in total separation behind Antonio Brown, Odell Beckham Jr., and Terrelle Pryor.

Could Patrick Peterson be traded to an NFC East Rival?- Peter Dawson- Fort Worth Star-Telegram
The Eagles made an offer to the Oakland Raiders for Cooper before Jerry Jones and the Dallas Cowboys landed the WR. Now the Eagles are interested in adding the All-Pro cornerback from Arizona.

The Philadelphia Eagles have been active on the NFL trade market.

And according to a report from Jason La Canfora of CBS Sports, the Eagles now want to acquire elite defensive back Patrick Peterson from the Cardinals.

Five changes the Cowboys need to make in the bye week – David Howman, Blogging The Boys
What can Dallas do to get back on track? Here are a few changes that they should consider during the bye week.

Change up some of the route combinations in the passing game

In the offseason, there was a lot of hype about the Cowboys’ new receivers coach, Sanjay Lal, and how his emphasis on fundamentals of route running would help this offense cater to Dak Prescott. We’ve definitely seen better route running from Beasley, who was already pretty good in that aspect, and Tavon Austin has shown significant improvement. Michael Gallup’s fairly quick development is also likely due to Lal’s presence.

However, the Cowboys are still calling their offense in a similar manner to last year. Many of the routes these receivers are asked to run are isolation routes that rely solely on the receiver’s ability to run themselves open. While this plays into the strengths of Beasley and now Cooper, the rest of this bunch simply aren’t good enough to do that yet.

The offense needs to use even more bunch formations for these receivers that utilize crossing patterns and rub routes to free up receivers at the line of scrimmage. This could provide open receivers quicker, which is necessary right now with how poor the pass protection has been.

But Smith, who declined to speak with the media the past two days, hasn’t played at the same level as past seasons at times. He’s been beat, most noticeably on the outside on several plays and he’s been flagged for four penalties, including three on the road. Dallas is tied for fourth in the league with 11 holding calls on the offensive line.

Pro football focus gives Smith a 73.8 ratings, which ranks as the 20th best offensive tackle in the league and a “good” designation. But not “high quality” or “elite,” the top two tiers in their rating system. You could argue he’s been good, but no longer one of the top left tackles in the league. In his first seven seasons (105 games), Smith has 52 penalties.