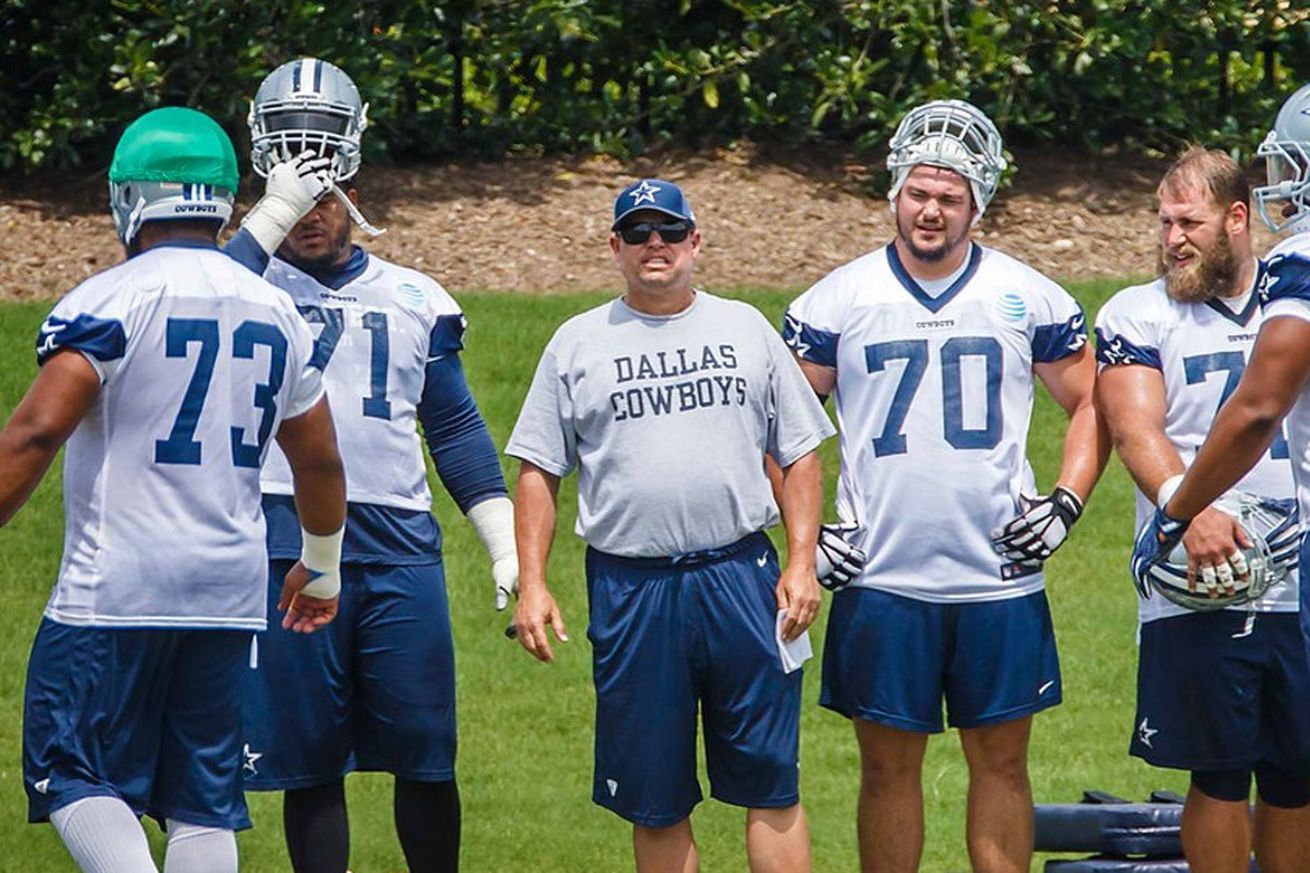 Has anyone done a worse coaching job than Paul Alexander this season?

What is happening to the Cowboys offensive line?

Who is this guy posing as Tyron Smith?

What in the world is up with La’el Collins’ footwork?

Why is Zack Martin pointing out a blitzing linebacker and failing to pick it up?

Somebody save Connor Williams from being flattened!

Can this line just not function without Travis Frederick?

These are common phrases uttered by anyone who has watched the Cowboys offensive line play football in this 2018 season. We’ve beaten up the players themselves for their hand in this but what about the offensive line coach, Paul Alexander? What role has he played in the turbulent performances by this offensive line? More importantly, should the Cowboys minimize his role going forward?

When Alexander was hired, he was one of four offensive position coach changes made with Gary Brown being the only holdover from 2017. Alexander had spent 25 years as the line coach for the Bengals. His last two seasons were his undoing as the Bengals surrendered the 11th-most sacks last season and 8th-most the year prior. This offseason, the Cowboys and Bengals basically swapped line coaches as Frank Pollack left Dallas and took that job immediately. Right now, it’s looking like the better coach walked out the door because the Cowboys line is very inconsistent from week to week.

In three home games, the Cowboys have only allowed six sacks total. In four away games, that number spikes to 17 sacks allowed. In comparison, the Bengals have made a turnaround in the sacks-allowed department going from 11th-most to 10th-least so far this season. The Cowboys gave up 22 sacks in the last eight weeks of last season and have given up 23 in the first seven games this year. Now, Dak Prescott has stepped into a hefty portion on his own with poor decisions and holding the ball too long. Still there is no denying the fact that this line just hasn’t found any consistency whatsoever. Could the hand techniques that Alexander has implemented have had adverse effects on these guys finishing their blocks?

Sacks aren’t the full story though because so many variables contribute to that, but can we talk about these drive-killing penalties? The communication in road games is just awful as we saw this past week with four penalties charged to the Cowboys offensive line. In 2017, the line was penalized only 24 times, drawing 1.5 flags per game. Through seven games, the Cowboys offense has accrued 20 penalties, 14 of which have been charged to the line. The worst offenders have been the two starting tackles. Smith averages seven per season, he’s already got four. Collins has eight which is two-times his average per season. Zack Martin and Joe Looney are the only two of the five to not get flagged yet. This line is on pace for 32 penalties, which would be the most since that awful 2015 season when they hit 37.

Last season, La’el Collins really found his groove at right tackle and took on some of the best pass rushers in the league. This season, Collins has regressed and his technique has been unreasonably poor in some games. Tyron Smith hasn’t been close to resembling that two-time All-Pro, and five-time Pro Bowl, left tackle that we’re accustomed to seeing. Travis Frederick’s absence is clearly a big blow but Joe Looney hasn’t been a liability, except maybe in identifying and communicating blocking schemes. Connor Williams is a rookie that lacks strength but that should be expected. What’s not expected is their better players struggling like this. Zack Martin is the only guy that will likely receive Pro Bowl or All-Pro consideration and even that may be a stretch.

What we’ve witnessed is an offensive line with plenty of talent deteriorate at an alarming pace. Now, are we to believe that it’s just the end of the road for Tyron Smith, who’s only 27-years old? Sure, he’s had nagging injuries in the past but he’s apparently not dealing with any health issues at the moment. What’s caused La’el Collins, a guy who was praised for technique last season to fall off the cliff this year? Like many areas on offense, what is causing this unit to seesaw from week to week?

This is the one component of this team where the Cowboys have to be able to hang their hats. Great offensive line play is the foundation of this team, there are so many spent resources in that area. Even with a rookie left guard and journeyman center, at-worst this line should still be above average. Right now, they can’t be trusted and that’s an indictment on their line coach because his group has more established talent than any position on the roster. Even with a big missing link, this line has more talent than most in the league. It’s clear that the offensive line hasn’t gelled and just seem uncomfortable playing Alexander’s style of technique. It’s imperative that they improve as quick as possible. That means they need to go with what they know works for them and Paul Alexander doesn’t seem to fit that picture.