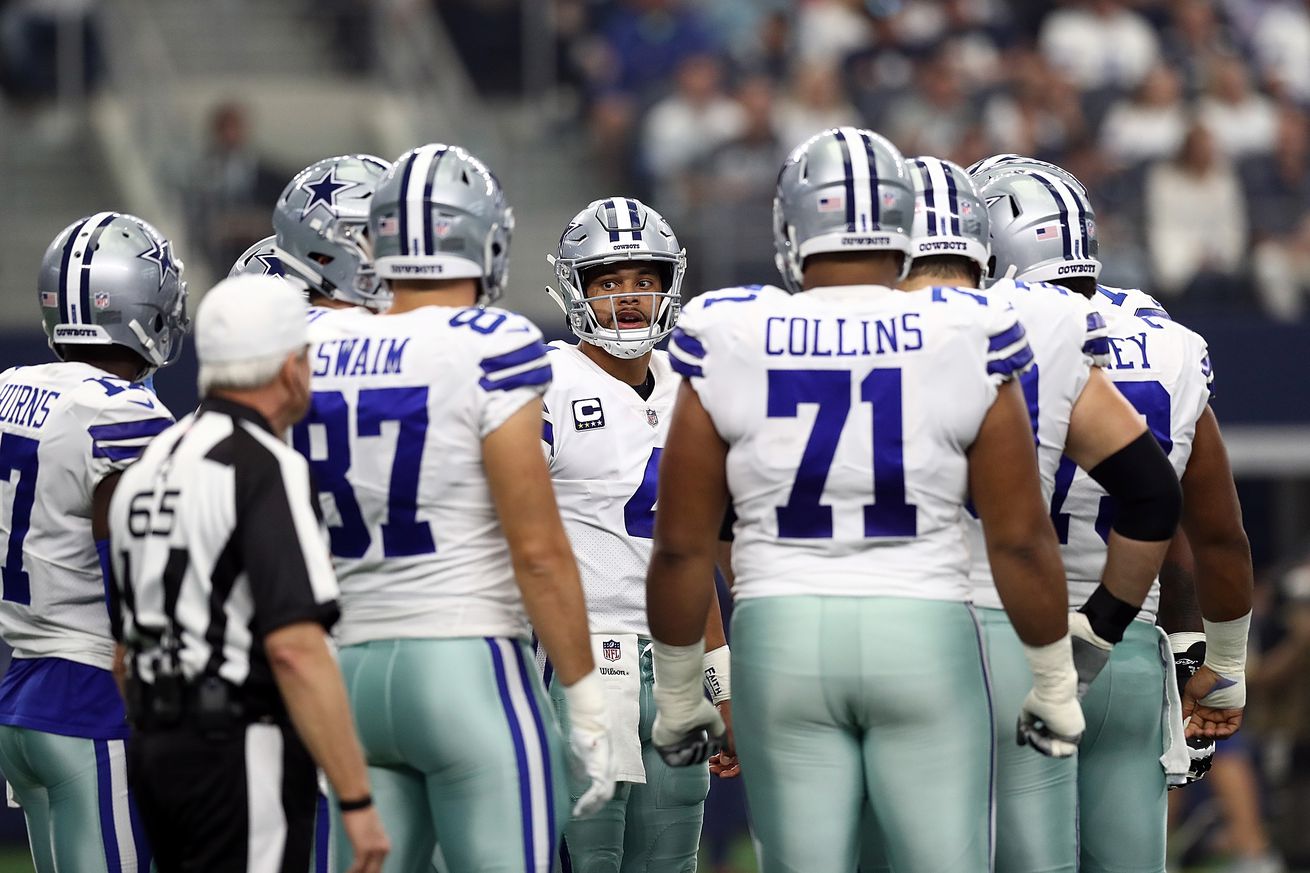 A look at two narratives about Dak Prescott and whether we should actually believe them.

Daniel Houston, who goes by @CowboysStats on Twitter, is a great source of analytics for all things Cowboys. One of the reasons he’s such a good source is he tends to analyze whatever data he’s looking at and then draws conclusions from his analysis.

This may sound like the logical thing to do, but I assure you, it is not. In today’s media environment of hot takes, black/white thinking, and clickrates, many folks form an opinion and then go looking for data to support that opinion.

Which may be what prompted Houston to write this recent comment.

People RT stuff that appears to confirm their prior assumptions. A single play that may not be representative ends up going viral and informing the discourse. We spend a ton of time trying to crawl out from under bad impressions formed during and immediately after the game.

When I read Houston’s take about “bad impressions” (or “preconceived opinions” as I might have phrased it) I was reminded of a book I once read by Jean-Francois Manzoni, a Professor for Leadership and Organizational Development in Lausanne, Switzerland. His book is titled “Set-up-to-Fail Syndrome: Overcoming the Undertow of Expectations” and describes a dynamic that essentially sets up perceived underperformers to fail.

Back in 2011, I wrote about the Pygmalion Effect which explains how once an expectation is set, people will act in certain ways that are consistent with that expectation, causing the results of the expectation to become true – even if the initial expectation is based on a false premise.

The Set-up-to-fail Syndrome is essentially the exact opposite of the Pygmalion effect. It describes a dynamic in which employees perceived to be mediocre or weak performers live down to the low expectations their managers have for them.

Manzoni’s basic premise is that human beings apply labels to others all the time. A positive label in many ways is the equivalent to a get-out-of-jail free card: many mistakes will simply be overlooked or downplayed. A negative label requires an inordinate effort to overcome, if it can be overcome at all.

The reason for this is that applying labels helps us make up our minds and form opinions faster without having to painstakingly analyze and evaluate all available facts.

I could go on and on, but you get the picture. These are labels that cling tighter than a mermaid’s T-shirt and last longer than a white crayon. Let’s look at two labels a little more closely.

One of the newer narratives that have popped up this season is that Prescott regularly misses open receivers. And suddenly folks are seeing open receivers all over the place – but are these fine folks simply seeing what they want to see (or what the narrative dictates they have to see)?

A starting QB for a 25-14 team in today’s NFL is being questioned about whether he can pass at all to guys who routinely get open. Parts of this fanbase are lost without a compass or a map. https://t.co/jJIc7Wivl8

Perhaps you remember the following play from the game against the Jaguars:

Here’s what Tony Romo had to say about that play:

“Boy, I tell you what, he is very fortunate. Because obviously this disappoints, but they also had a touchdown on this play.

If we get a chance to see this from above, from the All-22, I tell you, watch the running back, the design right here: you see Zeke Elliott. I want you to watch him on this play.

You don’t see this, now look at how open that is. I mean, a walk-in touchdown.

Now you’re fortunate to get the ball back and you get a first down, but you’re going to look back at the tape and be, like, AAARRRGGHH, boy, we had someone wide open. That’s a really well-designed play.”

Tony Romo has had spectacular success as an announcer, but this is one play he simply got wrong. It is true that at the very end of the play, Elliott was indeed running towards the end zone without a defender in sight.

But if “you’re going to look back at the tape” what you’ll see is that Dak Prescott was flushed out of the pocket by poor pass protection long before Elliott ran free as an unmarked receiver downfield.

Here’s a screenshot from the exact play that shows Dak already up and running while Elliott has just barely cleared the linebackers.

If you were looking for an open receiver, you would have found one on this play, just like Romo did. Doesn’t mean that the open receiver was an actual viable option on the play.

No QB can stand up to all-22 scrutiny on plays that don’t work. You can almost always find at least one receiver who was “wide open” at some point on any given play. Virtually every unsuccessful pass play can be blamed on the QB, if that’s the desired narrative.

“Defenses are loading the box because they don’t think Dak Prescott can beat them.”

I recently saw a conversation about defenses not taking Dak Prescott seriously as a passer, which is why those defenses were regularly loading the box with “8, 9, sometimes 10 in the box to stop Zeke.”

I don’t think I’ve ever seen a 10-man box outside of a goal line stand or perhaps a 4th-and-1 situation, but that’s beside the point.

The issue here is the self-fulfilling nature of such labels. Once folks buy into such a label, they will begin to see what they want to see. So every time folks see a safety move down into the box, they’ll take it as further proof that defenses load the box against the Cowboys because they don’t think Prescott can beat them through the air.

Never mind that that defenses load the box far less against Elliott than against many other running backs. NFL.com’s Next Gen Stats conveniently keep a tally of how often running backs run against 8+ defenders in the box. Turns out, Ezekiel Elliott faced loaded boxes on just 24% of his runs, which ranks him 20th among the 47 qualifying running backs with at least 40 attempts so far this year.

This doesn’t mean that there aren’t situations where defenses do load the box more heavily against Elliott (perhaps on 1st-and-10), but those situations probably have more to do with the threat Elliott poses to defenses than with defenses not taking Prescott seriously as a passer.

Because by that circuitous logic, defenses would not be not taking guys like Ben Roethlisberger, Matthew Stafford, or Philip Rivers seriously either.

These are just two examples of how subscribing to a given label can lead to all sorts of weird mental gymnastics folks go through to support a narrative. In another discussion I saw recently, folks were trying to differentiate between Prescott’s accurate and inaccurate completions in an effort to “prove” Prescott’s lack of accuracy.

Manzoni calls it labels, others call it prejudices, filters, or stereotypes. We use them all the time. They are a kind of mental shortcut which we often use to form judgments and make decisions. The downside is that these shortcuts usually involve focusing on just one aspect of a complex problem and ignoring others.

My point here is simply to point out the pervasiveness of labeling, how quickly it happens, and how it can distort our view of what’s really going on, like when we try to see something through an out-of-focus lens: we’ll see something for sure, but are we sure we’re seeing the right thing?

Subscribing to these labels inevitably leads you down a rabbit hole that ultimately results in the ignorant certainty that you’re right and people that don’t agree with you are stupid.

It’s the cardinal sin of many self-styled “analysts”.

Most of the labels I used in this post were negative labels associated with the Cowboys, which also exposes my own label: I generally view the Cowboys a little more favorably than many others do. But understanding your own use of labels and questioning their validity is the first step in making yourself a more knowledgeable fan.

In sports, there is one sure-fire way of getting rid of negative labels: winning. Winning is a great deodorant. If the Cowboys string together a few wins and suddenly find themselves back in playoff contention, a lot of these negative labels will disappear and will be replaced by – you guessed it – positive labels.

Doesn’t make those labels any better or more valid, but at least the mood around Cowboys Nation might improve a little.