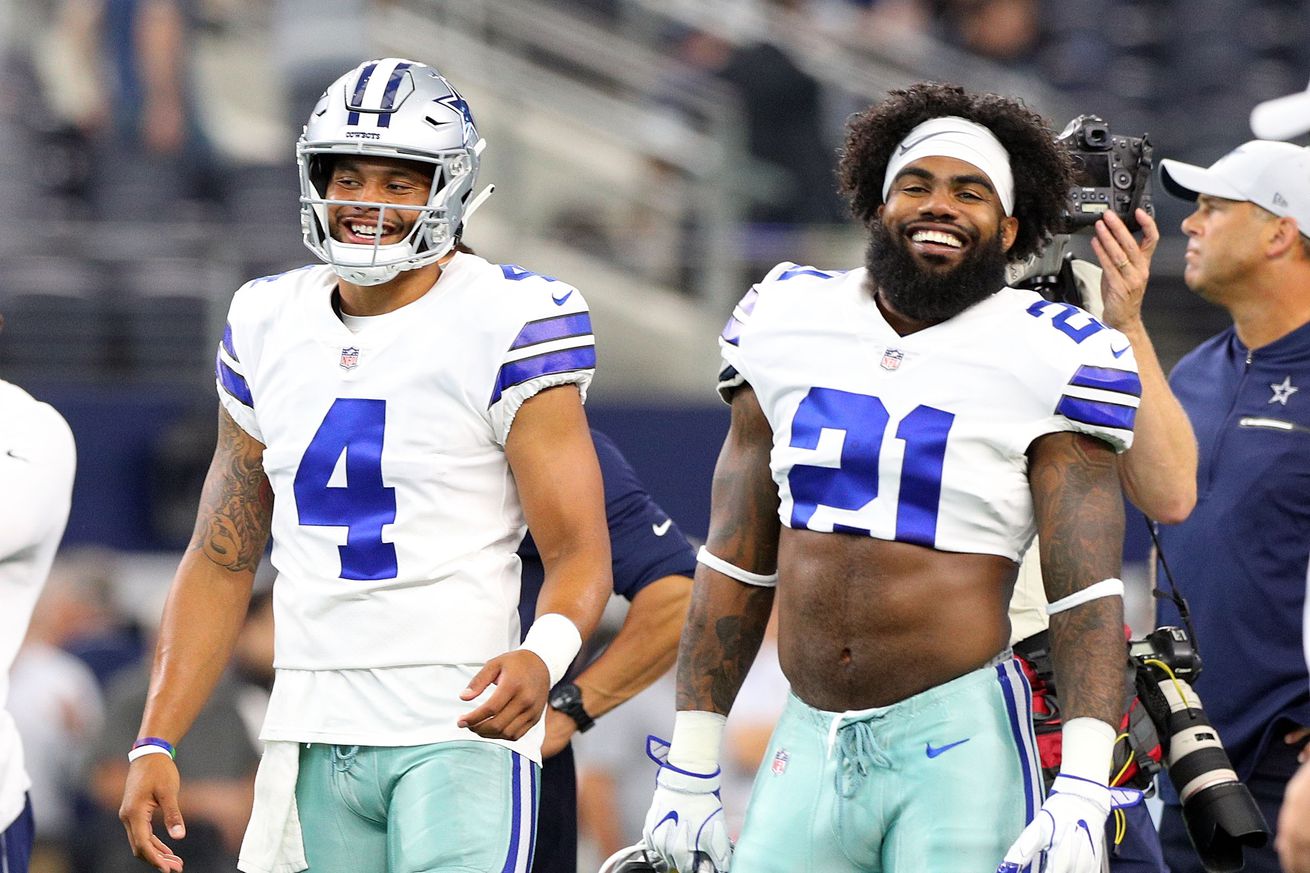 Here’s what we want to happen for the Cowboys playoff chances.

As there are eight before it and eight after it, Week 9 is officially the Hump Week of an NFL season.

We know who teams are by now. Their identities are firm, their cards are on the table, and everyone is doing everything that they can to make sure that they are playing football past Week 17. In a league where only 12 of the 32 teams get to do so, it can be a difficult road.

The Dallas Cowboys find themselves with a 3-4 record at the season’s midway point. They’ve already had their bye and we won’t see them until Monday night when they host the Tennessee Titans while debuting Amari Cooper.

What about before Monday night, though? Sunday is full of NFL games and a lot of them can/will impact the rest of the Cowboys season and are therefore important. Who do we need to win these games? Who are we rooting for? Here’s this week’s official rooting guide.

There are seven games taking place in the early slot of Week 9’s Sunday action, but three of them feature two AFC teams and are therefore not something that concerns the Cowboys. Amazingly, of all six teams involved zero are from the AFC South so it’s not like any of them even play Dallas this season. Root for who you please here.

The Buffalo Bills are coming off of just playing on Monday Night Football themselves and they’re hosting the Chicago Bears who might be Khalil Mack-less for the second straight week. Chicago is 4-3 on the season and could very well be a team that’s vying for a wildcard spot come playoff time. It’s common sense to root for AFC over NFC teams.

The NFC South matchup between the Tampa Bay Buccaneers and Carolina Panthers is certainly an interesting one and will feature Ryan Fitzpatrick returning to the position under center for the Bucs. Dallas will host Tampa Bay in Week 16 (maybe we’ll get another kettle game) and already lost to the Panthers. Between the two, odds are definitely higher that Carolina will be a contender come late December than the Buccaneers so we need them to take any loss they can from here on out.

A similar logic is at play between the Detroit Lions and Minnesota Vikings as they clash within the NFC North. Minnesota is much more likely to be the team in contention than the team who’s head coach did this. It might be tough for Detroit without Golden Tate on their squad but they do now have former Cowboys receiver Andy Jones taking his place. Championship!

The Washington Redskins are the only division rival of the Cowboys to play in Week 9 as both the Philadelphia Eagles and New York Giants are on a bye. Atlanta has the ability to potentially be a wildcard contender with the Cowboys down the road, but the most important thing the Cowboys can ever get across the league is a loss from a division rival. This is the most important thing we’re rooting for this week as the Redskins are already 5-2. Go Falcons.

The Houston Texans traded with the Denver Broncos for wide receiver Demaryius Thomas this week and that’s particularly spicy today of all days because the Texans visit the Broncos. Rooting for either side here doesn’t necessarily influence the Cowboys one way or another so let’s just root for a good time.

Onto more serious matters, the Los Angeles Chargers visit the Seattle Seahawks on Sunday. This falls under the classic “AFC over NFC” umbrella, but it has a pinch more of oomph as the Seahawks are a team that beat the Cowboys this season. We need them to have a worse record than Dallas at any cost.

The game of the afternoon is undoubtedly the Los Angeles Rams at the New Orleans Saints. The logic in rooting for the Rams to keep up their undefeated season is simple. At this point they can just run away with the number one seed (which would also keep them incentivized to beat Seattle for the second time in Week 10 and we just discussed needing them to lose) but beyond that the Saints aren’t necessarily a lock to win their own division.

While the Saints certainly look like the best team in the NFC South, the Panthers are hanging around and getting hotter with each passing week. If somehow Carolina were able to leapfrog New Orleans, we would need them to be beneath the Cowboys in the standings and as an added point to all of this, Dallas will host the Saints later this season (when Gil Brandt goes into the Ring of Honor). The Cowboys still have the ability to control something against the Saints so they can add to whatever help they get come late November.

It’s a strange site to see what with the Green Bay Packers playing like a team that could miss the playoffs without suffering an Aaron Rodgers injury, but such is life in the NFL these days. We don’t need to take any chances with the Packers. We need them buried. Get it done, Pats. Get it done big time.

Obviously we’re all also rooting for the Cowboys on Monday night against the Titans, but that goes without saying. If we can get all of these (hopefully the all-AFC games reward you in fantasy at least) that would be great:

How many do you think the Cowboys will get? Which ones?