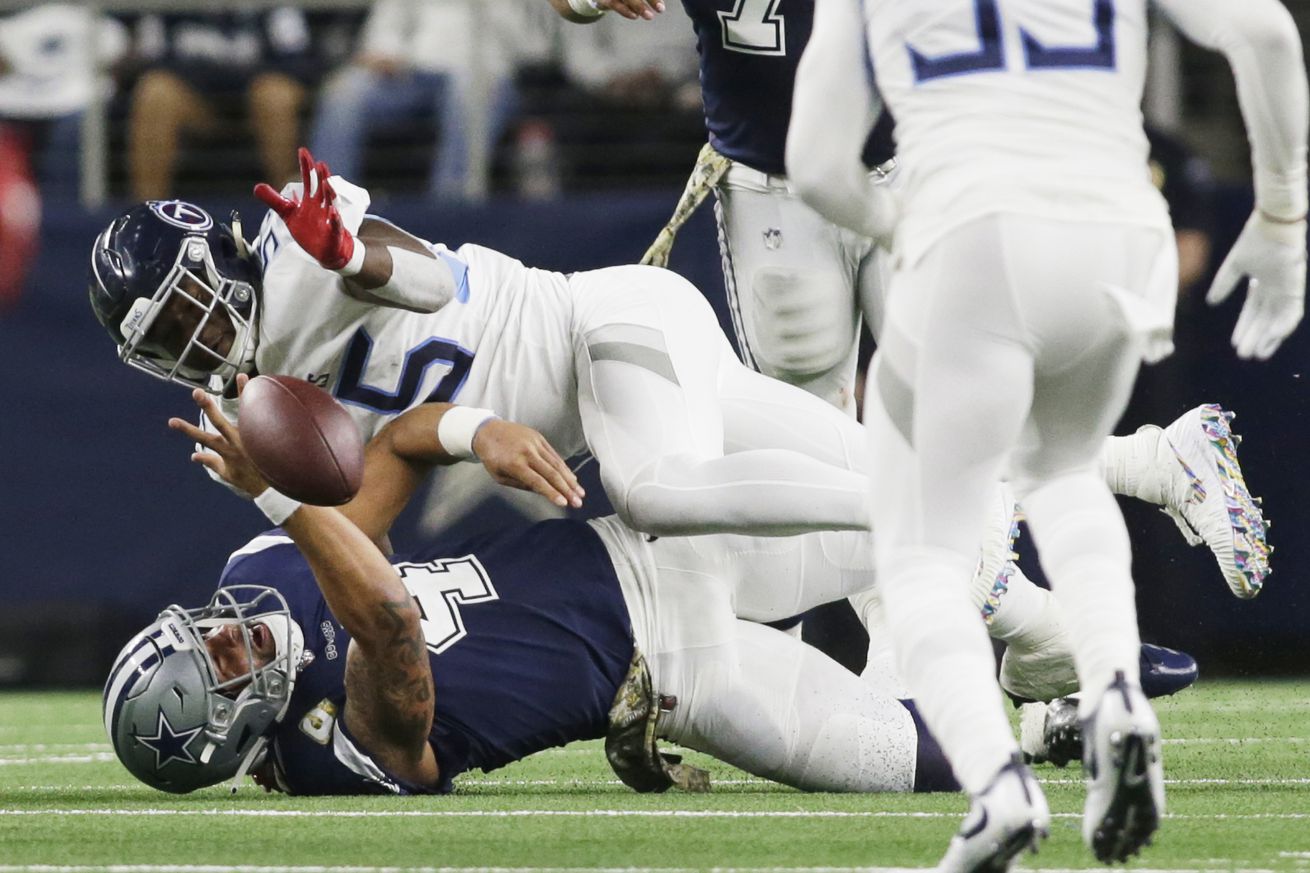 Is the Jason Garrett era finally coming to an end?

Needing a win to give meaning to the rest of the 2018 season the Dallas Cowboys played their worst game of the year, losing to a mediocre Tennessee Titans team. Does this finally signal changes in the team’s leadership?

Dak Prescott and Jason Garrett’s futures on line after another Cowboys’ loss – Todd Archer, ESPN
It was an ugly loss in many way and here is the rundown.

To come up empty at AT&T Stadium, where they had been perfect thus far this season, can only be viewed as deflating. With eight games left the Cowboys still have a mathematical chance to win the NFC East or earn a wild-card bid, but all of their faults were on display against the Titans.

On the Cowboys’ third possession, Prescott forced a pass to a double-covered Cooper in the end zone from the Tennessee 6-yard line on second down. Instead of another chance on third down or a chip-shot field goal, Prescott went to his new weapon haphazardly and was intercepted.

On the Cowboys’ first possession of the second half, Prescott was sacked by Jayon Brown and fumbled. Wesley Woodyard recovered and like the Titans did after Prescott’s first turnover, they turned it into a touchdown for a 21-14 lead.

5 thoughts from Cowboys’ loss to Titans: Plenty of blame to go around, but it starts with Dak Prescott – Jon Machota, SportsDay
Five observations from Monday nights’ debacls and it starts with the quarterback.

If the Cowboys can’t beat the Titans, how are they going to compete with Philadelphia, Atlanta, Washington or New Orleans over the next four weeks? Tennessee was supposed to be the best shot at a win. There’s plenty of blame to go around, but it begins with Dak Prescott. He just wasn’t accurate enough and had two costly turnovers that just can’t happen in a must-win type game like Monday night was. The running game wasn’t great and the offensive line continued to have problems. No points in the second half can’t happen coming off the bye against a three-win team.

The Cowboys promised to get receiver Amari Cooper involved early and often. He caught an 11-yard pass on the second play of the game and had four targets in the first quarter. His third target was a four-yard touchdown pass on a brilliant route. Unfortunately, his fourth target was a force in double coverage by Prescott in the end zone that was intercepted by safety Kevin Byard, turning what could have been 10-0 or 14-0 into 7-7 which the Titans turned into a touchdown drive. Cooper had a 15-yard reception on a touchdown drive late in the second quarter. Cooper finished the game with five catches for 58 yards on eight targets. But he wasn’t much of a factor in the second half and his presence didn’t open up anything for receiver Cole Beasley on the inside or the running game. Beasley had 3 catches for 16 yards all on the final drive and Ezekiel Elliott has 17 rushes for 61 yards.

Missed opportunities, poor red zone play, third-down deficiencies. In the end it all added up to a 28-14 Dallas Cowboys loss to the Tennessee Titans in front of a sold-out crowd and a prime-time Monday Night Football audience.

This was a matchup that featured two of the NFL’s premier defenses with Dallas coming into the game having given up the fewest average points, 17.6, and Tennessee ranking third at 18.1.

But on this night, it was the visiting defense who outplayed the home side. As a group, the Cowboys sacked quarterback Marcus Mariota four times and provided two fumble recoveries, but as the game wore on, the defense wore down. The Dallas unit eventually gave up 340 yards of offense to the Titans, including 125 on the ground.

And where Dallas really came up short was on third downs. Tennessee was able to convert 11 of 14 third-down attempts, an ugly 79 percent success rate surrendered.

Conversely, on the other side of the ball, the Cowboys offense had its troubles against the Titans’ stout defense. After Ezekiel Elliott got off to a fast start, rushing for 29 yards on Dallas’ first possession, he was held to just 32 the rest of the way to finish with only 61 yards rushing.

What we learned from Titans’ win over Cowboys – Jeremy Bergman, NFL.com
It’s interesting what’s obvious to many outside the Cowboys’ organization seems to elude the teams’ leadership group.

Cooper can’t cure all of Dallas’ ills on offense. The causes of the Cowboys’ struggles can be traced back to — again — predictable and ineffective play-calling (stuff, pass, screen) from fourth-year offensive coordinator Scott Linehan; an inefficient run game from Ezekiel Elliott (61 yards on 17 carries) and a waning offensive line; and brain-dead pocket awareness from Dak Prescott (five sacks taken for the third time this season).

The Cowboys also can’t cash in on gifts. Dallas was handed three early opportunities to take control of this game early on, thanks to two Titans fumbles, but cashed in on only one. Instead of going up 14-0 early in the first, the Titans were up 14-7 midway through the second. When Tennessee, up seven, missed a gimme field goal early in the fourth quarter, Prescott responded by taking a sack on first down, dumping it off to Zeke for no gain and taking another sack. Dallas punted from its 10 and the Titans salted the game away with a long touchdown drive.

The Dallas Cowboys lost another game and then got destroyed on Twitter – Andy Nesbitt, ForTheWin
When you’ve become a meme for opposing fans and haters…well, it sucks.

Jason Garrett and the Dallas Cowboys lost another ugly game Monday night, as they fell to the Titans at home, 28-14.

The face when you see the Cowboys are playing in a nationally televised game next week too pic.twitter.com/9xI1jmJljR

Travis Frederick hopes to play again in 2018, but his timeline remains uncertain – Calvin Watkins, The Athletic

In big-picture news, Watkins gives up some insights into how Travis Frederick is progressing with his Guillain-Barre syndrome.

At practices when the Cowboys are stretching, Frederick doesn’t take part. He’s not wearing a helmet, shoulder pads or cleats. Instead, he wears a baseball hat, a Cowboys t-shirt and shorts, moving to the spot where the offensive line will begin their individual drills.

As the rest of the Cowboys stretch, he waits. At the end of the stretching period, Jason Garrett asks a player to lead the team in jumping jacks. It’s a daily routine, much like the loud music being played during stretching and individual drills. All the players jump and move their arms and legs as Frederick waits.

“I’m feeling alright,” he said. “I’m continuing to improve at a very slow and steady pace. It gets monotonous at times but knowing the prognosis is good and that if I continue to work on it and if I work on being patent, things are going to be good, that’s certainly helpful.”

BTB commenter boyman reminds us why we cheer.

I don’t just like the Dallas Cowboys when they make the decisions I think they should, or changed all of their schemes and philosophies to match some scheme or philosophy I wish that they had. That wouldn’t be liking the Dallas Cowboys; that would be liking my own opinion.

I don’t just like the Dallas Cowboys while hating their coaches and players, wanting all or most of them to be fired, wishing instead we had the players or coaches of other teams. That wouldn’t be liking the Dallas Cowboys, that would be (at most) loving their uniform, or their name, or some memory about their past.

Michael Irvin gets into Stephen A. Smith screaming match over Cowboys – Charles Curtis, ForTheWin
It’s not pretty and it’s not particularly interesting. But watching Michael Irvin passionately defend #CowboysNation is something.

Hall of Famer and NFL Network personality Michael Irvin was a guest on the Stephen A. Smith and Max Kellerman morning debate show, and when Irvin’s former team, the Dallas Cowboys, came up. things got extremely heated.

Irvin claimed the Cowboys are in the same conversation with the Patriots and Steelers as all-time great NFL franchises and that there’s the “beginning of a new age” with the acquisition of Amari Cooper, “a time when the Cowboys will rightfully regain and take their proper spot among kings!”