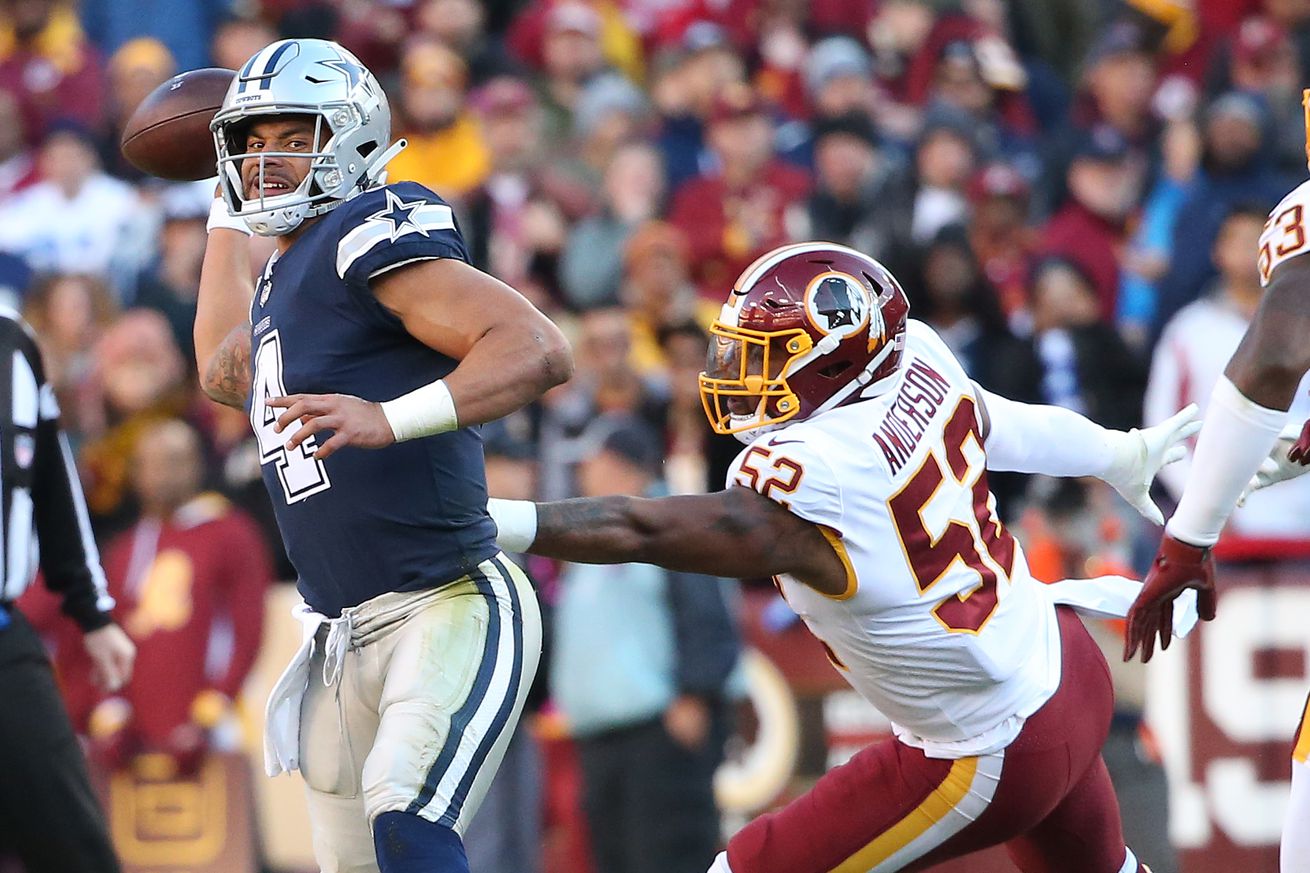 The Dallas Cowboys have been an offensive mess this season, with the lone exception of a now inexplicable blowout of the Jacksonville Jaguars. Trying to sort out just why has brought up several culprits, with the two most frequently accused being offensive coordinator Scott Linehan and quarterback Dak Prescott. But which is the biggest factor in this failing season? Our Michael Strawn and Tom Ryle dive into that in their weekly Cowboys debate.

Michael: It’s very possible that both are the problem. Dak Prescott may prove to never be more than a poor-to-average NFL starter. But we don’t know that he can’t be better than that because he’s handcuffed by this archaic offense and (until the addition of Amari Cooper) perhaps the least talented group of targets in the entire league. Obviously, Dak is never going to be a Brady, Brees, or Rodgers who can throw pinpoint passes to barely open receivers. But he does have skills and Linehan’s scheme fails to take advantage of them. The coaching staff stubbornly insists on trying to fit a square peg into a round hole. Louis Riddick sums it up pretty well:

If you have a dual run/pass threat at QB, and are not trying to incorporate some of the ball handling/backfield action/play action like the #chiefs, #panthers, #bears, #texans use, then you shouldn’t be an offensive play caller at the #nfl level.

Tom: Look, I am no Linehan lover, but watching Dak play this year makes it impossible to not question whether he is really able to be an effective NFL quarterback. He seems to lock in on his first read, doesn’t audible out of plays that the defense is completely ready to stop, and misses far too many passes for no apparent reason. I wonder sometimes if Linehan’s play-calls are meant to give Dak something simple to do, but then have him just fail to accomplish the task. And given some times when it certainly looks like he had a read option and just made the wrong decision, I’m not sure Linehan would be right to trust him with more running responsibility. Yes, he may be that square peg, but I think it was not unreasonable to expect more growth as a passer/decision maker than he has shown.

Michael: Ugh. I thought I posted an unassailable opening and get obliterated on the retort. It’s impossible to argue with any of your conclusions regarding Dak. He’s guilty of everything you say and, worse, seems to be regressing in front of our eyes each week. The point still stands however: the current approach is a proven failure. When one strategy has been proven wrong it’s up to the coaches to adapt, evolve and develop a new one. There’s no guarantee of success, but there’s at least a chance, whereas there’s no chance with the current approach. I mean, Dak’s single greatest attribute is his running skills and Linehan makes virtually no effort to leverage that skill. That’s criminal in today’s NFL.

Tom: Well, there’s another way to look at Dak being the problem, and that is the coaching staff deciding he was the solution back when they made the now-infamous “hot hand” decision. It seems, in retrospect, that they were convinced they could make him a pocket passer. That seems to be integral to Linehan’s scheme, and now he simply doesn’t have someone who can fill the role. It may just be beyond Prescott’s ability to master. That is not really his fault, and it does put some of the onus back on Linehan – but it also spreads the blame to the rest of the staff, including Garrett and the personnel department. They all should have done a much better job evaluating what Dak was and what he was capable of becoming. It makes Dak the problem, not him as a person or player, but as a bad acquisition for a team that just wasn’t constructed for him. (Remember, Ezekiel Elliott was supposed to be help for Tony Romo.)

Michael: I’ve been blaming Linehan but let’s face it, the real issue is the head coach. The offense being run is Jason Garrett’s. And if Garrett ordered Linehan to start employing the concept Riddick outlines in his tweet then Linehan would do it – or at least try. And you’re exactly right, the franchise as a whole, including Will McClay and Jerry and Stephen, all badly misjudged what they had in Dak. But I also can’t help but think Dak hasn’t been coached up very well. At a minimum, his footwork should be better. Anyone with a reasonable learning faculty can learn how to drop back, set their feet properly, and employ proper stances to deliver the ball. ANYONE. I seriously wonder what this staff spends their time on in all those organized activities and training camp sessions because Dak’s footwork is atrocious. So I’m back to Linehan and, I guess Kellen Moore, as people who just aren’t getting the job done.

I get back to my original stance. All the criticism of Prescott is well deserved. Changing schemes or innovative play calls aren’t going to fix all his issues. But they might – might – allow him to make more plays than he is currently. But we don’t know that because the coaches simply won’t try. And that’s hard to understand.

Tom: I’ve certainly got a bone or two to pick with the coaches, but one thing does keep coming back to me. That is the severe limitation the CBA places on how much time the staff has to work with the players. They are forced to spend most of it on installation of plays and game-planning, which leaves almost no time for drilling on things like footwork and reading the field. That is something that Prescott can do on his own with outside coaches, and either he hasn’t done enough, or it hasn’t taken.

There is certainly plenty of blame to be assigned here, but I still think it comes down to the Cowboys having the wrong player at QB for their scheme. It still has a bit of the chicken or egg about it, because they don’t appear to have done much at all to adjust the scheme to fit their QB. This may be one that neither of us is all that far off, because both are clearly factors.

So that leaves it in the eye of the beholder, I guess. For the readers, let us know how you see it in the comments.