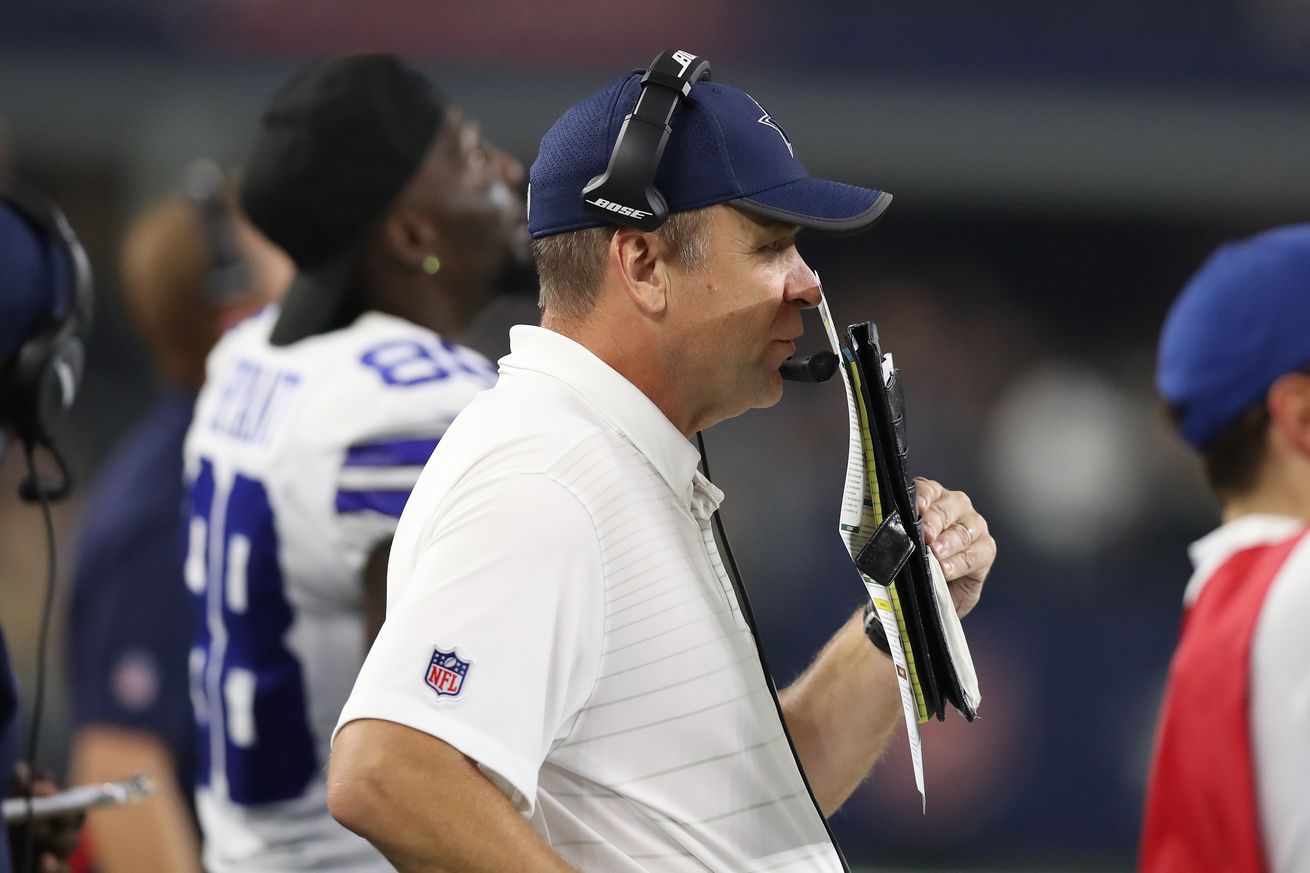 We can see things aren’t working. What is hard to figure out is why nothing seems to change.

Let’s get this straight right up front: This article is not about answers for the Dallas Cowboys and the offensive ineptitude that is dooming their season. There are no suggestions about what they need to do, or how to do it. No, it is all about the questions. It also is not about the players. This is all about the coaching staff and ownership. We have long known that Dallas is the most unique organization in the league, with the owner and his son serving as the general manager and his chief assistant. But why are things going so badly, with no apparent attempt to correct anything?

Maybe there is a little PTSD from the trampling by the Titans for me, but over the past few days, these things have just been swirling ‘round and ‘round my head, like the way the 2018 Cowboys season is orbiting that drain. And the more I try to sort things out, the more I keep running into the same idea.

It looks like Scott Linehan is not even trying to fix things.

Now, there is one key assumption underlying this. It is that Linehan is indeed doing the main work in coming up with a game plan and is calling plays without any significant interference. There is certainly no reason to think otherwise, but it does make it hard to understand just why Linehan continues steering this ship right into that iceberg, and even yells at people to quit re-arranging the deck chairs because he likes them just the way they are.

We have collectively been screaming about the predictability of the Dallas offense all season. Over at The Athletic, Bob Sturm did one of the best jobs I have seen in illustrating just how true that is. He includes videos of three virtually identical third down plays. Here’s one (it may not be supported on all devices, so what it shows is all the receivers going to the sticks, and then curling back to the quarterback, a play so many of us have become sick of).

Here’s what Sturm has to say about it.

If you are a defensive coordinator and you call up all of the Cowboys third and longs, you’ll see the same thing we just did: The same play, over and over again. How hard is it to defend routes that are straight lines north which predictably turn south? No looking for soft spots, no crossing patterns, no high-low conflicts, no overloads, literally nothing. No horizontal attacks, not even a simple dig route?

Look, I get that Prescott is a limited QB, but is this really the best deployment of your resources to try to win football games? I could show you these clips all day. I have no agenda here, but the public execution of a young QB in the public is missing the real story. This is your offensive scheme?

It’s easy to pull Dak’s numbers on third down and long. They are bad. But look at these plays. Each one features loaded secondaries sitting on the routes you always run because you always run them.

Blame the QB? Sure. He deserves some blame for this mess. Unfortunately, it doesn’t look like his coaches are helping him at all. I fail to see how you cannot place MOST of this blame on the architects themselves.

Sorry about the tone, but these are difficult times to offer rosy appraisals of the situation. This team needs some good news fast.

It is not the only thing that is predictable, but given the low rate of converting third-and-long for the Cowboys, it is perhaps the most egregious.

And that comes back around to the underlying question here: Why? Surely that is not the only play for third-and-long they have? And if it is, why are they not coming up with something else? Geez, if everyone is expecting you to do this, wouldn’t it seem like a good idea to have someone do a double move and go deep? Even if Dak Prescott didn’t hit him, it would force the defense to loosen things up. Shame the Cowboys don’t have a wide receiver who can do . . . oh, wait, now they do in Amari Cooper. Of course, they could also have someone do a crossing pattern and put some moves on to get open in another way. Shame they don’t have a slot . . . oh, yeah, Cole Beasley.

There is an old cliché that doing the same thing over and over and expecting a different result to happen is a definition of insanity. Well, this is about as perfect an example of just that as you will ever see.

As stipulated above, the assumption here is that this is all Linehan’s doing. Now, if Garrett or even Jerry Jones has told him that this is the only play he can run on third and long, then the problem is different (and maybe even worse). But for this discussion, we’ll stick it to Linehan. And wish we could get him in an interrogation room, slip him a little sodium pentothol, and ask him one simple thing. WHY?

It just makes no sense. Is it stubbornness? A determination to prove that his way will work? That is highly illogical, because it not only fails, but now is little more than a guide to defenses on when and how to shut the Cowboys down. When everyone in the secondary, the defense as a whole, the opponents’ sideline, the patrons in the stands, the announcers, the entire TV audience, and random people stopped on the street can tell you exactly what each receiver is going to do, where they are going to do it, and when, almost any defense out there can stop it.

There’s actually only one way to give that particular play any chance at all, and that is to send out a receiver or receivers who excel at winning jump balls against defenders. Maybe that was the plan . . . oh, wait, they released the one guy they had who was really, really good at that during the offseason. (By the way, hearing about Dez Bryant’s injury was so very sad. All the best to him.)

It almost looks like a case of deliberate sabotage. Which is even more insane.

That’s why there are no solutions to offer here. This is total nonsense, in every meaning of the word. That play, thanks to the work by Sturm (and he is far from the only one to bring this up, he just did it so well) is just one of the easiest ones to see. We also see a lot of other tendencies from the Cowboys that appear to have been figured out by just about every other team they play (I have no idea why the Jacksonville Jaguars were such an obvious exception). The situation cries out for Linehan to change things up, try something different. Heck, the first team he did that to might be so stunned that they can’t recover.

That’s the problem, though. If he hasn’t found reason to change at this point, with the media and fans cleaning out bins of pitchforks and torches in most of Texas and several surrounding areas, will he do so now? Maybe the visible anger from Jerry Jones after that crap against the Titans will motivate him, but given the intransigence so far, you have to wonder.

This has already become absurd. If Linehan does manage to extract his cranium from the nether reaches of his alimentary canal and do something about this, does it really matter? The upcoming five games look really tough. And the first eight weeks of the season have already provided sufficient evidence that he needs to go. Maybe he knows that, and sees no reason to fix things for a team that he will be leaving.

Tin-foil hat stuff? Yeah, it is. But what is the real explanation here? Nothing makes sense. Maybe Jerry Jones is secretly doing the game plans and selecting plays himself. Or Jason Garrett is the one really calling these inexplicable shots. But that is not really any more sensible.

I got no answers. Maybe someone will get an inside scoop on this one day. But I rather doubt it. It is the great mystery of the 2018 Cowboys season.