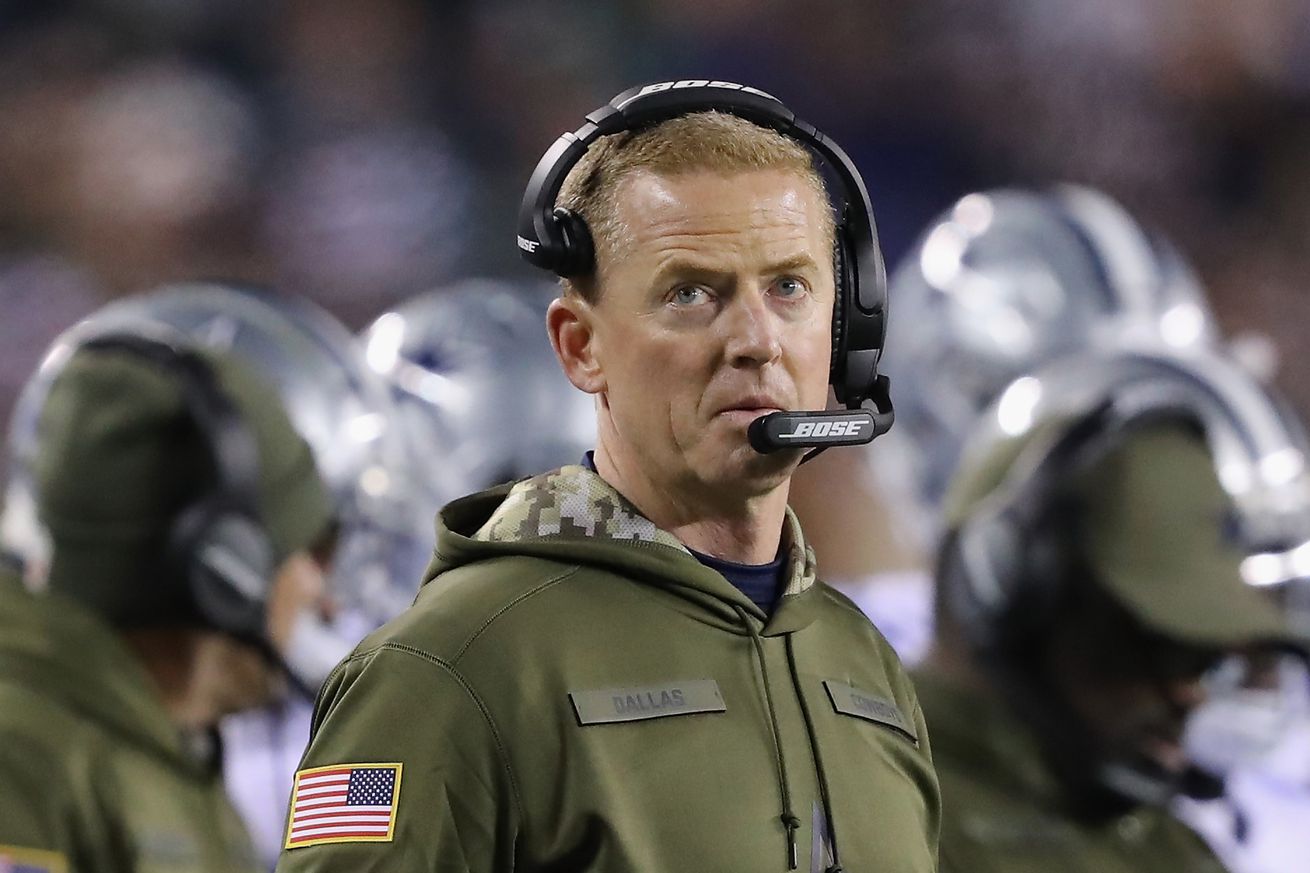 The head coach spoke after the latest Cowboys win.

It’s Monday following a Cowboys win, and an Eagles loss, that means head coach Jason Garrett addressed the media. Here’s what he had to say. (All Garrett answers are paraphrases of what he said and not direct quotes).

Jason Garrett was impressed by the fourth quarter

Jason Garrett was quick to note that the fourth quarter the Cowboys played in Philadelphia was symbolic of the whole game. He talked about maintaining focus and execution noting that it takes 60 minutes to win a game. Obviously Dallas jumped out to a lead against the Eagles and they bounced back, but Garrett was proud of how his team responded.

There was a Jason Garrett speech on Saturday night

It was reported that Jason Garrett gave a speech to the Cowboys on Saturday night where he described what the Philadelphia environment was going to be like. He declined to get into the details of it all simply noting that he wanted to prepare the team for another win that they had to try and get.

Amari Cooper said Jason Garrett gave the team “a heck of a talk” Saturday night, describing what to expect when the Cowboys played at Philadelphia Sunday night: pic.twitter.com/DCEXoDdizI

Cowboys are focused on themselves

Jason Garrett isn’t getting into hypotheticals about what’s going on with anything beyond what he can control. He kept true to who he’s always been as he discussed focusing on where they can devote their own attention and focus.

Maybe the Cowboys were more chippy than normal

Playing with an edge is something that the Cowboys want their players to do, and Sunday in Philadelphia they definitely had one. The Cowboys and Eagles got into a bit of a scuffle early on and it seems like Dallas liked that.

Tensions are high in Philly where a scuffle broke out in pregame warmups. #SNF #DALvsPHI pic.twitter.com/64izjpSeYc

What Amari Cooper has done in two games with the Cowboys has definitely been impressive. Jason Garrett gave credit to both Sanjay Lal and Scott Linehan (whom he was quite complimentary of throughout) for how everything has gone to this point, noting Cooper has played a lot of football in a short period of time. He kept firm in that their biggest challenge is making sure that he’s ready to go.

Amari Cooper may or may not be helping third-down conversions

Jason Garrett wouldn’t give Amari Cooper any specific credit when it came to what the Cowboys are doing on third down, but he did talk about how converting has a lot to do with “being able to attack defenses different ways.”

Obviously Cooper gives the Cowboys a different sort of threat in the passing game which is part of why they’ve had more success on third downs as of late.

Jason Garrett was asked for specifics when he said Amari Cooper was a great route runner. He talked about his release, quickness, body control, and overall understanding of the job that he had to do. If you ask Garrett football-related questions he generally goes on for a while and this was definitely one of those times.

Xavier Su’a-Filo did a great job

The Cowboys were down their starting left guard in Connor Williams and had to face Fletcher Cox and Co. with Xavier Su’a-Filo at the position. Jason Garrett noted that Xavier battled hard and did everything he could to get up to speed.

Zeke had a great game

The Cowboys utilized their star running back in a multitude of ways against the Eagles and what he did was huge for the cause to get the Cowboys their win. Jason Garrett spoke to how great Zeke is and how on display it was in Philadelphia.

Jason Garrett gave credit to Sean Lee, Jaylon Smith, and Ben Bloom for what Leighton Vander Esch has been able to do, but he certainly gave a fair share to the first-round rookie himself. While he did note that it wasn’t a perfect game for LVE he did applaud him for making a lot of significant plays in the game.

Dak did a really good job

Jason Garrett also noted that Dak Prescott wasn’t perfect in Philadelphia, but he got particularly passionate when mentioning the “spirit” that the quarterback plays with. He talked about various circumstances that Dak managed to fight his way through, especially the sneak that resulted in a touchdown, noting that Dak is capable of fighting back like that. He specifically said “at no time did he ever blink” so it’s clear that he was impressed.

Dallas was going to go for it on fourth down early in the game before they had a penalty that made that all the more difficult. Jason Garrett said that sometimes it makes sense to do that, other times it doesn’t, and that it depends on the circumstances. He did say that the Cowboys “always want to be aggressive,” but that that doesn’t mean you’re going to go for every fourth down. He noted that there are a lot of things that go into decisions like this, but that they’re always trying to do the things that help your team win.

Jason Garrett was quite complimentary of Randy Gregory who happened to have himself a nice game against the Eagles. He said Gregory played well in the run in addition to the pass. He also gave credit to Tyron Smith for having himself a nice game.

Xavier Woods and Chidobe Awuzie had nice games too

Both Woods and Awuzie showed up to large degrees in Philadelphia, but Jason Garrett wasn’t at all going to get into discussions about whether or not they were the best games we’ve seen from them. He said they all played well and wanted to leave it at that.

Cowboys need to learn from this game

Dallas is moving on to the Atlanta Falcons and Jason Garrett wants one message to be taken from the Eagles win. It’s his desire that the Cowboys learn from the mistakes that they made in Philadelphia as they ready for a trip to Atlanta this Sunday.

Zack Martin’s situation is something that will go “day by day”, no decisions at left guard for now

Jason Garrett did say that the Cowboys got some favorable reports, though. He also noted that they haven’t made any decisions as to who is going to play at left guard again if Connor Williams can’t go.

There’s no worry about Brett Maher

The Cowobys have seen their kicker miss an attempt in three straight games, but Jason Garrett isn’t worried. Let’s hope he has no reason to be.