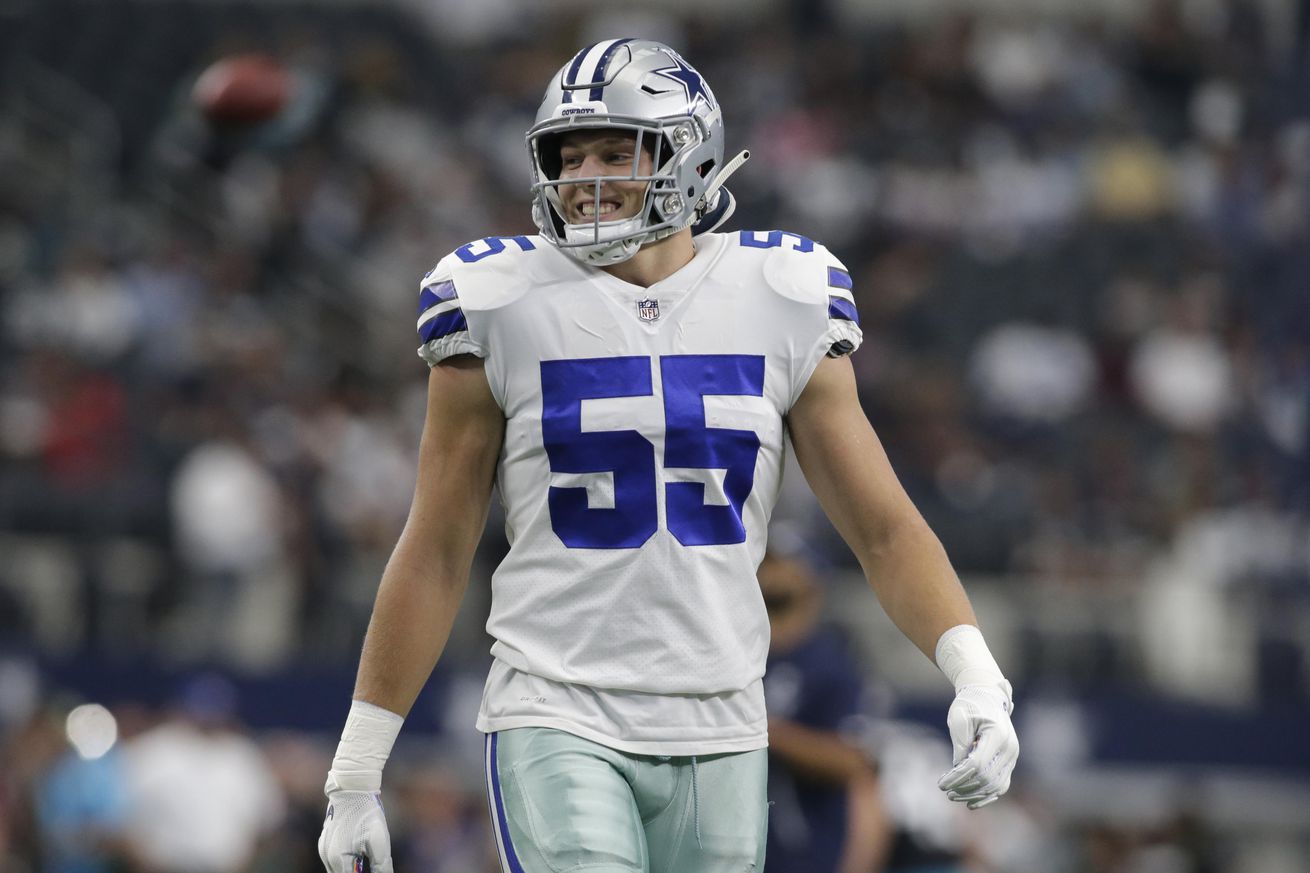 It’s also the week before the return to the Burning in Atlanta.

Ben Roethlisberger, Mitch Trubisky among Players of the Week – Jeremy Bergman, NFL.com
He did it the old-fashioned way. He earned it..

The Cowboys‘ first-round rookie linebacker was all over the field in Dallas’ win over the rival Eagles. Vander Esch recorded his first interception and racked up a career-high 13 tackles, the last of which was a shoestring 5-yard loss that set Philly’s comeback attempt back. This is the first honor Vander Esch has received in the pros.

Film room: Why Cowboys’ Leighton Vander Esch is the NFL’s best rookie LB — and one of its most effective, period – John Owning, SportsDay
Did someone say Wally Pipp?

Even though he was selected in the first round, no one thought Vander Esch’s transition from Boise State to the NFL would be this easy, especially considering he missed large portions of offseason activities and training camp because of injuries.

It didn’t matter. From the moment the Riggins, Idaho, native stepped on the field, he’s exceeded expectations, playing, at times, better than perennial Pro Bowler and Cowboys captain Sean Lee. In fact, Vander Esch’s play has led many to wonder whether Lee’s time with Dallas (as a player) should come to an end as the veteran linebacker deals with yet another hamstring injury.

In an age when defenses are getting smaller and faster, the ability to take on and defeat blocks is becoming scarce in the NFL. Teams are favoring the more athletic linebackers who can excel in coverage, rather than the big, lumbering linebacker who can play downhill and destruct blocks on a regular basis.

Luckily for the Cowboys, Vander Esch is essentially a new-age linebacker stuck in a defensive end’s body. Not only is Vander Esch more athletic than most linebackers, he’s also bigger than most of them.

The Marinelli Report, Week 10: Cowboys’ homegrown defense wins with game-changing plays – Bob Sturm, The Athletic
It’s pretty exciting to see the Cowboys have a pretty good defense for a change. What you may not realize is just how young this group is – which means the prospects for improving are danged good.

This defense is playing better and better, and “learning how to win.” But let’s not lose sight of the big story. Most of the defenses they are being compared to now in the standings and defensive rankings are filled with players in their veteran primes (25-28 years of age). The Cowboys definitely have players in that range with Byron Jones, Demarcus Lawrence, and a few others. But when you look at those under the age of 24, you find Chidobe Awuzie, Xavier Woods, Jaylon Smith, Maliek Collins, Jourdan Lewis, and Vander Esch. Wow.

Jason Garrett praises Xavier Su’a-Filo’s first start on Cowboys’ O-line: ‘He battled and competed hard’ – Jon Machota, SportsDay
There’s not anything really major in here. But when your backup guard is getting favorable reviews for his first performance against a formidable defensive line – well, it’s all good.

Xavier Su’a-Filo played well in his first start of the season at left guard, filling in for injured rookie Connor Williams. If Williams is unable to go this week, Su’a-Filo is expected to start again Sunday at Atlanta.

“In this league, one good game, it’s a good start, but especially as an individual you have to be consistent,” Su’a-Filo said. “And that’s the name of it.”

Should Cowboys Stick With Xavier Su’a-Filo at Left Guard? ✭ Brian Martin, Inside the Star
This is a discussion that is far from over – and that is not necessarily a bad thing. Plus, did someone mention Wally Pipp again?

I could go into a long debate as to who I believe the Cowboys should start at LG moving forward, but I think that would be a waste of our time. I think this is a situation that will work itself out one way or another this week against the Atlanta Falcons.

Nothing is set in stone right now, but I have a hard time seeing Connor Williams being ready to play this week after having knee surgery. It would be unwise to rush him back before he’s 100% healthy, especially after the way Su’a-Filo preformed against the Eagles. And if Su’a-Filo plays well once again, Williams may not get his starting job back.

PLEASE check out what recently signed #Cowboys LG Xavier Su’a-Filo does to the #Eagles DL on this play – a screen at the end of the 1st half to Galloway – #NFL abuse is real! #CowboysNation pic.twitter.com/Qfjd0hkFY7

Cowboys’ win over Eagles isn’t vindication for Jason Garrett — it just leaves one question he may eventually answer for – Kevin Sherrington, SportsDay
So the big win over the Eagles doesn’t mean the criticism of Jason Garrett is over.

We know all about the first-rounders the Cowboys have spent on Elliott and the offensive line, as well as Cooper. All justifiable. But the defense has caught up, surpassing its more celebrated half.

So if the Cowboys are so talented overall, how come their record says they’re just average?

That’s a question Jason Garrett may eventually answer for.

They’re capable of being absolutely miserable, as they demonstrated against Tennessee.

And they’re also a bunch that can put together a performance like Sunday’s.

“If that’s going to make you get fainthearted, you’ve picked the wrong spot. But that’s kind of the tenor of the visit. I just said to him, ‘Hearing all this stuff, it doesn’t have you weak-kneed, does it?’ “ (said Cowboys owner Jerry Jones).

This underscores why Garrett, 72-60 (including a 1-2 playoff mark) in eight-plus seasons, has one of the toughest jobs in the NFL. He’s overshadowed by the large persona of his team’s owner/GM, which coincides with the glaring spotlight of the league’s most popular team. Then again, that comes with the territory. It’s the inconsistency of his team, which improved to 4-5 on Sunday, that fuels the hot-seat buzz.

The Cowboys’ 27-7 loss to the Falcons in Atlanta a year ago sent the 2017 season into a tailspin. Dallas, which had won three in a row, was dominated as Dak Prescott was sacked eight times. It started a three-game losing streak, and the Cowboys missed the playoffs.

The offensive line, of course, may have a harder time pretending to forget. Falcons defensive end Adrian Clayborn had six of the eight sacks. Clayborn was able to take advantage of Chaz Green filling in for injured left tackle Tyron Smith. Clayborn has only four sacks in 17 games since.

Heck, he only has 11 solo tackles since that game.

Dak Prescott returns to Atlanta with chance to exorcise his futility – K.D. Drummond, Cowboys Wire
The game this Sunday against the Falcons is a chance to prove the Cowboys are finally out of the slump that started there almost exactly one year ago.

Atlanta throttled Dallas, relentlessly pressuring, hitting and sacking QB Dak Prescott eight times en route to a dominating 27-7 win. It dropped Dallas to 5-4, but more importantly it dropped their confidence in themselves.

Prescott lost his mojo. He started seeing ghosts in the pocket, worrying about pressure that was sometimes there but often times not. It not only affected his scramble radar, but his mechanics went in the tank as well. His accuracy went from average to woeful. Over the course of the next 16 games, some of it would return enough for Dallas to avoid turnovers and win games, but they were hardly the team they were before Atlanta 2017.

The good, bad and ugly from Dak Prescott on Sunday Night Football – Marcus Mosher, Fansided
This article comes up with a little stat that is worth noting.

Against the Eagles in Philadelphia, Prescott was hit nine times. That doesn’t even include a few vicious hits that he took in the run game as well. On the season, Prescott has been hit 60 times, the third-most in the NFL. To put that in perspective, Prescott was hit 60 times during his entire rookie season. Prescott is getting hit (and sacked) at an absurd rate due to injuries on the offensive line.

However, Prescott has managed to find a way to make enough plays to keep the Cowboys’ alive. His drive before halftime was one of the best I’ve ever seen from him in his career. Allow me to set the stage. Dallas got the ball with 1:33 left in the second quarter and just one timeout after the Eagles had just kicked a field goal to tie the game. Prescott proceeded to lead the Cowboys on an eight-play, 75-yard touchdown drive in a little over a minute to take the lead before halftime

Amari Cooper already opening up Cowboys’ offense – Kevin Patra, NFL.com
Amari Cooper is a superb wide receiver. But his impact on the Cowboys goes far beyond his personal stat line.

Cowboys receivers are generating more space in the two games with Cooper, per Next Gen Stats:

While 0.8 yards of separation more might not sound like a lot, it’s helped keep Prescott out of pushing the ball into tight windows. Prescott’s average target separation has gone from 2.9 to 4.0 yards, resulting in an increase in completion percentage from 62.1 to 70.1, according to Next Gen Stats.

The Cooper Effect also benefits running back Ezekiel Elliott. The Cowboys have increased their 11 personnel (1 RB, 1 TE, 3 WR) usage by 18.0 percent since the Cooper trade (third largest increase in NFL). In Weeks 1-8 Dallas used three WRs on just 52.7 percent of snaps. The past two weeks that number jumped to 70.7. Elliott has had much more success running out of 11 personnel, thanks to the less loaded boxes. Per Next Gen Stats, Elliott faces stacked boxes (8-plus defenders) on just 2.6 percent of rushes in 11 personnel. All other groupings, Zeke sees stacked boxes 46.7 percent of the time.

Travis Frederick regains sensation in his hands: ‘There is some light at the end of the tunnel’ – David Moore, SportsDay
The chances of Travis Frederick coming back this season are still pretty slim, but the hopes to get him back next season are definitely improving.

The Pro Bowl center recently regained sensation in his hands for the first time in nearly three months.

“It’s starting to come back in my hands a little bit here, which is good,” Frederick said. “Now it’s more just numbness, no tingling, and it’s more in the tips.

“I mean the fact there is some light at the end of the tunnel is definitely a positive.”

Gay Dallas Cowboys player Jeff Rohrer will marry his boyfriend – Cyd Ziegler, Outsports
This link is provided without editorial comment for those who might want to know more about this story. These paragraphs are quoted just to fill you in on his history with the team (it was a while back, after all).

Rohrer played for the Dallas Cowboys for six seasons, spending his final 1988 season on the sideline with an injury. By the time Jimmy Johnson arrived in Dallas in 1989, ushering in an era of youth and renewed excitement, Rohrer was part of the old guard, and injured on top of that. Rohrer never played a down in the regular season for Johnson.

Before his NFL career was cut short, he was an integral part of America’s team. Over the course of those six seasons with the Cowboys he started 41 games for legendary coach Tom Landry, racking up 7.5 sacks and four fumble recoveries, all in his final four seasons.

When he was drafted in the second round out of Yale, some people scratched their heads — sports columnist Jim Lassiter called him “unheard of.” When Rohrer got the draft call from Cowboys player personnel guru Gil Brandt, he was studying for a final — He thought the call was a prank by friends.