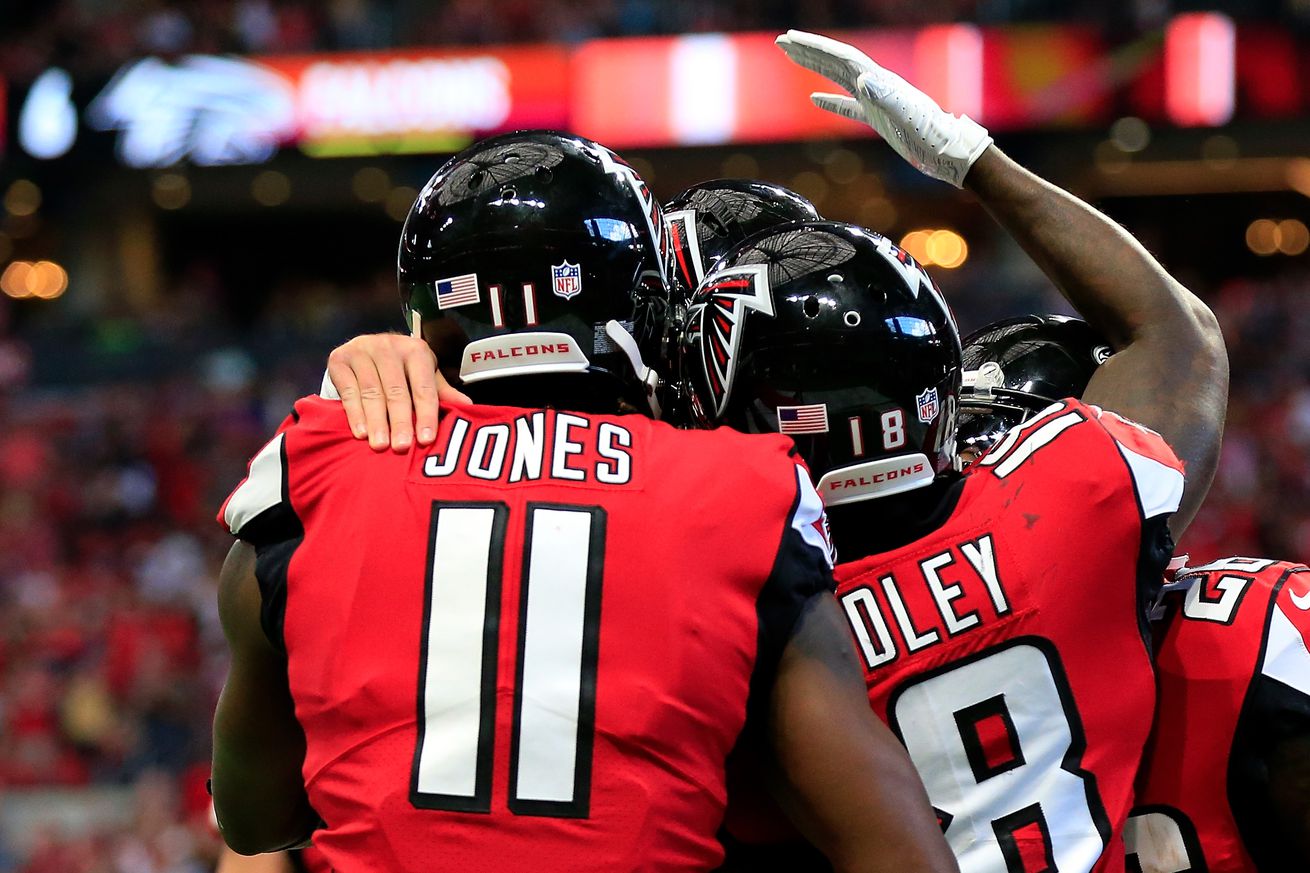 Here are five things to keep an eye out for when the Cowboys head to Atlanta.

The Dallas Cowboys head to Atlanta hoping to put together their first winning streak of the season. After a nice road win against the Eagles last Sunday night, the Cowboys are still right in the thick of things, but they to beat the Falcons if they want to keep that momentum going.

Like the Cowboys, Atlanta is sitting with a 4-5 record, only they have a slim-to-no-chance of catching the New Orleans Saints in the NFC South so they desperately need a win to stay in wild card contention. The Falcons have made the playoffs in each of the last two seasons, including a Super Bowl appearance in 2016. Like Dallas, they can’t make up their mind if they are a good team or a bad team. A couple weeks ago, they traveled to Washington and blew out the Redskins, 38-14. Then, last week, they lost to the Cleveland Browns 28-16. But unlike Dallas, this team is streaky. They’ve had a three-game losing skid earlier in the season, but then followed it up with a three-game winning streak. Let’s hope last week started another losing streak.

With some playmakers on both sides of the ball, there’s going to be a lot things to keep us busy. Here are five things to watch when the Cowboys travel to Atlanta on Sunday.

This game will feature three of the best wide receivers to ever come out of Alabama. Many thought the Cowboys might select Calvin Ridley with their first-round pick this year, but they opted to draft Leighton Vander Esch instead (no complaints). But the Cowboys managed to get a young Alabama receiver after all when they traded for Amari Cooper.

Julio Jones is the only receiver in the league who has eclipsed the 1,000 yard mark as he’s currently sitting at 1,040 yards receiving. He hasn’t been making as much noise as other receivers in the league like Adam Thielen and Michael Thomas, but that’s because he’s only found the end zone twice this year. But make no mistake about it – Julio is still an elite WR.

The rookie Ridley isn’t anywhere close to 1,000 yards. In fact, he only has half of that as he’s caught 36 passes for 500 yards, but he’s found the end zone seven times this season – which matches both Thielen and Thomas. His targets may be far less than Julio or even fewer than tight end Austin Hooper, but he sure makes the most of them. He was believed to be the top college WR prospect coming out of the draft and so far – his numbers are supporting that. He’s first among rookie receivers in touchdowns, first-downs, passer rating, and explosive plays.

While the Falcons have two former stud Crimson Tide wide outs, the Cowboys now have one of their own. Amari Cooper has been solid these first two games, but this week could be his breakout game as the Falcons secondary just don’t have a lot pieces to effectively defend the pass. The Atlanta defense is giving up 294.4 passing yards per game, which is the third-most in the league. Cornerbacks Desmond Trufant, Robert Alford and Brian Poole have all struggled in coverage this season.

Cooper has already sparked the Cowboys offense, helping them move the chains and create more scoring opportunities. The sample size is small, but his impact to the offense is very noticeable.

The #Dallas #Cowboys have 27 red zone trips on the season, but 9 of those have come in the last two weeks with Amari Cooper. That’s 18 in 7 games and 9 in the lat 2 games.

Everyone knows what kind of mess it was last year when these teams squared off. The pass protection was so bad for Dallas, that it sent Dak Prescott into a different dimension. Falcons edge rusher Adrian Clayborn worked over former Cowboys swing tackle Chaz Green in what ended up being the beginning of the end for the tackle from Florida.

Both Clayborn (New England) and Green (New Orleans) are gone so we shouldn’t see a repeat of that disaster. Instead, the Falcons will feature second-year pass rusher Takk McKinley who leads the team in sacks with six. He’s already matched his rookie sack total from last season despite being only half way through the year. Along with Takk, the Falcons recently signed Bruce Irvin to a one-year deal. Irvin is just the latest Raiders player who has been sent packing under Jon Gruden’s high-risk remodeling plan for the eventual Las Vegas Raiders team. A former Super Bowl champ with the Seattle Seahawks, Irvin had been solid for the Raiders, compiling 18 sacks in two and half seasons.

Regardless of who the Falcons send at the quarterback, they’ll have to deal with All-Pro left tackle Tyron Smith. Although Smith has had his struggles at times this year, he’s been playing well recently and is coming off one of his best games of the year. He currently has gone 91 straight pass blocks without allowing a pressure, the longest active streak for left tackles.

Smith is currently dealing with some back spasms, but it shouldn’t prevent him from playing on Sunday. Should he go down for any reason, the Cowboys signed swing tackle Cameron Fleming to a one-year, $2.5 million as insurance, but let’s hope they don’t have to use him.

If you’ve ever gone by the name of Mike Honcho or Saul Goodman, then you know the importance of having a good identity. The Cowboys had a good one once, but it seems to have gone missing.

Jason Garrett loves to tell the media that the Cowboys offense wants to beat their opponents in different ways, whether it’s on the ground or through the air. But make no mistake about it, the Cowboys are at their best when they wear defenses down with clock-chewing drives and a heavy dose of Ezekiel Elliott. Not only does it take pressure off of Prescott, but it keeps the defense refreshed and full of energy, which was on full display against the Eagles on Sunday night.

The Cowboys ground game has had some problems this season and this has resulted in some pretty low yardage outputs for Ezekiel Elliott. In fact, five of his seven worst games have occurred this year. That’s why it came as a bit of a surprise when Zeke put up 151 yards against the Philadelphia Eagles who have the second-ranked run defense in the league.

When it’s been bad for Dallas, it’s been really bad, but this team has been able to light it up on the ground when the blocking has been there. Zeke has only had four games where he’s rushed for over 150 yards, but two of them have happened this season. Sometimes it’s there, sometimes it’s not, but it was definitely there against the Eagles. In fact, according to Pro Football Focus, the Cowboys offensive line made a big jump in the rankings.

Did the switch to Xavier Su’a-Filo over Conner Williams at left guard make such a big difference? Or are we witnessing the effects of new coaching leadership in Marc Colombo and Hudson Houck? It could be both those things, but one this is for sure – if you can give Elliott a little room to run, he’ll do the rest.

Whether he blows by you, goes through you, or (as Eagles DB Tre Sullivan learned) jumps over you – Zeke will find a way.

The Cowboys defense was absolutely horrible on third down against the Tennessee Titans, allowing them to convert 11 times on 14 attempts. That’s not going to win football games. The defense made a big improvement last week as they kept the the Eagles to just 4 for 11 on third down. How they played on third down went a long way in determining the outcome of those games.

This week should be no different as the Cowboys now get one of the best third-down offenses in the league. Atlanta converts their third downs 51.2% of the time, which is ranked second in the NFL. The Cowboys defense is near the bottom at stopping teams on third down as they surrender a first down 44% of the time, ranking them 29th in the league.

On the surface, it doesn’t look good for Dallas, but that was the same feeling many of us had last week going against an Eagles offense that led the league in time of possession. The Cowboys defense swarmed all over the field and limited the Eagle’s chances by making stops. They’ll need a similar performance if they are to stop the Falcons on Sunday.

5. A win is long overdue

As rookies in 2016, Dak and Zeke helped the Cowboys do something they’d never done before – beat the Baltimore Ravens. That’s right, their 27-17 victory over Baltimore was their first ever victory over the Ravens. What a long time coming.

Speaking of long time coming, it’s been over a decade since the Cowboys have won a game against the Atlanta Falcons. The last time they won, they had this guy dancing around at quarterback.

It’s the longest current drought the Cowboys have against any NFC team and it sure would be nice to end it.

What will you be watching for on Sunday?