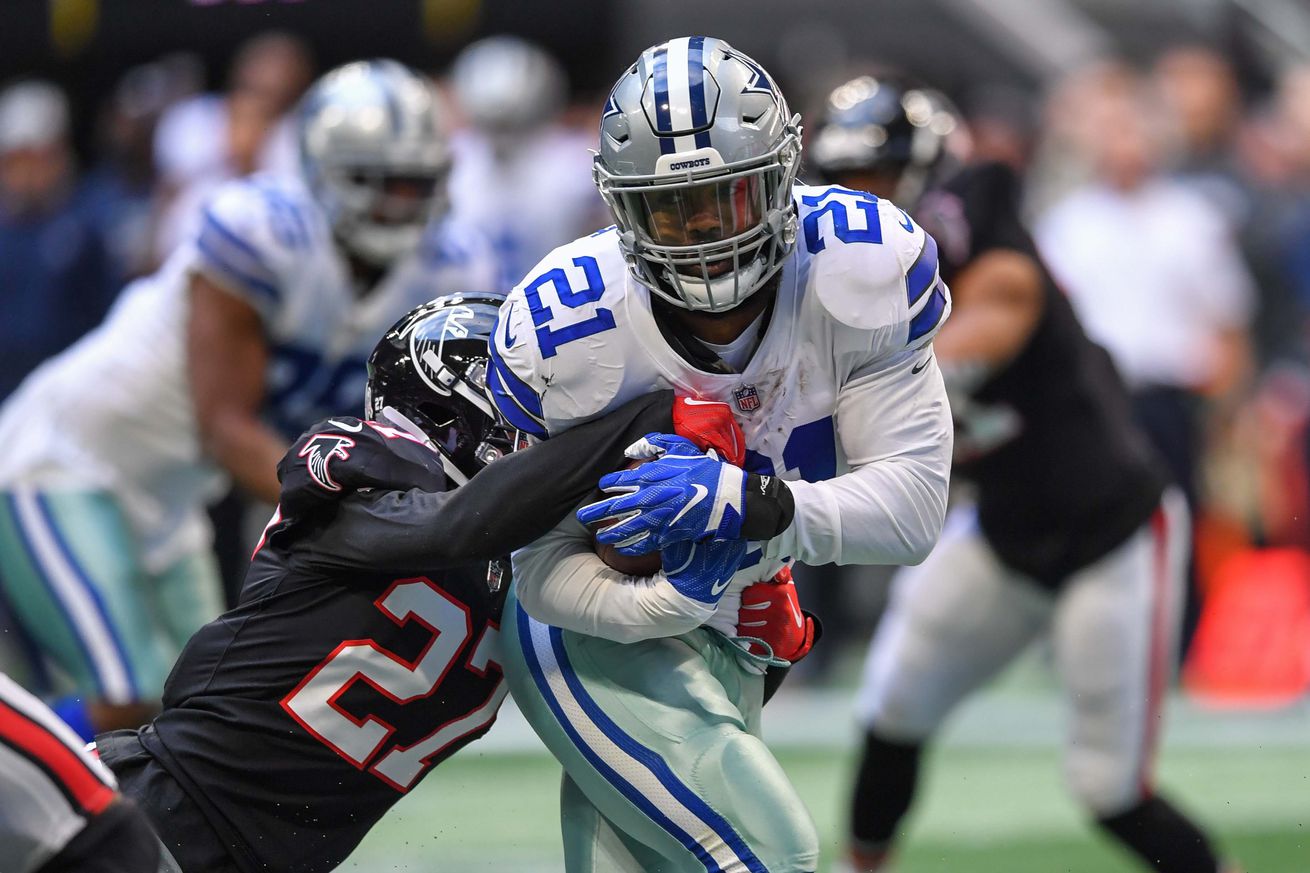 A lot of the numbers were as close as the score in the win over the Falcons, but some have hidden import.

In a game like the 22-19 win by the Dallas Cowboys over the Atlanta Falcons, you’d expect some numbers to be very similar for the two teams when you scrutinize the stats. That was true in many respects. And there are some other things that are telling as the Cowboys are off to a great start in their run to make the NFL playoffs after the dismaying 3-5 first half of the season. Let’s take a look.

That is the success rate on third down (7 of 13) for Dallas in the game, and if I had to pick the most significant stat, that would be it. After struggling so much to convert them in the losses earlier, this is an extremely encouraging result. The NFL average hovers around 40%, and only two teams in the league (the Indianapolis Colts and, lookee here, the Falcons) have averaged over 50% this season.

This is no proof that the Cowboys can sustain that rate – but they also were at 50% in the win over the slumping-in-record-setting-levels-for-a-defending-Super-Bowl-winner Philadelphia Eagles. Even in the frustrating loss to the Tennessee Titans, they managed 45%. And if you really want to consider how much of an improvement they have had, Dallas is averaging 37.4% on the season, even with those last three games factored in. That gives you an idea of the magnitude of their suckitude in the first seven games.

That is significant, because the Titans game, of course, marked the debut of Amari Cooper wearing the Star and the advent of Marc Colombo (feat. Hudson Houck) as offensive line coach. Those were two moves made with the express intent of saving the season.

If that third down trend continues in Dallas, the final six games of the season are going to be very entertaining.

One reason that conversion percentage was so good was that the offense did an excellent job of staying out of third and long for most of the game. The average yards to go (including the two offensive plays that did not count due to penalties) was 5.6. And they only had two third downs all game that were longer than ten yards. More importantly, nine of the third downs were third-and-five or less – including four third-and-one plays that were all converted.

That means that they had a very high success rate on first and second downs. Some of that was due to the Falcons’ defense not being very good, but as mentioned, the trend overall is definitely positive.

La’el Collins has gotten a lot of criticism this season, especially prior to the move away from Paul Alexander. But he may have saved the game and perhaps the season when he alertly recovered Ezekiel Elliott’s fumble on one of those third-and-ones, and then alertly dove forward to get the ball over the first down line. That kept the drive that resulted in the first touchdown of the game alive. If Collins had not bailed Zeke out on that one, things could well have gone very differently.

Those are defensive stats for Atlanta against the Cowboys, and there is no better indication of just how big a difference there was between this game and the now-infamous Burning of Atlanta last season. In that game, the Falcons inflicted the well-known eight sacks, plus hit Dak Prescott nine more times, and also throttled the rushing game (sans Elliott due to suspension) with nine tackles for a loss.

Again, the Falcons’ defense is not very good this year, and certainly not up to how that group performed last year (including All-Pro-for-a-Day Adrian Clayborn), but this game is still testimony to just how big a step the offensive line has taken – and with two backups in Joe Looney and Xavier Su’a-Filo playing. When you can handle the line of scrimmage without 40% of the players you projected to be starting coming into the season, you deserve all the credit.

With that help from La’el, the Cowboys did not give the ball away to the Falcons, and of course benefited greatly from the alert interception by Leighton Vander Esch. Winning the turnover margin is always a big indicator of who will eventually win an NFL game. And now Dallas has started getting more takeaways as well as protecting the ball. Put those two together, and good things happen.

Coming out ahead in the sack totals is another indicator of who is likely to come out on top, and Dallas won that battle, too. That was despite being sorely depleted on the defensive line, forcing the team to go with only seven defensive linemen, including just-promoted Christian Ringo. Rod Marinelli prefers to use a lot of rotation for his defensive line, but the injury situation forced Demarcus Lawrence to play 84% of the snaps – which he did very well, thank you, notching 1.5 sacks and three quarterback hits, and five total tackles. Maliek Collins, Tyrone Crawford, and Caraun Reid were the other workhorses, and Randy Gregory also took 61% of the snaps, adding his own sack. That was an outstanding effort from a banged-up line.

Yeah, that’s what I’m calling Vander Esch, and you can’t stop me. All he did was get the interception that set up the second Cowboys touchdown, make eight tackles (according to the NFL’s stats; the Cowboys do their own count and credit him with more), and defend a total of three passes. And one of those PBUs, the ball he knocked away from Austin Hooper at the one-yard line, forcing the Falcons to settle for three, was as big a play as any for a defense that was making a bunch.

It is just one more excellent performance for a rookie who is not only tied for fifth in tackles league-wide, but has done so while playing most games as Sean Lee’s backup. LVE has really come into his own since being tasked to fill in for the injured Lee, however. He is making a case not only for DROY, but All Pro as well.

The Falcons came into this game averaging 32.2 points per game at home. With Matt Ryan and his bevy of receivers, they are a hard offense to even slow down. That is exactly what the Cowboys defense did. They repeatedly came up with big stops to force Atlanta to settle for field goal attempts instead of touchdowns, or to punt instead of trying for three. That kept the game close until the Dallas offense finally got things going late in the third quarter.

Prescott has taken more than his share of heat over his performance since that last game in Atlanta. Winning with defense is retro, but that is what the Cowboys are now doing. And it is not exactly a last century kind of thing, as Joe Flacco and Eli Manning have both won rings with a lot of help from their defenses in the not-too-distant-past.

Oddly, one thing that does not seem at all likely for Prescott is to have his fan base making fervent arguments about how elite he is. Flacco and Manning both have their fiercely loyal supporters, despite the plentiful evidence against that idea. They are both QBs who can go on a streak (like Manning did in the New York Giants’ win on Sunday), but who haven’t sustained it.

If the Cowboys can keep their defense and running game strong, they don’t need Prescott to be doing Tom Brady or Drew Brees impressions out there. They just need efficiency and protecting the ball. Which is what he is doing right now.

Just one more thing the Cowboys defense managed. And on that single appearance inside the Dallas 20, the Falcons left with just three points.

Yeah, you have already seen how well Zeke did in the game. But you can’t talk about the stats here without a nod to the player who had the ball in his hands for 62.2% of the total offensive output. The man is a true beast, and maybe Scott Linehan has finally remembered how to use him to the best effect.

While we are mentioning Elliott, consider how he allows the Cowboys to have that rarity in today’s pass-happy league, offensive balance. This is also shown in the yardage totals, with 132 on the ground and 191 (net) through the air. It is another old-fashioned approach Dallas is taking, but at the moment, it certainly is working.

That in and of itself is big, and the second game in a row that they have cut down on those kinds of mistakes, especially on the offensive line. Despite the really bone-headed play by Lance Lenoir.

And the big one: .500 with six games to go, and Washington coming up

Win on Thanksgiving, and Dallas is tied for the best record in the NFC East with the tie-breaker over their opponent.