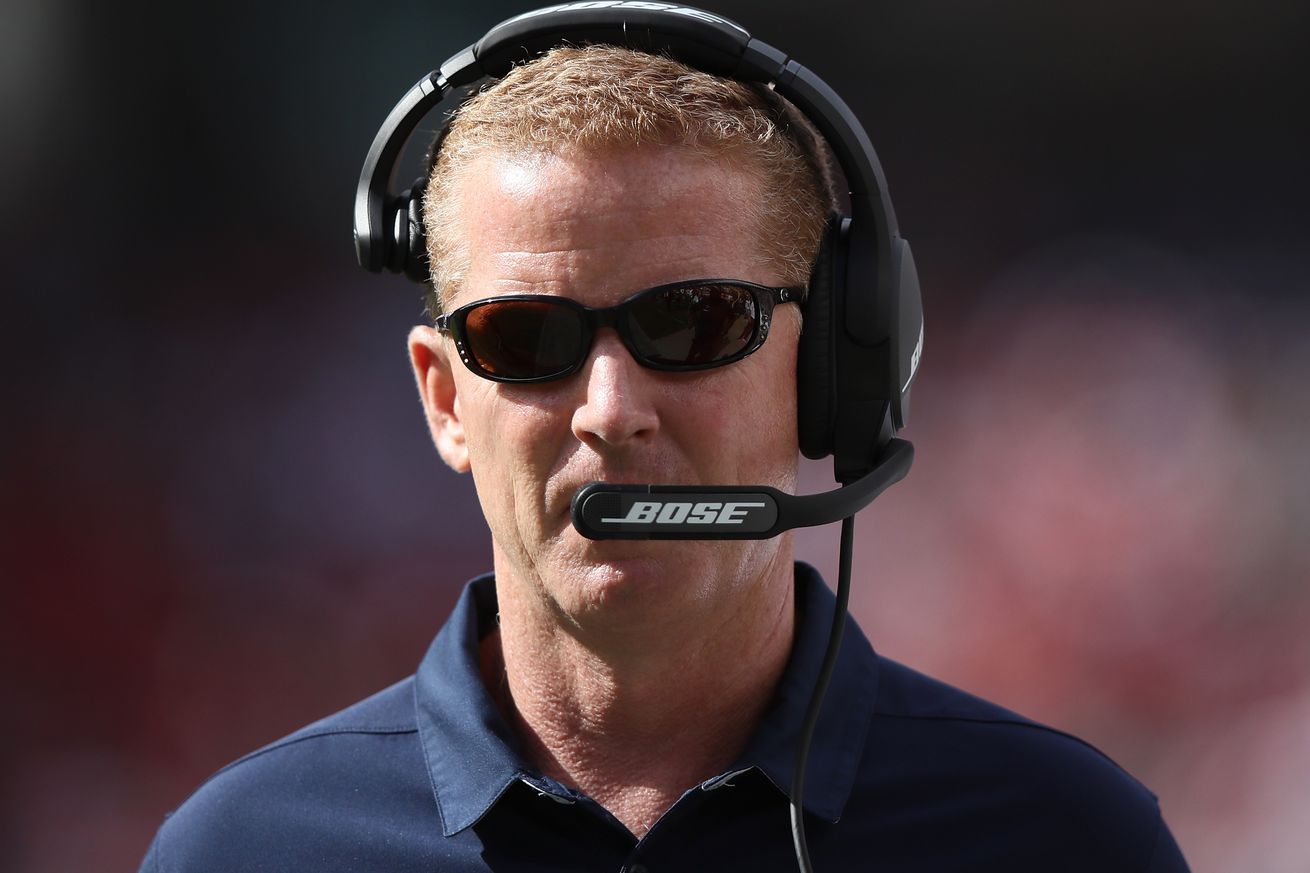 The heat was way up on Jason Garrett’s seat, but a winning streak has cooled things down.

After the Dallas Cowboys lost at home to the Tennessee Titans, many fans had finally had enough with Jason Garrett. Whether it’s his conservative nature toward the ends of games, challenge flag gaffes, or the propensity to stick things out way too long – Garrett’s Cowboys weren’t winning football games. And with a 3-5 record at the midway point, it looked as if the wheels were coming off the Cowboys 2018 season. Water cooler discussions included a plentiful array of names circulating around as potential replacement candidates for Garrett. Buzz even spread regarding Jerry Jones “affinity” for Oklahoma head coach Lincoln Riley, which had some wondering if the end was truly near for the Cowboys second-longest tenured head coach.

Three games have passed and the “Fire Garrett” chants have subsided. Just as losing draws them out, winning will cause them to vanish – at least for a while. And that’s exactly what the Cowboys have done. Win. The Cowboys went into Lincoln Financial Field to face the defending champion Philadelphia Eagles in a battle that determined which team still has something to play for and which team has some serious soul-searching to do. With the odds stacked against them, the Cowboys emerged victorious and their 2018 season was still alive.

The very next week, the Cowboys again went on the road and again faced a crucial game. This time it was against the Atlanta Falcons – a team they had not beaten since 2009, a team that sent them into a losing skid last year when they learned they were not equipped to win without All-Pro left tackle, Tyron Smith. But things were different this time around. The Cowboys won the game and continued breathing, while the Falcons playoff hopes are on life support.

And this past Thursday, the Cowboys continued to show that they are still fighting with a win over the Washington Redskins. Tyron Smith did not play in that game, yet the Cowboys offensive line didn’t miss a beat. With three offensive line reserves, Dak Prescott, Ezekiel Elliott, and Amari Cooper all shined, putting up over 400 yards of offense against a good Redskins defense. Sean Lee did not play in that game, yet the defense carried on. The Cowboys D forced a season-high three turnovers.

A team that couldn’t win back-to-back games throughout the first half of the season has suddenly strung together three straight victories. They are now atop the NFC East and are favorites to win the division. Yet all this is happening with the same head coach doing Jason Garrett-things.

When the team doesn’t perform, it’s understandable that people are upset. And for years with Garrett at the helm, the Cowboys have not lived up to expectations. Sure, he only has one losing season on his entire head coaching career, but he also only has one playoff victory during this time. That’s going to make the natives restless.

And what makes it worse is that through adversity, Garrett can be seen with a stoic expression on his face, as if he’s completely detached from the misery we are all experiencing. Does he not get it? Why isn’t he jumping all over his players who are screwing up? Instead, he’s seen chewing away at his gum, clapping excessively, and patting his guys on the shoulder as if to say, “hey, you did your best, we’ll get’em next time.” How infuriating.

Except that’s not how it’s going down at all. For starters, Garrett has emotion; a lot of it. Garrett just doesn’t scold his players after they mess up. They know they messed up. Instead, he keeps positive energy flowing and gets them to focus up – the single most important thing they need to do at that given point in time. That’s why this team is so good at responding through adversity. How many times has it felt like the team has given a game away, only to come back with some fight? We’re all disappointed with that loss in Washington a month ago, but did you even expect to have a shot in that game after Dak Prescott fumbled the ball in the end zone for a Redskins touchdown and trailed by a two-score deficit in the fourth quarter? Or how about the Eagles game where all of sudden Philadelphia’s offense scored touchdowns on two straight possessions. It looked as if the worm had turned and Philly had all the momentum, but what did the Cowboys do? They kept fighting. The offense kept scoring and the defense made stops. And let’s not forget when Julio Jones scored Atlanta’s first touchdown of the game with under two minutes left to play in the game. We started sensing they were going to let the game slip away. But it didn’t. A very focused Cowboys team marched down and kicked the game-winning field goal.

Dak Prescott is one of the best quarterbacks in terms of fourth-quarter comebacks since he came in the league. You know who else was good at fourth-quarter comebacks? Tony Romo. Both those guys deserve a lot of credit for showing up big when it counts, but it’s also a testament to the team as a whole. The Cowboys always fight under Garrett.

Jerry Jones continues to express his support for his head coach, even if people think it’s just lip service. Jones wants to win football games. How can he have so much patience with this guy when the team has disappointed so much throughout the years? I can only attempt to answer this question with the same answer as to why I love Garrett – he believes he possesses the right traits to lead the Cowboys to a championship. And what are those traits, exactly?

Garrett is a highly intelligent person and those around him know immediately that this guy’s knowledge of the game is impressive. Coaches around the league will talk about it, praising him for how he sees the game. That’s why Nick Saban spoke so highly of him and hired him as his quarterbacks coach in Miami even when he had no desire to take a guy who had no coaching experience whatsoever. Just a few minutes talking to him was all he need to realize that Garrett was his guy.

Garrett is a great motivator. He inspires others to be their best. He allows them to be themselves, play with passion, and understands that people are fallible. If you’ve ever seen that successful people/unsuccessful people poster, the successful side is laced with Garrett attributes. For example, he constantly praises people. He’s continuously learning, exposing his guys to more culture. He has a great sense of gratitude and always speaks how much of a privilege it is to play for the Dallas Cowboys. He never complains about the officiating or puts down his opponents. And he’s constantly doing things to get better, whether it be a complete makeover of the roster or coaching changes.

And Garrett goes about things the right way. Look up and down this roster and you will find so many high-character guys. People wonder how it is that the Cowboys land so many talented first-rounders through the Garrett years. It’s not luck. The Cowboys don’t have magic scouts. And in some cases, they aren’t even selecting the best guys, but it’s working because they have a formula they stick by – the right kind of guy. That may be cliché, but when they choose players who have the ability to max out their potential, the chances of them being successful increases dramatically. How much do these guys love winning? Do they inspire others to be their best? Look at Ezekiel Elliott for example. A year ago, you may have felt like he’s going to be a headache for his team. But now he’s regarded as one of the biggest leaders on the team. It’s Zeke, not Jalen Ramsey who is wearing the star and we have Garrett to thank for that.

Garrett, on Monday, closed his office door and spent seven hours looking at every snap of Ramsey at Florida State in 2015, and every snap of Elliott at Ohio State in 2016. He liked Ramsey. He loved Elliott. Garrett told the Joneses he favored Elliott. So the group was solid as the clock ran down here for pick number four of the first round of the 2016 draft.

RKG doesn’t mean boy scout. People are fallible. But you have to have the passion, the drive, the relentless spirit to “try hard longer” to be a Garrett-guy.

A month ago, the Cowboys did something they hadn’t done in a long time. They traded precious draft capital to get a receiver they so desperately needed. The move brought back memories of past trade blunders involving Roy Williams and Joey Galloway. But Amari Cooper was different. Cooper is talented player whose fluid movement and great route-running ability would be welcomed by any team, but he also brings with him a quiet demeanor that comes across uninterested. He’s a competitive player, but didn’t go on a tirade when they weren’t throwing him the ball in Oakland.

Cooper laughed when he was told he didn’t look frustrated when he didn’t get ball Sunday. “That’s just me.” Not a lot of visible emotion

Did his passive character help wear out his welcome in Oakland? Is he just not all that interested in playing football? Maybe that’s what the Raiders front office suspected, but Garrett did his homework and some of that homework included talking to his good friend Saban, Cooper’s former coach at Alabama. And it was Cooper’s attitude and personality that sold the team.

In 2016, Jerry Jones won Executive of the Year.

And he’s at it again…

It’s hard to look past the results when in the end, it’s the results that makes the headlines, but that’s exactly what’s needed to determine what’s best going forward. And if you do, you’ll find a team that has improved their defense significantly, strengthened their depth along the offensive line, but most importantly – contains a roster full of players that love to fight for their coach. After the Redskins game, Garrett got choked up when talking about spending time with your family (this is his first Thanksgiving without his dad). Watching the players embrace Garrett and to see how much they care for their coach was very touching. Say what you want about Garrett, but his players love their head coach.

“So much to be thankful for.”

Watch the #DallasCowboys post game speech as Jason Garrett presents WR @michael13gallup with the game ball and addresses the team with an emotional Thanksgiving message. pic.twitter.com/a9sVnpA3YY

There is still a lot of work to be done for this team to become something special. Winning football games in the NFL is hard, so more bumps are coming. But this team is making strides and they’re still such a young group. When I think about the type of person I want leading the charge, for me – it’s always been Jason Garrett. It’s going to take a Lombardi Trophy for everyone to see that Garrett is the right coach for America’s Team, but I can’t wait for that day to finally arrive. Because it’s coming.