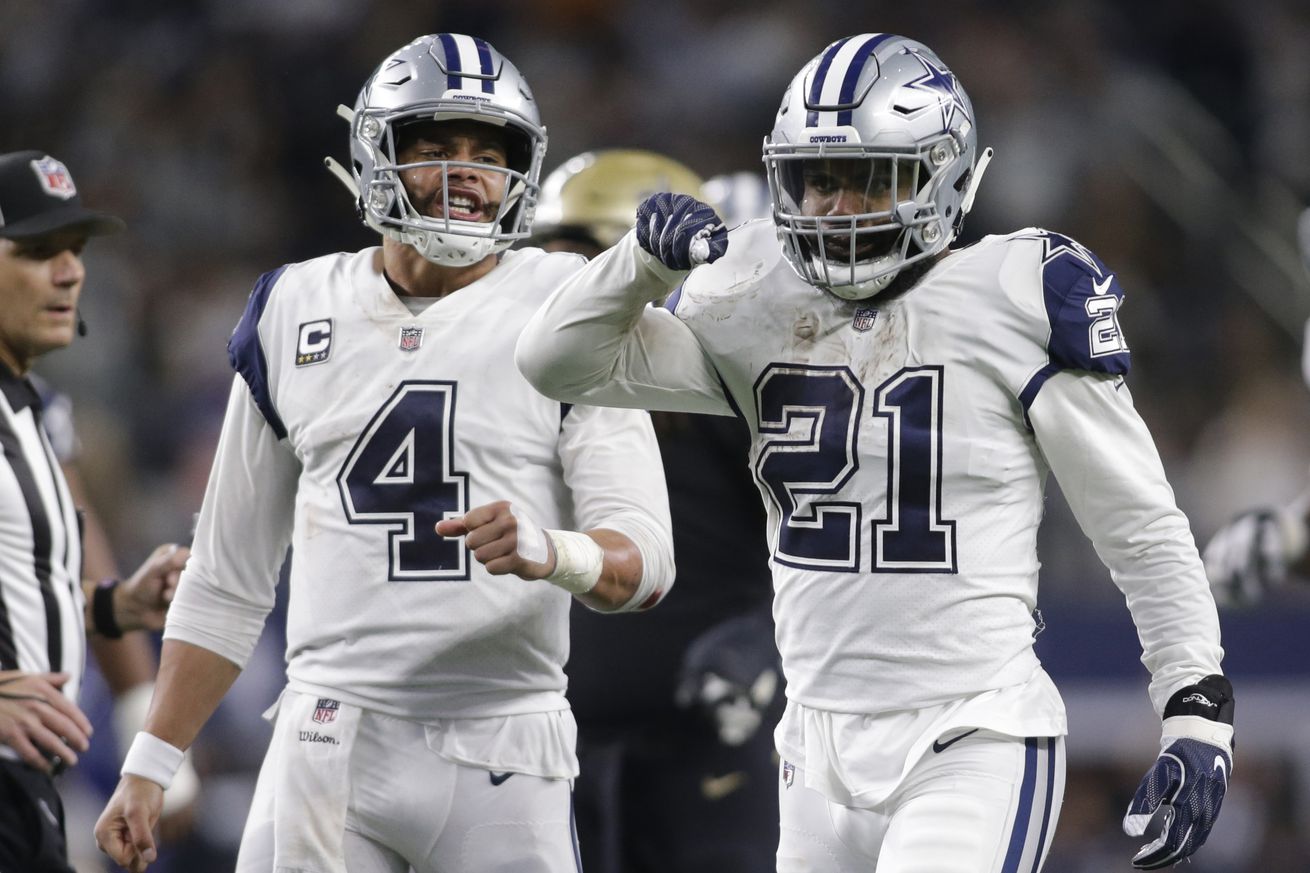 Dallas has won four in a row and are leading the NFC East.

The Dallas Cowboys really held the New Orleans Saints to 10 points in four full quarters of football. It’s going to be hard to believe for some time.

Every season typically has what people refer to as a “statement win.” In recent history you can look to Seattle in 2014 or Pittsburgh in 2016. Whatever comes of the 2018 season for America’s Team, it’ll be hard to find a bigger statement than taking down the Saints.

It was a night that the whole world saw. The stage was bright and the Cowboys delivered in heroic fashion. Here are our winners and losers from it all.

Things looked grim after Dak Prescott fumbled the ball late in the game when the Cowboys were trying to put it away. Giving New Orleans the ball back with only a three-point lead felt dicey at best. Thankfully, Jourdan Lewis stepped in and had the play of the season.

Jourdan Lewis is fired up pic.twitter.com/5kF5q5lVdv

Much has been said and debated about Lewis’ playing time over what feels like forever, but he was definitely in at the right moment. We’ve seen the Cowboys use him on offense but there’s no question that he’s a defensive player through and through.

The Cowboys have quite the linebacker pair, quite the duo in general, in LVE and Jaylon. What the two are doing defensively for Dallas hasn’t been seen in some time. Remember when we used to talk about seeing Rolando McClain with Sean Lee? We’ve waited for this!

This is the greatest gif of all time pic.twitter.com/enIaTVaRQL

The future looks bright in the middle of the defense.

Winner: DeMarcus Lawrence, Tank, everything about him

There were definitely doubts as to whether or not Lawrence could build off of his performance last season, but goodness gracious is he ever doing it.

Tank had some words about this game and he cashed all of the checks he wrote. He was a huge force off the edge for the Cowboys and managed to keep that intensity up all game long. The defense held New Orleans to 176 yards for crying out loud!

Amari Cooper joining the Cowboys has definitely helped the cause, but Michael Gallup is blossoming into something special. He led the team in receiving with 76 yards (Cooper had 75) and was constantly making play after play.

Odds are you’re aware of what Gallup has been dealing with off the field for a few weeks now, what he’s going through is hard to imagine. He has become a darling for the Cowboys offense and had Dak Prescott not barely missed him he would have scored the potential game-winning touchdown.

Winner: Cowboys History and respect for it

Thursday was a special night at AT&T Satdium.

Before the game the 1993 team that won Super Bowl XXVIII was honored, including BTB’s own Tony Casillas, and at halftime Gil Brandt was celebrated for entering the team’s Ring of Honor.

This is the time of year where wins are so important, but it’s also the holiday season, we saw that with Thanksgiving last week. Jaylon Smith wore a Chuck Howley jersey on Turkey Day as an ode to one of the franchise’s greatest legends whom he happens to share a jersey number with. I asked Jaylon about his admiration for the team’s rich tradition and he’s very proud to be a part of it all.

Jaylon Smith on his love for Cowboys History and if it was special for the team to have the night they did with @Gil_Brandt going into the Ring of Honor and the 1993 team being honored for winning Super Bowl XXVIII. pic.twitter.com/7KkzwC0g68

It was a night to forget for Randy Gregory, unfortunately for more than one reason.

On a Saints punt after an impressive Cowboys stop, Gregory bowled over the punter. You can’t do that. He kept the drive alive (Byron Jones also did earlier, to be fair) and New Orleans got their first (and surprisingly only) touchdown of the night. That’s not good.

Not long after that Randy Gregory was called for being offsides on what would have been a Dallas fumble recovery, although to be fair he didn’t look totally offsides.

Randy Gregory called for lining up in the neutral zone

Nobody wants to be the “man the officials suck” guy, but it’s hard not to come away from Thursday’s game without being upset with the officiating. There were bad and missed calls both for New Orleans and Dallas, this simply shouldn’t happen at this level of sport.

This play against Jaylon was not called, thankfully for the Cowboys sake, but it should have been. Smith talked about being physical after the game and that is how he plays, but by the way the league has defined these rules things were seriously inconsistent.

The Cowboys won this game and nobody is going to be upset about that, but as football fans we don’t want to see such important contests ruined or contaminated by sketchy calls. Be better, NFL.

Let’s be clear… we’re not calling Cole himself a loser, only his utilization.

Cole Beasley has three catches for 14 yards in the last two games/wins for the Cowboys. A lot of this is due to the emergence of Amari Cooper and the aforementioned Michael Gallup, but he’s such an elite weapon that it’s hard to justify not getting him more involved.

We miss you, Cole. But we also are happy that we’re winning. This is awkward.

There are plenty of folks who have sung the La’el Collins back to guard song, I’m not one of them, but Cameron Jordan certainly isn’t one of them. He likes Collins at tackle. He likes it a lot.

Questionable playcalling down the stretch.

On the Dak Prescott fumble that gave New Orleans life Collins got destroyed by Jordan, he was even called for holding on the play but it didn’t matter. The Cowboys were missing Tyron Smith and that’s undoubtedly a hurdle that has to be overcome, but they can’t be that bad at a spot where they have a normal starter.

It’s hard not to be grateful after the Cowboys vanquished the Saints, and let’s be clear that this isn’t the case here. The Cowboys won, but they also only scored 13 points. That won’t be enough on a week-to-week basis or in the playoffs.

Dallas produced only one touchdown on the night, and amazingly it was enough in this particular game. They have to find a way to capitalize on three-and-outs, turnovers, and when they’re in the redzone. The defense is giving them such incredible opportunities and they’re not exactly cashing in. It needs to be done. It’s area for improvement.

All in all the Cowboys are 7-5, in first place in the NFC East, and have close to a week and a half to sit on this win before the Eagles visit AT&T Stadium next Sunday. These are the wins that make a season worth experiencing, the games we ache for in the long days of June.