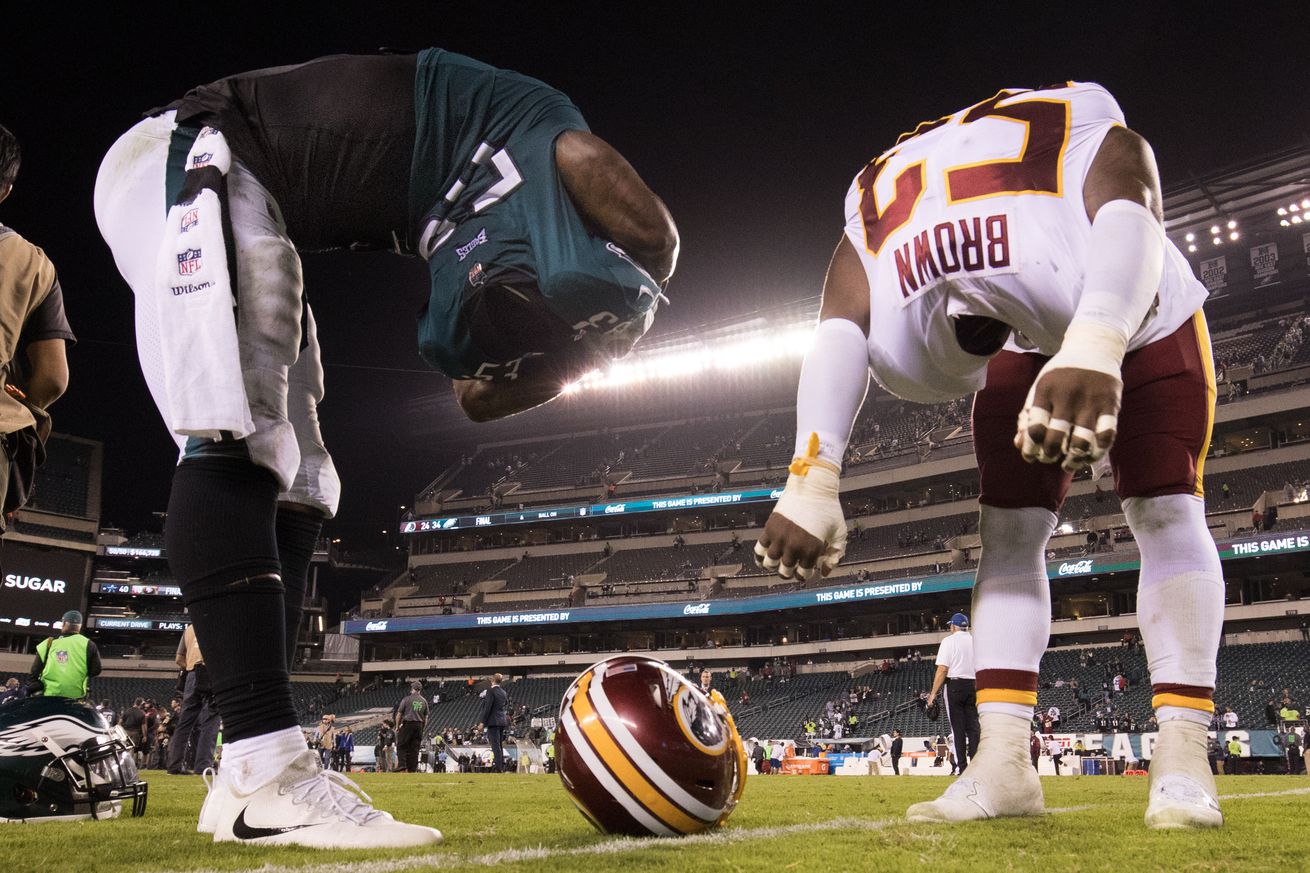 The Dallas Cowboys have already played their Week 13 game, they won against the previously 10-1 New Orleans Saints in case you forgot. It was amazing. But the show must go on and the rest of the league has yet to play including Monday night’s game between the Washington Redskins and Philadelphia Eagles.

As things currently stand the Cowboys have a lead with a little breathing room in the NFC East, but things are a little dicey behind them. This is why Monday night’s game is important as how it goes will influence the rest of the season and division race.

The G-Men have taken themselves out of this conversation and will be spending their holiday season watching from the kid’s table. Dallas obviously has the inside track to the division crown, but whoever wins on Monday night has a snowball’s chance. The question now becomes… who do you hope wins?

The logic behind rooting for Philadelphia

There are undoubtedly many of you who are immediately screaming internally that you can never root for the Eagles, so just consider this rooting against the Redskins. Whatever helps you sleep at night. The reality here is that someone has to win and someone has to lose so we might as well try to benefit from it by getting on the same page.

It makes mathematical sense to root for the Eagles if we’re being honest. They have one less win than the Redskins so a Philadelphia victory allows no team to match the Cowboys current win total. That’s certainly preferable.

Philadelphia also has the far more difficult schedule remaining of the NFC East foes. After this game on Monday night they visit Dallas (another point is that the Cowboys still can influence Philly), visit Los Angeles, host Houston, and visit Washington to end the season.

I’m rooting against Washington (rather than for the Eagles, because, Eagles) to give the Cowboys that one game lead over both. That would put Dallas even more firmly in the driver’s seat for the NFC East, with a chance to push it to two over Philly next game, while Washington looks like it will probably find a way to lose at least one more game with their injury issues. Most importantly, the Cowboys look to be hot and extremely confident, with the defense playing lights out and the offense able to be more productive if they can just clear up a few things, and especially if Tyron Smith makes it back into the lineup. Win out, and nothing else matters, of course, but a little insurance never hurts.

The logic behind for Washington

If your mind is made up on wanting the Redskins to lose more than the Eagles, hey that’s up to you; however, there is definitely logic to support preferring a Washington win. It’s this writer’s preferred option if you care.

Washington’s schedule is easier, nobody denies that. After visiting Philly they host the Giants, visit the Jaguars, travel to Tennessee, and host the Eagles in the regular season finale. That’s unquestionably an easier road than Philadelphia’s… but the car they’re traveling in is of a lower quality. That’s important.

The Redskins have had a long time to sit on their loss to the Cowboys (these really are such fun sentences to type) and Colt McCoy will likely be more prepared for his second game this season than he was on Thanksgiving Day. That doesn’t change that he’s still Colt McCoy.

If you asked me which team I’m more concerned about for the Cowboys sake, it’s the Eagles not the Redskins. Philadelphia is a better overall team and for me the priority is eliminating them, even if that means keeping Washington step for step with Dallas through Week 13. That schedule of theirs definitely looks soft but there’s no way that the Redskins in their current form are capable of capitalizing on it in the way that our deepest fears and insecurities think.

What say you, BTB? Who do you hope wins/loses? What are you hoping is the situation surrounding the Cowboys when we wake up next Tuesday morning?