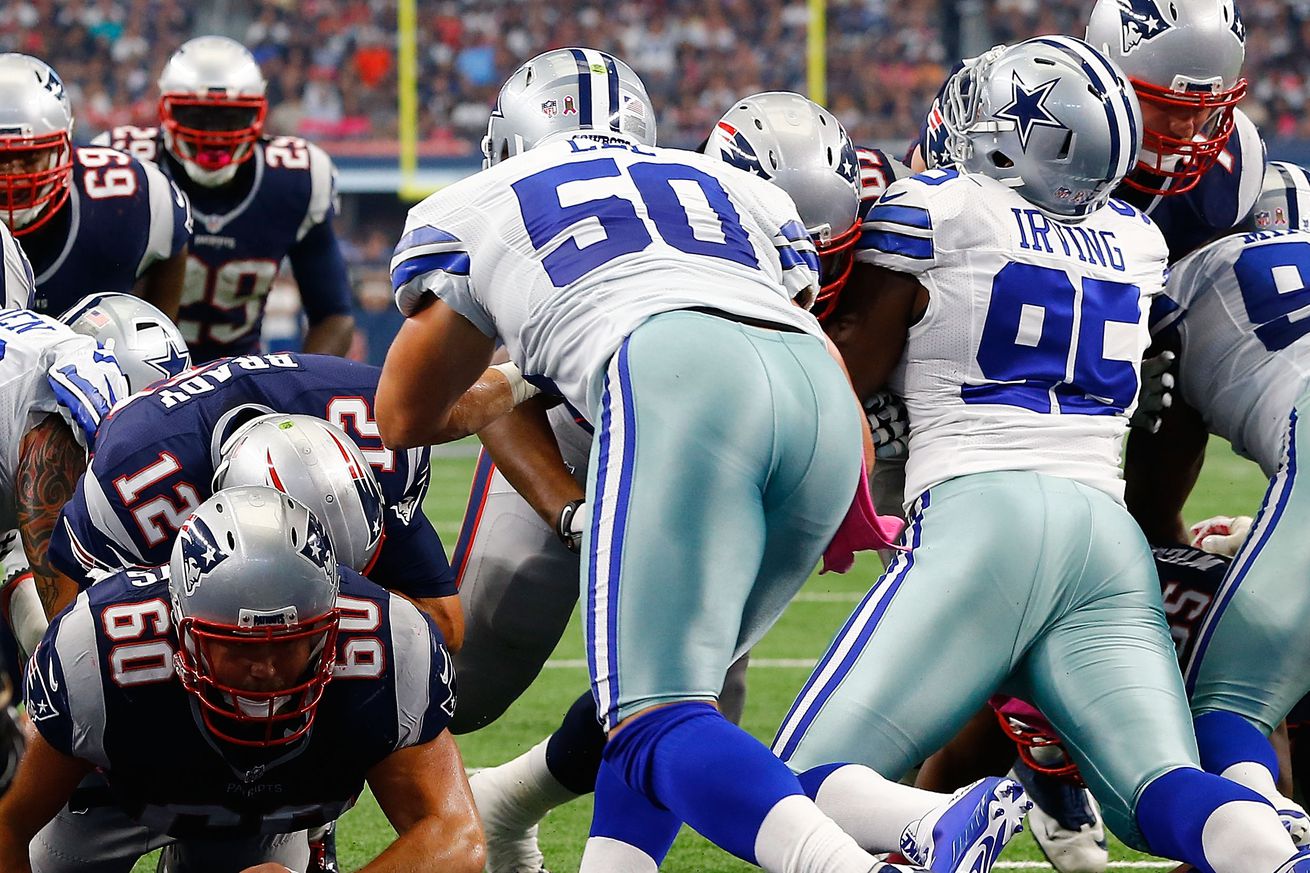 The Voice of REason: Rich Eisen on the Cowboys’ Defense Stifling the Saints’ Offense – Rich Eisen, YouTube
How ’bout them Cowboys!

And then you see the Dallas Cowboys using defense. Using a real, bona fide, coming-at-you, hard-hitting, hard-charging, front seven. The Hot Boyz up front, as they are referring to themselves, with guys who can plaster on the back end as well.

Saints film room: Take a closer look at what plagued offense against Cowboys – Nick Underhill, theadvocate.com
A look at the Cowboys defense from a Saints point of view.

Dallas’ coverage was suffocating at times. The Cowboys used primarily Cover 1 and Cover 3 looks, and made it hard for New Orleans to throw the ball down the field. Only one of Brees’ passes traveled 15 or more yards through the air. A stunning 21 of his attempts went 5 or fewer yards through the air, which accounts for 75 percent of his passes, his highest amount of the last three seasons.

Brees was under pressure more often than he has in most games this season. He attempted eight passes while under duress, connecting on five, and was sacked once. There were a couple of plays where more than one player pressured him.

Most of the pressure came from the right side of the line, where Ryan Ramczyk had an unusually tough time containing DeMarcus Lawrence. He surrendered five pressures, which is far more than what is typical from that side of the line. He had allowed less than 10 total this season entering action.

Why the New Orleans Saints Efficient Passing Game Faltered Against the Dallas Cowboys – Ian Riise, Last Word on Pro Football
Another look at how the Cowboys hurt the Saints.

Dallas played almost exclusively man coverage, which can be risky against an offense that capitalizes on mismatches. However, the Cowboys proved they had the size and speed on the back end to match up with the Saints versatile receiving corps. Cornerback Byron Jones, in particular, is one of the few cover men that have matched the excellent route running and physicality of Thomas this season.

Rookie linebacker Leighton Vander Esch spent much of the game matched up with Alvin Kamara and proved to be up to the challenge. He rarely let the elusive back get separation or slip away after the catch. Kamara gained just 3.8 yards per pass target against Dallas, his lowest figure since week three of last season.

Up-front, the Cowboys rarely rushed more than four defenders, but their pass rush strategy worked brilliantly. They managed to get consistent pressure up the middle using stunts and by mixing up the defensive tackles’ alignments. Pressure up the middle can be devastating for shorter quarterbacks like Brees, who often struggle to see downfield when there’s congestion up front.

This is why Brees struggled to find receivers crossing the field and downfield for much of the game. It could have also been why he didn’t see cornerback Jourdan Lewis lurking when he threw an interception on his final pass with a defensive tackle in his face.

Top 10: D-Law or Dak For Player of the Game? Nick Eatman, Dallas Cowboys
Who were the top players from the Saints game? The Mothership provides the 10 top performers, including the team’s leader of the defense.

DeMarcus Lawrence: He might’ve won the game two days before kickoff when he gave a detailed description how to beat the Saints. But on the field, he was dominant again. He had another sack and forced fumble and made the key tackle on the goal-line stand. D-Law was the leader of a group that completely demoralized the Saints.

Ezekiel Elliott and elite defense form winning combo for Cowboys – Patrick Conn, WFAA Sports
A strong running game combined with a strong defense has been the team’s recipe for success in recent games.

The emergence of the NFL’s second best scoring defense at 18.6 points per game – behind only Baltimore’s 18.0 points per game – has allowed the Cowboys to get back into the hunt not just for a division title, but also put themselves in the conversation for making noise come playoff time.

While the defense has been a major reason, you cannot overlook just how important third-year running back and 2016 Rushing Champion Ezekiel Elliott has been. During the current winning streak of four games, Elliott has accounted for 667 total yards which comes out to 166.8 yards per game. Extrapolate that over a full 16 game season and you’re talking 2,669 yards and probably the league MVP.

Zeke has been able to take games over thanks in part to the recent addition of Amari Cooper who has opened things up on offense by giving opposing defenses another player they must account for. Elliott has ascended to the top spot on the rushing yards leaders list and has found paydirt in each game of the winning streak.

In 1993, the Cowboys had the league’s leading rusher and the 2nd ranked defense in points allowed.

They won the Super Bowl that year.

The Cowboys currently have the league’s leading rusher and the 2nd ranked defense in points allowed. pic.twitter.com/DEq0wXNEFX

Sunday is a day of rest and for the Dallas Cowboys. With no game on the docket, it’s time to just sit back, relax, and root for whomever we want that’s going to help the Cowboys chances to get into the postseason.

NFL Playoff Picture Week 13: Updated AFC, NFC Wildcard Scenarios and Predictions – Joe Tansey, Bleacher Report
While the Cowboys are off on Sunday, there is plenty of action around the league that has playoff implications.

Washington and Philadelphia could knock each other out of contention in two head-to-head meetings, with the first one coming Monday night at Lincoln Financial Field.

With Dallas taking control of the NFC East, the Redskins and Eagles could be stuck battling for a wild-card spot, and if the Eagles win Monday, they will be stuck behind the Vikings on head-to-head and the Seahawks on conference record.

Here are the updated standings with the Cowboys currently holding on to the #4 seed.

“I sorta feel sorry for the Green Bay Packers” …is something you will never hear me say.

If you’re having a bad day, here’s a clip of Aaron Rodgers realizing he is tied with the Browns. pic.twitter.com/lwDSxtcMWB

Cowboys Reinforcements on the Way, How Should Dallas Deploy Them? Sean Martin, Inside The Star

This Cowboys team is at a high point after winning four-straight games, but bluer skies are coming as some improved health is on the way.

Linebacker Sean Lee, Defensive Tackle David Irving, and Left Tackle Tyron Smith are the three most likely candidates to rejoin the Cowboys lineup in week 14. All three have been important starters at their respective positions, while also seeing their replacements perform well.

So which one is needed the most?

Smith has missed the shortest amount of time out of this trio of players, and also faces the least resistance to regain his starting job at left tackle. Elsewhere on the Cowboys offensive line, backups like Joe Looney and Xavier Su’a-Filo have done their absolute best in rescuing this season, but this won’t remain the case with Cam Fleming at LT. Though the standard set from a year ago for Fleming to live up to was low, the Cowboys veteran swing tackle has kept Dak Prescott upright in wins over the Redskins and Saints.

After the Atlanta debacle last year with Chaz Green, why isn’t anyone talking about how well Cam Fleming did filling in for Smith?

Cameron Fleming is the only starting LT to allow zero total pressures against the Saints this season. #CowboysNation #DallasCowboys

Cowboys address mystery man on Saints sideline – Mike Florio, ProFootballTalk
It’s so wonderful that the Cowboys were so in tune to what the Saints were doing that people would even suggest something fishy was going on. That has to make the coaching staff feel pretty good. But as for the mystery man on the sidelines…?

The Cowboys have explained the issue in this way: “It’s a member of the game day entertainment staff. He stands next to the ‘green hat’ who is the network TV person who works with the officials to coordinate TV timeouts. His job is to communicate to our internal video board people when a TV time out is coming and how much time is left in that timeout as they come out of a break. He does not stand in the team bench area. They stand just outside the bench area on that side of the field.”

Non-call on Jaylon Smith for lowering helmet shows rule enforcement still a problem – Lindsay Jones, The Athletic
If you’re looking for an actual complaint against the Cowboys, this one has merit.

The league has long resisted using replay for judgment call penalties, but it is probably time to consider extra help, whether from replay or from the officiating command center, on plays that involve player safety. This year the league has added the ability for officials at the command center in New York to eject players for post-play personal fouls, like with the fight in Buffalo last week when two players were tossed.

In the meantime, the league will keep enforcing the lowering the helmet rule with letters and fines instead of flags, and that’s not making anyone safer.

You be the judge, but this one seems pretty easy.

There’s a good chance Jaylon’s going to receive a fine for that one.

The NFL fined Dallas Cowboys running back Ezekiel Elliott $13,369 for placing both money and teammate Dak Prescott in the red Salvation Army kettle in their 31-23 win against the Washington Redskins on Thanksgiving last week, according to the NFL Network’s Tom Pelissero.

As much as the NFL may try to stop it by fining players, it’s not likely that the Salvation Army kettle celebrations will come to an end anytime soon in Dallas. Not only has owner Jerry Jones said he loves it, and has even offered to pick up the tab on any fines, but it’s drawing attention to a great cause.

What’s not to love about that?

Here is the TV map of the early games courtesy of 506 sports.

And here are the late games.

Of course, the game most concerning to Cowboys fans will be Monday night’s battle between the Redskins and Eagles.

Poll: Who are you rooting for in Monday night’s NFC East matchup between Washington and Philadelphia? – RJ Ochoa, Blogging The Boys
It’s hard to root for either team, but one choice has got to be better, right? Where are Cowboys fans minds at on this matter?

If you asked me which team I’m more concerned about for the Cowboys sake, it’s the Eagles not the Redskins. Philadelphia is a better overall team and for me the priority is eliminating them, even if that means keeping Washington step for step with Dallas through Week 13. That schedule of theirs definitely looks soft but there’s no way that the Redskins in their current form are capable of capitalizing on it in the way that our deepest fears and insecurities think.

While their schedule is more difficult, I’m with RJ on this one. The sooner they are out of the mix, the better I’ll feel. Hopefully, the Cowboys can deliver the final blow next Sunday.

What did you all think?