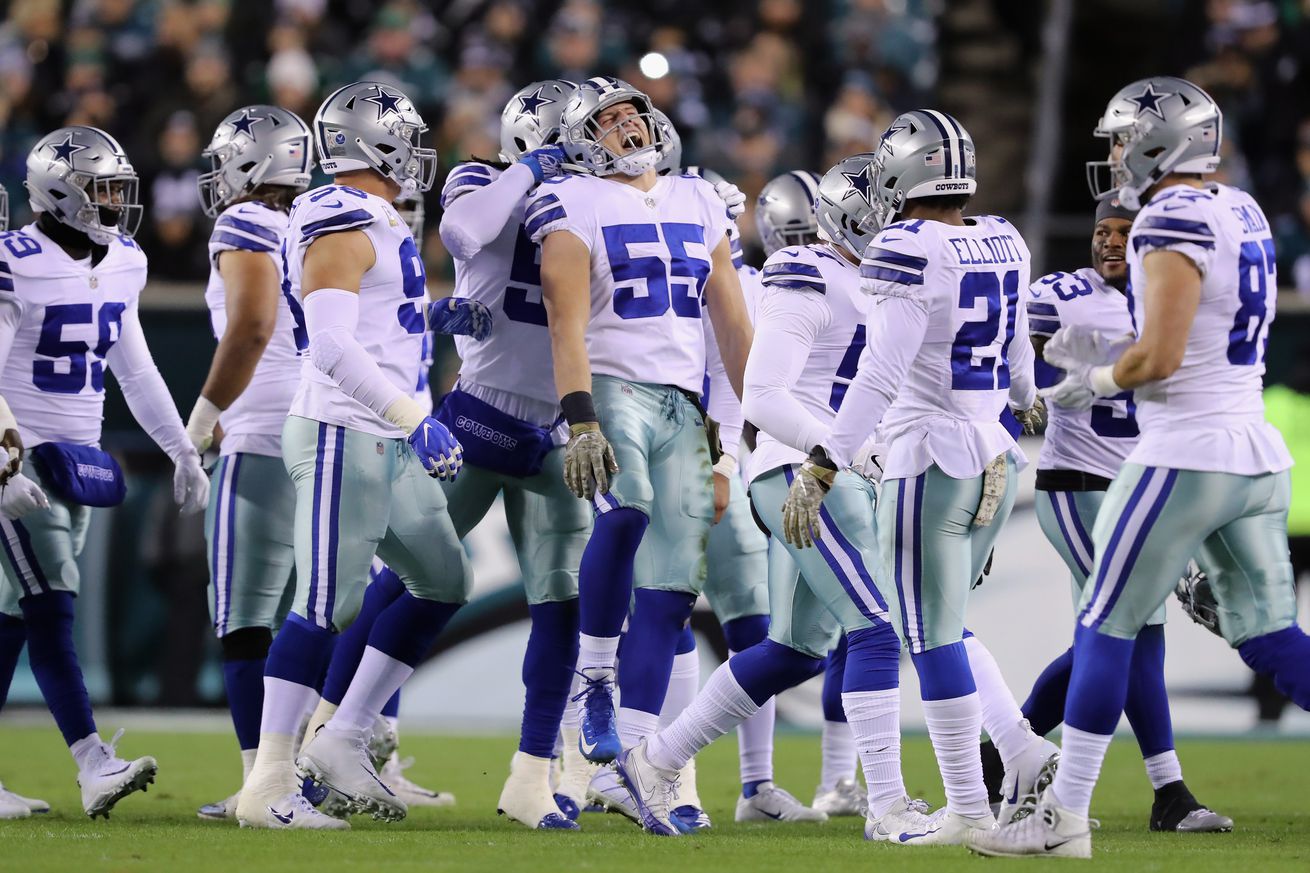 The Eagles are coming to town as well, so we look at them, too.

Dallas Cowboys: Travis Frederick confirms he won’t play in 2018 | Stefan Stevenson, Fort Worth Star-Telegram
The Cowboys have somehow survived and lately even thrived without All Pro center Travis Frederick. And it looks like that is how they will have to go the rest of the way.

“I feel very good about where I’m headed moving into next year,” Frederick said. “I’ve certainly made progress, but at this point in the season having not been able to do any football movements and things like that, even if I was 100 percent strength-wise, to be able to come back and play, I’m probably still six or eight weeks out.”

After being diagnosed with the immune disorder in August, Frederick at first responded well to treatment. He expected to be back on the field, which is one reason he remained on the 53-man roster at the start of the season. Guillain-Barre is a rare disorder in which a person’s own immune system damages their nerve cells, causing muscle weakness and sometimes paralysis, according to the Mayo Clinic.

“Early on, based on the progress immediately after the treatment,” he said. “Had the progress kept at that pace I felt like I would have been able to play. At this point, I think we’re too far behind.”

Dallas Cowboys: Film room: Why Connor Williams deserves to start over Xavier Su’a-Filo at LG for Cowboys | John Owning, SportsDay
Connor Williams has missed several games, but is healthy again. And this article makes a good argument for why he needs to get his starting job back for the stretch run.

Having said that, it’s time for Williams to regain the starting left guard position, relegating Su’a-Filo to the reserve role he fits best.

Many of you are probably asking: Why mess with a good thing?

Su’a-Filo’s appearance in the starting lineup is certainly correlated with an uptick in rushing production by the Cowboys offense; however, it would be foolish to believe that Su’a-Filo’s presence on the starting offensive line is a main reason for Dallas’ uptick in production. In fact, film review reveals that the Dallas offense has succeeded in spite of Su’a-Filo at times.

The Cowboys will stick with LG Xavier Su’a-Filo as the starter again this week even though rookie OL Connor Williams is healthy and ready to play.

Dallas coaches had started referring to him as “Wolf Hunter” during the draft process when he showed them a photo of wolves he’d hunted in Alaska with his father.

“It’s just fitting — there’s a reason they call me The Wolf Hunter,” Vander Esch said Wednesday ahead of Sunday’s game against Philadelphia. “Just rolling with it.”

Top 10 rookies: Vander Esch climbs and Mayfield falls – Denver Broncos Blog- ESPN
We think the Wolfbacker should be number one. But he’s climbing in these kinds of rankings.

Sometimes when you watch the game video, it’s easy to forget Vander Esch has made just seven starts this season — he has, however, been credited with at least 10 tackles in four of those, including the 13 he had in the win over Philadelphia last month.

“It was sore after it happened, but I really wasn’t that worried about it. I’ve had a foot injury worse than that before my second year, just pain-wise and feel. … I’ll be fine.”

Eatman: 3 Guys Getting Overlooked in This Run – Nick Eatman, DallasCowboys.com
This is a nice list (and could have been much longer) of under-appreciated contributors for the Cowboys this season. And the first name is so deserving.

1. Tyrone Crawford – For more reasons than one, Crawford deserves to be mentioned as one of the team’s best overall players. Not just for his play on the field, which we will get to in a moment, but also for the leadership he provides behind the scenes. Along with D-Law, Crawford has really established his vocal presence, both for the defense and for the entire team. But specifically on defense, the attitude seems to be that this is a unit that is fighting for respect and will do whatever it takes to get it. That’s basically Crawford’s personal mantra as well and he’s been fighting for that his entire career. But he’s not just a leader. Crawford is playing the best football of his life right now. He gets overshadowed up front by Lawrence, but only because of the sacks. Crawford is a presence in the middle of that line – a spot that has been hit hard by injuries. Through it all, Crawford has been a mainstay. He’s not only second on the team with 4.5 sacks, but ranks second in QB pressures with 22, only five behind Lawrence. That’s pretty amazing considering most of his rushes start in the middle of the line.

As Zach Ertz chases Jason Witten’s record, respect comes into focus – Tim McManus, Philadelphia Eagles Blog- ESPN
Did you know Jason Witten only gave away his jersey one time in his career? It was to Zach Ertz, who is coming to town on Sunday.

“Since I was 16, he was the guy that was always on TV, unfortunately, back in California,” Ertz said of Witten, “and he was the guy I was forced to watch. But at the same time, he was the perfect guy for me to watch because I was able to see at 16 years old how a tight end should play.”

The years since have sewn their stories together. A relationship was forged, a significant gesture was made and now Ertz is on pace to track Witten down in the record books. Sitting at 93 catches with four games to go, he is on track to eclipse Witten’s mark for most single-season receptions by a tight end at 110.

“He’s having a great year,” Witten said. “We all have points in our career where you just get in the zone. When I watch him on tape, I can tell he’s doing things the right way. He’s advanced as a route runner, using his stems, leverage, things like that to get open.”

Flip Side: What’s The Best Way To Handle Ertz? – Bryan Broaddus, DallasCowboys.com
Zach Ertz is just one of the Eagles’ weapons Dallas has to figure out how to handle, but may be the biggest concern.

Here’s something to keep an eye on: when the Cowboys have had success against Zach Ertz, it has been Byron Jones in coverage, back when he was playing safety. The question I have is, will this coaching put Anthony Brown or Jourdan Lewis on the outside, which would allow Jones to match up with Ertz in certain situations? I believe they have to treat Ertz like a wide receiver in order to best control him.

Can Rod Smith Help Lighten Ezekiel Elliott’s Heavy Workload? ✭ Brian Martin, Inside the Star
As the article notes, it is a little early to be strategizing for the playoffs – but having a plan to get Ezekiel Elliott a lightened workload has a lot of merit.

It should come to no surprise, but Zeke has rarely come off the field this season. He has already almost played as many snaps this year (694) as he did in all of his rookie season in 2016 (714). That means he’s taking quite a pounding as not only a runner and receiver, but as a pass protector as well. Each and every shot he absorbs takes a toll on his body.

The Dallas Cowboys would be wise to lighten Ezekiel Elliott’s workload a little bit moving forward, which is hopefully where Rod Smith comes in. He is #2 on the depth chart, but you wouldn’t know it by his usage and production so far this season.

First place on the line: 10 thoughts on Eagles-Cowboys – Shell Kapadia, The Athletic
Here is an excerpt from the enemy camp for the big game.

In the first game, the Eagles did a good job, allowing two sacks and six quarterback hits. When the Cowboys rushed four or fewer in that matchup, Wentz averaged 9.1 YPA and 8.4 yards per play. When they blitzed (21.7 percent of the time), Wentz averaged just 4.9 YPA (8-for-10 for 49 yards). The matchup between the Eagles’ offensive line and the Cowboys’ defensive line will go a long way in determining who wins this game. Overall, the Cowboys have produced sacks on 7.7 percent of their opponents’ dropbacks (eighth best). Monday night was the first time all season the Eagles got through a game without allowing a sack.

NFL viewership up 10 percent from Week 13 last year – Michael David Smith, ProFootballTalk
Another bit of evidence the NFL is not exactly withering on the vine – and of course, you know one team that was a big part of the gain.

The big winner in Week 13 was FOX, which saw its Saints-Cowboys Thursday night game draw huge ratings, and then big increases for both of its Sunday afternoon broadcast windows. The Vikings–Patriots game was the most-watched game of the week, with 23.2 million viewers. Monday Night Football on ESPN was slightly up from last year, while the Sunday night game on NBC and the Sunday afternoon game on CBS were slightly down.

NFL Panic Index: The Saints can be stopped after all – Sarah Hardy, Adam Stites, Charles R. McDonald, and Christian D’Andrea, SBNation.com
Are you tired of hearing just how the Cowboys shattered the invincible image of the Saints? Nope, me neither.

Then they scored just 10 points against the Cowboys. They could only muster 176 yards of offense, the lowest ever during the Brees-Sean Payton era in New Orleans. Brees, who looked off target all night, might’ve cost himself frontrunner status in the MVP race.

Even worse for the Saints is that the Cowboys might’ve given every other team the blueprint to stop the Saints’ previously unstoppable offense: Get after Brees and make sure no one’s open downfield. Brees threw for a season-low 4.5 yards per pass in the 13-10 loss.

Suddenly, the Saints went from the hottest team in the NFL to looking vulnerable, right in time for the playoff picture to start coming into focus.