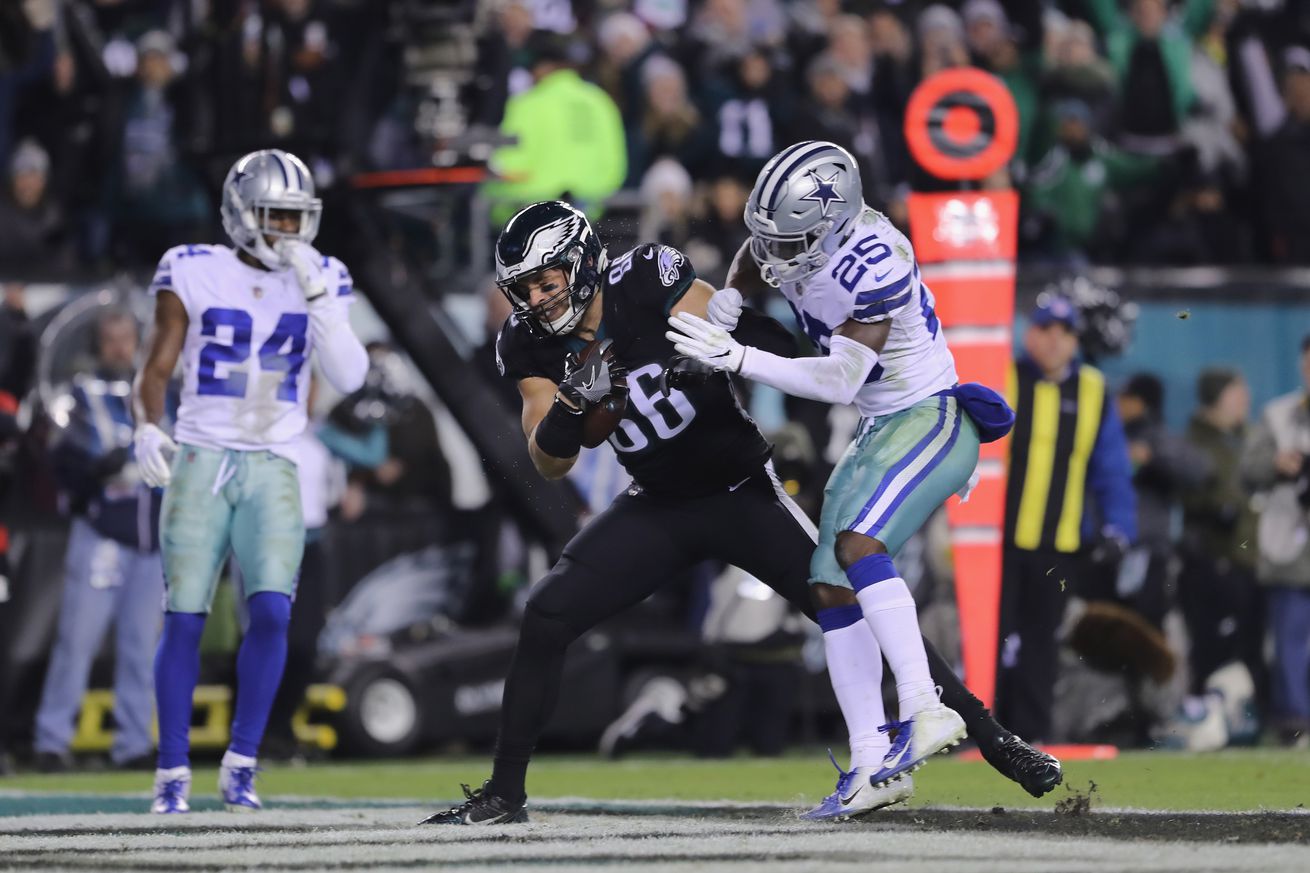 He is Philly’s go-to guy on third downs, and Dallas needs to put the clamps on him. But how?

It’s a big game for the Dallas Cowboys, as a win over the Philadelphia Eagles will make Dallas the prohibitive favorite to win the NFC East. A loss doesn’t knock them out of contention for the division or a wild card spot, but it makes things more of a 50/50 proposition. Conversely, the Eagles are going to be a bit desperate, since a loss at AT&T Stadium really hurts their chances to make the playoffs, especially since their next two games are against the Los Angeles Rams, with the best record in the NFL, and the hottest team in the league, the Houston Texans, currently riding a nine-game winning streak.

So both teams are going to try and use every weapon they have, while trying to stop their opponent. For the Eagles, the big gun is tight end Zach Ertz. He is second in the league in catches with 93, and is nearing 1,000 yards on the season. He is pretty much an evil version of Jason Witten, the guy Carson Wentz looks to when he needs a first down or a score. If Dallas can limit the damage he does, they likely win the game. The question is, just how do they do it? Our Michael Strawn and Tom Ryle devote their weekly give-and-take to the subject.

Michael: Funny you should bring this topic up Tom as there’s a growing chorus of voices suggesting the Cowboys should use their best coverage defender to put a clamp on Ertz; that is, Byron Jones should return to his role defending the tight end. Normally, I’d say you don’t mess with someone playing as well as Jones has this season. But then I remember Ertz catching 14 balls for 145 yards and two touchdowns last month against the Cowboys.

Dallas can’t allow that to happen again and I think the best way to prevent it is by putting the team’s best coverage defender on Ertz and following him all over the field from the first play to the final whistle. There’s several reasons why I believe this can work. First, Jones has the size to stay with tight ends not named Gronkowski; he proved that when he was safety. Second, as mentioned above, whatever the Cowboys did last time didn’t work. Third, the Cowboys other coverage guys (Awuzie, Brown, Lewis) are capable of defending the Eagles’ somewhat limited wide receiver corps. Jones is capable of making life very difficult for the Wentz-Ertz connection and it’s a move I’d like to see.

Tom: Obviously, they have to account for Ertz somehow. And normally I’d say putting Jones on him all game would be a good move. But three things make me demur.

First, the Eagles have a pretty effective group of wide receivers in Alshon Jeffrey, Golden Tate, and Nelson Aghulor. The Cowboys can’t let one or more of them get rolling while they focus on Ertz. That argues for keeping Jones in his accustomed role of basically taking away half the field, while Chidobe Awuzie and Anthony Brown handle the rest.

Second, Van Jaylon. The suddenly dominant linebacking duo of Leighton Vander Esch and Jaylon Smith are not just precision guided run-stopping missiles, they are incredibly fast and quite good in coverage. They are on the ascent, and can do a lot to stop Ertz.

And third, the Cowboys are using Jourdan Lewis in spot situations, and he has been outstanding of late. He was a key part of the win over the Saints, and show no fear facing whoever they put him on. Using him as a third-down specialist to keep Ertz from converting is also a very viable approach.

Michael: Bill Belichick is the game’s best coach. He has a simple theory when it comes to stopping opposing teams: you do whatever you have to do to take away their favorite option. If this means you need two, three, four guys….you use four guys. I don’t believe anyone, one-on-one, can stop Ertz. Whoever is guarding him is going to be getting help from the JayLeighton Vander Smith; those two will play a role no matter who the primary defender is. I just think Jones has proven to be one of the best coverage players in the league; use him to stop the opponent’s best weapon. Jones guarding Alshon Jeffrey (492 yards) or Golden Tate (less than 50 yards per game with Philadelphia) is somewhat of a waste of his skills. Add the fact the team struggled badly in the first matchup and it seems stubborn not to at least try.

Tom: I just go back to your comment earlier, that they shouldn’t mess with Jones because he is doing such a good job where he is. Now, that doesn’t preclude putting him on Ertz in some situations, like those third downs. He can still be a part of the solution, but I just don’t like locking him in on Ertz the whole game. And we can’t ignore how Tate has been a thorn in the Cowboys’ side in the past.

The fact is that the Dallas secondary has been very, very good during the win streak, and I think they are going to be better prepared to handle Ertz this time around. Add in the way they were pressuring Drew Brees in the last game, and I just don’t think they have to dedicate their best cover corner to him. They have other effective options, which is what I think we will see.

Michael: I like your idea about switching things up – sometimes employing the normal scheme, sometimes putting Byron on Ertz wherever he goes. That would allow the Cowboys to leverage Jones’ elite coverage skills at key times but also make it unpredictable and difficult for the Eagles to scheme against it.

I just hope we see some of these ideas and don’t simply line up in our usual form and expect to magically perform better against Ertz. It will be interesting to see how Garrett, Marinelli and Richard approach things.

Man, I am hyped up about this game – Sunday can’t come fast enough!