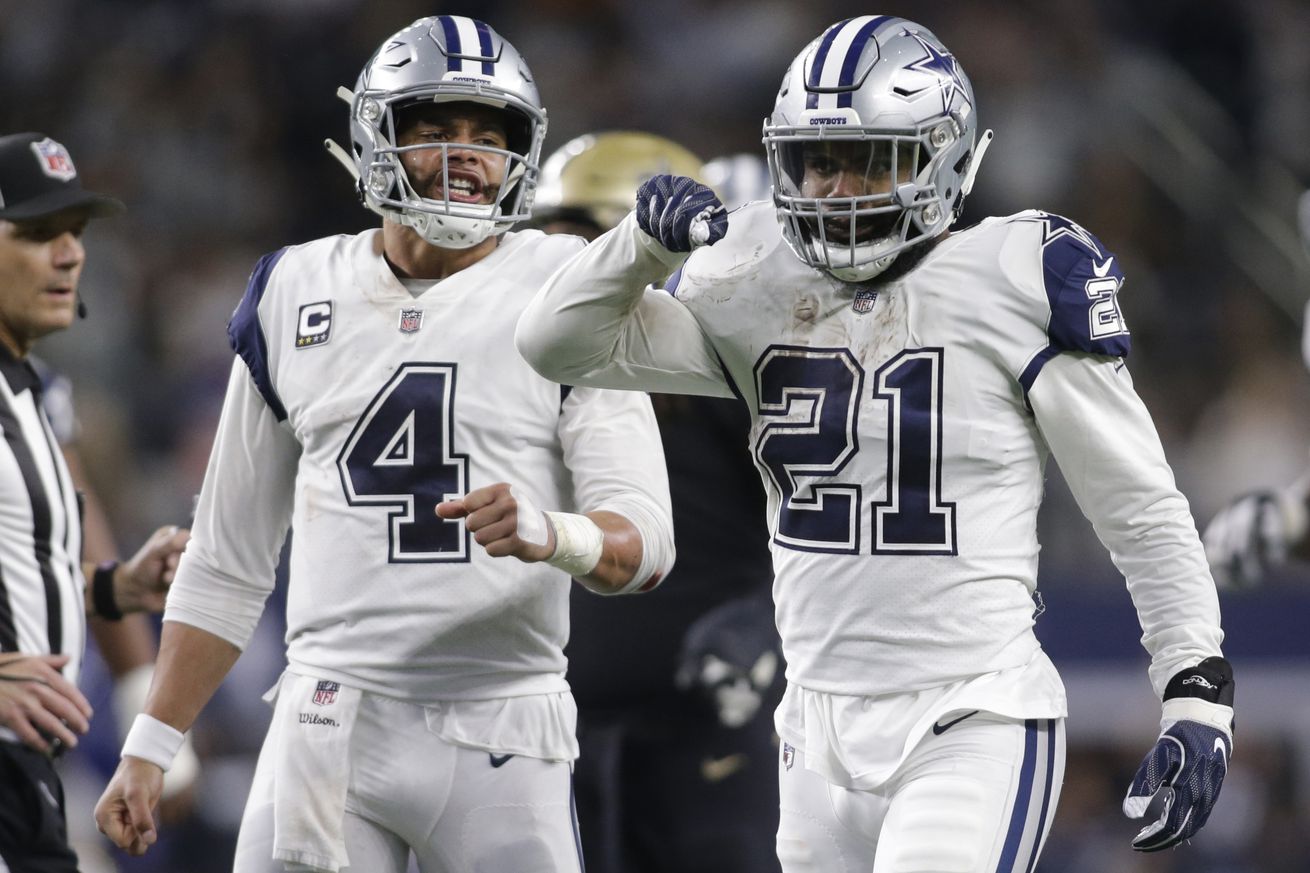 Do the Cowboys have enough talent to make it to the NFC championship? Defensively, yes – Kevin Sherrington, SportsDay

Breaking down how the Cowboys defense could carry them into the playoffs, and possibly the NFC championship.

Question: Do the Cowboys have enough talent to make it to the NFC championship game?

Sherrington: I’m pretty much on record about that. They’ve got to keep improving on offense. But the defense has been excellent, and getting better. Fans in this market remember the Super Bowl teams of the early ‘90s, and they think this one doesn’t match up. Frankly, no Super Bowl teams do. Those were great teams put together before free agency and salary caps. These days, you can only afford to be great on one side of the ball or the other, and competent on the other. I think that describes the Cowboys.

Cooper vs. Tate: NFC East might come down to which trade was better – Todd Archer and Tim McManus, ESPN.com

Which team made the better trade for a receiver before the deadline? Sunday’s game could tell the whole story.

In the span of a week in late October, the Dallas Cowboys and Philadelphia Eagles made trades they hoped would salvage seasons that were teetering on the brink of failure.

The Cowboys were 3-4 after their Oct. 21 loss to the Washington Redskins when they decided to send a 2019 first-round pick to the Oakland Raiders for Amari Cooper. The defending Super Bowl champion Eagles were 4-4 after beating the Jacksonville Jaguars in London on Oct. 28 when they decided to send a 2019 third-round pick to the Detroit Lions for Golden Tate.

On Sunday at AT&T Stadium, the Cowboys and Eagles meet with first place in the NFC East on the line.

Dak Prescott responded to Kamu Grugier-Hill’s “choking” comments, and does so with class and common sense.

After initially asking who the linebacker was (a question many Dallas fans also asked), Prescott then explained why he isn’t worried about the comment.

“You know, coach (Jason) Garrett has a great saying, and I don’t know where he got it from, but winners worry about winning and losers worry about winners,” Prescott said via Davin Moore of the Dallas Morning News. “We’re focused on ourselves in this locker room about what we need to do to get better in each and every phase of this game to be ready for this week.”

Not only did Grugier-Hill’s comments not making any sense, but it seems as if they also got him a stern talking to by his own head coach. Poor Philly.

Doug Pederson finally got to speak to the Philadelphia Eagles media regarding his reaction to Kamu Grugier-Hill’s comments that took center stage ahead of Sunday’s game against the Dallas Cowboys. Pederson did pull Grugier-Hill aside and talk to him, but had to make the message to his team loud and clear.

”First of all, the Philadelphia Eagles, myself, we have a ton of respect for the Cowboys,” Pederson said. “It has nothing to do with that, we have a ton of respect for [Cowboys Head] Coach [Jason] Garrett. He and I actually were in the league together at the same time, so we played against each other when he was with Dallas and I was with Green Bay, so we go back a ways.

”It’s unfortunate that the comments were made. I talk to the team a lot about how we don’t need to post anything that can be used on other teams’ website or bulletin board. It’s unfortunate that happened. We still have to go play. They have to play. It’s going to be a good football game.”

Jerry Jones reveals what he thinks will change the narrative of criticism for coach Jason Garrett – Brandon George, SportsDay

Jason Garrett has received a ton of criticism from Cowboys fans throughout his tenure as the Cowboys head coach. Brandon George breaks down what could change fans mind regarding Garrett.

Cowboys owner Jerry Jones said Friday morning on KRLD-FM 105.3 The Fan that there is one surefire way to change the narrative with coach Jason Garrett and remove the criticism he receives.

”We got to get some playoff wins. Jason needs a championship. We all do. Our fans do,” Jones said at the end of a long-winded answer. “We get that done and you’re going to be shocked at all of a sudden his record of coaching and his coaching qualities, all of a sudden become the most-noted thing about him, not lack thereof of playoff victories.”

Garrett’s job appeared to be in jeopardy after the Cowboys started 3-5 and their season was on the brink going into a game at Philadelphia. But since then, the Cowboys have won four consecutive games to take control of the NFC East.

It’s a big game for the Dallas Cowboys, as a win over the Philadelphia Eagles will make Dallas the prohibitive favorite to win the NFC East. A loss doesn’t knock them out of contention for the division or a wild card spot, but it makes things more of a 50/50 proposition. Conversely, the Eagles are going to be a bit desperate, since a loss at AT&T Stadium really hurts their chances to make the playoffs, especially since their next two games are against the Los Angeles Rams, with the best record in the NFL, and the hottest team in the league, the Houston Texans, currently riding a nine-game winning streak.

So both teams are going to try and use every weapon they have, while trying to stop their opponent. For the Eagles, the big gun is tight end Zach Ertz. He is second in the league in catches with 93, and is nearing 1,000 yards on the season. He is pretty much an evil version of Jason Witten, the guy Carson Wentz looks to when he needs a first down or a score. If Dallas can limit the damage he does, they likely win the game. The question is, just how do they do it? Our Michael Strawn and Tom Ryle devote their weekly give-and-take to the subject.

How can the Cowboys offensive line control the Eagles talented front seven? Bryan Broaddus of the mothership breaks it down here:

I believe Jim Schwartz’s game plan is pretty simple: force the Cowboys to have to pass with Dak Prescott and see if their offensive line can hold up well enough to protect him.

Schwartz is coming into the matchup with his secondary compromised by injury, so if the pass rush doesn’t get home, then his guys will likely pay the price — but it’s a gamble he has to go with. Other than what has happened to the Cowboys in the red zone and when they get near the goal line, the protection has been their next-biggest issue. As a unit, they’re on a record pace to surpass the sacks allowed total from 1986. What has been even more troubling for the offense is not when the sacks have occurred but the tendency for Prescott to not protect the ball when he’s hit in the pocket.

There are a ton of key matchups on the field this Sunday when the Cowboys take on the Eagles at AT&T Stadium. Which matchups will you be focused in on?

It’s pretty clear that Adams has ascended into his role as the Eagles’ top running back and that’s happened since the last time these two teams met. Adams has been running hard and has 42 carries for over 160 yards over the last two games. He has piled up a couple injuries during that stretch, but he’s going to be the guy again Sunday.

The Cowboys feature two young and athletic linebackers, but Vander Esch has really been the star. The first-round pick took over when Sean Lee went down with yet another injury and the Cowboys will never look back. He’s really good, but the Eagles have to stay committed to the run. I know I said Wentz needs to have a big game, but a balance will be an important part of that as well.

Feeding Zeke works? No kidding. If the Cowboys want to continue their win streak, they should continue to do so.

Once again, Ezekiel Elliott is the epicenter of the Cowboys’ offense — and they’ll need him Sunday to win over Philadelphia just like he did last month.

Elliott, who scored touchdowns rushing and receiving, gained 151 yards on 19 carries and caught six passes for 36 yards in a 27-20 victory. A victory Sunday against Philadelphia at AT&T Stadium would virtually clinch the NFC East title.

You can blame some of that on the Cowboys playing from behind in losses to Carolina (16-0), Seattle (17-3) and Washington (20-10). You can assign the rest of the blame to coach Jason Garrett and play-caller Scott Linehan for not ensuring Elliott had the ball as much as possible.