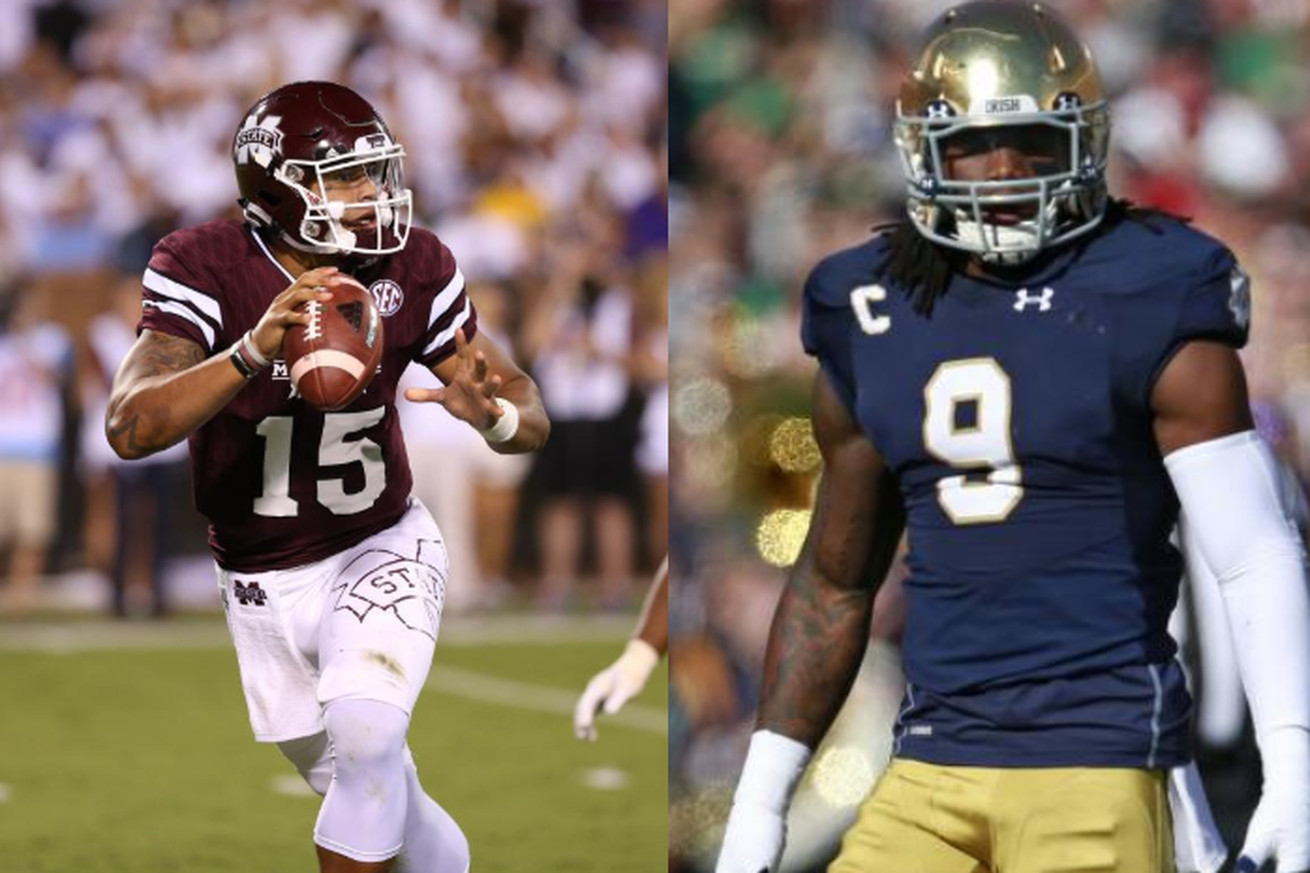 Earlier today, we posted part one of our two-part series on the best 10 moves by the Cowboys front-office over the past four years. If you missed it, go back and check out decisions 10-6 in our ranking.

Below, we list the top five decisions. These are decisions that have built the Cowboys for today and also helped build them for the future.

Note: These are player personnel decision so coaching moves are not considered, and let’s face it – we could almost come up with an entire top 10 list of those things alone. So, Kris Richard, Ben Bloom, and Marc Colombo – we still love you, just not in this piece.

After DeMarco Murray set the Cowboys franchise single-season rushing record with 1,845 yards in 2014, everyone wanted the team to re-sign him in order to keep the band together. Unfortunately, his cost was too high and he ended up getting a five-year, $40 million deal with the Philadelphia Eagles. Murray would have a disappointing season with the Eagles, only rushing for 702 yards before being dealt to Tennessee. And after two years with the Titans, Murray is now out of the league.

Now, this could be the part where we play six-degrees-of-DeMarco-Murray and talk about all the things that happened as a result, but were not going that route. The only things that matter here are (1) the Cowboys saved a lot of money by not re-signing him and (2) they got a compensatory pick for 2016. And that comp pick turned out to be huge as we’ll see later.

One of my favorite articles I’ve ever read is Peter King’s inside the war room of 2016 that gave us a lot of insight to what the Cowboys brain-trust was thinking that day. One of the things discussed was going after Memphis quarterback Paxton Lynch. The Cowboys had Lynch 12th overall on their board and was looking to pounce if he fell. Getting a quarterback to backup an often ailing-Tony Romo was important and Lynch was their top target.

The plan was to offer Dallas’s second-round and third-round picks, 34 and 67 overall, to teams in the late teens and early 20s—Indianapolis, Buffalo, the Jets, Houston—but then swap out the third-rounder for Dallas’s fourth-rounder, 101 overall, starting in the mid-20s. Cincinnati (24), Pittsburgh (25), Seattle (26), Green Bay (27) and Kansas City (28) all got called. Lukewarm responses, mostly. Buffalo (19) said no to the offer of the second and third. The Jets said no.

Garrett wanted to hold out for Connor Cook or Dak Prescott later in the draft so they could use those Day 2 picks to spruce up the defense.

The Cowboys kept trying to offer a second and a fourth, but everyone wanted a second and a third. Stephen Jones wouldn’t bite and the Cowboys couldn’t consummate a deal and when the Denver Broncos were able to pull it off, Jerry had regret.

“When I got up this morning,” Jones said Friday afternoon, “I second-guessed the hell out of myself for not giving the three. I have always paid a premium for a premium. So many times my bargains have let me down.”

Jerry will sure let you know it if he regrets something. We had to listen to him talk about how much he wanted Johnny Manziel over Zack Martin in 2014 and he also couldn’t resist talking about how he didn’t give up enough to trade for Paxton Lynch in 2016.

The Cowboys have drafted a lot of All-Pro players in the first-round during the Jason Garrett era, but all of them are on offense. That could be changing soon as they have a star in the making with Boise State linebacker Leighton Vander Esch. With the whole world expecting them to draft a wide receiver, the Cowboys were overjoyed to see Vander Esch still available when it was their turn to pick.

Vander Esch already has 103 tackles for the season. He also has two interceptions, both occurring during the Cowboys four-game winning streak. Vander Esch has great quickness and doesn’t allow ball carriers to escape those long arms. He does a great job diagnosing the play, shedding blocks, and stopping running backs behind the line of scrimmage.

Some people thought this was a super-reach because he was only a starter for one year in college. The upside for him was huge if he could replicate this level of play and based on what we’ve seen so far – that’s exactly what’s happening. His strong play, week after week has him making a serious push for Defensive Rookie of the Year.

You may think it’s a little premature to have him so high on this list, but when he becomes the first Cowboys player since Harvey Martin (1977) to win Defensive Player of the Year, we’ll agree that he’s not high enough.

It’s hard to go wrong with either of these guys and picking one over the other is like splitting hairs. Both are All-Pro’s and two of the best at their respective positions. Ezekiel Elliott was fast out of the gate, earning his All-Pro bid his rookie season after rushing for 1,631 yards and 15 touchdowns. Then it was Jalen Ramsey who emerged as one of the game’s best corners in just his second year in the league. With Zeke missing six games due to a suspension it was Ramsey that looked like the better pick last season.

With year three on the final stretch, Elliott has once again established himself as one of the league’s best offensive weapons while Ramsey has struggled at times. Both are still great players, but Ramsey has developed a reputation as a big trash talker, publicly criticizing other players in the league. Zeke, on the other hand, is a man of few words and let’s his play on the field do the talking. In fact, Elliott has shown great maturity this season and is seen as one of the clubhouse leaders.

But this isn’t a popularity contest; it’s about who’s the better pick for Dallas. And once again, coach Garrett was advocating for his guy on draft day.

On Monday, closed his office door and spent seven hours looking at every snap of Ramsey at Florida State in 2015, and every snap of Elliott at Ohio State in 2016. He liked Ramsey. He loved Elliott. Garrett told the Joneses he favored Elliott. So the group was solid as the clock ran down here for pick number four of the first round of the 2016 draft.

You can’t go wrong with either guy, but Elliott is right choice for a team that has build a strong offensive line as a foundation. The Cowboys have leaned heavily on Zeke this season and he hasn’t disappointed.

If you build it, he will run.

In the offseason of 2015, the Cowboys signed Greg Hardy to a one-year, $8.8 million deal, but lost DeMarco Murray (five-years, $42 million) and Jermey Parnell (five-year, $32 million) in free agency. The net result was a fourth-round compensatory pick (135th overall) awarded to the Cowboys in 2016. Typically, that’s nothing to get too excited about, but when a DUI caused Mississippi State quarterback Dak Prescott to fall to them, fans became intrigued. Prescott was player who was on our radar quite a bit leading it to the draft, however, none of us would’ve guessed what would happen next.

Prescott stepped up right away and tore up the preseason. But hey, that’s just preseason. Preseason turned to regular season when a back injury to Tony Romo forced him to miss time. Prescott carried his preseason success into games that counted and slowly and surely the worry of a shelved Romo started disappearing. So much in fact that when Romo was finally healthy, the Cowboys stayed with Dak.

Prescott had the best rookie performance of any quarterback in NFL history and in the process, sent franchise-leading QB Tony Romo into retirement. The Cowboys took a dead money hit, but ultimately saved quite a bit money in the long run. More importantly – the constant fear every time we saw our quarterback go to the ground, vanished.

We are now in year three of Prescott’s career and fans are conflicted. Dak has had some struggles at time as he gets rattled under duress and hasn’t been able to attack downfield as much as we would like. But he’s also a big time playmaker. In some ways, he’s taking us on a similar rollercoaster that Romo took us on when he came in the league. Some good stuff, some bad stuff, and every once in a while – he makes a play that astonishes us.

The cement is far from dry on what type of quarterback Prescott is going to be, but when you consider the team may have their franchise quarterback for the future, snagging him with a fourth-round comp pick is a gold star move for this organization. Some may not be sold on him yet, but the owner and head coach love him so we might as well buckle up and enjoy the ride.

#DallasCowboys quarterback @dak has been named our 2018 Walter Payton NFL Man of the Year nominee!

RT to congratulate him and help him win! @Nationwide | #WPMOYChallengeDAK

As a nice capper for our list, we present the following:

What if back in 2015 you told someone that all four of these college stars would be playing on the same NFL team. No way would they believe you. pic.twitter.com/ndtNGZQsts