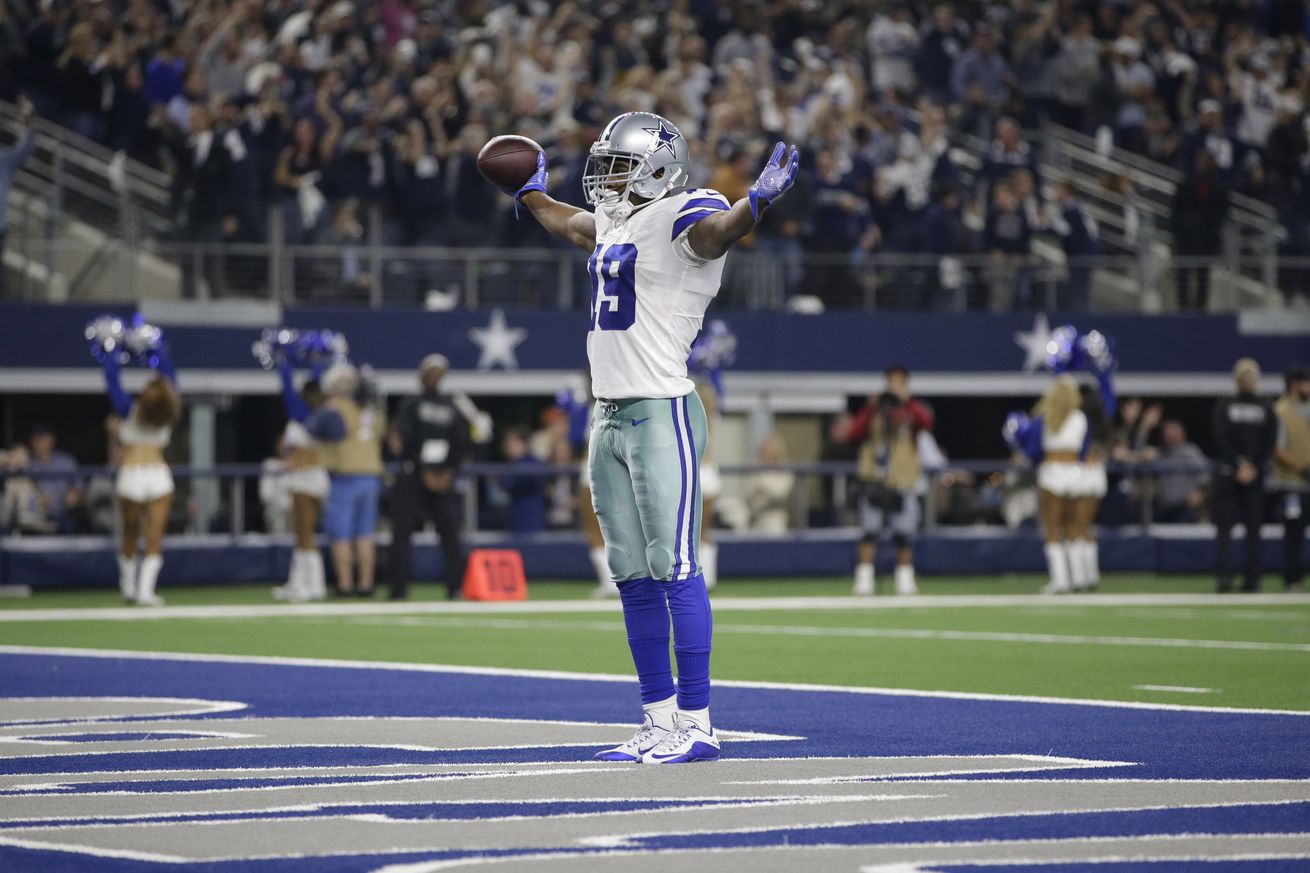 Amari Cooper has been well worth the first-round pick that the Cowboys gave up prior to the trade deadline. Well worth it. Maybe much more, too.

It’s easy to imagine what this Cowboys’ season would be like without Amari Cooper because we saw it for the first eight weeks of the season.

Opponents would stack the box to stuff Ezekiel Elliott while daring Dak Prescott, who was still struggling from his sophomore slump the previous year, to throw to his non-existent No. 1 receiver or a backup tight end playing the top spot. Presumably in this scenario, head coach Jason Garrett—he of one playoff victory—would be jettisoned on New Year’s Eve, and Dallas would enter a new era.

Cooper has changed all of that. The box is no longer stacked and Zeke is eating again. The other receivers are back in non-No. 1 receiver roles—the roles they should have been in all year long. And Cooper is playing like the 24-year-old stud receiver the Cowboys traded a first-round pick to acquire.

The Cowboys are always relevant under Jerry Jones, but they’re finally back to playing meaningful football in December again. And they have Amari Cooper to thank for that.

Amari Cooper: I know what I’m worth, and I know I can play football – Charean Williams, PFT

Don’t you worry, either — Amari knows he is good.

Cooper looks every bit worth the first-round draft pick the Cowboys gave up for him in an October trade with the Raiders.

“He is such a complete player for us,” Cowboys owner Jerry Jones said. “When you see him not make much, not have many plays, not have many targets early and then turn around and change the game like that, then you realize what kind of impact that he can have. So I’m proud for everybody out there. The first think I saw Dak smiling, ‘Boy, we like that [Cooper], buddy!’ So it’s a good feeling.”

Cooper caught 10 passes for 217 yards and three touchdowns, including the 15-yard game-winner in overtime against the Eagles on Sunday.

“I feel like that’s who I am,” Cooper said. “I feel like I can make those plays to help my team win. You know I did it in college a lot. In Oakland, I did it sometimes. But my whole goal is just to be more consistent and to be able to provide that type of play for my team every week.”

What. A. Win. It was not the prettiest, but the Cowboys pulled out a huge victory on Sunday afternoon, thanks in large part to the connection that Dak Prescott and Amari Cooper had in the fourth quarter and into overtime.

Prescott threw touchdown passes of 28 and 75 yards to Amari Cooper in the fourth quarter and another for 15 yards in overtime to give the Cowboys a 29-23 victory that moved them closer to winning the NFC East.

This game will not be remembered as one of Prescott’s best, even though he threw for a career-high 455 yards on 42-of-54 passing. But, it might be one of his finer moments.

Just as he did his rookie season when he beat the Eagles in overtime on a Jason Witten for a touchdown pass at AT&T Stadium, Prescott maneuvered the Cowboys down the field and faced third-and-7 from the Eagles 15, knowing he would be blitzed.

The Dallas Cowboys owner is probably still smiling all these hours later. Surrounded by his inner circle, perhaps sipping a glass of his favorite whisky or while being chauffeured around town by his driver, Jones is still basking in the afterglow of another “I told you so.”

When everyone was clamoring for a head-coaching change in Dallas, he stood pat, preferring to ride out a storm he was sure would subside. And when everyone crowed about him overpaying for Amari Cooper — “A first-round draft pick?!? — Jones ignored the noise, repeatedly stressing the price was more than worth it.

Well, guess what: He was right.

Remember when Eagles fans laughed, mocked, made fun of, and ridiculed the trade? We do!

If you want to have a whole lot of fun check out the comments on @BleedingGreen when they announced the Amari Cooper to Dallas trade.

Fun cause, you know, Amari went over 200 and for 3 TDs when he ended their season https://t.co/CyTZHUk9ns

5 thoughts from Cowboys’ huge OT win over Eagles: Amari Cooper has proved to be a season-saving acquisition – Jon Machota, SportsDay

Jon gives us his weekly five thoughts. Let’s give some credit to the other side of the football.

3. The Cowboys’ defense is elite. They’ve established it at all three levels. They’re not going to shut teams down every Sunday, not with the way the game is officiated nowadays. But they’re good enough to lead this team on a postseason run if the offense can take care of the ball and make a handful of key plays each game.

5. Brett Maher set the franchise record with his 62-yard field goal before half. He also made attempts from 28 and 21 yards. Although he missed from 45, the Cowboys probably don’t win this game without him. The same can be said of the Dallas tight ends, particularly Blake Jarwin and Dalton Schultz. They made some huge plays on the same day ESPN reported that Jason Garrett has attempted to talk Jason Witten out of retirement.

Dak Prescott’s response to his biggest day of the season is rather fitting of his performance in Cowboys-Eagles – Tim Cowlishaw, SportsDay

His third touchdown pass to Amari Cooper was the last play of a long game, one that gave the Cowboys a 29-23 victory over Philadelphia and firm control of the NFC East. His 54 throws produced 455 passing yards, not just absurdly high by his own standards (he had not thrown for 300 yards since last December) but tied with Troy Aikman for third highest on the franchise all-time list.

And yet when it was over, the word Dak Prescott came up with in response to his biggest day of 2018: “Thankful.’’

Dak Rallies In A Repeat Of 2016 Philly Win – Dave Helman, The Mothership

Did this battle with the Eagles remind you of a particular game? Helman points out some similarities with Sunday’s victory and the SNF win during Dak and Zeke’s rookie campaign.

It feels cliché to write that Dak Prescott had been here before – but this time it’s eerily accurate.

Two years and a few weeks after the fact, Prescott had once again overcome some early adversity to lead the Cowboys into overtime against the Philadelphia Eagles.

Then just as now, he was part of a crucial decision to go for it on 4th-and-1 in opposing territory, gambling to win the game. Back in 2016 it was Prescott sneaking the ball for the must-have first down, on Sunday it was Ezekiel Elliott’s turn to play the hero.

I’m on the field, so I can’t double check this. But:

There was a sequence in which both Zeke and Zack Martin left the game with injuries on consecutive plays. 21 returned, but Martin did not. Jerry provided an update during post-game.

The Cowboys’ All-Pro right guard is scheduled for an MRI Monday.

When Zeke left the game, it looked like he suffered a head or upper-body injury — and he was penalized. In fact, Elliott became the first offensive player to be called for the helmet-to-helmet penalty this season.

For the first time all season, an offensive player was penalized for the helmet rule. Officials threw a flag on Cowboys running back Ezekiel Elliott for lowering his head to initiate contact.

“We’re just making some calls here that are tough, but we’re doing it for protection and safety,” Cowboys owner Jerry Jones said. “That’s the biggest question being asked: How do you play?

“. . . I don’t won’t Zeke to stop punishing them on the end of his runs. Upon further review, they both tucked their heads. Zeke is a punishing runner. That’s what we want in the NFL. That is a physical aspect of football that we want to give our fans. I’ll certainly do everything I can to not make those kinds of things penalties.”

Elliott hit Eagles safety Corey Graham at the end of a 14-yard pass. Elliott appeared to get the worst of it, going into the blue medical tent and missing five plays.

Elliott said he briefly lost feeling in his arm.

This is pretty interesting.

Cooper was pressed about what kind of signal this was and he said it was a hand signal (he also jokingly said they’d now have to change it). It’s really great to see that Dak Prescott took control of the moment and trusted his receiver’s instincts, but it raises questions about Scott Linehan’s play-calling.

This touchdown came in the fourth quarter. It’s not like Cooper is expressing sentiments from the game’s first possession where things were still unknown (or at least more unknown). What would have happened had Dak Prescott not use his authority to adjust the route?

Thankfully we didn’t have to watch that play out but in an alternate timeline many BTBers are arguing about how Cooper should have indeed run a go. Again, give both Dak and Amari credit for the recognition, adjustment, and execution, but what about Scott?