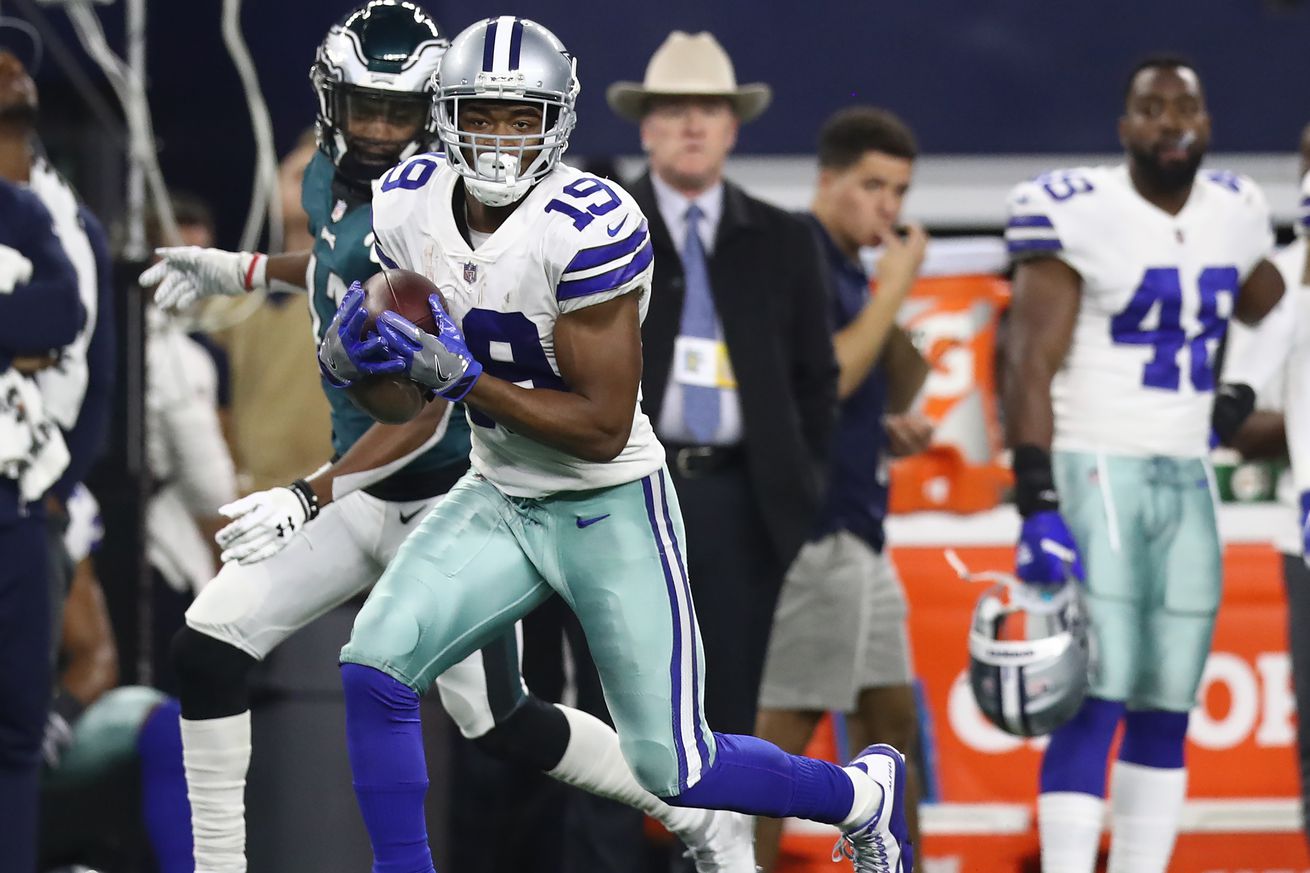 The numbers from the Cowboys win over the Eagles are simply amazing.

How do you give the ball away three times in an NFL game (against only one takeaway) and still come up with a win? While also drawing 11 penalties for 111 yards? It takes something pretty special. In the thrilling, exasperating 29-23 overtime victory by the Dallas Cowboys over the Philadelphia Eagles, they came up with not just one special thing. They had a bunch.

It was a remarkable performance. Let us count the ways.

He wasn’t worth a first-round pick, they said.

Yep, his best game ever (the three TDs are a record for him, too). And this is just the start of his Dallas career. (Memo to Jerry: Do. Not. Let. Him. Go.)

The debate about whether he was worth that 2019 first-round pick was already being drowned out by the crickets before this game. This puts an end to it. Without him on the field, this almost certainly would have been a loss for the Cowboys – and probably not a close one.

He is a receiver that can take over a game now.

Cooper’s 217 yards are the most yards by any NFL receiver this season, and the most receiving yards by any receiver since Julio Jones logged 253 yards against Tampa Bay (11/26/17).
Cooper and Michael Thomas are the only receivers this season to post two games with 180 yards.

Oh, and that first-round pick he cost just keeps sliding later and later in the round, too.

Just hit me. The Dallas Cowboys have gotten more out of their 2019 first round pick than any other team in the league has gotten out of theirs, when you think about it.

I observed in the third quarter that Dak Prescott was on the verge of giving this game away, all by himself. He threw two picks and lost a fumble.

And then he caught on fire.

Stop just a minute and look at that. 455 yards. This is the quarterback that has been so heavily criticized for not being able to put up big numbers, for struggling at times to even break 200 yards passing.

455 is rarefied air. That is the kind of number you expect from Patrick Mahomes or Jared Goff. But on this Sunday, Prescott bested Mahomes, who had 377 yards and two touchdowns. And we won’t even talk about Goff. Or maybe we will, since he was held to 180 yards and threw four interceptions against the Chicago Bears.

This is not to say that Prescott is as good as those two, game in and game out. But he is capable of putting up some impressive numbers when he has to. And don’t forget, the previous week he outplayed one Drew Brees.

Dak is still young. He was a fourth-round pick. Yes, he makes mistakes. But when that pressure comes on, he is one of the best there is. With less than three full seasons in the league, he already has 13 game-winning drives under his belt. And he has also etched his name in the team’s record books.

But it’s really all about the team.

Don’t forget the guy who has often carried this team on his back before, Ezekiel Elliott. All he did was touch the ball 40 times and put up 113 yards rushing (including one key fourth-down conversion in OT to keep the game winning drive alive) and 79 yards receiving.

The Cowboys had 576 yards of total offense vs the Eagles today, their most in a game since 1978 and the 4th-most in franchise history.

Today was the first time in team history the Cowboys had a 400-yard passer, 200-yard receiver and 100-yard rusher in the same game. pic.twitter.com/MURtATcHBN

And that’s not something that happens very often for any team, either.

Zeke, of course, has been doing it all season.

Ezekiel Elliott and Todd Gurley have traded the top spot in the NFL rushing race for three straight weeks. Elliott is back on top with 1,262 yards, 59 more than Gurley. Should be a run race to the finish.

He missed a field goal in the first half, but came back as time was running out before halftime.

That’s the LONGEST FG made in #DallasCowboys history and tied for seventh-longest FG made in @NFL history. pic.twitter.com/sjNXzt1nXG

I don’t want to look like I’m piling on Dan Bailey here, but it is clear that the team made the right decision in keeping Maher over Bailey. There is no doubt that the 62-yarder was beyond Bailey’s range. And without it, this game would probably never have made it to overtime.

Blake Jarwin had seven catches for 56 yards. Dalton Schultz three for 37. Not a big deal, you might say.

But those were career highs for both of them. OK, we’re talking really short careers so far, but more importantly is that, when you throw in Rico Gathers’ one catch (which lost a yard, but saved a much bigger loss), Prescott completed eleven passes to his tight end committee – which was every single ball he threw their way. And 92 yards from the position is certainly a level of production the team can live with.

It may not have been a record, but did you notice the time of possession in OT?

The Cowboys won the toss for the overtime, and of course elected to receive. The new OT is only ten minutes long. The Cowboys proceeded to mount an eight minute and five second drive on the way to the touchdown that ended it all.

And if they had not gotten the deflection off Rasul Douglas that Cooper took in for six, they would have kicked a field goal and left the Eagles with less than two minutes to respond. Sure, given the way Philadelphia marched up and down the field in scoring their last 17 points, that was certainly a risky proposition. But it would have just taken one stop. It certainly was an impressive drive, but using up so much time had to have been madly frustrating for the Eagles offense and staff. There was nothing they could do but hope for their defense to get a stop – which, of course, they didn’t.

There was another kind of first as well.

Yep. For the first time since it was adopted, the NFL rule on leading with your helmet was called against a ball carrier.

Entering Week 14, there had been 10 use of helmet penalties. Today’s call on Zeke Elliott was the first against an offensive player. https://t.co/grgCVd0J0A

I won’t go into how this was maybe a bad call, since there were some much more egregious errors both ways in this game. Although, let’s face it, the Cowboys probably benefited more than the Eagles overall with the odd decision on the fumble on the opening kickoff and the phantom offensive pass interference call that nullified a touchdown. That is balanced by Dallas having far more flags thrown on them for the game.

But why does this kind of thing always seem to involve the Cowboys? You might even wonder if, for some unknown reason, the league has a desire to target Zeke for meting out punishment. That’s just a silly idea, of course. Right, Commish?

The big picture, though.

The Cowboys have improved to 8-5 and swept the Eagles. They have a two-game lead over Philadelphia and Washington for the NFC East lead, and hold tiebreakers over both. Heck, they even shored up their wild card chances just in case (although that probably becomes meaningless next week). And even though this game was a lot harder than it should have been, it kept the five-game winning streak alive – now the longest win streak in the NFL.

Did anyone really give Dallas a chance to pull this off when they were 3-5? I will freely admit I was ready to start arguing about who the new head coach should be. Now, we all are wondering if this team can keep the winning going into January.

It was an incredible win, with a bunch of landmark performances. And it beats the heck out of losing. Right, Eagles?