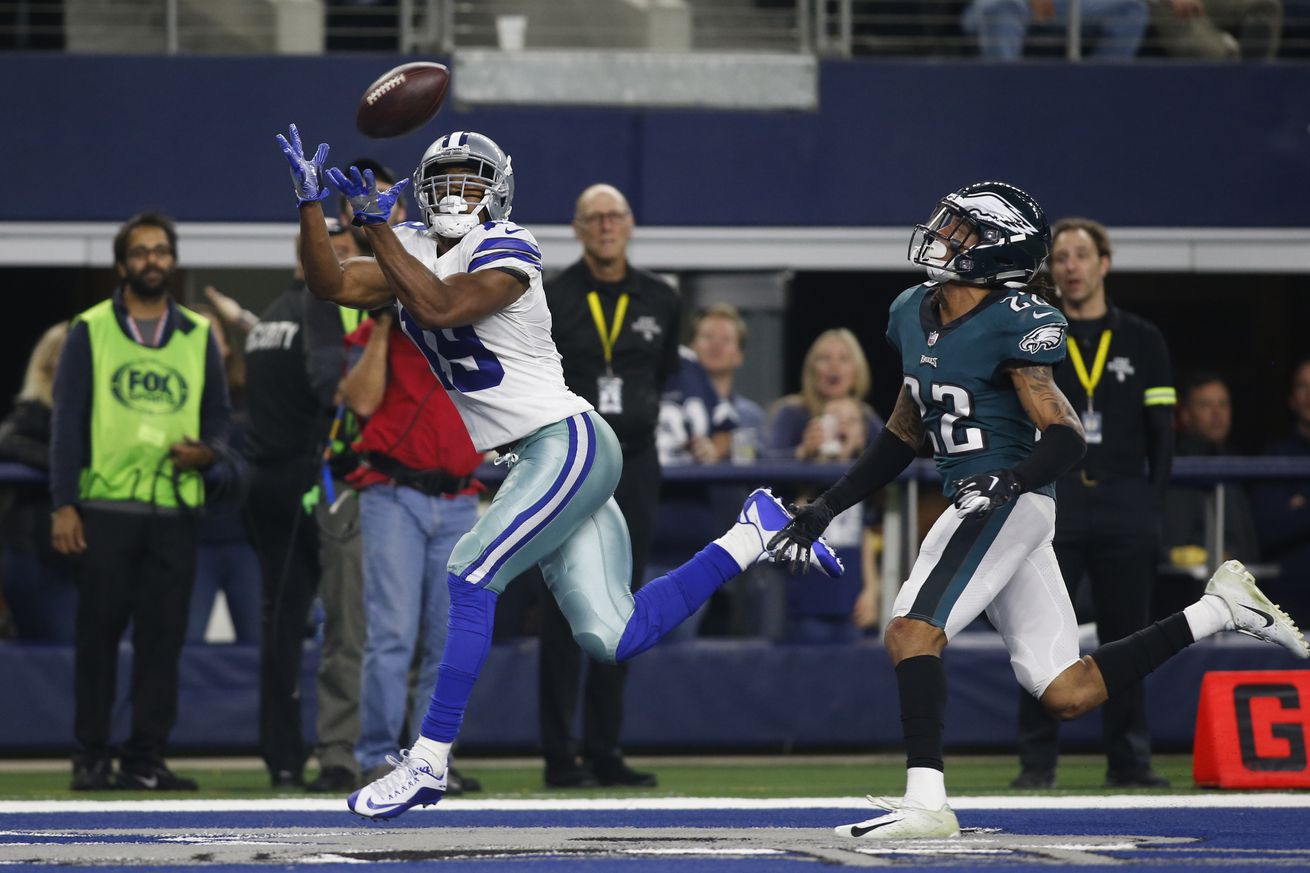 All the Cowboys news of the day.

Cowboys outlast Eagles and their own mistakes to plant NFC East flag – Bob Sturm, The Athletic
Sturm explains what has changed for the Cowboys to pull off a five-game winning streak against a very tough stretch of schedule.

Something has clicked, and their rise in self-belief and willingness to battle for three-and-a-half hours to grab another win has been more impressive by the week. That first road win in Philadelphia might have saved the season, but surely, they couldn’t do it twice. They did. What about Thanksgiving? Done. Well, surely the Saints would put an end to this. Negative. Yes, but you know how the Eagles respond to adversity! They will show you the heart of a champion.

The Cowboys have now figured out the third-down offense, undergoing such a dramatic shift that I can hardly believe it.

The improved third-down offense is a product of having Cooper to off-set the threat of Elliott. The Cowboys have converted more third downs than anyone in the sport since Cooper’s arrival and that margin over the entire NFL is actually growing. They have 43 third-down conversions over the last six games (since the trade) and nobody else in the NFL is over 36. They also have the second highest conversion rate. They have bounced from 29th to second. That is not a misprint! For the season, the Cowboys have jumped all the way to 12th in this category with only one month of competent third-down play. And to convince you even more of the corner being turned, here is the real convincing number: since the bye week, no team has converted more third downs through the air than Dak Prescott and the Cowboys, who have 30. So, yes, take your Saints, Chiefs, Rams, Patriots, or whichever team’s passing attack makes you jealous — since the trade, the Cowboys have moved the chains with their passing game more capably than anyone.

Jason Garrett takes a chance, and the Cowboys choke the Eagles – Calvin Watkins, The Athletic
Jason Garrett had the opportunity to put points on the board in overtime and hand the game over to his defense. He instead chose to be aggressive.

Earlier in the year, Garrett coached soft, especially in an overtime loss at Houston. Everything changed Sunday against the Eagles with so much riding on this. Garrett went for it on fourth-and-1 in overtime. He told offensive coordinator Scott Linehan to push the offense with deep passes. Even quarterback Dak Prescott took a chance, changing a play call in the fourth quarter for wide receiver Amari Cooper that eventually led to a touchdown.

This game was everything for the Cowboys and Eagles. A slow-moving first half turned into a high-scoring, eye-popping fourth quarter.

The Cowboys edged the Eagles, 29-23, in overtime, pushing themselves to a two-game lead in the NFC East with three games remaining in the regular season.

Garrett’s defense struggled in the second half, when it allowed 23 points and 186 total yards. In a surprise, it was up to Prescott and Cooper to turn the game around. It was a dramatic overtime touchdown pass, caught by Cooper off a deflection, that won it for the Cowboys with 1:55 left.

But it was Garrett going for it from the Eagles’ 19 that let the Cowboys know what this game was about.

On Sunday, Cooper recorded his second game this season with 180-plus receiving yards and 2-plus receiving TDs. He is only the eighth player in the Super Bowl era with at least two such games in a single season, and the first since Chad Johnson in 2006.

And if you think Amari Cooper only does good deeds on the football field, well, think again.

The day after his big game, Amari Cooper is out in Joshua, Texas. He’s helping surprise a military family with Sleep Number beds, partnering with Blue Star Families. pic.twitter.com/mYhwTXDo0M

Bears, Cowboys, Dolphins among big winners of crazy Sunday – Adam Schein, NFL.com
Like many an insta-pundit, Schein is re-evaluating his opinion on the Cowboys’ trade for Amari Cooper.

I never would’ve traded a first-rounder for the receiver back in October. A former No. 4 overall pick who’s still just 24 years old, Cooper looked shot in Oakland. And the Cowboys were 3-4 at the time, seemingly headed toward another blah campaign in the Jason Garrett era. Six weeks later, Cooper has scored six touchdowns while averaging 107 receiving yards per game and the Cowboys are sitting pretty at 8-5. The impact Cooper’s had on Dallas’ offense is undeniable, as is the connection he’s formed with Prescott.

Eagles blast ‘ridiculous’ call on opening kickoff – Kevin Patra, NFL.com
The officials were terrible Sunday – again. The game’s very first play featured a fumble that certainly appeared to have been recovered by the Eagles, yet somehow the Cowboys were awarded the ball.

Referee Clete Blakeman attempted to clarify the call to pool reporter Calvin Watkins of The Athletic after the game and was asked about it appearing an Eagles player had recovered.

Who knows how the game would have unfolded if the referees seen what most of the viewing public believed it viewed and awarded the Eagles the ball deep in Dallas territory. Maybe the early-game malaise doesn’t inflict Philadelphia. Maybe the flub forces the Cowboys to take more red-zone risks early, and they don’t settle for field goals, kick-starting a back-and-forth tilt.

If ifs and buts were candy and nuts we’d all have a merry Christmas. They aren’t. And the Eagles’ Christmas isn’t shaping out to be very joyous.

Do the Cowboys have a Super Bowl walk? – Todd Archer, ESPN
Jason Garrett shed some light on his decision-making when comparing the decision to go for it on 4th down in overtime against the Eagles – compared to choosing to punt against the Houston Texans earlier this season.

“If you watch the game and you feel the game, they dictate a lot of decisions,” Garrett said. “I don’t want to dredge up Houston but I think we stopped them nine straight times in Houston and we didn’t block them real well in Houston. … In this game, I think we had over 500 yards of offense and we’re driving the ball and had the ball for 45-plus minutes. It’s nice sometimes with the analytics guys, they sit up in a vacuum and say, ‘You should go for this. You shouldn’t go for it.’ But ultimately decisions are made by guys who are seeing the game and feeling the game and they’re executed by men playing the game.”

Ezekiel Elliott picked up a yard, and three plays later Cooper had the winning touchdown catch.

Let’s overreact to NFL Week 14 2018 – Tom Brady has won his last Super Bowl? – Dan Graziano, ESPN
Is it an overreaction to say Amari Cooper was the most important acquisition by any team this season? Graziano weighs in.

Graziano’s verdict: NOT AN OVERREACTION. Look, the Cowboys’ defense has been good all year. Cooper has nothing to do with that. And fundamentally, they still want to grind out yards with Ezekiel Elliott and control the clock the way they did for most of regulation Sunday. But before they got Cooper, they had no downfield threat in the passing game that scared anyone. Think what it has done for the team’s confidence to know they have someone to whom they can go in the passing game to make a big play for them. Even on the weeks when Cooper doesn’t go off for huge numbers, he’s a factor. The Cowboys have plenty of flaws, and if Zack Martin is out for a while it’s hard to see them making much noise in the playoffs. But it’s pretty clear now they’re headed there.

And That’s Why Dak is Cowboys’ QB1 – Nick Eatman, DallasCowboys.com
Sunday we saw Bad Dak and Good Dak – and according to Eatman that’s enough for him to be the team’s long-term answer at quarterback.

But Dak Prescott is the quarterback of this football team. He’s the starter right now. He’ll be the guy next year and probably has a really nice payday awaiting him in the future that will make him QB1 in Dallas for years to come.

If you’re asking yourself why, just watch the fourth quarter and overtime. That’s the player the Cowboys want under center, and in the shotgun, and handling the ball on every snap.

Yeah, you can have the first three quarters. You can pinpoint to badly-thrown interceptions, fumbles in the pocket and even the deep balls that aren’t completed.

But Jerry Jones won’t be looking at them. Oh, he sees it. He saw many of the plays that nearly cost the Cowboys this much-needed game against the Eagles.

But I’m sorry, they will get trumped. Trumped by the plays he did make – the ones that put the Cowboys in the lead, and then in the lead again, and then to win the game in overtime.

It’s as simple as the old “glass-half-full or glass-half-empty” debate. When it comes to his team, Jerry Jones and the Cowboys always seem to look at it being half-full.

And they’re not wrong. At least, in my opinion, they aren’t wrong.

Scout’s Notebook: Praising The Dallas DBs – Bryan Broaddus, DallasCowboys.com
As he does every week, the Broad One puts on his scouting glasses and shares his thoughts on the team’s performance.

On the game-winner to Amari Cooper: what a tremendous block by Ezekiel Elliott to give Dak Prescott just a split second more time in order to get the ball to Cooper. If Elliott doesn’t pick up Malcolm Jenkins blitzing through the “A” gap, then he’s right on top of Prescott — maybe even knocking the ball out of his hand. Prescott was able to account for Nigel Bradham on the other side, because he was right in his line of sight. Thus, he was able to get the ball over him.

Dak Prescott just took a slight peek in the direction of Michael Gallup before loading up and delivering the deep ball to Amari Cooper for the 75-yard touchdown down the right sideline. It was just long enough to hold Corey Graham in place to allow Cooper to separate. Cooper never lost sight of the ball and was able to adjust back to the inside to track it down.

The latter because it required a 62-yard field goal by Brett Maher going into halftime after Tyron Smith got called for offensive holding while the Cowboys were trying to get into a more realistic field goal range.

But honestly the Cowboys should be winning by more than this. They’ve completely outplayed the Eagles today. At halftime the Cowboys are outgaining the Eagles 233-70. The problem is how the Dallas drives at ended. A 10-play, 69-yard drive ended when Dak Prescott threw a pick to Rasul Douglas, who he completely missed because he was concentrating on Amari Cooper who was being covered by someone else. Then a 10-play, 52-yard drive (77 yards before penalties) ended with a missed 45-yard field goal by Maher. In my Upset Watch column for ESPN, I pointed out that the Cowboys are 31st in offensive DVOA in the red zone this year. Well, in the first half the Cowboys were in the red zone twice. One time stalled out, leading to the first field goal. The second time moved backwards with penalties, leading to the missed field goal.

The Eagles have had only four drives. The first one was seven plays, 36 yards, a good job of moving the football. But the next two went three-and-out and the fourth ended on a Wentz fumble when Tyrone Crawford pushed past Jason Peters and slapped the ball out of Wentz’s hand.

Dallas Cowboys right guard Zack Martin is expected to be available Sunday against the Indianapolis Colts.

Martin left Sunday’s game against the Eagles after aggravating the same knee injury that has plagued him for over a month.