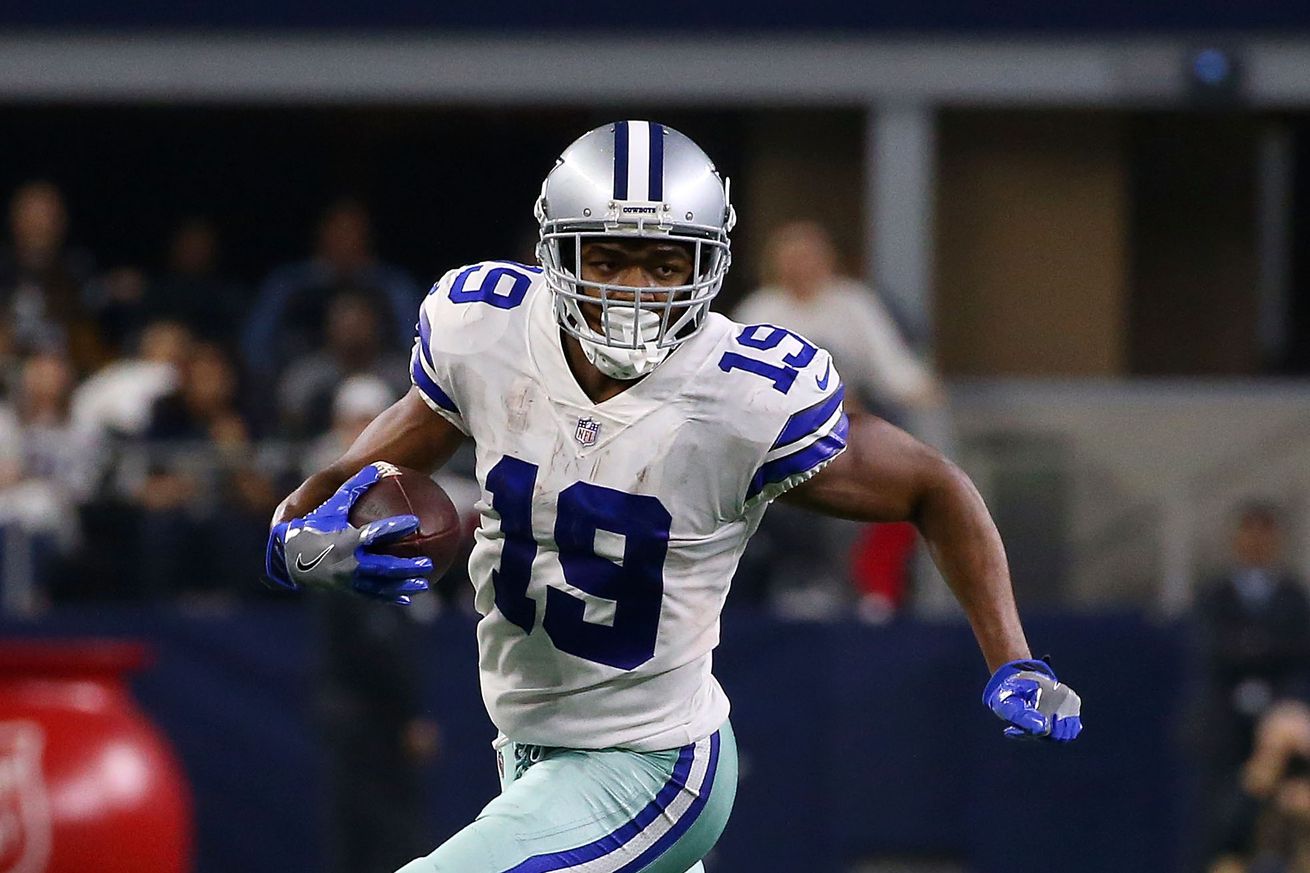 The Cowboys new star receiving is the gift that keeps on giving.

What a breath of fresh air Amari Cooper has been for the Dallas Cowboys as the team has won five of their six games since acquiring him in a trade with the Oakland Raiders. There are a lot of reasons to be joyful about the team’s new star receiver, but we’ve identified 19 of them to brighten your holiday season. Enjoy.

1. The offense is now productive

The Cowboys offense was in all sorts of disarray before Cooper showed up. Not only are the Cowboys winning games since he arrived, the offensive numbers have shown a significant rise.

Cowboys stats before and after the Amari Cooper trade pic.twitter.com/Zwl5rwVkJo

Maybe you’re tired of hearing Troy Aikman salivate over how great of a route-runner Cooper is, but it cannot be overstated. The ability to win one-on-one matchups held this team back as Dez Bryant was not getting the separation needed. Last season, Bryant had 132 targets, but had a career low 12.1 yards per reception. Cooper is averaging 16.1 yards per reception since joining the Cowboys, which is higher than Dez has ever had.

(@AmariCooper9) is a route technician. to the slant route is #PATIENCE #DallasCowboys

The Cowboys offense can now move the chains. Really well, in fact. After ranking 30th in the league in third-down conversion (31.9%), they have ranked secund over the last six games (49.4%) since Cooper’s arrival. And because of their new star receiver, they are doing it through the air better than anyone in the league. Anyone.

“Take your Saints, Chiefs, Rams, Patriots, or whichever team’s passing attack makes you jealous – since the Amari trade, Dallas has moved the chains with their passing game more capably than anyone”

Not only can Amari create separation with precision route-running skills, his wheels makes him very dangerous once the ball is in his hands.

5. He has good hands

Remember when people were saying he didn’t have good hands and how that should be something Cowboys fans should worry about? Well, that’s a load of crock. According to Pro Football Focus, only Michael Thomas and Adam Thielen have a better catch percentage among the top wide receivers.

It’s okay if you didn’t believe it at first. We’ve all made mistakes. Many of us were right there with you when we moaned and groaned about the Cowboys giving up too much to get him. Jerry Jones took a lot of heat for making this trade as it looked like a panic move, but the more time that passes, the smarter Jerry looks. Yes, first-round draft capital is pricey, but there is no way they’d be able to get a talent like this with a late 2019 first-round pick.

Would you rather have Amari Cooper, who has 40 catches for 642 yards and six touchdowns in six games, or the 25th overall pick in the first round? With their 8-5 record, the Cowboys are presently giving up pick No. 25 in the first round to the Oakland… https://t.co/JZ2shQjRKe

7. He’s one of the better trades ever

Between the great Herschel Walker train robbery or the big Tony Dorsett trade, the Cowboys have been on the good end of some of the league’s most lopsided deals. And those deals have resulted in Super Bowl trophies. But when news broke of the Amari deal, some immediately started dredging up old memories of the Roy Williams and Joey Galloway trades. It’s safe to say that this deal is far more favorable for Dallas than those blunders and before it’s all said and done could go down as one of the best moves this team has ever made.

I’ve always believed the trade I made for Tony Dorsett was one of the greatest trades in NFL history. At the risk of being too reactive the trade Jerry Jones made for Amari Cooper could end up being right up there. I loved it for Dallas when it happened, it looks even better now.

The addition of Cooper has jump-started this Cowboys offense, including bolstering the passing stats of his new quarterback. After Dak Prescott failed to reach 200 yards passing in four of his first six games, he’s been over 200 in every game and is now averaging 285 yards a game with Cooper on the team.

Before Cooper showed up, the recipe for stopping the Cowboys offense was simple – stop Ezekiel Elliott. In fact, in Zeke’s six worst rushing outputs for his career where he’s been held under 70 yards, three of them happened early in the year without Cooper. Teams like Houston, Carolina, and Washington (in the first game) shut Elliott down, holding him to 54, 69, and 33 yards respectively. The Cowboys lost all three of those games.

Not only was Elliott having trouble running the ball, but he also wasn’t much of a factor in the passing game. With defenses always closed in, there just wasn’t much space for him to roam.

But all that changed with the arrival of Cooper as defenses now have to worry about the explosiveness that 19 adds to the team. Elliott’s numbers have jumped significantly, adding 20 more yards a game to his rushing totals as well as another 30 yards as a receiver. The addition of Cooper has essentially added 50 more yards a game to Elliott’s production. That’s a pretty sizable jump.

Not only is Amari Amari, but he also makes Zeke 50 yards better. That’s big jump. pic.twitter.com/9m4jkxJsAQ

Zeke is reaping the rewards of the Cooper trade and he knows just how valuable his new teammate is.

Ezekiel Elliott said he didn’t know what to expect when Cowboys initially traded for Amari Cooper. But once Cooper came to practice?

10. He completes the circuit

It was only four years ago when Cowboys fans were excited about the new triplets of Tony Romo, Dez Bryant, and DeMarco Murray. But just like that all three of them are gone and the Cowboys have a new trio of young stars at those positions. And they aren’t wasting any time working well together. In just their sixth game together, they achieved a franchise first – they had a 400-yard passer, 200-yard receiver, and a 100-yard rusher in the same game. And unlike the triplets before them, this new trio are all 25-years-old or younger.

Jason Garrett places an emphasis on bringing in the “right kind of guys” to his football team as it’s these types of players that are capable of maximizing their ability and playing to their full potential. That’s why unsexy picks like Zack Martin, Byron Jones, and Leighton Vander Esch aren’t met with excitement at first, but then it’s soon discovered that these guys will give you everything they got.

Cooper is another guy who fits that bill. While he’s soft spoken and a man of few words, his maturity and work ethic make him a great player to coach. A day after his amazing performance against the Eagles, he was out in North Texas helping Blue Star Families spread some holiday cheer.

The day after his big game, Amari Cooper is out in Joshua, Texas. He’s helping surprise a military family with Sleep Number beds, partnering with Blue Star Families. pic.twitter.com/mYhwTXDo0M

Coopers numbers since joining the Cowboys would prorate to 106 catches, 1,712 yards, and 16 touchdowns over a 16 game span. That would make him statistically the best receiver in the league, better than Julio Jones (29), Adam Thielen (28), Michael Thomas (25), and Davante Adams (26), who are all having big seasons. But all those guys are older than Cooper (24). Even with his slow start in Oakland this season, no receiver younger than him has more yards or touchdowns than Cooper.

The Cowboys are stingy with their draft capital and don’t make trades like this frivolously, but when they have a chance to get a talented, high-character player who’s still so young – they go for it.

People applauded the Philadelphia Eagles for getting Golden Tate at the low cost of just a third-round draft pick, whereas the Cowboys front office panicked going after Cooper.

Cooper’s sticking around because Dallas has around $50 million in cap space next season. They wouldn’t have dealt for him if they didn’t have intentions of re-signing him long-term. The Eagles, on the other hand, are projected to be around $12 million over the cap and are going to have to make some cuts somewhere. That doesn’t bode well for them to be able to match offers for Tate when he hit’s free agency in a few months.

No playoffs for Philly? Third-round pick – gone. Now, tell me again which team made the better trade?

There’s so much to love about Cooper, but delivering the final blow to the Eagles NFC East chances is icing on the cake. The feeling of Eagles fans across the country can be described perfectly by the reaction of defensive back Rasul Douglas.

15. Just needed a change of scenery

There was some concern that Cooper just wasn’t as good as he looked after two Pro Bowl seasons in Oakland because his numbers started declining. Well, they’re back and they’re spectacular.

Alabama has had some star receivers coming out of college over the years, but only one holds the schools receiving records. It’s not Julio Jones and it’s not Calvin Ridley.

On the Cowboys big 75-yard touchdown play, Cooper was supposed to run a stop route, but didn’t like the call because the defense was sitting on that route all day. He tried to get Dak to change it in the huddle, but he didn’t. Fortunately, Dak took his advice and changed his mind at the line of scrimmage. Wise decision.

The subtle audible: @rjochoa reported on Amari Cooper’s comments post game that Dak Prescott had given him a hand signal to run the 9 route on his 75-yard touchdown reception. pic.twitter.com/DG2EtIST8D

The Cowboys have had some remarkably talented wide receivers on the team over the years. The legend of the 88 lives strong with Drew Pearson, Michael Irvin, and Dez Bryant. Even recent Hall of Famer Terrell Owens put up big numbers in a Cowboys uniform. As remarkable as these players all were, the per-game numbers Cooper is putting up this season since joining the Cowboys are better than any season from any of these Cowboys greats.

If you had Cooper on your fantasy team this week, there’s a good chance you’re advancing to the semi-finals.