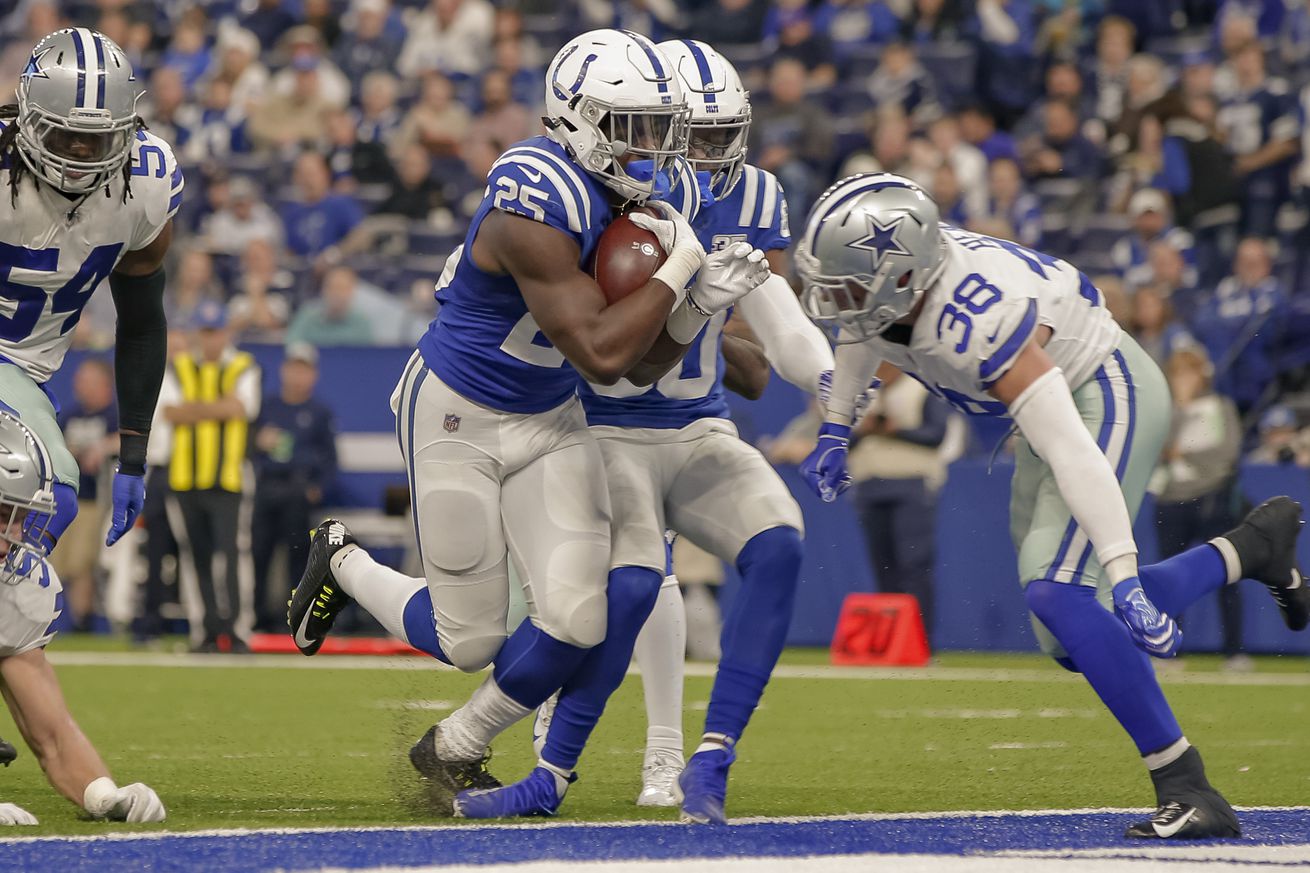 Plus the other news of the day…

Why Cowboys defensive tackles and linebackers had their worst performance of the season – John Owning, SportsDay
A look at the film to help us understand why the Cowboys’ usually stout front seven got obliterated by a mediocre Colts’ rushing offense.

Most of the blame for Dallas’ struggles against the run can go to its defensive tackles and linebackers.

For some reason, when Sean Lee is active, Leighton Vander Esch performs below standard. Prior to Sunday, Vander Esch’s two worst performances came against Washington in Week 7 and Tennessee in Week 9 — Lee was active in both contests.

Fast forward to Sunday, and Vander Esch had another forgettable performance while Lee was active. Vander Esch finished with eight total tackles, but he was slow to diagnose, easily fooled by play-action, bad in coverage and struggled to get off blocks. Though he didn’t receive much help, Vander Esch had an uncharacteristically poor performance.

Unfortunately for Dallas, the rest of the front seven performed similarly, as the defensive line failed to get off blocks, making it easy for the Indianapolis ball carriers to get to the second level of the Cowboys’ defense, while Jaylon Smith struggled to quickly diagnose Indianapolis’ run concepts.

On top of struggling to get off blocks, the defensive tackles were flat-out getting dominated at the point of attack, as they were routinely displaced out of their gap.

The Morning After: Cowboys walk right into trap game, fall meekly – Bob Sturm, The Athletic
The Sturminator weighs in with his thoughts on a lackluster performance he pretty much predicted last Friday.

But there are times where you are beaten so soundly by the desperate team across the field that it seems disingenuous to pick out one or two people for blame. No; this, like many victories, was a total team effort where most everyone had a hand. From top to bottom, from stem to stern, the Cowboys were smacked back down to earth by the Colts and humbled in a way that they clearly did not see coming. Now, given that this isn’t my first rodeo, the script now dictates that the post-game voices will suggest that a loss at this time of year can do you good. It may bring you down a peg or two, allow you to recollect your thoughts, and realize that nothing has been accomplished so far. The Cowboys could then use this as the sole motivation to close the deal on their playoff pass by smacking down Tampa Bay next Sunday and we can then forget this forgettable trip to Indianapolis ever happened.

But all that comes next week. For now, we simply must talk about the most disappointing performance the Dallas Cowboys have put together in a long time.

When this squad wins, we champion the complementary football they played; how these pieces and styles fit and work together. When they lose, complementary probably isn’t the right word — but the poor defense and the poor offense that Dallas put on the field on this occasion certainly looked like they might be brothers from a similar mother.

Graziano’s verdict: NOT AN OVERREACTION. The Cowboys still should win the division. They need to win only one of their remaining two games to do it, and even if they don’t do that, they still could get in if Washington and Philly each lose one more game. But a division title at 9-7 (or 8-8!) and a first-round playoff exit might not be enough to convince the Cowboys not to make changes. The sense around the team since training camp has been that a playoff run — not just a playoff appearance — was what Garrett needed to guarantee his return. It’s possible that has changed, but the way the season goes from here will determine the taste ownership has in its mouth when it comes time to decide.

The problem is that once the Cowboys are behind, things snowball in a hurry.

Elliott ran the ball just five times in the second half after getting 13 carries in the first two quarters. Prescott finished with 39 passing attempts and the pass-heavy Cowboys attack didn’t do much of anything against the Colts.

Linehan’s decision-making in the second half only exacerbated the problems.

Facing a fourth-and-1 situation in Colts territory, Linehan opted against giving the ball to Elliott and instead called a pass play that was knocked down across the middle of the field. There are 16 times Elliott has been given the ball on fourth-and-1 in his Cowboys career, and the Colts’ first-half stuff is one of just three times it didn’t end with a first down.

Even worse than that, Linehan dialed up a screen pass to Allen Hurns in the fourth quarter that went for 9 yards when the Cowboys were facing a fourth-and-14.

It’s one thing to keep an offense on track when everything is going according to plan. But Linehan has shown that when the Cowboys aren’t able to follow the script, his inability to adjust has been a liability.

What Lessons Can This Team Learn From Indy? – David Helman, DallasCowboys.com
Jason Garrett isn’t buying the idea that Sunday’s loss was somehow a positive by providing the team with a wake-up call.

The narrative was formed before the locker room had even cleared out on Sunday.

Having lost, 23-0, to end a five-game win streak, several Cowboys players framed the loss as a silver lining. Perhaps it was good to be knocked down a peg or two heading into the final two weeks of the season.

Coming off his review of the game film, it’s not necessarily a viewpoint Jason Garrett shared with his team.

“I don’t really agree with that assessment,” said the Cowboys’ coach on Monday. “We didn’t do what we needed to do as a team to win the game. Give them credit. They played very well in all three phases. We didn’t play well enough. We didn’t earn the right to win that game and we have to live with that, we have to learn from that.”

The Cowboys Still Have a Dak Prescott Problem – Danny Heifetz, The Ringer
On the other side of the internet it’s Dak Prescott who’s in the sights of those looking for an easy solution to a complex problem.

There’s a certain irony to Dallas’s late-season renaissance. Even with the loss, the Cowboys have a 95 percent chance of making the playoffs and a 94 percent chance of winning the NFC East. Yet the team has gotten there by being the biggest guppy of their division—the Giants were also shut out on Sunday, and Washington is on its third quarterback—and seems ripe to be eaten by a bigger fish in the playoffs. Despite this, owner Jerry Jones has already said he’ll extend quarterback Dak Prescott, whose contract is up after next season, and a division title would likely extend head coach Jason Garrett’s tenure, too. The Cooper trade seemed like it changed Dallas’s fortunes, but in truth it may have provided just enough of a boost—which coincided with a collapses in Philadelphia and Washington—to cover for the ineptitudes of Garrett and Prescott.

Perhaps a playoff run in January will prove the Jones family right and the Cooper trade will mark a new chapter in Cowboys history. But as of now, Dallas still looks like the same team it was in October. And if the Cowboys re-up their quarterback-coach combo this offseason, they are likely going to continue to get the same results.

Don’t Forget These 5: Olawale Drops Walk-in TD – Staff, DallasCowboys.com
When you lose by 23 points it’s hard to isolate a handful of plays where things went sideways but the staff over at the Mothership does their best.

Zeke stopped for 3-yard loss – On the Cowboys’ first drive of the game, the offense was on the move, converting first downs by both rush and pass. After a 9-yard pass to Cole Beasley, the Cowboys had second-and-1 from the Colts’ 27. However, Zeke was dropped for a 3-yard loss right in the middle of the line. That led to a third down where Dak’s deep ball to Allen Hurns was incomplete. On fourth down, the field goal attempt was blocked and that seemed to set the tone for the day. But that second-down loss is where it began.

Olawale drops sure TD – This play likely won’t be forgotten, but needs to be included considering how much the game changed afterward. On third-and-1 from the Colts’ 3 early in the second quarter, the Cowboys had fullback Jamize Olawale wide open in the flat for a walk-in touchdown. Dak made sure to loft the ball and create a soft pass but it still couldn’t be corralled by the fullback, who dropped it, wasting a chance to score. On fourth down, the Cowboys were stuffed and Zeke even fumbled the ball.

Scout’s Notebook: Lapses In Coverage – Bryan Broaddus, DallasCowboys.com
As always, the broad one puts his scouting cap on and gives his thoughts on the Cowboys’ performance against the Colts.

That was the worst that I have seen this Cowboys defense tackle in at least five weeks. The night they defeated the Saints might have been their best game, but this outing against the Colts was the exact opposite. It’s usually a bad sign when you see a missed tackle early in the game like the one that Chidobe Awuzie had on Marlon Mack that resulted in a 19-yard gain. Awuzie did everything but finish the play. He rallied to the spot and was in perfect position — but for some reason Mack just burst right through him. Awuzie wasn’t alone. Byron Jones also had issues that led to some significant gains for the Colts.

Cowboys suffer inexplicable letdown loss in Indianapolis – Calvin Watkins, The Athletic
The Cowboys seemed flummoxed by the Colts’ strategy to play two high safeties but according to Watkins the team had prepared for the scheme, just couldn’t beat it.

“We knew they like to run that two (safeties) high shell,” Cooper said. “Hard to get those big plays when teams have those types of coverages. It’s really no excuse. We knew what they were all about. We just didn’t go out there and execute.”

During this five-game win streak, the Cowboys were a productive team on third down. Sunday they converted just 4-of-12 and went for it a season-high five times on fourth down. It seemed as if Garrett was making decisions with the aggressive zeal of a coach in the midst of a playoff game.

You can question the Cowboys targeting Olawale, who has caught two passes all year, on that third down. It would seem giving the ball to Elliott in these situations should work. But the fourth-down play failed, as the Cowboys got no blocking up front and Elliott never had a chance.

Sunday’s loss delayed the inevitable, but the Colts exposed doubts that already existed about the Cowboys – David Moore, SportsDay
The team’s well-documented red zone woes had been irritating annoyances during the team’s five-game win streak; they became debilitating obstacles against the Colts.

The Cowboys have been held out of the end zone in 10 of their last 12 quarters — not counting the overtime period against Philadelphia — because of glaring shortcomings in the red zone.

Only two teams entered the week worse than Dallas when it came to scoring touchdowns on plays inside the opponent’s 20-yard line. They were San Francisco and the New York Jets.

The Cowboys had a first down on the Indianapolis 12-yard line on their second possession. On third-and-1 from the 3-yard line, fullback Jamize Olawale dropped a pass that should have been a touchdown.

Ezekiel Elliott was stopped for a loss of 2 yards on fourth down and fumbled, ending the team’s best scoring chance of the day.

“Unfortunately, we weren’t able to convert on the third-down play,” coach Jason Garrett said. “Then we felt good about going for it on the fourth down. They did a better job than we did. They won the line of scrimmage.