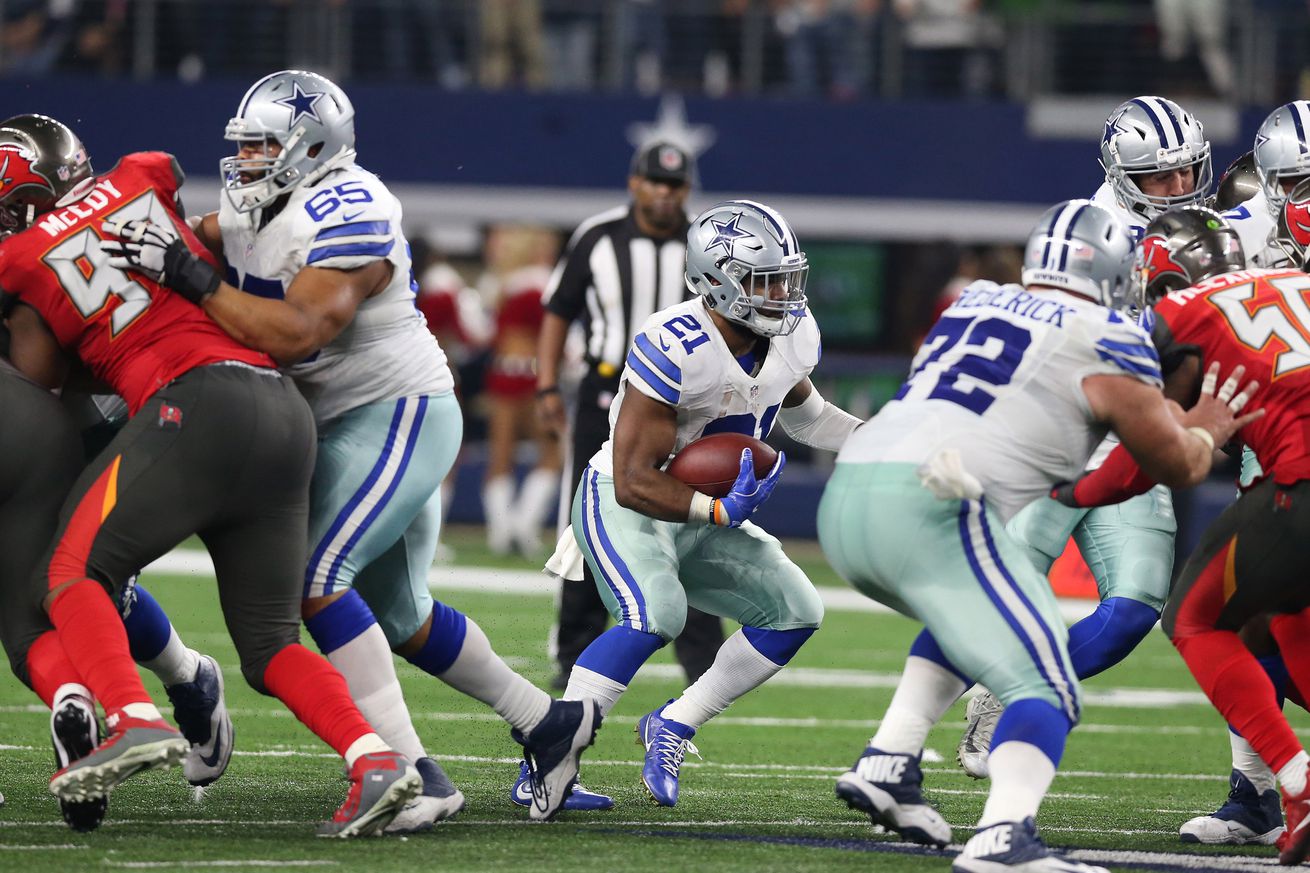 The Cowboys have some serious issues in the red zone but they hope to correct them in second chance to wrap up division this week.

What’s Stalling The Offense In The Red Zone? – Rob Phillips, Dallas Cowboys
This Cowboys team has been one of the best red zone offenses in the past few years. What caused this to change and is it correctable?

Through 14 games, the Cowboys rank 31st in red zone efficiency. They’ve scored touchdowns on only 44.2 percent of their trips inside their opponents’ 20-yard line.

It’s a stark difference to the past two seasons when the offense ranked third in 2016 (66.7 percent) and sixth in 2017 (59.6 percent) despite running back Ezekiel Elliott’s six-game absence on the NFL’s Reserve/Suspended list.

“So really our big challenge as a staff and as a team offensively is having guys take up some specific roles down there and giving them the opportunities to do that,” Linehan said. “But we’ve had some opportunities that we didn’t execute very well, and that tends to put you in a position where you feel like you’re pressing a little bit. And I think they’ve just got to go play and let it loose a little more down there.”

Cowboys biggest issue for a deep playoff run? Red zone problems – Michael Sisemore, Blogging The Boys
The Cowboys haven’t been very good in red zone offense, will that end any hopes at a long stay in the playoffs?

The Cowboys only had one red zone trip in last week’s loss to the Colts and it ended with a fumble. Only one other time this season has an opponent held the Cowboys to a single red zone opportunity, it was week one against the Panthers. For what it’s worth, that drive ended in the only points the Cowboys scored on the day. Dallas has had no problems moving the ball between the 20’s but somehow everything shuts down when they enter the red zone. Just how bad has it been for the Cowboys?

Well, the Cowboys have had 43 trips to the red zone this season, that ranks 20th in the league. Dallas has only scored 19 red zone touchdowns (44.7%), only the San Francisco 49ers are worse in red zone percentage. Even if you look at total red zone scoring including field goals, the Cowboys are 31st with 82.9%. The Cowboys also join the Steelers as the only two playoff teams with four red zone turnovers.

The Cowboys are committed to solving red-zone issues after shutout loss – Clarence Hill, Fort Worth Star-Telegram
Cowboys OC Scott Linehan and many players are motivated by the offense getting shout in last week’s loss to fix their issues in the red zone.

Quarterback Dak Prescott blamed the problems squarely on execution and said he could use his legs an option more, in addition to Elliott.

“We’re not executing the way we need to execute plays,” Prescott said. “You saw last week a couple of those were just pure miss executions from our standpoint. We have to find a way to do better regardless of what it is. If it’s using my running ability or giving it to Zeke more, whatever it may be we have to find a better way to get in the end zone.”

Dak Prescott’s legs are weapons, but the Cowboys aren’t using them enough – Connor Livesay, Blogging The Boys
When Prescott has success running the football, the Cowboys win games. Why aren’t they using his legs more?

So far in his 46 games in the NFL, Dak has scored 17 rushing touchdowns but he has yet to rush for more than one touchdown in a single game. In those 17 games when he rushes for a touchdown, the Cowboys are 14-3, outscoring their opponents 498 to 335. The Cowboys best win of the season was their 40-7 win against the Jacksonville Jaguars. While the Jaguars have struggled this season and are by no means the team they were in 2017, their defense is still legit. In that game, Dak rushed 11 times for 82 yards and a touchdown on the ground. In every game this season that Dak Prescott scored a rushing touchdown, the Cowboys are 4-1 (JAC, PHI, ATL, WAS), the only loss coming in week seven.

The Cowboys would be wise to get Dak Prescott more involved in the running game in these final two weeks of the season, and more importantly into the playoffs. Of course the Cowboys will be putting Prescott at risk when asking him to run the football, but one thing Dak has done consistently over his football career is stay healthy. It’s also no secret that Ezekiel Elliott is one of the more dangerous runners in the NFL, so even just the threat of Dak running can open things up for Zeke, and vise versa.

One of the Cowboys’ biggest strengths has been anything but this season – David Moore, SportsDay
The Cowboys identity has been built by having one of the fiercest offensive lines in football but they have struggled this season, having to replace guys that are irreplaceable.

A rare immune disorder has kept the Pro Bowl anchor at the center of the Cowboys offensive line from taking the field.

The Pro Bowl guard has dealt with a sprained left knee for longer than he cares to acknowledge. The Pro Bowl tackle has dealt with a stinger, tendinitis in his elbow and a rash of penalties of late because – wait for it – the coaching staff believes he’s too dominant. None of this takes into account a college tackle making the transition to guard in his rookie season, the veteran lineman who lost sight in one eye for 24 hours or the position coach fired eight weeks into the regular season because things just weren’t working out.

Put it all together, and what was regarded as one of the team’s greatest strengths entering the season has been anything but.

Zack Martin back at practice for Cowboys – Josh Alper, ProFootballTalk
After missing his first career game last week, Zack Martin was back on the Cowboys practice field in a limited fashion.

Cowboys right guard Zack Martin missed the first game of his NFL career last Sunday because of a knee injury, but he took a step back toward the lineup on Thursday.

Martin returned to practice for the first time since he was injured in Week 14. There’s no word on his participation level at this point, but the team’s injury report will bring that information later in the week.

After working on the side Wednesday, Pro Bowl right guard Zack Martin was back on the field during the brief open portion of Thursday’s practice.

A Win against Tampa Bay on Sunday Earns Cowboys NFC East Title – Staff, CBS DFW
The Cowboys can’t dwell on last week’s loss with everything still in front of them. It’s simple, beat the Buccaneers and wrap up the NFC East.

Ezekiel Elliott and the Dallas Cowboys failed in their first attempt to win the NFC East by losing to Indianapolis when the Colts badly needed a win for their playoff chase.

Now the NFL’s leading rusher and his teammates will try again Sunday, this time facing an opponent with nothing on the line a week after Tampa Bay was eliminated from postseason contention with a loss in Baltimore.

“I think everyone in this locker room understands how important this game is,” Elliott said with Dallas coming off the franchise’s first shutout loss in 15 years . “I think it would be kind of beating a dead cow to come in here and harping on what happened last week.”

Take 2: Cowboys try to wrap up NFC East, this time vs Bucs – Schuyler Dixon, Stltoday.com
Take 1 to wrap up the NFC East was a complete disaster for the Cowboys but now they get a second-chance to clinch on Sunday against Tampa Bay.

Moving the ball wasn’t a problem for the Cowboys in the first half of the 23-0 loss to Indianapolis, but they squandered several scoring chances. A defense that has carried Dallas most of the season had the bigger letdown in the second half.

The Cowboys can win the division with another loss if Washington and Philadelphia lose. They don’t want to go there.

”Guys were excited to get back there and get rid of that last game and kind of build from scratch and kind of build our swag back,” said cornerback Byron Jones, who was voted to his first Pro Bowl this week. “I know we’re going to come out feisty and fierce.”

Flip Side: The Bucs WR You Don’t Know About – Bryan Broaddus, Dallas Cowboys
The Bucs are eliminated from the postseason but they still have powerful pass-catchers for these Dallas defensive backs to contend with.

Adam Humphries might not be the best slot receiver that Anthony Brown has faced this season, but I have a sneaky feeling about him in this game. Humphries is the Buccaneers’ version of Cole Beasley. He’s short and crafty which makes him difficult to defend. He’s similar to Beasley in how he executes his routes. There is plenty of work underneath, with that occasional shot down the middle of the field working inside. Humphries is one of the more sure-handed receivers the Buccaneers have on their roster. He is generally not a high target player, but when they’ve gone in his direction he’s come up with some clutch receptions.

Michael Gallup thinks the Cowboys ‘definitely’ have advantages on the outside vs. Tampa Bay – Tyler Dragon, SportsDay
Gallup likes the Cowboys’ chances against the Tampa Bay secondary.

“Respectable defense, they play a lot of man but they’ve been switching to a lot of zone lately. It’s a good defense but I don’t think we should have a whole of problems with them,” Gallup said. “[Amari] Cooper on the outside, me on the outside and definitely [Cole] Beasley on the inside and then [Allen] Hurns, definitely.”

Statistics back up Gallup’s claim. Tampa Bay has the 27th-ranked pass defense in the NFL, giving up an average of 259 passing yards a game. Couple that with the fact that quarterbacks have a 111.1 rating going against a leaky Bucs secondary.

Dak Prescott, QB, Dallas Cowboys: Prescott had his worst game with Amari Cooper last week. It’s weird, the Cowboys trolls have kept their mouths shut this week. This is why you need to shoot your shot when the getting is good, kids. Prescott should rebound here against the Bucs who rank 28th in total defense and 30th in scoring defense. You’re always going to run the risk of this turning into a game where Zeke runs for 180 and scores three touchdowns, too. So, chill out Cowboys fans. The point is, the matchup is great for Dak.

Blake Jarwin, TE, Cowboys: Jarwin has become a go-to guy for Prescott over the last couple of weeks. He has 11 receptions for 101 yards over the last two weeks. He seems like the kind of guy who would have been a Danger Zone favorite in years past. Shout out James Koh.